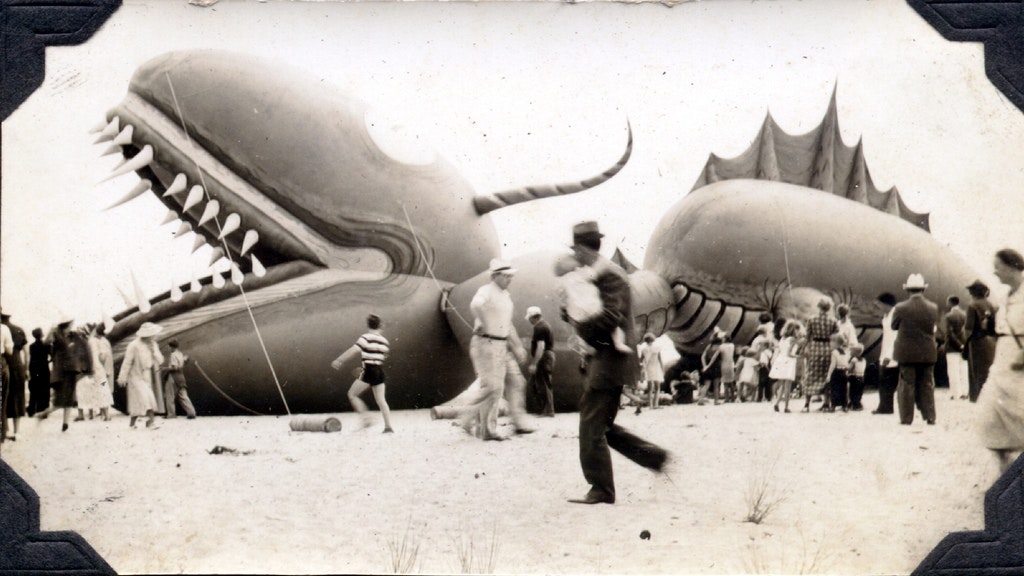 In the summer of 1937, stories started appearing in the local papers of Nantucket carrying photographs of giant footprints found on a local beach. With the region of New England's long history of sea-serpent sightings, rumours quickly began to circulate reporting that, at last, one of the elusive creatures had come ashore. Copies of the photographs were even sent for scientific analysis, though Dr. W. Reid Blair, director of the New York Zoological Society, was sceptical:

No marine mammal could have left the tracks as they do not move so much on their flippers as they do on their second joint and on their bellies. Evidence of their passage would be seen on the beach only in a slight indentation. As for a land mammal, there is nothing on Nantucket Island that could leave such large tracks.

A few days later, however, a gigantic creature was indeed spotted on South Beach. People came flocking to investigate but instead of the long awaited New England Sea Serpent they found something quite different - although most definitely a serpent of some kind, it turned out to be of the inflatable balloon variety.

The whole thing had been an elaborate publicity stunt by the puppeteer Tony Sarg (pictured in the centre of the last picture below), hoping to get Nantucket in the news and no doubt drum up a bit of business for the shop he had in town, Tony Sarg’s Curiosity Shop. The installation was a great success and stayed for several weeks on the beach before it made its way down to New York City to star in Macy's famous Thanksgiving Day Parade. Sarg had made his name (earning him the accolade, "father of modern puppetry") orchestrating similar inflatable installations for Macy's over the preceding decade, as well as at the 1933 Chicago World's Fair. Unfortunately for Sarg, his economic fortunes began to decline toward the end of the decade as other puppeteers began to compete more competitively. He ended up going into bankruptcy in 1939 and died 3 years later due to complications arising from surgery on a ruptured appendix.