Dante's epic 14th-century poem the Divine Comedy - with its dazzling descriptions of all manner of hellish and heavenly scenes - has proven fertile ground for many artists over the centuries, including the likes of William Blake, Gustave Doré, and Salvador Dali. One of the most impressive attempts to render the verse into visuals comes to us in the form of the illuminations found in an Italian manuscript produced only 125 years or so after Dante completed his poem in 1320. Dated to between 1444 and 1450, the illuminations vary in style due to the fact that two separate artists worked on them, with the first two sections of Inferno and Purgatorio being drawn by the lesser known Priamo della Quercia (active 1426-1467), while the Paradiso section was illustrated by Giovanni di Paolo di Grazia (ca. 1403-1482) who contributed 61 illuminations in all. The work has belonged to Alfonso V, king of Aragon, Naples, and Sicily (1396 – 1458) and his great grandson Ferdinand, Duke of Calabria (1488 – 1550), who donated the manuscript to the convent of San Miguel in Valencia in 1538. It was later bought in 1901 by Henry Yates Thompson, a collector of illuminated manuscripts, and was donated to the British Museum in 1941. Here below are a few choice selections. 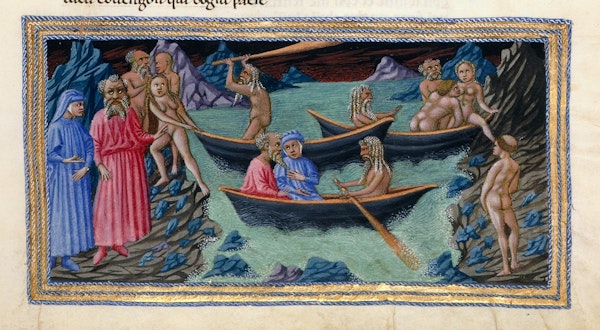 Dante being rowed by Charon across the River Acheron, from the closing lines of Canto III in the Inferno - Source. 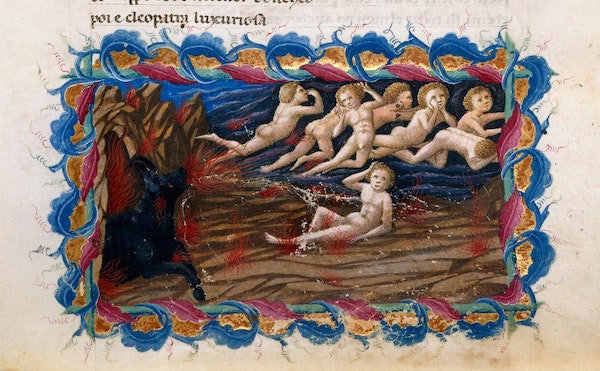 The cardinal sinners being punished in Hell - Source 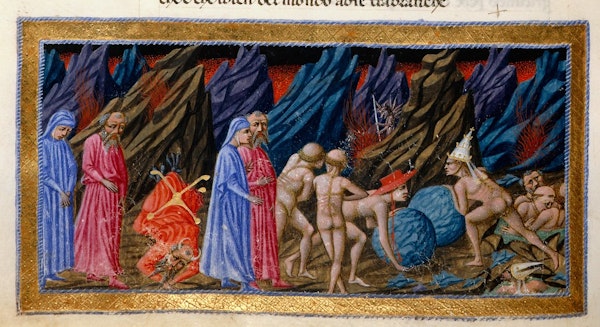 Dante and Virgil entering the fourth circle, with Plutus Avaricius, the Prodigals and the Wrathful - Source 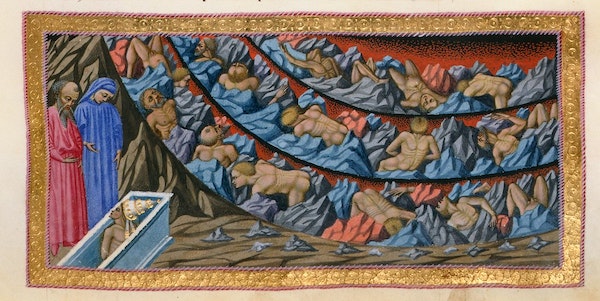 Dante and Virgil looking into the tomb of Pope Anastasius, and the three tiers of the violent, suicides, and other malefactors - Source 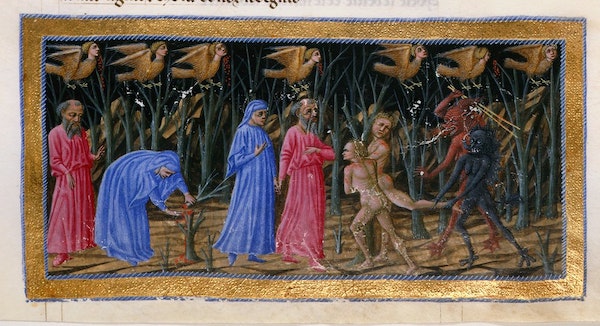 Dante breaking a branch from one of the trees in the wood of the suicide, which shouts in pain and bleeds, Dante and Virgil conversing with the wounded tree, Piero delle Vigne, and watching the souls of two suicides being chased by demons, while harpies perch in the trees - Source 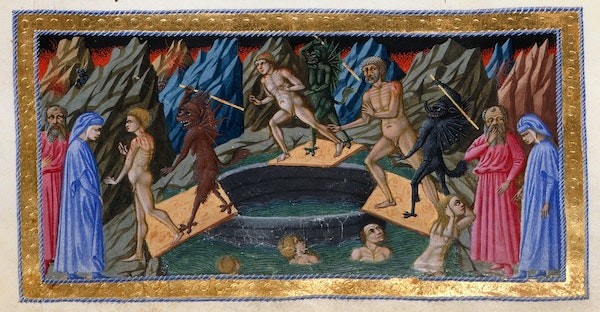 Virgil and Dante entering the eighth circle, that of adulterers, seducers, and flatterers - Source 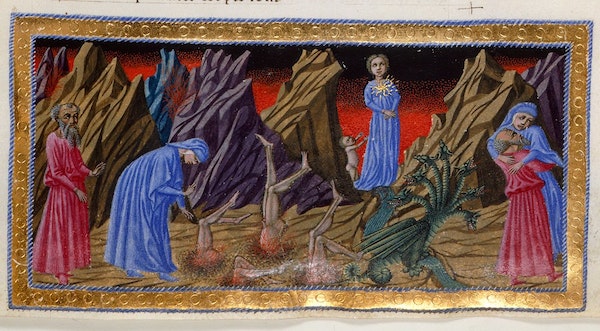 Dante and Virgil entering the area devoted to simoniacs and magicians, while Dante speaks to the upside-down figure of Pope Nicholas III, with a figure of the True Church in the centre, as a lady dressed in blue with a gold star on her breast, and a seven-headed monster before her (presumably the false church) - Source 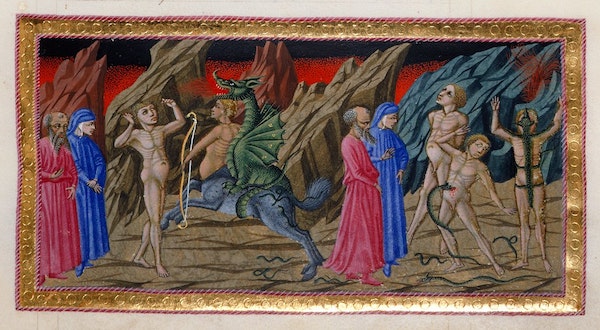 Dante and Virgil witnessing Vanno Fucci, the pillager of a church in Pistoia, being attacked by the monster Cacus, who is half-centaur and half-dragon, and Dante and Virgil speaking to three other souls, tormented by snakes and lizards - Source 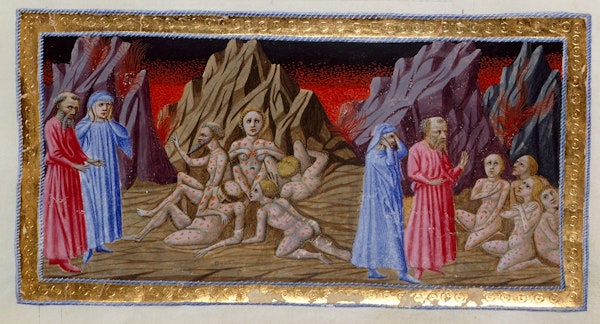 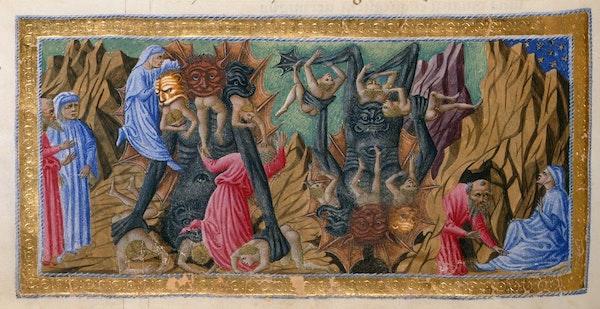 Dante and Virgil witnessing the gigantic figure of Dis, with his three mouths biting on the sinners Cassius, Judas, and Brutus, and Dante and Virgil emerging from the Inferno - Source

Dante and Virgil at the gates of Purgatory, and the Proud carrying heavy stones - Source 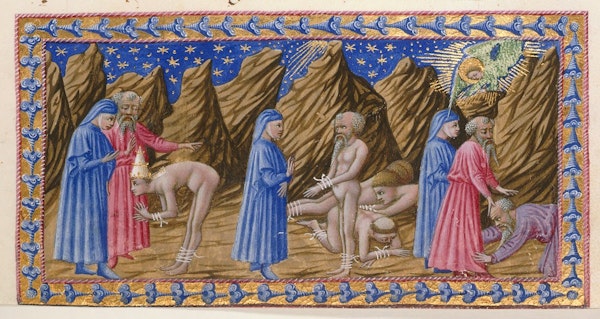 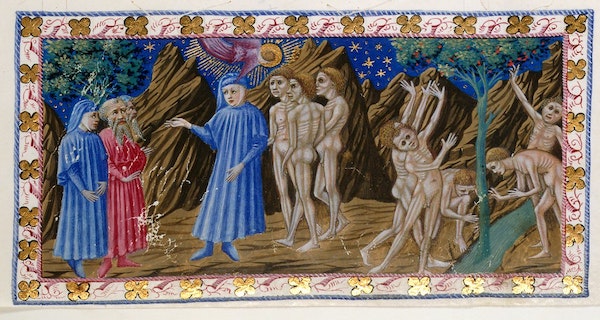 Dante and Virgil before Forise Donati, who explains the punishment due to the Gluttons, who see food they cannot reach - Source 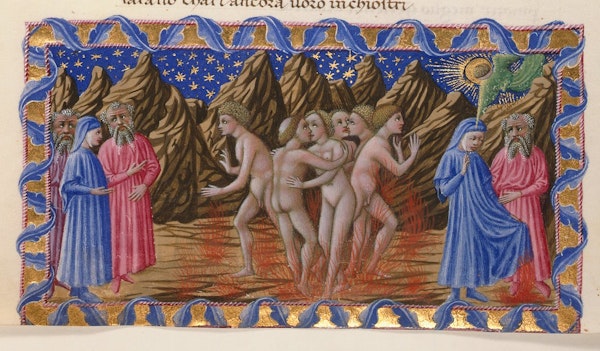 Dante and Virgil observing the fate of the Lustful - Source 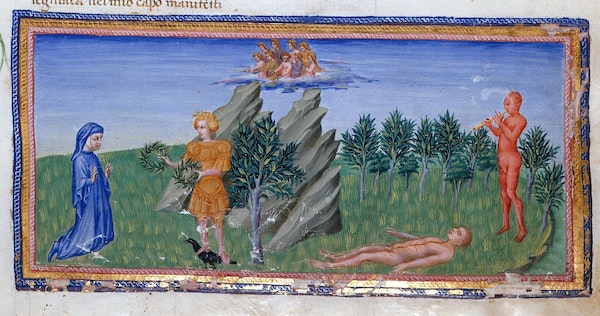 Dante and Apollo before Parnassus - Source 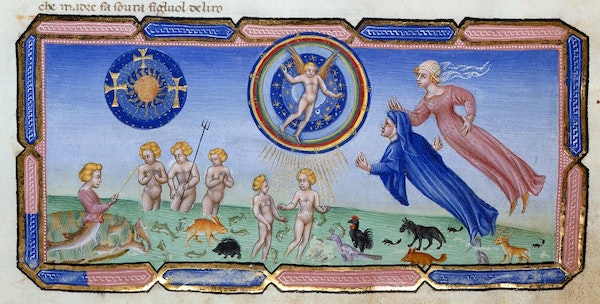 Beatrice explaining to Dante that the universe is a hierarchy of being, with creatures devoid of reason in the early 'sea of being', and heaven as nine spheres rules by the figure of love - Source

Beatrice explaining some scientific theories to Dante, including the appearance of the moon - Source

The legends of Theseus and Ariadne - Source

Resurrection of the dead - Source

Dante and Beatrice ascending to the Heaven of Mars - Source

Dante and Beatrice ascending to the Heaven of Jupiter - Source 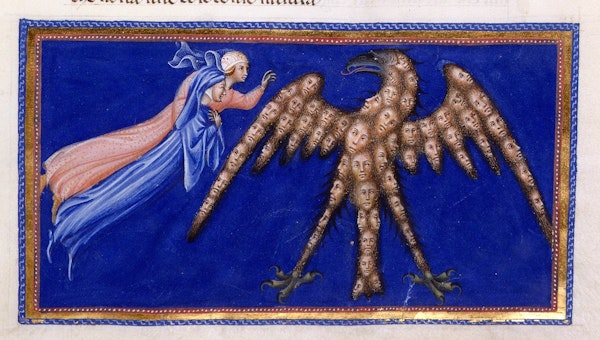 Dante and Beatrice before the eagle of Justice - Source 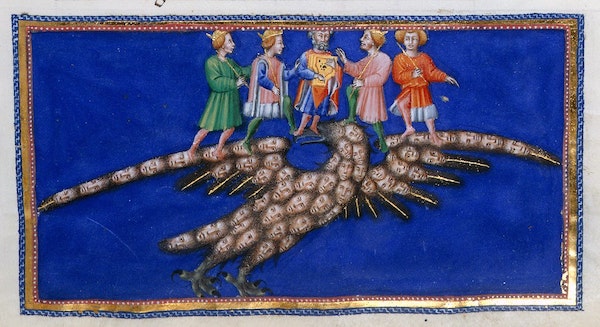 Five Just Princes, atop the eagle of Justice - Source

Dante and Beatrice before the Seven Spheres of Man - Source

Beatrice watching as Dante kneels before Adam, who stands within a circle of golden stars with five naked souls - Source 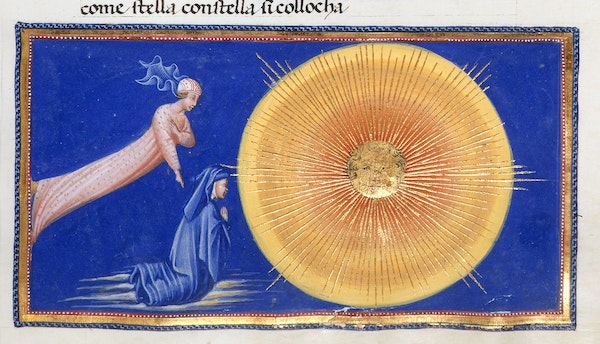 Dante and Beatrice before the Light - Source