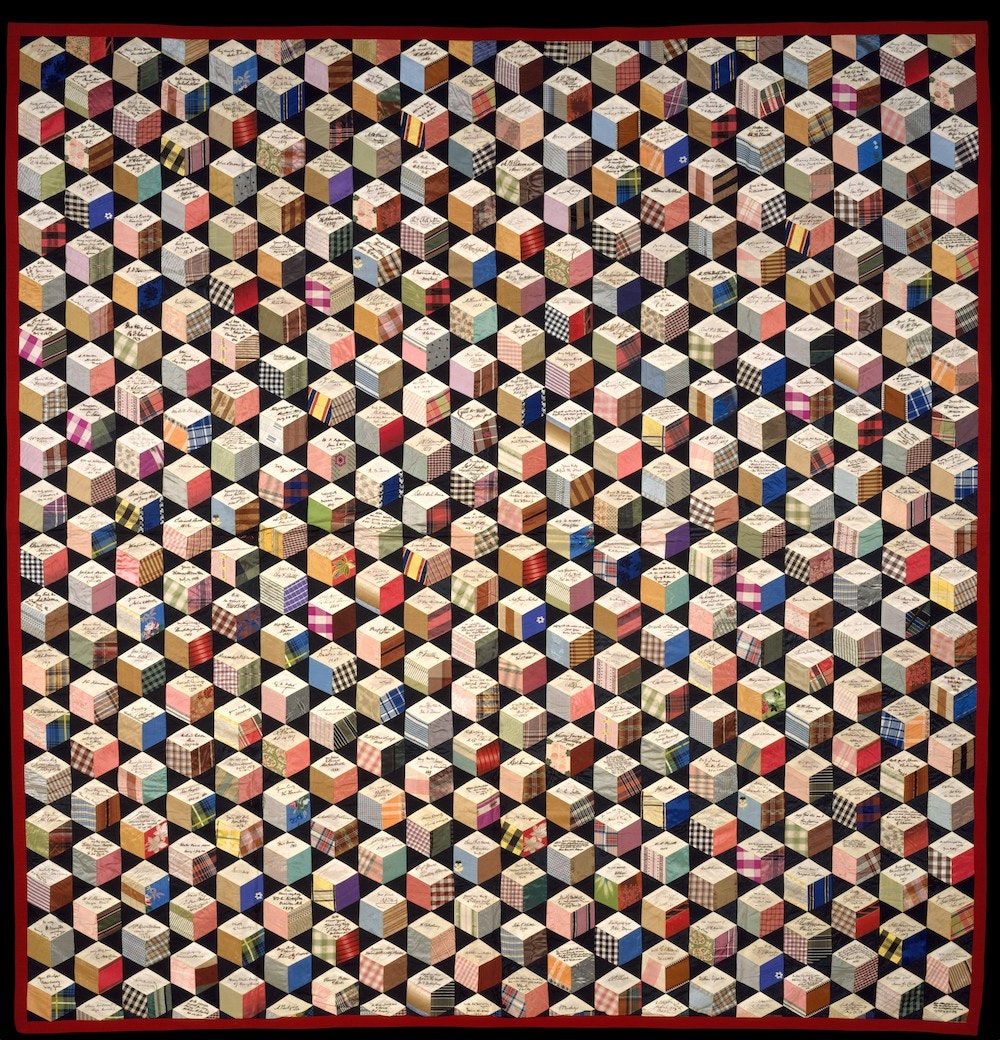 In 1856, a seventeen-year-old girl from Rhode Island embarked on a unique and brilliant quiltmaking project. The girl's name was Adeline Harris and her project was to make a quilt incorporating hundreds of celebrity autographs. While signature quilts were nothing new, the contributions were typically sourced from within a small community, such as a church, and functioned to commemorate a single event, such as a birth or marriage — Adeline, however, had bigger ideas, her community as the notable figures of her day, her event the phenomenon of nineteenth-century celebrity. Although one might imagine Adeline dutifully lugging a quilt to all corners of the globe for the famous to adorn with their scrawl, her process was much more ingenious (and practical). She sent a small diamond of white silk in the post with an explanation of her project and a request that they send it back to her signed. The returned and now autographed fragments were then worked into the quilt as the "top" planes in a wonderful trompe l'oeil tumbling block design. The response she got to her unusual request was nothing short of phenomenal — she ended up incorporating 360 signed pieces in total, including those from such luminaries as Jacob Grimm, Alexander von Humboldt, Charles Dickens, Ralph Waldo Emerson, and Abraham Lincoln (one of eight American presidents represented). According to her grand-daughter the Lincoln signature was, due to a family connection, actually acquired in person, and Adeline was meant to have even danced with Lincoln at his inauguration ball. Many of the pieces included a short message in addition to the signature. The diamond from the poet and editor N. P. Willis includes the following (suggestive?) rhyme: "Dream what thou willst / beneath this quilt, / My blessing still is — Yours." 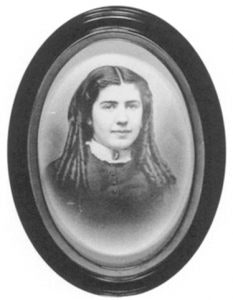 Adeline Harris, around the time she began the quilt. Met Museum curator Amelia Peck tells us that Adeline was the daughter of a prosperous mill owner, and in 1866, shortly after completing the quilt, married Yale graduate Lorenzo Sears (1838-1916) who taught at the University of Vermont in the 1880s before becoming a Professor at Brown University.

One of the people Adeline contacted in 1864 was Sarah Hale, editor of Godey's Lady's Book, who, as well as providing her signature, also promptly wrote up "the very beautiful idea" in her magazine. Hale explains how it is not only the signed pieces which tell a story:

Each autograph is written, with common black ink, on a diamond shaped piece of white silk (placed over a diagram of white paper and basted at the edges), each piece the centre of a group of colored diamonds, formed in many instances, from "storied" fragments of dresses which were worn in the olden days of our country. For instance, there are pieces of a pink satin dress which flaunted at one of President Washington's dinner parties; with other relics of those rich silks and stiff brocades so fashionable in the last century.

And, as Hale explains in her later Manners, Happy Homes and Good Society All the Year Round (1868), there was meaning in their arrangement too:

Then comes the intellectual part, the taste to assort colors and to make the appearance what it ought to be, where so many hundreds of shades are to be matched and suited to each other. After that we rise to the moral, when human deeds are to live in names, the consideration of the celebrities, who are to be placed each, the centre of his or her own circle! To do this well requires a knowledge of books and life, and an instinctive sense of the fitness of things, so as to assign each name its suitable place in this galaxy of stars or diamonds.

As for the process, conservator Elena Philips explains that, after examining the seams along the quilt top, it can be seen that "first she stitched the individual diamonds into blocks, then connected the blocks into columns, and finally seamed the columns together across the entire width. In total, she cut and stitched 1,840 individual silk pieces to create the quilt... [and used] more than one hundred and fifty different silk fabrics."

This is just one example from the Metropolitan Museum's superb collection of 151 American quilts and coverlets, more about which you can read in curator Amelia Peck's American Quilts and Coverlets in The Metropolitan Museum of Art (2009). We are also selling a print of the "autograph quilt" in our online shop (though be aware that the signatures will likely be too small to be legible!).

Detail showing the Abraham Lincoln contribution in the centre.

Detail showing the Ralph Waldo Emerson contribution in the centre.