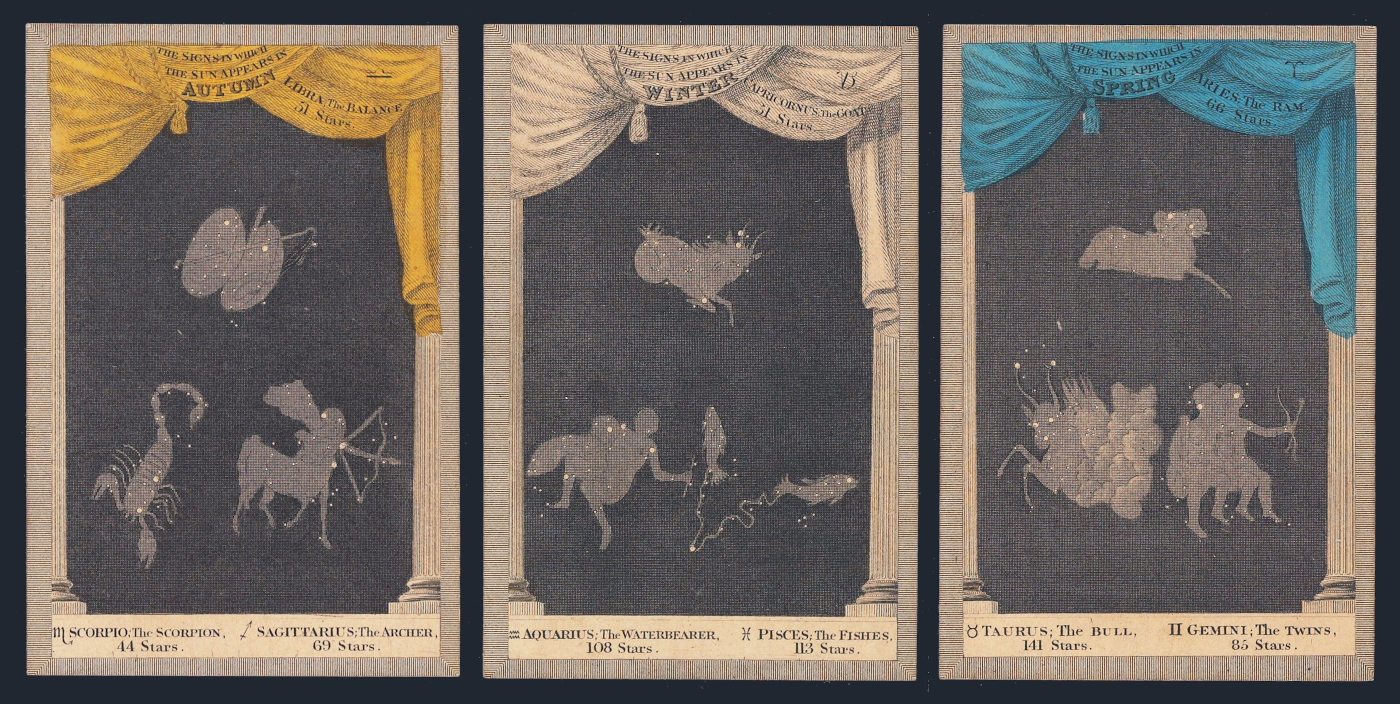 Hearts, diamonds, clubs, spades — every player (shark or not) is familiar with the four suits in a standard deck. But dig a little deeper into the discard pile of history and you will soon draw up cards adorned with cups, coins, clovers, acorns, and more. For shuffling enthusiasts, there is a distinction to be made between standard and nonstandard packs. The Cary Collection at Yale University holds hundreds of each variety, but it is the latter kind that catches the non-specialist eye, representing the effort to craft “an original pictorial conception”, according to William B. Keller. Forget queens and kings and instead imagine cards painted onto tan hides by Apache tribes and aces inscribed with moralizing mottos such as “use but don’t abuse me”.

One particularly fine example is the Astronomia deck. Transcending the earthly concerns of betting and regal motifs, this pack focuses exclusively on the heavens. From the collection of card aficionado Melbert Cary, which contains another lovely celestial spread from c. 1717, the Astronomia pack — printed in London in 1829 and reissued in 1831 — recalls the mystical origins of playing cards. Whereas the Tarot tradition followed astrology into occult realms, this deck remains soberly astronomical. Above the skyscape on each card is a table of cosmological data for particular extra-terrestrial objects: its distance from the sun, orbital eccentricity, and progression-per-hour are displayed on decorative curtain swags. Were you to fan them across a table, it would be like gazing through fifty-two windows onto outer space, framed by classical stone columns.

The deck’s otherworldly beauty makes it difficult to envision dealing out a hand (though there is a certain appeal to the idea of Saturnine bridge, lunar hold’em, or Martian cribbage). Instead, the anonymous inventor had other ideas up his sleeve: the Astronomia pack was released with an accompanying text, Explanation of the Celestial Cards, that details two games — Conjunction and Combination — with a primer on “the sublime Science of Astronomy”. As far as we can tell, they play similar to whist, requiring four players working in pairs to follow suit (that is, color-coded season) if possible, or to trump the leading card. For suits, however, Astronomia uses color-coded seasons, with Zodiac constellations and other galactic bodies, like the Great Comet of 1680, forming an ersatz royal flush. (Moons earn extra points.)

The night sky has long humbled humans, inspiring us to probe deeper into the internal and external worlds. Astronomia had similar ambitions. Its prefatory manual hopes to “excite the youthful reader to seek a more extensive knowledge of this noble science, or lead him to contemplate, with reverent admiration, the power and wisdom, — the harmony and magnificence, — displayed in the construction of the Universe”.

Below you will find the thirteen cards which make up the summer "suit" and you can riffle through the full Astronomia pack via the Beinecke Library at Yale.