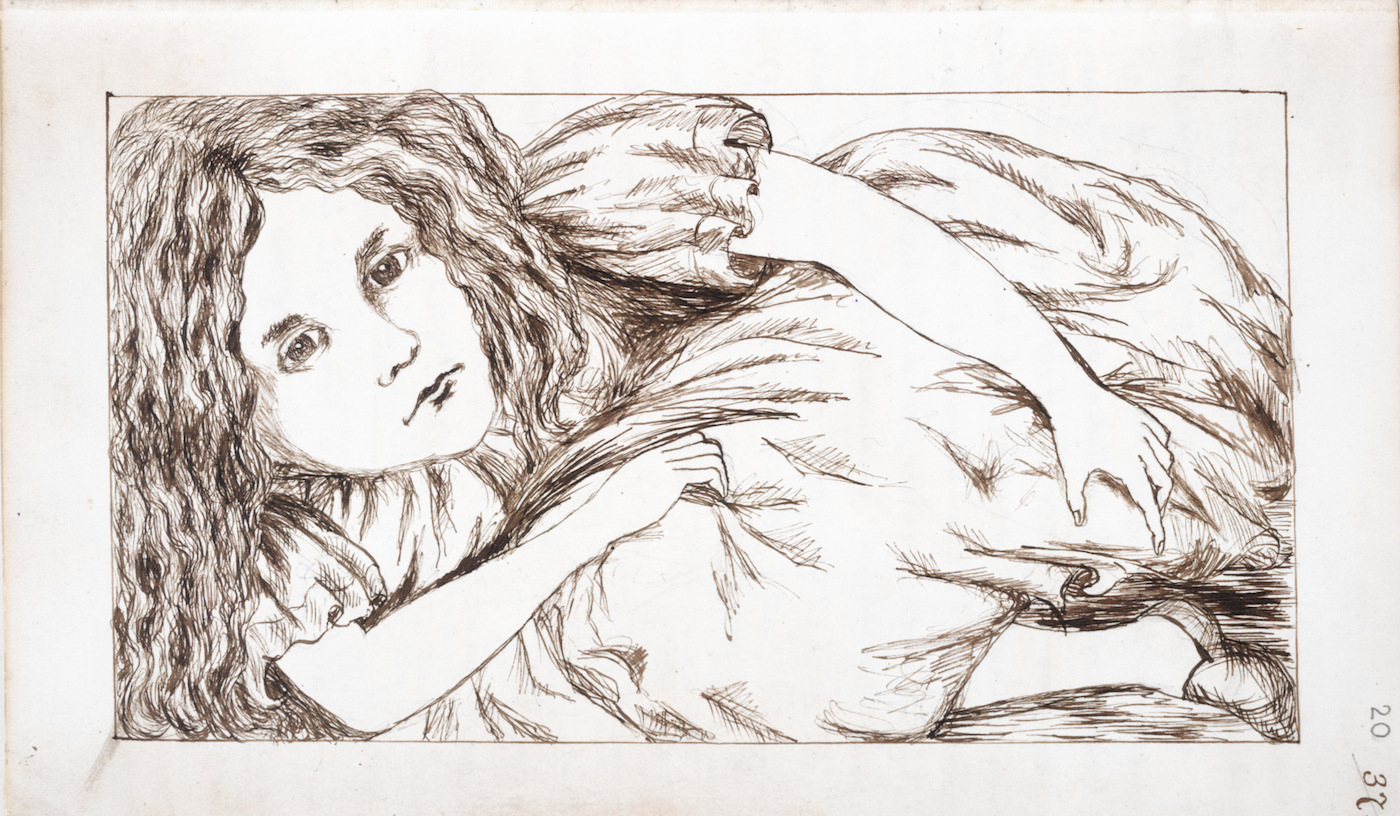 “[W]hat is the use of a book”, asks Alice in the opening scene to Lewis Carroll’s Alice's Adventures in Wonderland, “without pictures or conversations?” This question from Alice is at once a critique of her sister’s pictureless tome, and a paving the way for the delight of words and images to follow. Indeed, John Tenniel’s famous illustrations — for both the first edition of Wonderland and its sequel Through the Looking-Glass — have become integral to how we experience the story, in both books and film. Tenniel, however, was not the first to illustrate the tale. That honor belongs to Carroll himself, whose original manuscript of the story (then titled “Alice’s Adventures Under Ground”) is littered with thirty-seven of his own sepia-ink drawings. It seems this entwining of word and image — so important to the published version — was there from the beginning.

Carroll's illustrations are slightly more reserved and less caricatured than John Tenniel’s efforts so familiar to us today. In a vertical sketch that stretches out across the manuscript’s right margin, spanning part of the indelible mushroom scene, Alice’s “immense length of neck” assumes the form of a fuzzy tree trunk, capped with an almost Pre-Raphaelite face, which gazes solemnly across the distant forest below. It's an oddly mournful countenance that recurs throughout. On the final page Carroll stuck a small photographic portrait of Alice Liddell (1852–1934) the family friend for whom he wrote (and drew) the story. Underneath the photograph is his attempt at a drawn portrait, with which he seems to have been displeased enough to cover with the photograph. Did he intend his heroine to look like Alice herself? It's not so easy to tell, though there is something of her look in his drawings.

On the left, Alice as Carroll draws her in the mushroom scene, and on the right, Carroll's portrait of Alice Lidell on the final page.

The manuscript was presented to Alice so that she could revisit a story that he had improvised while rowing her and her sisters down one of Oxford’s rivers. As Carroll put it:

Many a day had we rowed together on that quiet stream. . .and many a fairy tale had been extemporized for their benefit. . .yet none of these many tales got written down: they lived and died, like summer midges, each in its golden afternoon. . .

While unsubstantiated theories about the author’s consumption of hallucinogenic compounds or undiagnosed temporal lobe epilepsy are often trotted out as an explanation for the fictional Alice’s phantasmagoric adventure, the other-worldly pleasures of these idle river trips seem to be a more likely source for the unparalleled visions of Wonderland. As Walter de la Mare observed, when writing about Carroll, “afternoons in July, if fair and cloudless, are apt to be narcotics. The rhythm of sculling quiets the mind and sets the workaday wits drowsing”.

In addition to his clerical and mathematical pursuits, Carroll was as much a visual artist as a storywriter. In 1899, there was enough unpublished material for his nephew, Stuart Carroll Collingwood, to publish The Lewis Carroll Picture Book, a collection of lesser-known texts, many complete with illustrated margins, alike in kind to “Alice’s Adventures Under Ground”. Carroll was also a talented photographer, keeping a darkroom in his College rooms. As Diane Waggoner has argued, “Carroll’s photographs of children equaled the status of his children’s books. His pictures served as a vehicle for the emotional and imaginative appeal of. . . childhood”. A similar set of concerns and proclivities can be glimpsed in his original Alice illustrations, which capture both the playful innocence and unselfconscious sincerity of childhood adventure.

When Carroll decided to publish his story, excising certain family-specific details from “Alice’s Adventures Under Ground”, he chose John Tenniel (1820–1914) as illustrator, well-known for his cartoons in the magazine Punch. Tenniel based several of his drawings, engraved onto woodblock electrotypes by the Dalziel brothers, off of Carroll’s own illustrations, but found the Oxford Don to be rather exacting with his interventions. Some of this scrupulousness was warranted: Tenniel introduced several interpretive ambiguities into his illustrations, few of which escaped Carroll’s notice, or his time-consuming calls for correction. And, after working on Alice’s Adventures in Wonderland, Tenniel initially declined to illustrate Through the Looking-Glass (1871), which scholars have read as a sign that the collaboration between author and illustrator had temporarily soured.

Below you can browse all thirty-seven of Carroll’s manuscript illustrations, which carry bittersweet associations. On one hand, it is a joy that they have survived. It was treasured by Alice Liddell until she was forced to auction the text in 1928 to pay for her husband’s death duties. Thankfully, it was eventually purchased, after passing through the possession of several intermediary owners, by American benefactors, who donated the manuscript to the British Library as a symbol of a special, postwar relationship between the nations in 1948. On the other hand, these illustrations conjure an unfathomable depth of creative loss when we remember that the Alice stories were just a few of the many “original, funny, starling, and brilliant” tales that Carroll extemporized for children, most of which were never transcribed or drawn at all, only given over to the wind and river on idle summer afternoons.