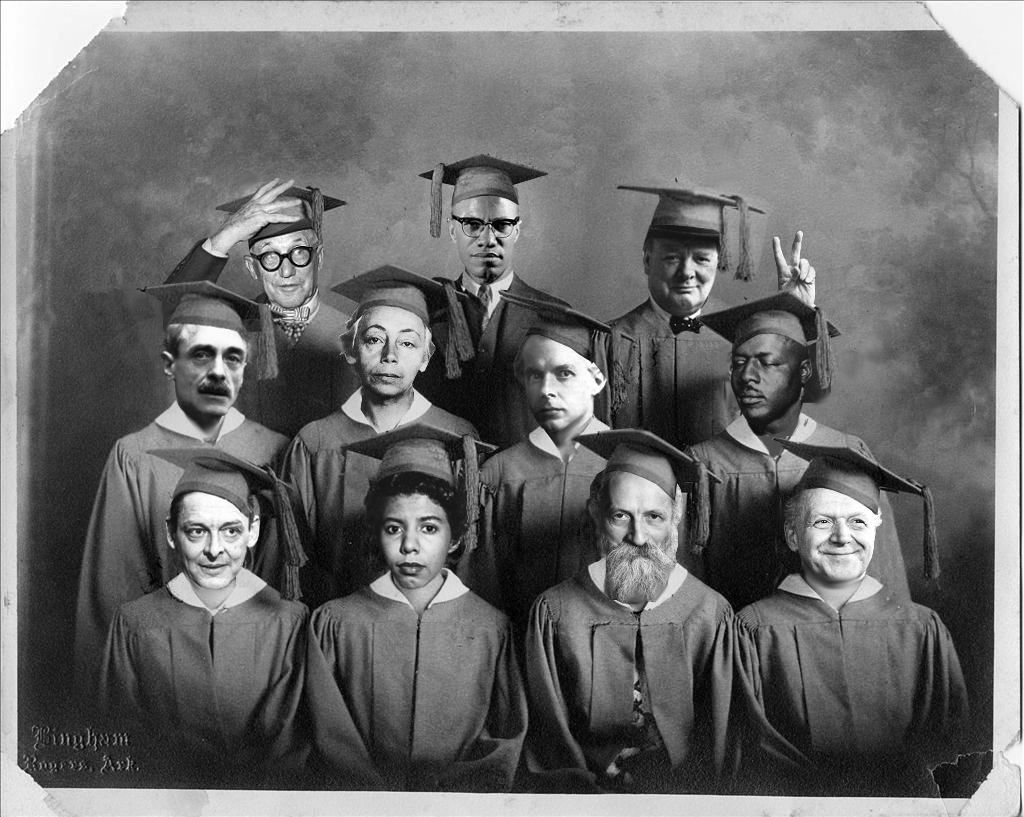 Born in America, at the age of 25 Eliot emigrated to England where he made his name as one of the most important literary figures of the 20th century. Although also an essayist, publisher, playwright, literary and social critic, it is perhaps as a poet that he is best known, particular as the author of the groundbreaking poem The Waste Land, published in 1922. Other widely acclaimed poems include The Love Song of J. Alfred Prufrock (1915), The Hollow Men (1925), Ash Wednesday (1930), and Four Quartets (1945). He is also known for his seven plays, particularly Murder in the Cathedral (1935). He was awarded the Nobel Prize in Literature in 1948, "for his outstanding, pioneer contribution to present-day poetry."

Charles-Édouard Jeanneret-Gris, better known as Le Corbusier, was a Swiss-French architect, designer, painter, urban planner, writer, and one of the pioneers of what is now called modern architecture. His career spanned five decades, with his buildings constructed throughout Europe, India, and the Americas. Dedicated to providing better living conditions for the residents of crowded cities, Le Corbusier was influential in urban planning, and was a founding member of the Congrès international d'architecture moderne (CIAM). As well as designing many buildings and urban spaces, Le Corbusier also wrote extensively on architecture and its future.

Valéry is best known as a poet, and he is sometimes considered to be the last of the French symbolists. On the night of 4 October 1892, during a heavy storm, he underwent an existential crisis, an event that made a huge impact on his writing career. Eventually, around 1898, he quit writing altogether, publishing not a word for nearly twenty years. In 1917, at the age of 46, he finally broke his 'great silence' with the publication of his obscure, but sublimely musical, masterpiece La Jeune Parque, a poem of 512 alexandrine lines in rhyming couplets. In addition to his poetry and fiction (drama and dialogues), his interests included aphorisms on art, history, letters, music, and current events. Valéry was nominated for the Nobel Prize in Literature in twelve different years.

Martin Buber was an Austrian-born Israeli Jewish philosopher best known for his philosophy of dialogue, a form of existentialism centred on the distinction between the I–Thou relationship and the I–It relationship. Born in Vienna, Buber came from a family of observant Jews, but broke with Jewish custom to pursue secular studies in philosophy. In 1902, he became the editor of the weekly Die Welt, the central organ of the Zionist movement, although he later withdrew from organizational work in Zionism. In 1923, Buber wrote his famous essay on existence, Ich und Du (later translated into English as I and Thou), and in 1925, he began translating the Hebrew Bible into the German language.

Malcolm X (born Malcolm Little), and also known as el-Hajj Malik el-Shabazz, was an American Muslim minister and a human rights activist. To his admirers he was a courageous advocate for the rights of blacks, a man who indicted white America in the harshest terms for its crimes against black Americans; detractors accused him of preaching racism and violence. He has been called one of the greatest and most influential African Americans in history. His Autobiography of Malcolm X was, in 1998, named by Time as one of ten "required reading" nonfiction books.

The Hungarian composer and pianist Béla Viktor János Bartók is considered one of the most important composers of the 20th century. As well as the creation of his own music, he was also an avid collector. Through his collection and analytical study of folk music, he was one of the founders of comparative musicology, which later became ethnomusicology.

Kollwitz was a German painter, printmaker, and sculptor whose work offered an eloquent and often searing account of the human condition, and the tragedy of war, in the first half of the 20th century. Her empathy for the less fortunate, expressed most famously through the graphic means of drawing, etching, lithography, and woodcut, embraced the victims of poverty, hunger, and conflict. Initially her work was grounded in Naturalism, and later took on Expressionistic qualities.

Otto Neurath was an Austrian philosopher of science, sociologist, and political economist. As founding director of the Gesellschafts- und Wirtschaftsmuseum in Vienna, Neurath created the Vienna Method, which later became known as Isotype (International System of Typographic Picture Education), a method of showing social, technological, biological and historical connections in pictorial form. The term Isotype was applied to the method around 1935, after its key practitioners, including Neurath, were forced to leave Vienna by the rise of Austrian fascism.

"Blind" Willie Johnsonwas a gospel blues singer and guitarist. While the lyrics of his songs were usually religious, his music drew from both sacred and blues traditions. His unique sound is characterized by his slide guitar accompaniment and tenor voice, and his frequent use of a lower-register 'growl' or false bass voice. Johnson was not born blind. Although it is not certain how he lost his sight, his alleged widow Angeline Johnson told Samuel Charters that when Willie was seven his father beat his stepmother after catching her going out with another man, and that she, out of spite, blinded young Willie by throwing lye in his face. Johnson made 30 commercial recording studio record sides (29 songs) in five separate sessions for Columbia Records from 1927–1930. Fans of the West Wing may recognise his "Dark Was the Night, Cold Was the Ground" from episode 13 of season 5, The Warfare of Genghis Khan.

Making his name as the United Kingdom's war-time leader from 1940 to 1945, Churchill is one of the 20th century's most famous political figures. As well as being a two-time prime minister of the UK (a second term was served 1951-1955), Churchill was also an officer in the British Army, a historian, a writer, and an artist (chiefly in watercolours). Under the pen name "Winston S. Churchill" he published widely including a novel, two biographies, three volumes of memoirs, and several histories, and in 1953 won the Nobel Prize in Literature. He was the first person to be made an honorary citizen of the United States.

The American playwright and writer Lorraine Vivian Hansberry — inspiration for Nina Simone's song "To Be Young, Gifted and Black" — was the first black woman to write a play performed on Broadway. Her best known work, the play A Raisin in the Sun, highlights the lives of Black Americans living under racial segregation in Chicago. Hansberry's family had struggled against segregation, challenging a restrictive covenant and eventually provoking the Supreme Court case Hansberry v. Lee. The title of the play was taken from the poem "Harlem" by Langston Hughes: "What happens to a dream deferred? Does it dry up like a raisin in the sun?" After she moved to New York City, Hansberry worked at the Pan-Africanist newspaper Freedom, where she dealt with intellectuals such as Paul Robeson and W. E. B. Du Bois. Much of her work during this time concerned the African struggle for liberation and their impact on the world. Hansberry has been identified as a lesbian, and sexual freedom is an important topic in several of her works. She died of cancer at the age of 34.

To learn more about Public Domain Day visit publicdomainday.org. For more names whose works will be going into the public domain in 2015 see the Wikipedia pages on 1945 and 1965 deaths (which you can fine-tune down to writers and artists), and also this dedicated page.

Wondering what will enter the public domain through copyright expiration in the U.S.? Like last year, and the year before...Nothing.