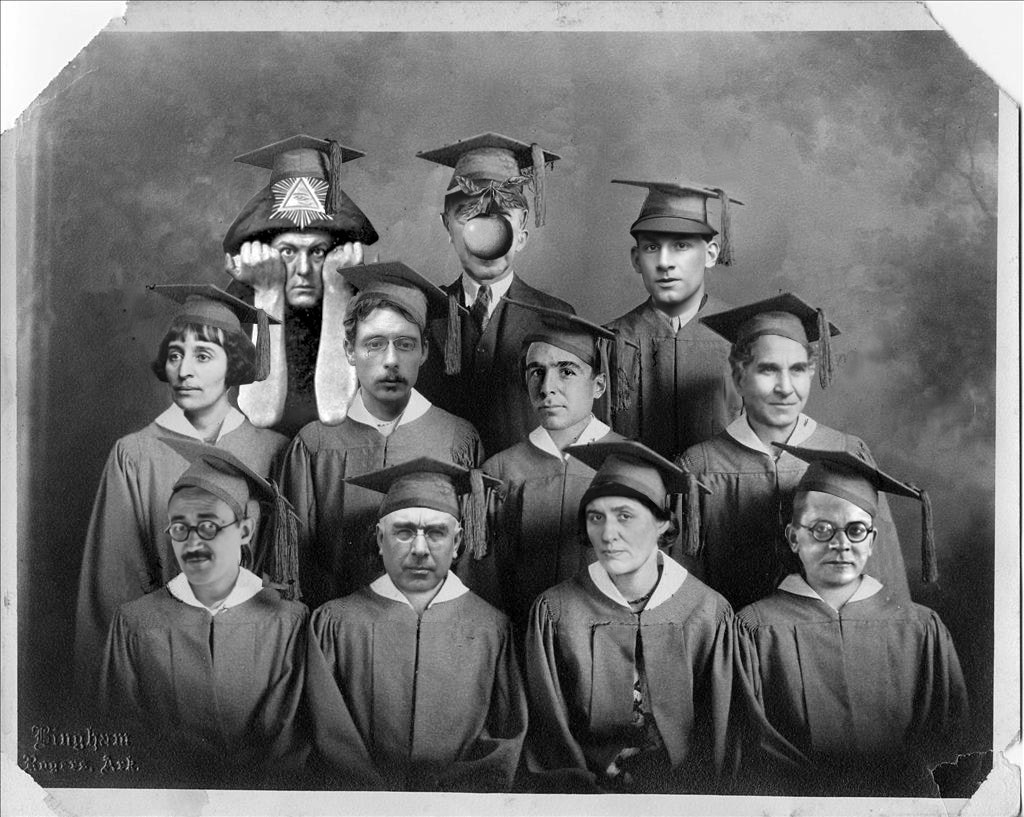 Pictured above is our top pick of artists and writers whose works will, on 1st January 2018, enter the public domain in many countries around the world. Of the eleven featured, seven will be entering the public domain in countries with a "life plus 70 years" copyright term (e.g. most European Union members, Brazil, Israel, Nigeria, Russia, Turkey, etc.) and four in countries with a "life plus 50 years" copyright term (e.g. Canada, New Zealand, and many countries in Asia and Africa) — those that died in the year 1947 and 1967 respectively. As always it's a miscellaneous medley assembled for our graduation photo, including one of the chief figures of the Surrealist movement, Gertrude Stein's lover, the other Winston Churchill, a war poet, and a mystic, magician, and mountaineer once denounced as the “the wickedest man in the world”.

Aleister Crowley was an English occultist, ceremonial magician, poet, painter, novelist, and mountaineer. He founded the religion of Thelema, identifying himself as the prophet entrusted with guiding humanity into the Æon of Horus in the early 20th century. After attending the University of Cambridge (where some biographers allege he was recruited as a British spy), in 1898 he joined the esoteric Hermetic Order of the Golden Dawn, where he was trained in ceremonial magic by Samuel Liddell MacGregor Mathers and Allan Bennett. Moving to Boleskine House by Loch Ness in Scotland, he went mountaineering in Mexico with Oscar Eckenstein, before studying Hindu and Buddhist practices in India. In 1904, while on his honeymoon in Cairo, Crowley claimed to have been contacted by a supernatural entity named Aiwass, who provided him with The Book of the Law, a sacred text that served as the basis for Thelema. Crowley gained widespread notoriety during his lifetime, being a recreational drug experimenter, bisexual and an individualist social critic. He was denounced in the popular press as "the wickedest man in the world" and a Satanist. Crowley has remained a highly influential figure over Western esotericism and the counter-culture, and continues to be considered a prophet in Thelema.

René François Ghislain Magritte was a Belgian surrealist artist. He became well known for creating a number of witty and thought-provoking images which often depicted ordinary objects in an unusual context, and so challenging the observers' preconditioned perceptions of reality. His work was hugely influential, especially in pop, minimalist and conceptual art. Magritte described his paintings as "visible images which conceal nothing; they evoke mystery and, indeed, when one sees one of my pictures, one asks oneself this simple question, 'What does that mean?'. It does not mean anything, because mystery means nothing either, it is unknowable."

Siegfried Loraine Sassoon was an English poet, writer, and soldier. Decorated for bravery on the Western Front, he became one of the leading poets of the First World War. His poetry both described the horrors of the trenches, and satirised the patriotic pretensions of those who, in Sassoon's view, were responsible for a jingoism-fuelled war. Sassoon became a focal point for dissent within the armed forces when he made a lone protest against the continuation of the war in his "Soldier's Declaration" of 1917, culminating in his admission to a military psychiatric hospital; this resulted in his forming a friendship with Wilfred Owen, who was greatly influenced by him. Sassoon later won acclaim for his prose work, notably his three-volume fictionalised autobiography, collectively known as the "Sherston trilogy".

Alice Babette Toklas was an American-born member of the Parisian avant-garde of the early 20th century, and the life partner of American writer Gertrude Stein. Toklas met Stein in Paris on September 8, 1907, the day she arrived there from San Francisco after the devastating 1906 San Francisco earthquake. Together they hosted a salon in the home they shared that attracted expatriate American writers, such as Ernest Hemingway, Paul Bowles, Thornton Wilder, and Sherwood Anderson; and avant-garde painters, including Picasso, Matisse, and Braque. Acting as Stein's confidante, lover, cook, secretary, muse, editor, critic, and general organizer, Toklas remained a background figure, chiefly living in the shadow of Stein, until the publication by Stein of Toklas' "memoirs" in 1933 under the teasing title The Autobiography of Alice B. Toklas, which went on to become Stein's best-selling book. In 1954 Toklas published a book of her own, The Alice B. Toklas Cookbook, which mixed reminiscences and recipes. The most famous recipe, contributed by her friend Brion Gysin, is for "Haschich Fudge", a mixture of fruit, nuts, spices, and "canibus sativa" [sic] or marijuana. Her name was later lent to the range of cannabis concoctions called "Alice B. Toklas brownies" (despite the fact that the "Haschich Fudge" recipe did not originate with Toklas, nor is there any record that she ever made it herself). In 1963 Toklas published her autobiography What Is Remembered, which ends abruptly with the death of Stein.

Pierre Bonnard was a French painter and printmaker, as well as a founding member of the Post-Impressionist group of avant-garde painters Les Nabis. Bonnard preferred to work from memory, using drawings as a reference, and his paintings are often characterized by a dreamlike quality. The intimate domestic scenes, for which he is perhaps best known, often include his wife Marthe de Meligny. Bonnard has been described as "the most thoroughly idiosyncratic of all the great twentieth-century painters", and the unusual vantage points of his compositions rely less on traditional modes of pictorial structure than voluptuous color, poetic allusions and visual wit. Identified as a late practitioner of Impressionism in the early 20th century, Bonnard has since been recognized for his unique use of color and his complex imagery. "It's not just the colors that radiate in a Bonnard", writes Roberta Smith, "there’s also the heat of mixed emotions, rubbed into smoothness, shrouded in chromatic veils and intensified by unexpected spatial conundrums and by elusive, uneasy figures."

Winston Churchill was an American best-selling novelist of the early 20th century. He is nowadays overshadowed, even as a writer, by a certain cigar-toting British statesman of the same name, with whom he was acquainted, but not related. Their lives had some interesting parallels. They both gained their tertiary education at service colleges and briefly served (during the same period) as officers in their respective countries' armed forces (one was a naval, the other an army officer). Both Churchills were keen amateur painters, as well as writers. Both were also politicians; although here the comparison is far more tenuous: the British Churchill's political career being far more illustrious.

Matthew Phipps Shiell – known as M. P. Shiel – was a prolific British writer of West Indian descent. His legal surname remained "Shiell" though he adopted the shorter version as a de facto pen name. He is remembered mostly for supernatural horror and scientific romances, and his work was published as serials, novels, and as short stories. The Purple Cloud (1901) remains his most famous and often reprinted novel. H. G. Wells lauded the novel as "brilliant" and H. P. Lovecraft later praised it as exemplary weird fiction, "delivered with a skill and artistry falling little short of actual majesty."

Jean Toomer was an African American poet and novelist commonly associated with the Harlem Renaissance (though he actively resisted the association) and modernism. His first book Cane, published in 1923, is considered by many to be his most significant. He continued to write poetry, short stories and essays. After his second marriage in 1934, he moved from New York to Doylestown, Pennsylvania, where he became a member of the Religious Society of Friends (also known as Quakers) and retired from public life. His papers are held by the Beinecke Rare Book Library at Yale University.

Pyotr Demianovich Ouspenskii (known in English as Peter D. Ouspensky), was a Russian mathematician and esotericist known for his expositions of the early work of the Greek-Armenian teacher of esoteric doctrine George Gurdjieff, whom he met in Moscow in 1915. He shared the (Gurdjieff) "system" for 25 years in England and the United States, having separated from Gurdjieff in 1924 personally, for reasons he explains in the last chapter of his book In Search of the Miraculous, which recounts what he learned from Gurdjieff during those years. Some, including his close pupil Rodney Collin, say that he finally gave up the system in 1947, just before his death, but his own recorded words on the subject ("A Record of Meetings", published posthumously) do not clearly endorse this judgement, nor does Ouspensky's emphasis on "you must make a new beginning" after confessing "I've left the system".

Anna Wickham was the pseudonym of Edith Alice Mary Harper, a British poet with strong Australian connections. She is remembered as a modernist figure and feminist writer, though one who did not command sustained critical attention in her lifetime. Her reputation has improved since her death and she is now regarded as an important early 20th-century writer. During the 1930s she was well known in literary London, and wrote a great deal of poetry (much of which was later lost in war damage); but found it harder to get published. She did have support from the somewhat louche quarter of John Gawsworth, who put out a Richards Press collection of her work in 1936. An extended autobiographical essay Prelude to a Spring Clean dates from 1935, the year in which she supported the just-married Dylan Thomas and Caitlin, and then quarrelled with them. She committed suicide during the winter of 1947.

Hans Fallada (born Rudolf Wilhelm Friedrich Ditzen) was a German writer whose better known novels include Little Man, What Now? (1932) and Every Man Dies Alone (1947). The latter — based on the true story of a German couple, Otto and Elise Hampel, who were executed for producing and distributing anti-Nazi material in Berlin during the war — was completed just before his death from a weakened heart after years of addiction to morphine, alcohol and other drugs. It was published by Penguin in 2010 under the title Alone in Berlin.

To learn more about Public Domain Day visit publicdomainday.org. For more names whose works will be going into the public domain in 2018 see the Wikipedia pages on 1947 and 1967 deaths (which you can fine-tune down to writers and artists), and also this dedicated page.

Wondering what will enter the public domain through copyright expiration in the U.S.? Like last year, and the year before...Nothing (apart from unpublished works whose authors died in 1947).