Trimalchio in Newburyport: Timothy Dexter’s A Pickle for the Knowing Ones (1848)

Timothy Dexter, A Pickle for the Knowing Ones (Newburyport: Blanchard & Sargent, 1848).

“Never since the Flood has there lived a man so little appreciated as Timothy Dexter”, wrote a later biographer of this eccentric, eighteenth-century businessman. Born near Boston in 1747, Dexter began life as a leather dresser, earning his living by crafting garments with techniques disseminated from the Levant. He took a financial position in the success of American independence, wagering his wife Elizabeth Frothingham’s dowry by going long on depreciated Continental currency after the Revolutionary War (a strategy copied from John Hancock). With the debt-addressing measures introduced through Alexander Hamilton’s financial plan, Dexter’s notes were redeemed at par, making him a wealthy man almost overnight.

This was but the beginning of an odd assortment of undertakings, successes, and controversies. Most notable: a strange 1797 text with literary ambitions, written in Dexter’s personal eye dialect and entirely devoid of punctuation. Boasting that his work would be remembered once Shakespeare and Milton were forgotten (and not until then), he responded to critics of his style by furnishing all subsequent editions of A Pickle for the Knowing Ones with a supplemental page of full stops, commas, and exclamation points: “Nowing ones complane of my book the fust edition had no stops”, explains the author. “I put A nuf here and thay may peper and solt as they please”. 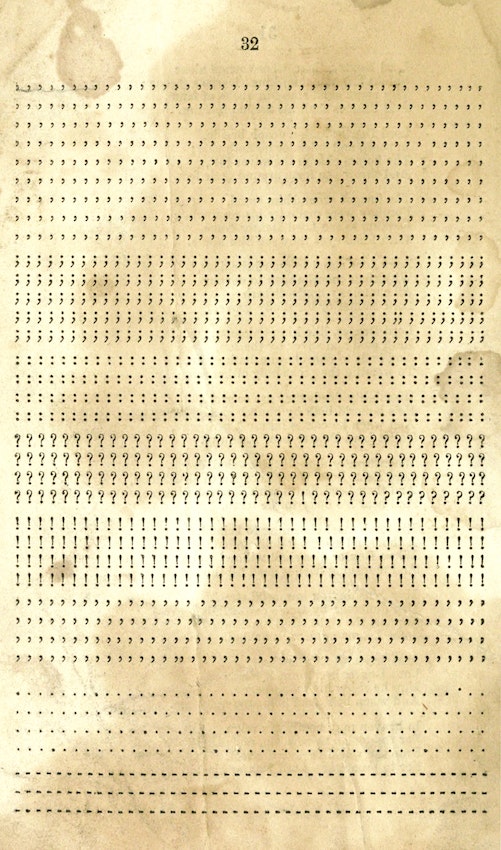 Page of supplemental punctuation, from Timothy Dexter, A Pickle for the Knowing Ones (Newburyport: Blanchard & Sargent, 1848) — Source.

Dexter’s life itself reads like literary fable — a Trimalchio reborn in New England, whose wealth afforded him everything but what he really desired: respect. Self-educated, he served as the elected Informer of Newburyport, Massachusetts, tasked with enforcing laws regarding the slaughter of deer. Each week, he synchronized his vast clock collection, and the device that ran truest (or “behaved best”, in his words) was baptized with a grandiose title. He kept a court of confidantes, including a personal poet laureate whose name, Jonathan Plummer, perhaps reflects the man’s talent with verse — “Lord Dexter, like king Solomon, / Hath gold and silver by the ton” — and the upper-class Lucy Lancaster, daughter of a formerly enslaved African king, who provided both council and mitigation: “If Dexter loaded a gun to shoot some one, Luce was sent for”.

Other anecdotes are even less credible. Tricked into shipping coal to Newcastle and opening a warming-pan business in the West Indies, it is said that Dexter turned a profit against all odds — his fossil fuel arrived during a miners’ strike; the bed warmers proved vital to molasses refinement. A man of supposedly open mind and stentorian voice, Dexter had violent tendencies that intensified through his flirtation with the “insanity of inebriation”, delivering soused oratories at dinner parties that commenters found “truly Ciceronian”. He staged his own mock funeral, complete with a mahogany coffin and sun-lit tomb for the self-styled “first Lord in Amerika”, and interrupted the service by viciously caning his wife in the kitchen, as punishment for her dry eyes. (His son, also inebriated, escaped a beating when his inability to hold himself upright was mistaken for grief.) Dexter later commissioned a statuary for the family garden, placing his likeness among busts of George Washington and Thomas Jefferson, which bore the inscription: “the greatest philosopher in the known world”. A published obituary, following his swift decline in 1806, remembered Dexter as “truly ridiculous”, possessing “intellectual endowments not being of the most exalted stamp”. 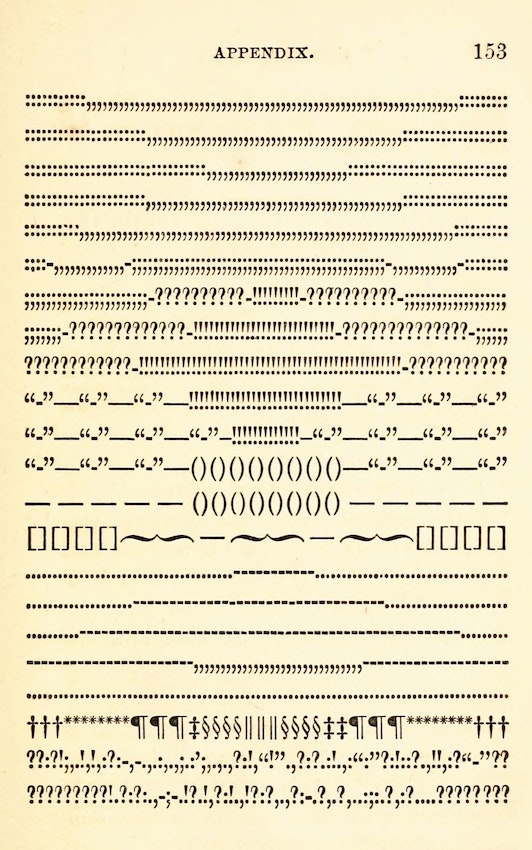 Page of supplemental punctuation, from Samuel L. Knapp, Life of Lord Timothy Dexter; with Sketches of the Eccentric Characters that Composed his Associates (Boston: J. E. Tilton and Company, 1858) — Source.

Despite numerous other exploits, Dexter’s voice survives through his literary endeavor, A Pickle for the Knowing Ones, a muddled rant targeting politicians, religious officials, and his own wife, which contains a theological excursus on man’s place in the animal kingdom:

If you can bare the trouth I will tell the trouth man is the best Annemal and the worst all men are more or Less the Divel but there is sit of ods sum halfe sum three quarters the other part of beast of Difrent kind of beasts sum one thing and sum a Nother sum Like a Dog sum Lik horses sum bare s Cat sum Lion sum lik ouls sum a monkey sum wild Cat sum Lam sum A Dove sum a hogg sum a oxe sum a snake. . .

Self-published and distributed for free, A Pickle was sought-after by eager readers and would-be ridiculers, stretching into eight print runs. Even so, it quickly became a rare book — Dexter’s biographer Samuel Knapp (1784–1838) was unable to find a copy during his life — until it underwent several subsequent reprintings in the nineteenth century. Perhaps more interesting than the text itself are the supplemental pages of punctuation, which vary between extant editions. A version appended to an 1858 volume of Knapp’s biography features tildes, double daggers, and dashes of various lengths. Arranged with an unexplained symmetry, the page appears almost like concrete poetry, as if anticipating later avant-garde works such as Christian Morgenstern’s typographical “Fisches Nachtgesang”.

Antics aside, Dexter has had a lasting, if sometimes uncoveted, place in American letters. “I am afraid that Mr. Emerson and Mr. Whitman must yield the claim of declaring American literary independence to Lord Timothy Dexter”, a writer who “makes his own rules of rhythm, so far as there is any rhythm in his sentences”, thought Oliver Wendell Holmes. There is something almost modernist about A Pickle’s neologisms, the printed voice of a Revolution-era eccentric, and how they are haltingly joined through his listing cadence. One begins to wonder if Lucy Ellmann’s full-stop-eschewing Ducks, Newburyport (2019), whose title and plot involve Dexter’s hometown, bears a debt to this strange book.