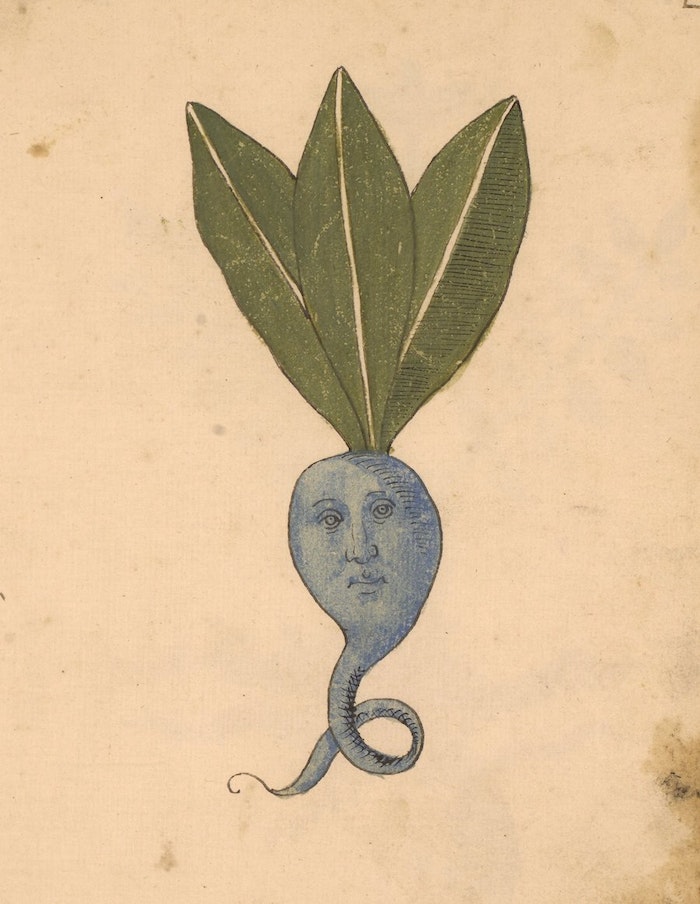 This wonderful 15th-century herbal hails from northern Italy (mostly likely the Veneto) and contains a few different kinds of illustration styles, evidence of a series of augmentations to the manuscript made across several generations. It started life out in the early fifteenth century as a set of around seventy highly stylised paintings of plants, whose patterns, human faces, and other fantastical elements broadly follow medieval conventions (in particular the Pseudo-Apuleius herbal tradition). Sometime later in the century, as Karen M. Reeds writes “the bound manuscript of 100 folios was, in effect, interleaved”:

watercolors of still more plants were painted on many of the versos and on both sides of the folios previously left blank. At the same time, labels and some herbal texts in Italian, written mostly in sepia ink, were added. In technique, in descriptive detail, and choice of colors, these watercolor illustrations contrast strongly with the Pseudo-Apuleius figures on the facing rectos...

Among this second set is a subset of markedly more naturalistic images, perhaps painted directly from specimens, or at least very good drawings. Finally, at the very end of the manuscript is a “nature print” of a single leaf labeled Salvia salvaticha, with the handwriting of its note indicating it was done by this same person behind the second set of additions (see final image below).

It’s the original set — with its anthropomorphised vegetation and dragon-shaped roots — which we’ve been mostly drawn to in our highlights below, but you can have a look at the original on the Penn Libraries site (Ms. LJS 419) to get a sense of the full range of interleaved styles in this remarkable manuscript.