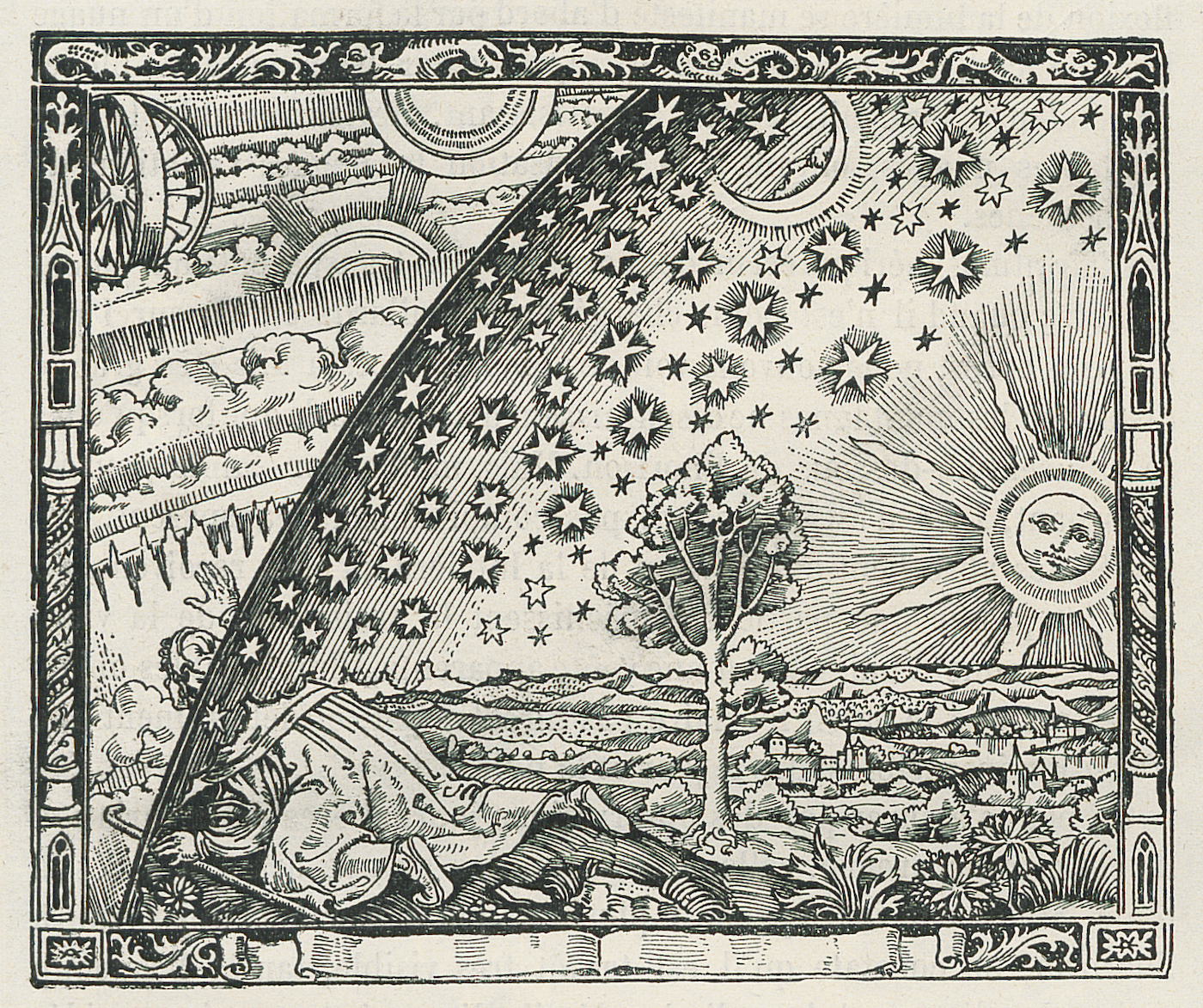 A man crawls to the ends of earth. He has journeyed for days under the light of a splendorous sun, passed his nights beneath a firmament shot through with stars. There is no reason to look back toward his origin: everything that came before appears at toytown scale against the enormity of his present purpose. Crouching down to explore a seam, the suture where sky and ground meet, the traveler pushes his head through the celestial vault and out into the heavens beyond. Curtains of flames replace the alchemical sun of his old world. In this lacerated empyrean, the planetary bodies move like clockwork — a cosmic machinery whirring along in adherence to laws yet to be discovered, whether natural or divine.

Seemingly first published in astronomer and science fictionist Camille Flammarion’s (1842–1925) L’atmosphère: météorologie populaire (1888), this image has puzzled enthusiasts of the scientific mystic’s works, both for its obscure provenance and cryptic symbolism. With its pastiche of Renaissance visual style and medieval caption — “A missionary of the Middle Ages tells that he had found the point where the sky and the Earth touch” — the illustration was once thought to have originated centuries before Flammarion published his text. The artist remains uncertain, but early interpreters believed he or she was a contemporary of the paradigm shift that the work seems to depict: when ancient cosmogony gave way to the Scientific Revolution. Heinz Strauss and Heinrich Röttinger dated the engraving to the mid-sixteenth century, while Erwin Panofsky, writing in 1963, found its style indicative of the seventeenth. On the other hand, Ernst H. Gombrich, speaking on behalf of the Warburg Institute, was convinced that the engraving had to be a more-recent homage to the Renaissance. The artist employed a stippling technique, for example, not used before the late eighteenth century. A skilled draftsman, it is feasible that Flammarion created the image himself, although it differs slightly in style from his other artworks.

More mysterious than its provenance is the work’s potential meaning. As Stefano Gattei enumerates, in a book chapter that promises to “close the debate” on Flammarion’s engraving, the stooping man has been variously described as “a missionary, a skeptic, a wandering Jew, a researcher, a traveler, a learned man contemplating divine wonders, a pilgrim, or an Earth-bound frustrated astronomer.” Part of the difficulty here comes from the image’s symbolic polyphony: aspects of the Ptolemaic universe mingle with a prominent ofan — the wheeled structure that resembles a gyroscope, which Ezekiel and David glimpsed in their vision of God’s throne — layering astrological and esoteric iconography. For many, this singular image, of a man passing beyond the world’s limits, feels indebted to a problem of bounded finitude that arises in commentaries on Aristotelean cosmogony and theological genesis. If the universe is finite, how can its limits (or creator) lay within it?

Below you can read the text that originally accompanies this engraving in Flammarion’s L’atmosphère as well as passages from other works by Flammarion, gathered by Stefano Gattei, that seem to anticipate it.

Whether the sky be clear or cloudy, it always seems to us to have the shape of an elliptic arch; far from having the form of a circular arch, it always seems flattened and depressed above our heads, and gradually to become farther removed toward the horizon. Our ancestors imagined that this blue vault was really what the eye would lead them to believe it to be; but, as Voltaire remarks, this is about as reasonable as if a silk-worm took his web for the limits of the universe. The Greek astronomers represented it as formed of a solid crystal substance; and so recently as Copernicus, a large number of astronomers thought it was as solid as plate-glass. The Latin poets placed the divinities of Olympus and the stately mythological court upon this vault, above the planets and the fixed stars. Previous to the knowledge that the earth was moving in space, and that space is everywhere, theologians had installed the Trinity in the empyrean, the glorified body of Jesus, that of the Virgin Mary, the angelic hierarchy, the saints, and all the heavenly host.... A naïve missionary of the Middle Ages even tells us that, in one of his voyages in search of the terrestrial paradise, he reached the horizon where the earth and the heavens met, and that he discovered a certain point where they were not joined together, and where, by stooping his shoulders, he passed under the roof of the heavens.

The Earth looks like an immense plain, rugged by a thousand kinds of facets and reliefs, green hills, flowery valleys, mountains more or less high, meandering rivers in the plains, lakes with cool shores, vast seas, infinitely varied countryside. This land seems to us fixed for eternity, sitting on century-old foundations, crowned by a sky at times pure and at times cloudy, extended so as to form the unshakable foundation of the universe. The Sun, the Moon and the stars seem to turn around her. From all these appearances, man has easily believed himself to be the centre and the purpose of creation, a vain presumption that he held for a very long time, as there was no one to contradict him.

This fact reminds us of the story Levayer relates in his Letters. It seems that an anchorite, probably a nephew of the Fathers of the Eastern deserts, boasted of having been to the farthest edge of the world, and of having been forced there to bend his shoulders, due to the meeting of heaven and Earth at that very end.