Images of Hatha Yoga from the Joga Pradīpikā (19th century) 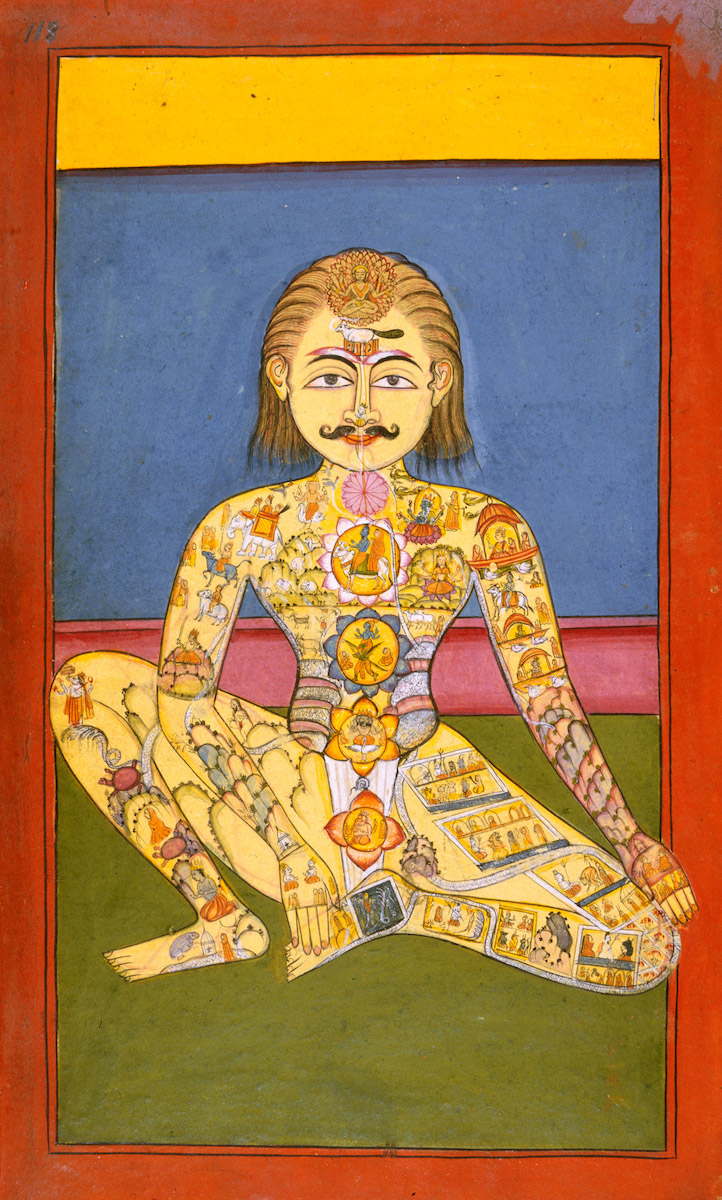 This final image in the series relates to Kundalini yoga. The symbols explain how the different parts of the body work when you do yoga, each symbol having an individual meaning.

Yoga is now everywhere in the West. For some, it is connected to an ancient, ethical philosophy, “a way the sacred can come into life”, according to Stephen H. Phillips. For others, it has become a glorified stretching routine, a warm-up to be completed while decked out in athleisure garbs.

Modern yoga, defined by Elizabeth De Michelis as “the graft of a Western branch onto the Indian tree of yoga”, dates back to the 1800s. De Michelis locates an origin in a letter penned by Henry David Thoreau, claiming that “To some extent, and at rate intervals, even I am a yogi” — one of the first recorded instances of yoga being “taken up by a Westerner while remaining a Westerner”. But the Classical Yoga of the Indian subcontinent has been evolving for thousands of years and can be found in various forms in the texts sacred to Hinduism, Buddhism, and Jainism. Yoga is difficult to define because of its fractured immensity. The word refers to “that enormous body of spiritual values, attitudes, precepts, and techniques that have been developed in India over at least five millennia”, claims Georg Feuerstein in his canonical The Yoga Tradition. And James Mallinson and Mark Singleton, in composing their Roots of Yoga for Penguin Classics, found it necessary to translate yogic texts from Tibetan, Arabic, Persian, Bengali, Tamil, Pali, Kashmiri, Old Marathi, Avadhi, Braj Bhasha, and English.

The nineteenth-century images collected here concern hatha yoga, one of the most widely practiced modern forms, the yoga of physical discipline. As Singleton notes, however, bodily movements were historically subordinate to breathwork (pranayama), mental focus (dharana), and the yoga of sonic vibrations (nada). Only in the twentieth century, paralleling a rising Indian nationalism, does the corporal dimension begin to dominate, as certain physical strands of the yogic tradition melded with European gymnastics, creating a system to train the body in preparation for anti-colonial resistance.

But these images precede the exportation of hatha to the West, finding their origin in the Joga Pradīpikā, an eighteenth-century text credited to Ramanandi Jayatarama, which combines older kinds of seated meditation with the physical methods of tantra. On display are both asanas (body postures) and mudras (hand gestures or “seals”). While the former positions promote both physical and spiritual alignment, the origins of the latter gestures remain obscure, with Feuerstein claiming that “they undoubtedly are the products of intensive meditation practice during the course of which it is not uncommon that the body spontaneously assumes certain static as well as dynamic poses”. This is the mystery and power of yoga on exhibit here — the potential for the body and mind to spontaneously transform through subtle and exacting movements.

For a history of hatha yoga’s physicality and the Joga Pradīpikā, you can watch James Mallinson’s interview with the British Library here. And you can purchase Mallinson and Singleton’s Roots of Yoga by following this link.