Music in the Margins: The Funeral of Reynard the Fox (13th century)

This motley crew of anthropomorphic animals can be found adorning the lower margins of a finely illuminated "book of hours" produced in late thirteenth-century England and now residing in the collection of the Walters Art Museum in Baltimore. Appearing throughout a section relaying the crucification of Christ, these horn-tooting, cymbal-beating, bier-bearing creatures are attending the funeral of Reynard the Fox.

Thought to have originated in Lorraine folklore, the tale of the trickster fox Reynard soon made its way into a literary cycle of allegorical Dutch, English, French and German fables, getting its most extensive treatment via the pen of Pierre de Saint-Cloud in his Le Roman de Renart, ca. 1170. Written mainly during the Middle Ages by a multitude of authors, the Reynard stories often acted as parodies of medieval literature staples (e.g. courtly romances), as well as satire commenting on political and religious institutions. Reynard's funeral appears in many of the tales: his enemies gathering to deliver weepy, over-the-top elegies full of insincere piety, only to then come a cropper as Reynard leaps alive from the bier and wreaks his revenge.

These Reynard stories were so popular that the the old French word for "fox" (goupil from the Latin vulpecula) actually ended up stepping aside in favour of "renard" still used today. 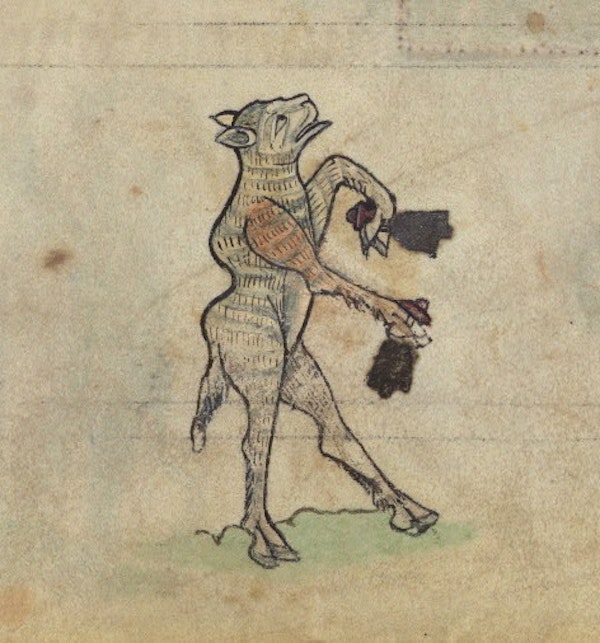 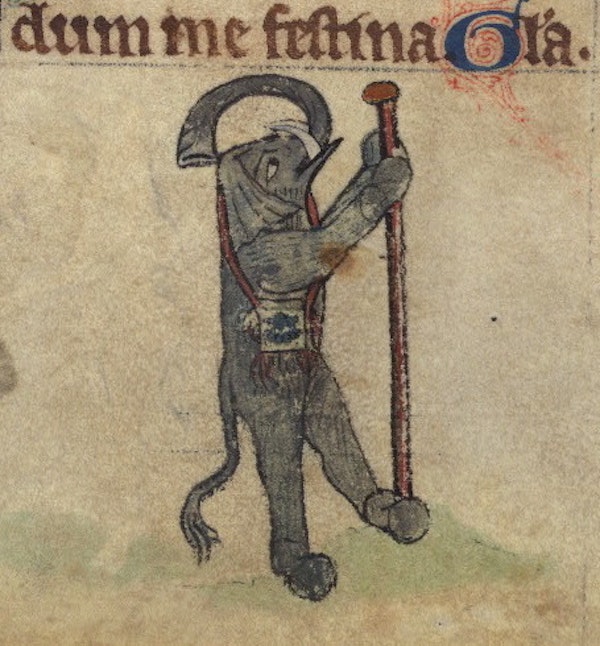 Elephant as a pilgrim, detail from fol. 73r. 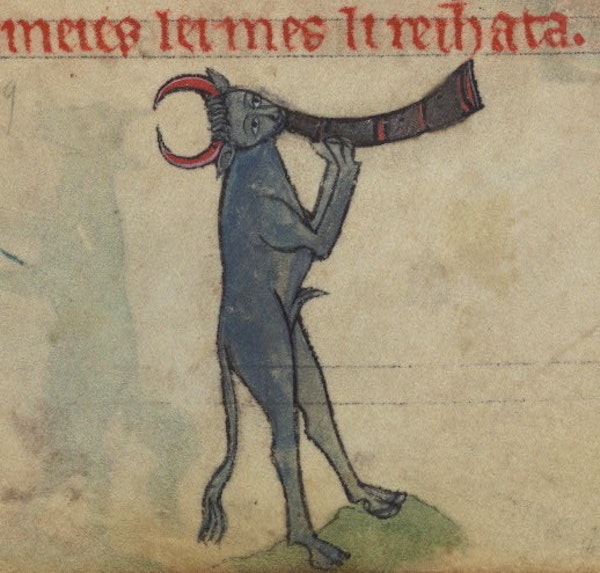 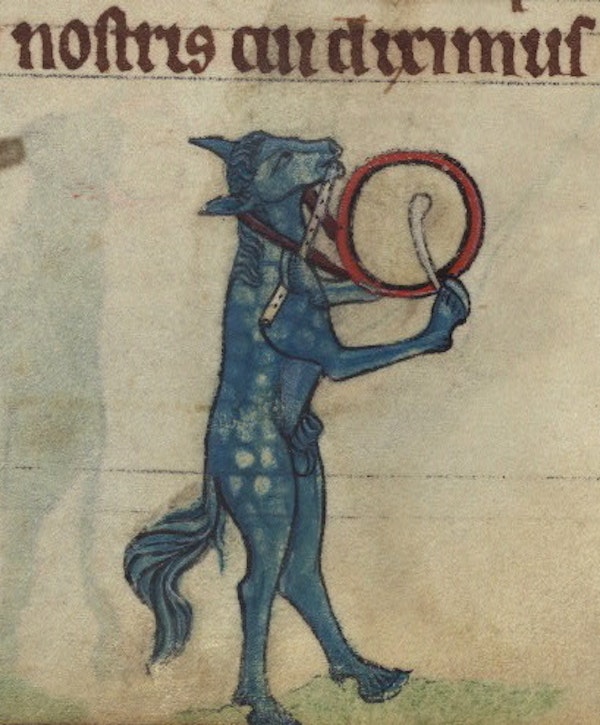 Horse playing a flute and drum, detail from fol. 74v. 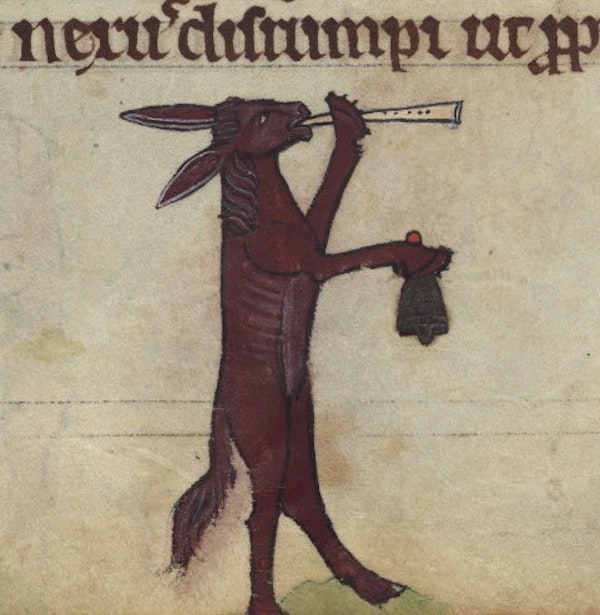 Ass playing a recorder and bell, detail from fol. 75r. 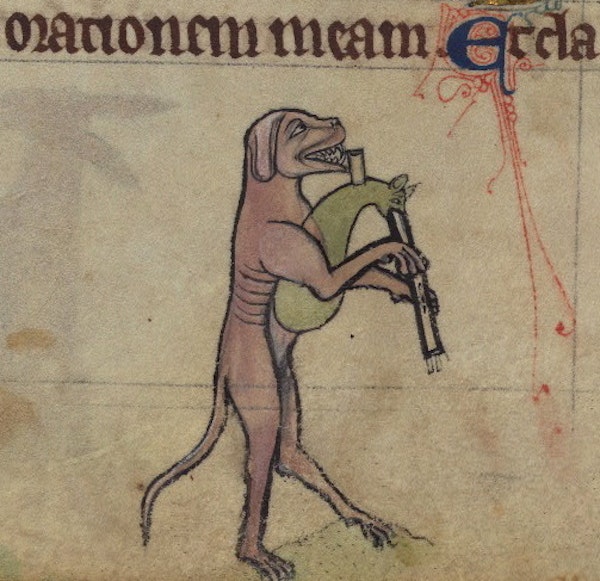 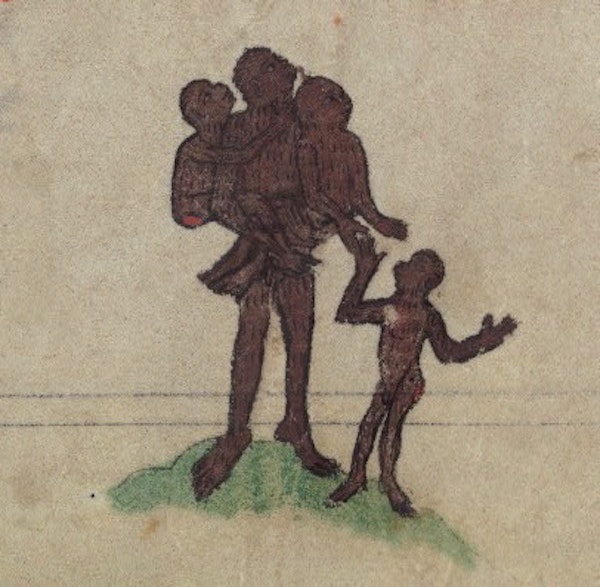 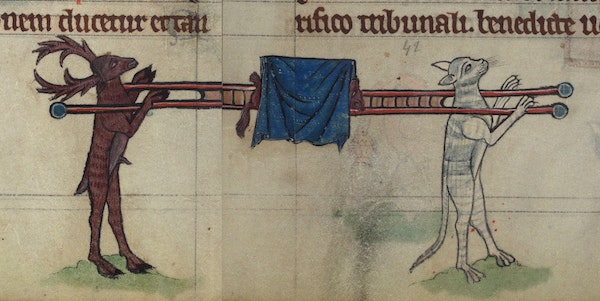 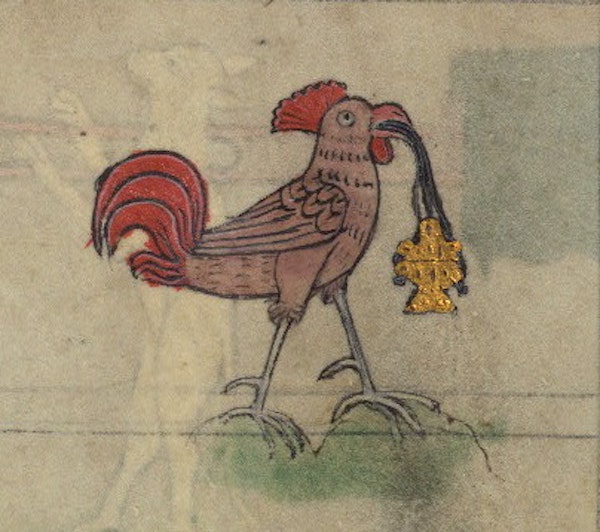 Chanticleer the Cock swinging a censer, detail from fol. 77v. 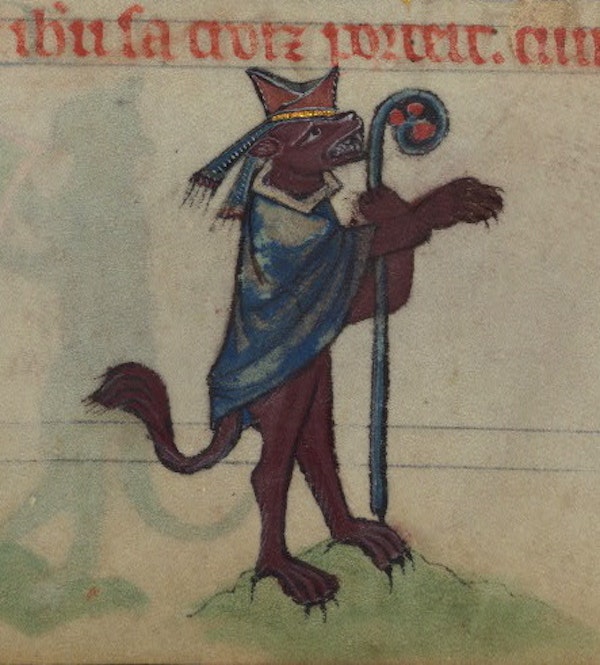 Ysengrin the Wolf (arch enemy of Reynard) as a bishop, detail from fol. 78r. 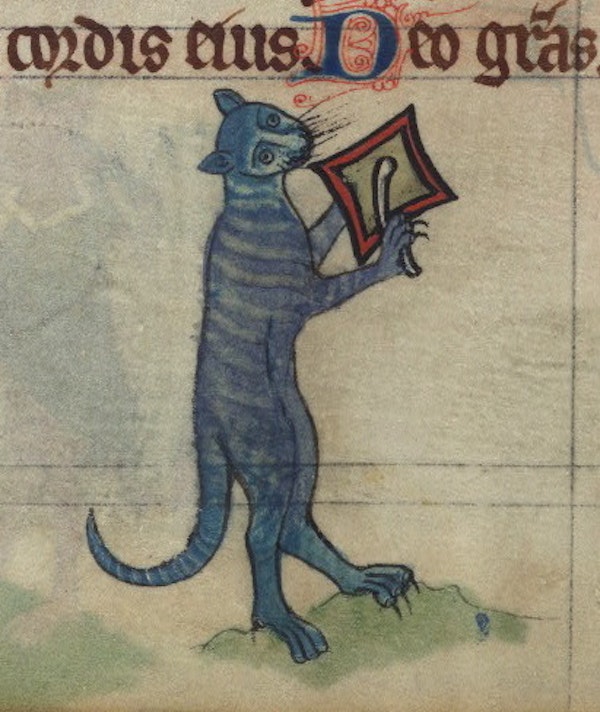 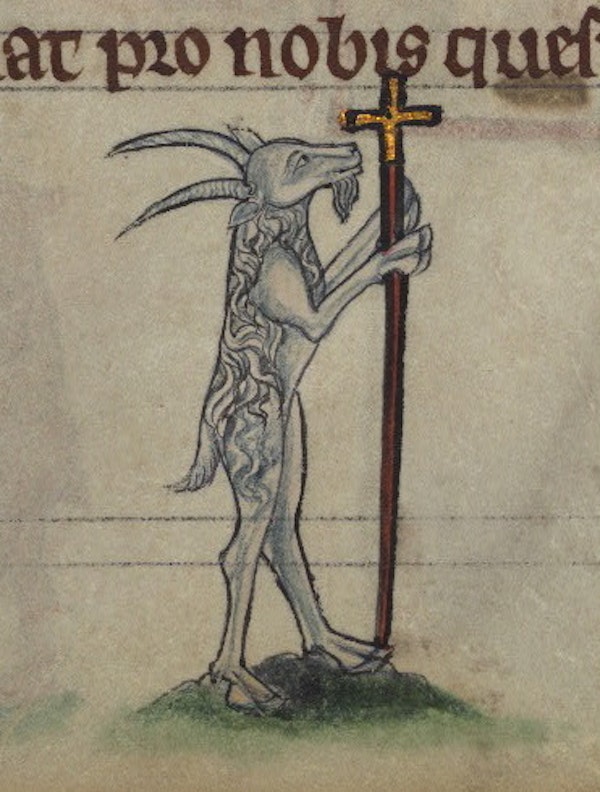 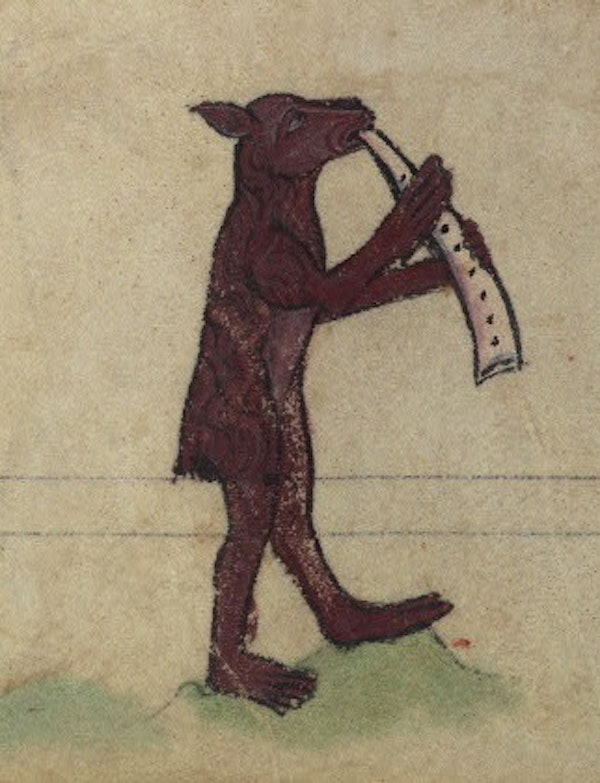 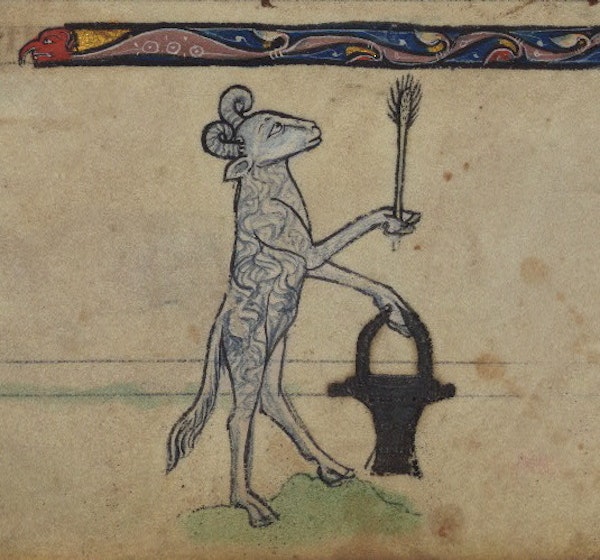 Ram, with situla, sprinkling holy water with an aspergillum, detail from fol. 80r. 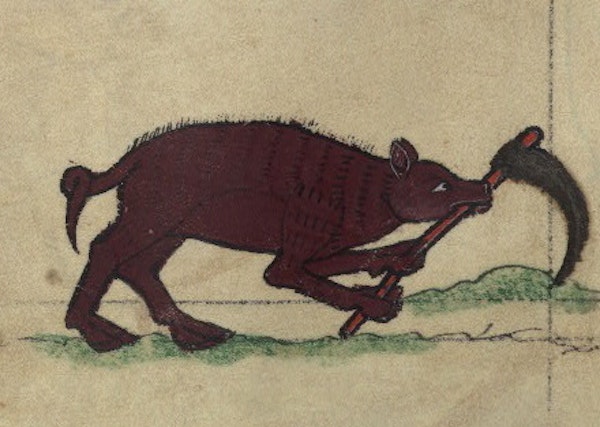 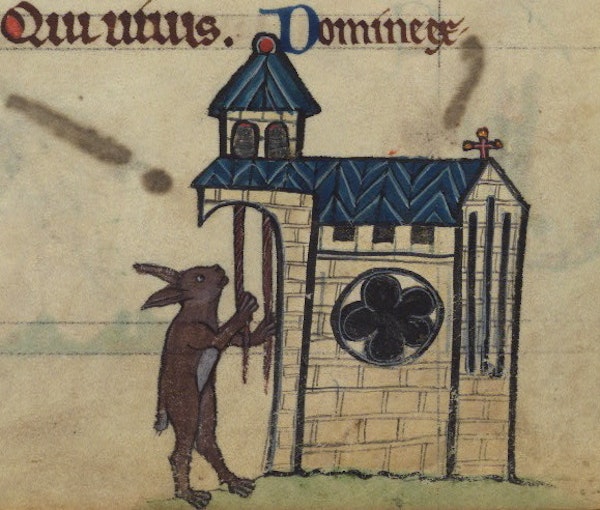