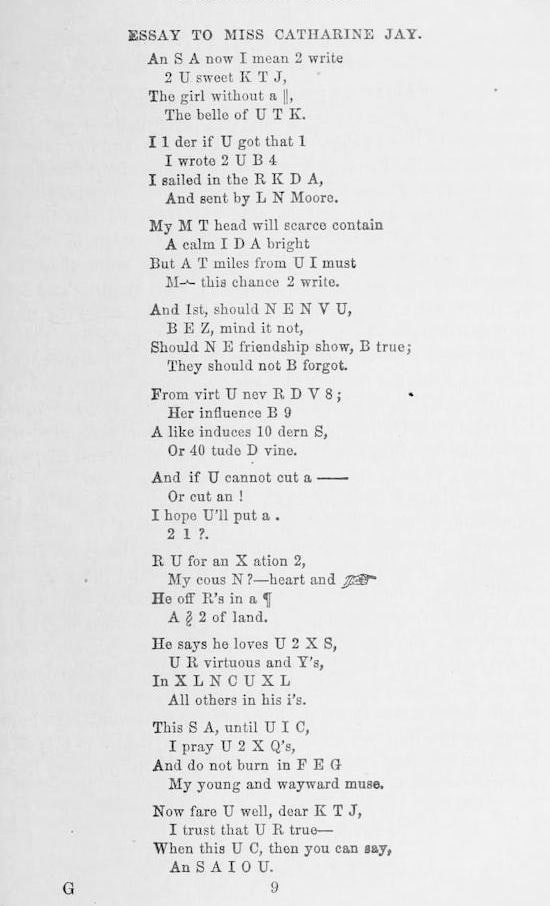 Long words can be mellifluous, pulchritudinous, even pericombobulating things to behold. But sumtimes we jst nd 2 get 2 da pt. The very earliest writing, by the Sumerians circa 3000 BCE, was in pictographs. These representations of discrete ideas in small pictures, these proto-emojis, continued life in the early modern era, in places like Le Petit Livre d’Amour where we see “cœur” replaced by a ❤️. But from the ancient Greeks onwards, rather than draw pictures, writers striving for concision in alphabetic languages have usually preferred to omit non-crucial letters. Abbreviation of this kind had an unexpected renaissance with “textspeak”, a sublanguage formed in the 160-character-limited SMS (short message service). On early mobile phones you had to type each message on awkward little keys designating up to four letters. These spatial constraints, along with the simple desire to communicate quickly, gave rise to some wonderful abbreviations and acronyms — even if some take the receiver more time in the decoding than save the sender in the composing (e.g. “CURLO: See you around like a donut”).

Two nineteenth-century precursors to textspeak, both hotbeds of radical concision, were the telegram and shorthand. Shorthand had been around since the ancients but the famously innovative Victorians devised a host of new systems. Isaac Pitman, the creator of Stenographic Soundhand, opined that when people correspond by shorthand, “friendships grow six times as fast as under the withering blighting influence of the moon of longhand.” Though Dickens joked in David Copperfield that to acquire "a perfect and entire command of the mystery of shorthand writing and reading was about equal in difficulty to the mastery of six languages". As for telegrams, companies used to charge by the word, so correspondents would leave out unnecessary ones as well as punctuation, to produce messages with a distinct clipped style. And when telegraph operators communicated directly to each other, they would abbreviate words too.

It is this “telegramese” that provides the context for the comic love poem we've featured above. “Essay to Miss Catharine Jay” appears in C.C. Bombaugh’s excellent Gleanings for the Curious from the Harvest-Fields of Literature: A Melange of Excerpta (first published 1867). Its elliptical style – “I wrote 2 U B 4” (line 6) – bears an uncanny resemblance to the textspeak that would flower 150 years later. The bathos of the following four lines is particularly wonderful, their descent from sophisticated abbreviation work at the end of the first and third lines into something pretty teenaged at the end of the second and fourth:

Though a fine example, Bombaugh’s poem is not the first of its kind. It is based on a number of similar poems that appeared in newspapers and magazines on both sides of the nineteenth-century Atlantic. The following example was published in an 1828 issue of The New Monthly Magazine. 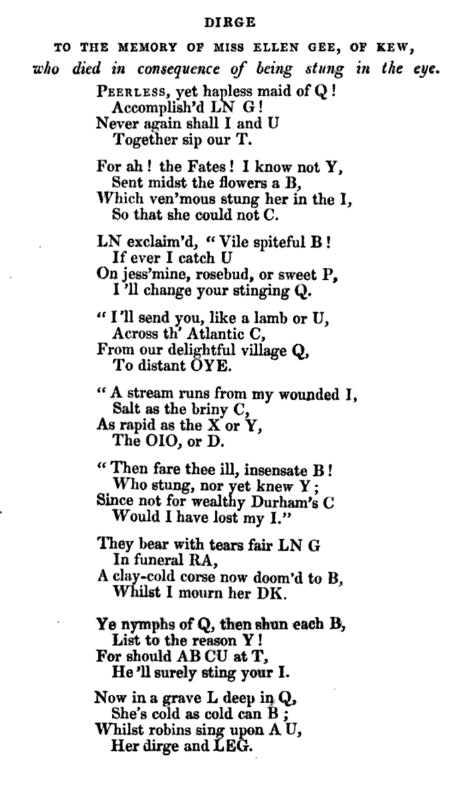 And here, in a subsequent issue in the same year, a riposte (an annotated version of which you can see at this great article on Visual Thesaurus). 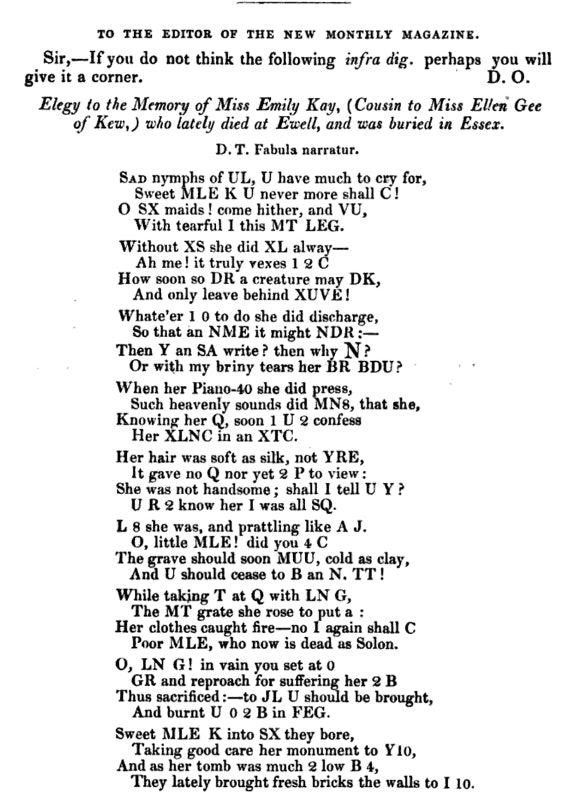 best of language and communication24