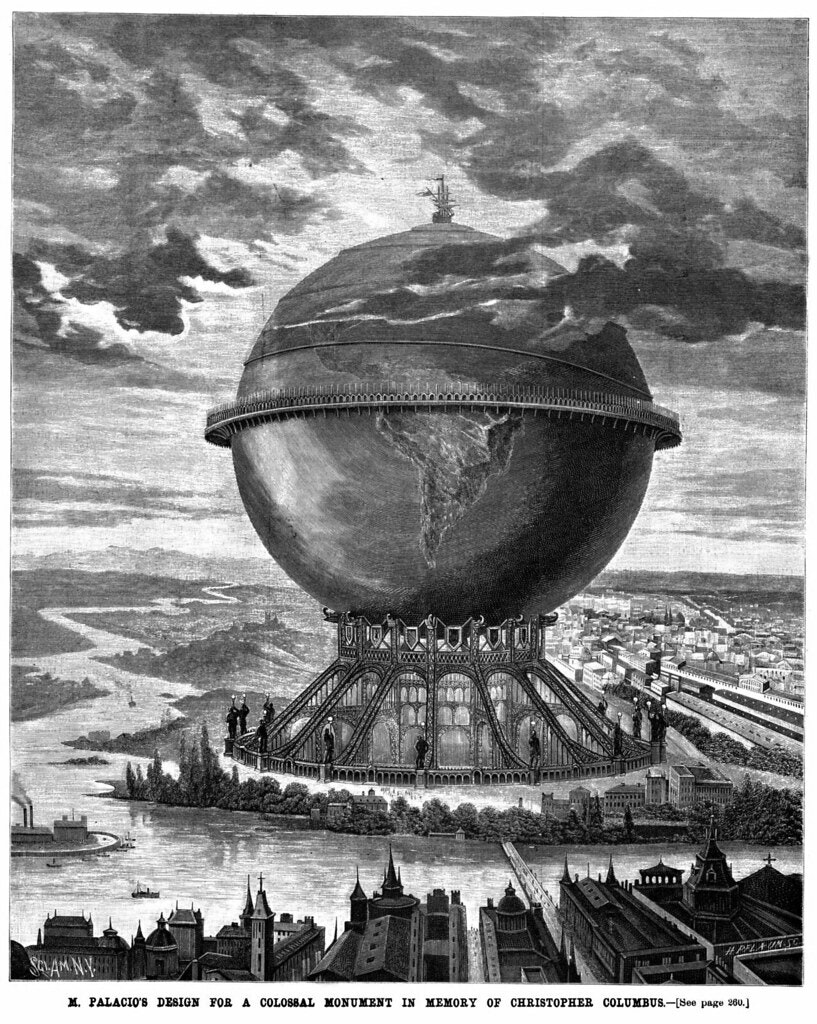 Appearing in the October 1890 issue of Scientific American magazine, the engraving above is an artist's rendering of the truly gigantic monument planned by the Spanish architect Alberto Palacio in honour of Christopher Columbus. The structure was designed for the 1893 Chicago World's Fair, an event to celebrate the 400th anniversary of Columbus' arrival in the New World in 1492. The globe of Palacio's design was envisaged to be nearly 1000ft in diameter and to house a spiralling stairway circumambulating its surface - internal until the equator and then external for the northern hemisphere portion, reaching finally the north-pole where sits an enormous copy of one of Columbus' caravel ships (whose hull would house a meteorological observatory). At night the shapes of the continents would be illuminated by a huge number of lights casting beams from below. In the base would be a statue-littered institutional complex dedicated to the natural sciences and geographical exploration, as well as a network of promenades, cafes and restaurants for the public. Not unsurprisingly Palacio's ambitious vision was never realised as physical reality, but if it had it would have cost an estimated $6 million plus - probably something close to $7 billion in today's money. 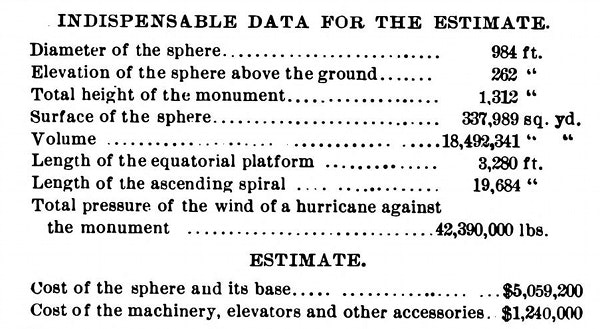 Below is a transcript of the Scientific American article - "M. Palacio's Design for a Colossal Monument in Memory of Christopher Columbus" - for which the engraving was made.

M. Palacio's Design for a Colossal Monument in Memory of Christopher Columbus

The construction of the Eiffel tower has awakened the pride of the nations. It is said that North America proposes to construct an iron tower which shall be higher than the one in Paris. England also desires to have a monumental tower.

When North America proposed a competition for the construction of a tower to be erected at the Universal Exposition of 1892, a Spanish architect, a native of Bilboa, Mr. M. Alberto de Palacio, drew an original de-sign, of which we publish an engraving.

Mr. De Palacio has conceived a most perfect form, the sphere, which could not have been used prior to the knowledge of iron as a building material, because only by the modern methods of uniting the various parts, of which this material is susceptible, could a sphere be produced with a diameter of nearly 1,000 feet, that is, equal to the height of the Eiffel tower. This idea symbolizes the geographical completion of the earth which was realized by Christopher Columbus' discovery of the New World.

The following is a description of the magnificent design : The colossal sphere is mounted on a base which is 262 feet high, and is crowned at its North Pole by the caravel which carried Columbus to the New World. The monument is brilliant with the colors of the continents, oceans and islands of the terrestrial sphere.

The sphere will be encircled at the equator by a platform 3 280 feet, or more than half a mile, long. An exterior spiral running around the northern hemisphere will form a track nearly two miles long, leading from the equator to the North Pole. At night the sphere will be illuminated by the lines of light which will form the outlines of the continents and islands, thus casting over the city torrents of refulgent brilliancy. The great pyramids of Egypt, the Sphinx, and the Colossus could lie in the hollow interior like jewels in their case. So much for the exterior aspect.

An interior track runs around the southern hemisphere from the South Pole to the Equator, where it joins the exterior spiral. The total length of the spiral is nearly four miles, over which the sightseer can travel on a tramway.

In the base and under the majestic central rotunda will be placed a gigantic statue of the great discoverer surrounded by the navigators and missionaries who rendered his discovery fruitful. In the semicircle around this Olympus of heroes, inclosing the amphitheater, will be allegorical statues representing all the Spanish nations.

In the remaining spaces of the compartments in the base a large Columbus library will be distributed ; auditorium for the cultivation of the natural sciences, museums of zoology, mineralogy, and botany of America, rooms for the Spanish Geographical Society, a great naval museum in the interior central compartment, a meteorological observatory in the hull of the caravel. All this is independent of the promenades, cafes, and restaurants for the public.

In the interior the celestial sphere can be exactly reproduced. It can also be used for magnificent panoramas, because the spherical form is the best for obtaining illusions of perspective. There will be a place for public entertainments.

This astonishing monument can serve as a perennial remembrance of the first Spanish-American and Colonial Exposition.

Mr. Palacio secures the stability of this immense mass by means of a simple method similar to that used for equestrian statues, so that the sphere will be able to resist winds of greater force than a cyclone.

From a business point of view Mr. Palacio makes the following calculation :

One hundred thousand spectators paying an entrance fee of $1, will bring $100,000. This will replace the capital in 62 days, without counting the profits of the cafes, entertainments, etc. The estimated total cost is $6,000,000.

INDISPENSABLE DATA FOR THE ESTIMATE.

Total pressure of the wind of a

The architect, Mr. Palacio, is the designer of the movable bridge at Bilboa, used in connection with the submarine railway of Orton on the coast of Spain.—La Ilustracion Espanola y American