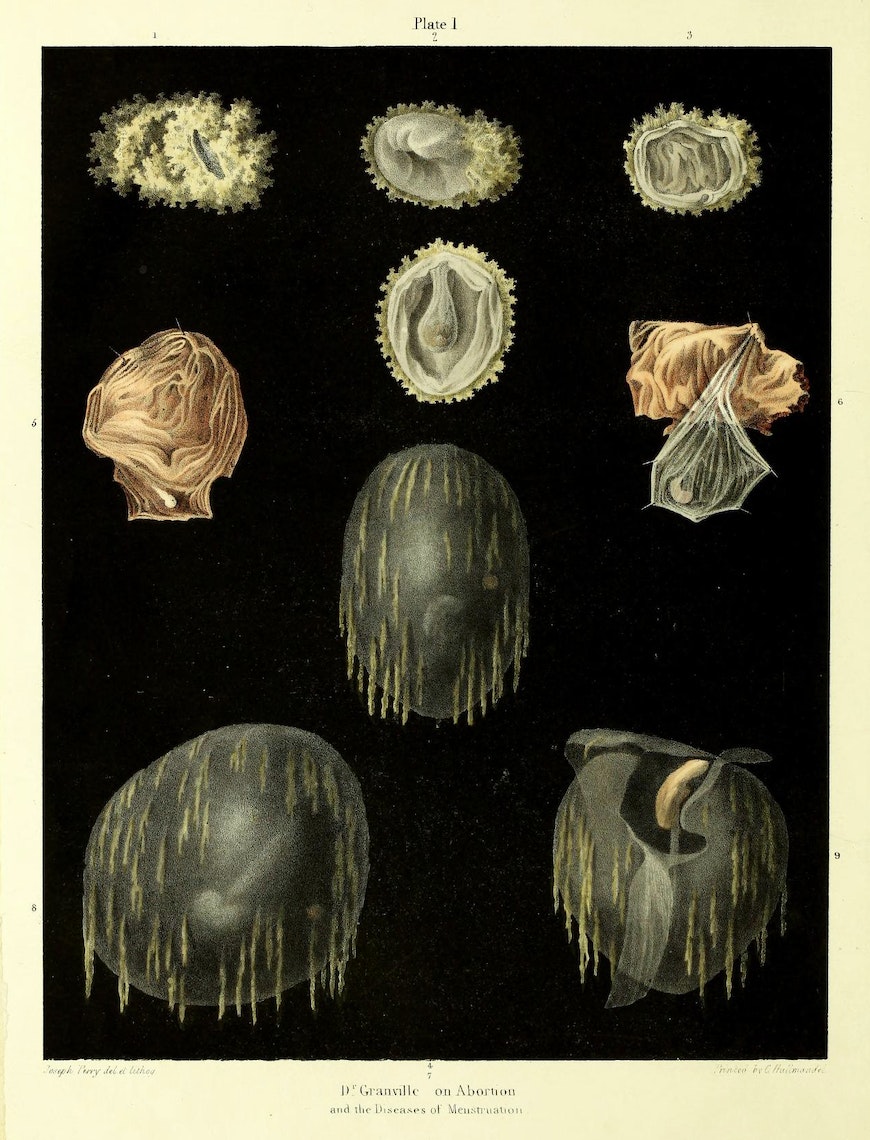 On an unrecorded day in 1827, a woman in the first trimester of pregnancy suffered her sixth, perhaps seventh miscarriage. In the remarks written on her case, it is said that she endured three premature losses for every two successful pregnancies, and “her general health was greatly impaired” in the process. Most likely, she labored between her sweat-soaked and blood-soiled bed sheets, with a midwife watching nearby. Maybe it was a warm morning, in a small home where the walls grew slick with condensation. Heavy breathing and humidity. Maybe the breath was hers, hurried, alongside that of several children huddled outside in the hallway. Maybe her husband kept as close as he could, grave with concern. Or maybe, after so many consecutive losses, he was left feeling almost unfazed. One thing is certain, the woman and the midwife went about their painful work. And when, with a final push, the gestational sac, embryo, and placenta were passed, the midwife promptly collected them and took leave. She hurried through the streets of London until she reached the workplace of the Italian doctor and author, Augustus Bozzi Granville (1783–1872). In the midst of perfecting his book, Graphic Illustrations of Abortion and Diseases of Menstruation, Granville summoned his engraver, Joseph Perry, to perpetuate these particular tissues of miscarriage in detailed, undiminished lithographic color. It now bears the title: Plate 2, Figure 12.

Granville’s book is full of illustrations with similarly grim origins. Published in 1834, the terms abortion and miscarriage were still used somewhat interchangeably within the medical community. Granville himself asserts that his book deals solely with the losses that were spontaneous, a symptom of deeper illness or physiological dysfunction, and not those intentionally induced. Compiled over the course of roughly six years, it consists of twelve plates and upwards of forty figures. Figures which, in spite of the fact that fetal illustrations in utero were no longer particularly rare, are infused with a fantastical air of artistry.

As part of his introduction, Granville makes note of Dr. William Hunter, author of Anatomy of the Gravid Uterus Exhibited in Figures (1774), a compilation of black and white drawings based on the study of pregnant corpses. Hunter’s publication is extensive, intricate, and intimately detailed. Yet the monochrome, realist reproductions suffer from a starkness that Perry somehow circumvents. Most notably, Granville and Perry refrain from including illustrations of the women who died during troubled labors. Their bodies, rather than being nakedly displayed, are untouched by Perry’s pencil beyond the reproductive organs. Perhaps it is this focus on the isolated world of the embryo and fetus that makes each image feel so elusive, so aesthetically alien. And perhaps Granville reveals his affinity for this style when he quotes a fellow doctor: “It must be allowed that the generality of these things (the aborted ova) are preserved for their beauty, or as a matter of curiosity, rather than of use”. The illustrations become more than medical specimens, they are mementos, envisioning the organic beauty of the human body, as well as its brutality.

To modern viewers, the context of medical confusion adds an extra layer of mystery to each image. Plate 1 is a compilation of floating amniotic sacs, suspended in water so as to preserve their three-dimensional shape during dissection. Leached of color, the layered membranes appear dark, arcane, and orbicular. Green-tinged tissue hangs off their surface like tendrils of moss. In Plate 4, we are confronted by a nebula of nearly indiscernible matter. Potentially the reproduction of a rare molar pregnancy, this illustration strives to show tissue layered in dangerous excess. Still more plates present a fetus nestled secretly in a woman’s left fallopian tube. Or resting, in almost tranquil repose, on the outside of her uterus. In this way, every image is an opportunity to investigate the beliefs and misunderstandings of nineteenth-century obstetrics.

Each illustration is supported by a wealth of medical text: Granville’s explanations and remarks on the various cases he has encountered. The more elaborate these excerpts become, however, the clearer it is that Granville himself was still struggling to elucidate several aspects of reproduction. Given that most medical research up to this point was conducted on corpses, it is not surprising that there was lingering confusion over the act of conception. Granville acknowledges that fertilization takes place after sexual congress, but remains curiously quiet about the male’s role in this process, due to the contested role of spermatozoa in this period. He does, however, make frequent mention of Karl Ernst von Baer, a German scientist who served as a professor of zoology and anatomy at Konigsberg University. Baer had recently published Ovi Mammalian at Hominis genesi (1826), a book outlining his discovery of the mammalian ovum. It is clear then that Granville recognizes the female egg as a source of life, but he hits another scientific hurdle when he writes that fertilization of this egg takes place in the ovary rather than the uterus. Evidently, the mystery of conception still eluded explanation.