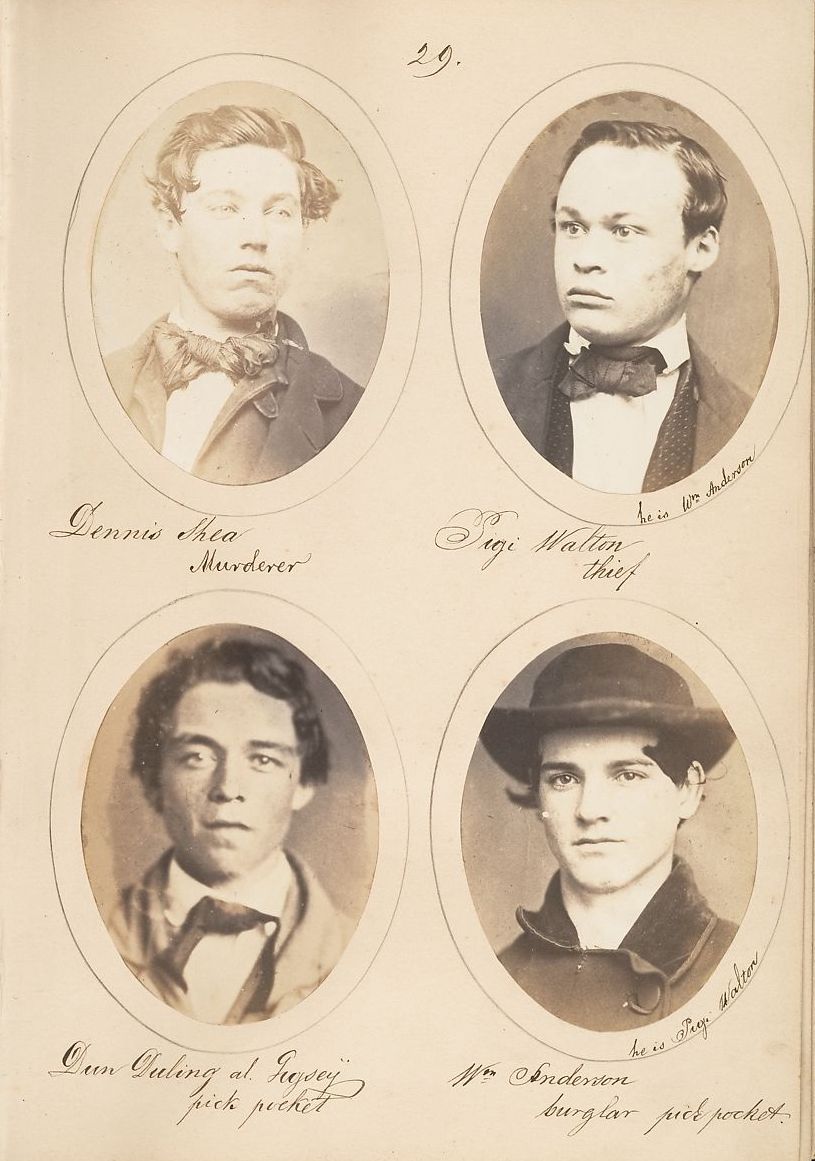 Celebrity photography begins with Mathew Brady. His groundbreaking 1850 book of daguerreotypes, The Gallery of Illustrious Americans, presented portraits of twenty-four of “the most eminent citizens of the American Republic”, ranging from the Unitarian preacher William Ellery Channing to the pro-slavery politician John C. Calhoun. The idea of the album was to present these men (and they were all men) as “representative” — just as, in the 1860s, Brady’s war photography, in Walt Whitman’s words, would gather together portraits of “typical men…from opposing parties and convictions, representing in their varieties and oppositions after all a Common Country”.

Samuel G. Szábo’s book Rogues, A Study of Characters, published six years after Brady’s Gallery, aims for another kind of representativeness — not of the eminent, but of the infamous.

Indeed, Rogues is one of the first collections of mug shots made available to the general public. The term “rogues’ gallery” had been coined by Allan Pinkerton of the Pinkerton Detective Agency two years earlier, but Pinkerton circulated his collection of mug shots only among law enforcement agents; the concept of a “rogues’ gallery” didn’t enter common parlance until it was used in the introduction to New York City police chief Thomas Byrnes’ book Professional Criminals of America in 1886.

In Szábo’s Rogues, there is no introduction, no statement of purpose — only captions listing the lawbreaker’s name, alias, and offense: murderer, counterfeiter, cracksman, pickpocket, or (an interesting distinction) French pickpocket. Still, it’s hard not to see Szábo’s gallery, like those of Brady, Pinkerton, and Byrnes, as participating in the nineteenth-century mania for identifying “types”. As Simon A. Cole writes in Suspect Identities: A History of Fingerprinting and Criminal Identification:

As soon as photography emerged as a method for recording the identities of known criminals, an irresistible temptation arose to use the same technology for something much more ambitious: to home in on the common physiognomic attributes of known criminals in order to have a picture of what criminals in general might look like and thus to identify criminals prospectively, even before they committed crimes.

It would be a mistake, though, to file away Szábo’s Rogues as just another example of early criminal identification. “One may speculate that Szabó made these portraits while working for, or with the cooperation of, the police”, the scholar Malcolm Daniel writes; yet Szabó signed the book as its “photographic artist”, and his subtitle (“a Study of Characters”) is not at all the same thing as a “study of the criminal character”. The men and women depicted by Szábo are individuals: some look menacing, some rakish, some simply miserable. Together, they provide a glimpse not only at the faces of mid-nineteenth century American lawbreakers, but at all the different ways mid-nineteenth century people sat, squinted, wore their hair, neckties, and hats.

Szábo himself is quite a mysterious character. Born in Hungary, he appears to have lived in the US only temporarily, from the early or mid-1850s until July 1861. During these years, he spent time in New Orleans, Cincinnati, Chicago, St Louis, Baltimore, Philadelphia, and New York City. Where he lived when he made this album, no one knows.

You can scroll through our highlights below.