Steam-Powered Tooth Extraction on an Envelope (1894) 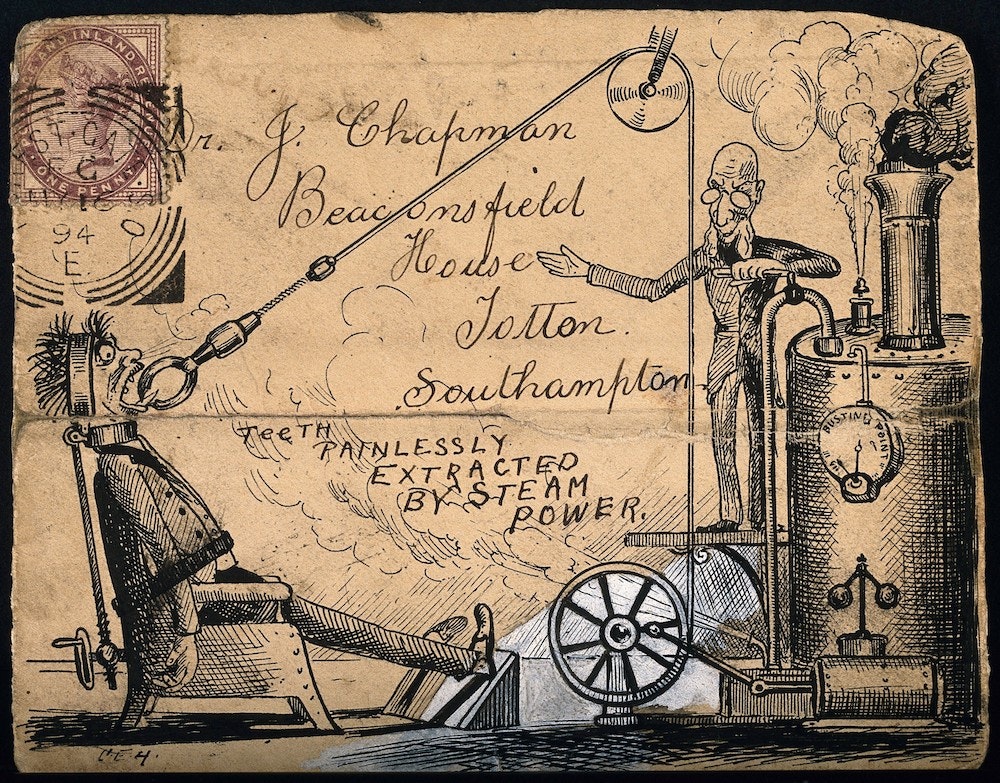 This wonderful sketch of "teeth painlessly extracted by steam power" appears on an envelope addressed to a certain Dr J. Chapman of Totton, Southampton. As to whether he is the creator of the drawing also (or indeed someone in his household), the jury is out -- though the idea that the envelope made its way through the Victorian postal system so adorned is rather a nice thought. There seem to be arguments either way. Looking closely one can see that the ink from the drawing overlays the stamp in the left hand corner, which would imply it made its way onto the envelope after postage (if the late 19th-century mailing process was anything like today's), though mysteriously also part of the address (the "D" of Dr) appears to overlay the stamp. All quite confusing. Also, are there unnatural gaps between the "m" and "a" of "Chapman", and between the "c" and "o" of "Beaconsfield", where the pulley runs, and so implying the address was written around the drawing? Also, is the drawing signed "C. E. H." to the bottom left? If so, does that imply someone other than Chapman? Someone else in his house-hold? The sender of the letter? "Chapman's Envelope Handiwork"?

If an expert on Victorian postal systems, or indeed, a handwriting expert (are the address and caption to the drawing done by the same hand?), can help out all would love to your ideas in the comments. Likewise regarding who this Dr J. Chapman was. We tried to find out a bit more about him, but alas to no avail. There's an outside chance it could be physician and publisher John Chapman (1821–1894) famous for running the influential radical journal the Westminster Review (which provided an important platform for ideas on evolution), and whose assistant, was Mary Ann Evans (AKA George Eliot). It appears this Chapman did have one loose link to Southampton, in that he wrote to the Times in 1866 to describe his use of ice packs to treat cholera patients in the city.