In his foundational textbook Elements, the Alexandrian mathematician Euclid defined a line as “breadthless length” — a thing with only one dimension. That’s what lines can do to history when used to plot events: they condense its breadth into pure motion, featuring only those people and places that serve as forces thrusting it forwards along an infinite axis. Early in the nineteenth century, Friedrich Strass proposed a different way to visualize time’s flow. A Prussian historian and schoolteacher, he published his chronological chart in 1803, a massive diagram titled Der Strom der Zeiten oder bildliche Darstellung der Weltgeschichte von den altesten Zeiten bis zum Ende des achtzehnden Jahrhunderts (The stream of the times or an illustrated presentation of world history from the most ancient times until the eighteenth century). The linear timelines that Strass resisted, like those inspired by Joseph Priestley, “implied a uniformity in the processes of history that was simply misleading”, write Anthony Grafton and Daniel Rosenberg. Strass’ stream, by contrast, allowed historical events to “ebb and flow, fork and twist, run and roll and thunder”. It would spawn several imitations as the century drew on.

In Der Strom der Zeiten, Strass depicts human history from the year of “creation” (around 4000 BCE) to the “present day” through metaphorical bodies of flowing water. Working with the hodgepodge mixture of Biblical, classical, and imperial accounts of world history, his chart begins with large, vague springs like “Chinese” and “Assyrian”, which themselves have no precursor, while Europe flows forth from the exclusive roots of Italian and Greek civilizations. It’s a partial account of the deep past, extremely ethnocentrist, and therefore more of a map of what early-nineteenth century German-speaking people happened to think about history than anything else. As Holger Berg puts it, the historiographical context was “decidedly German or, to be more accurate, Hanoverian”. 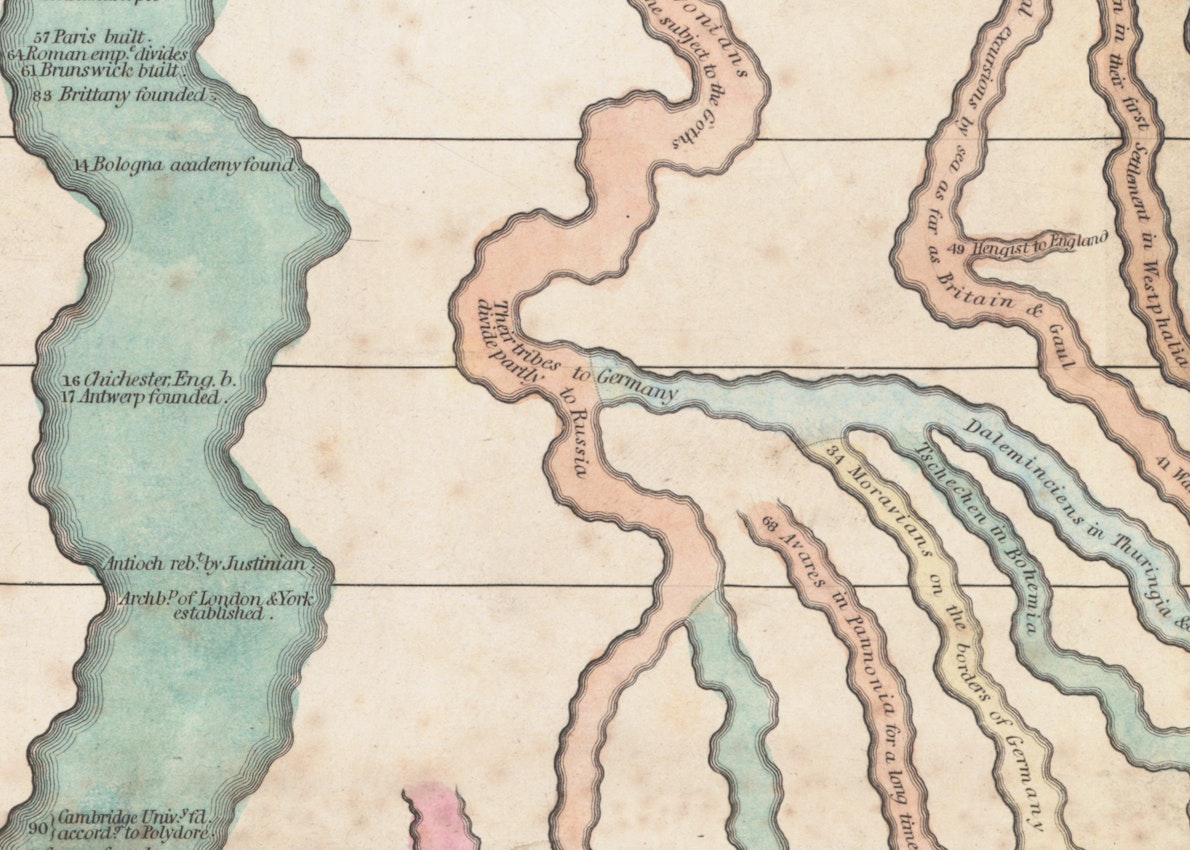 Strass was working in a tradition of general history, also known as allgemeine Geschichte or historia universalis, which sought knowledge on a global scale. This ambitious universalism was true of most disciplines founded in the eighteenth century at the great English, French, and German institutions. Ideas about knowledge forged in this era are still the air we breathe. It is difficult to step outside of an idea like “science”, for example, to see what is constructed about a word like “scientific”. But, in Germany in particular, general history after 1760 aimed its efforts toward a “systematic” account of the past.

When the English writer William Bell published his translation and expansion upon Strass’ ideas in 1810, he was astonished that “the image of a Stream should not have presented itself to anyone” previously working on historical diagrams. It had an inherent liveliness, in his opinion, which matched with our experience of time itself. “The expressions of gliding, and rolling on; or of the rapid current, applied to time, are equally familiar to us with those of long and short”, wrote Bell, referring to simpler, line-based charts. Moreover, water springs up, surges, and dwindles, making it an apt metaphor for the “rise and fall of empire”. Strass’ rivers may allow the past to snake and curl, but they are relentlessly focused on the progression of power, according to Bell. A people’s history this is not:

[Strass’ chart’s] diversified power, likewise, of separating the various currents into subordinate branches, or of uniting them into one vast ocean of power; of dispersing them a second time, but still in such a manner that they are always ready under the guidance of some great conqueror to converge again into one point, tends to render the idea by its beauty more attractive, by its simplicity more perspicuous, and by its resemblance more consistent.

Although Bell thought such diagrams livelier and more beautiful than a simple timeline, the accompanying images are peculiar-looking. The less saturated versions of the chart appear almost tuberous, the rivers bulging in the rhizomatic style of a root vegetable, like ginger. Édouard Hocquart produced a rather more stylish version of a similar view in his 1830 Panorama de l'Histoire Universelle. The typography is elegant, and the diagram plots a tasteful combination of pink, yellow, and various shades of green against slate. More garish, and even more striking, is an 1849 version of Strass’ diagram hand-colored in jewel tones by English publisher C. Smith & Son. 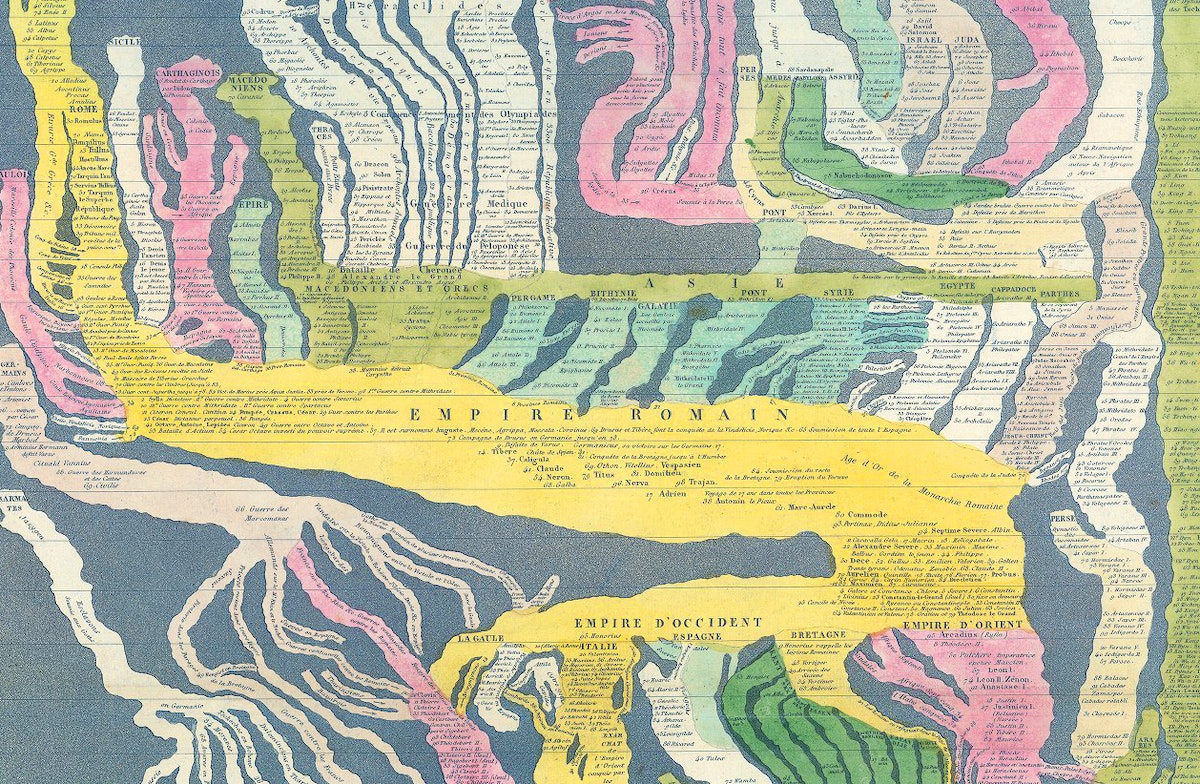 Strass’ own writing shows how attempts to create universal systems can lead to idealization. In the introduction to his Handbuch der Weltgeschichte (1830), he romanticizes people from the past into a kind of homogenous spirit of history, a man whose being transforms alongside the technologies he lives amongst. Like his Strom der Zeiten charts, which charm the eye with their peculiarity, Strass’ portrait of an aristocratic Europe, whose chivalric values were withering, now seems more picturesque than analytical. His systematic analysis is rendered defunct, even bizarre, by the changing standards of information graphics and ongoing changes to the definition of the word “history”. If “streams of time” initially promised to widen the breadth of linear history — allowing it to meander across space as well as time — our modern-day eyes are perhaps drawn to the banks and blank spaces in these maps: the stories covered by the waters of their “universal” system.