Although commonplace today, the landscape as a distinct category in painting only really began to establish itself in Western art during the Renaissance, a period in which natural views began to make their way to the fore of focus, no longer merely backgrounds to human figures. Perhaps an interesting quirk of this "transition" were the images which seemed to fuse the two: anthropomorphic landscapes. These images — particularly where landscapes are given the form of human heads — appear to be somewhat of a meme of the 17th century, with examples cropping up again and again, especially in Netherlandish painting. Below we've compiled a collection of such images available online (sadly not all of them openly licensed), with a big debt owed to a great post on JS Blog which provided a wonderful springboard for our findings. 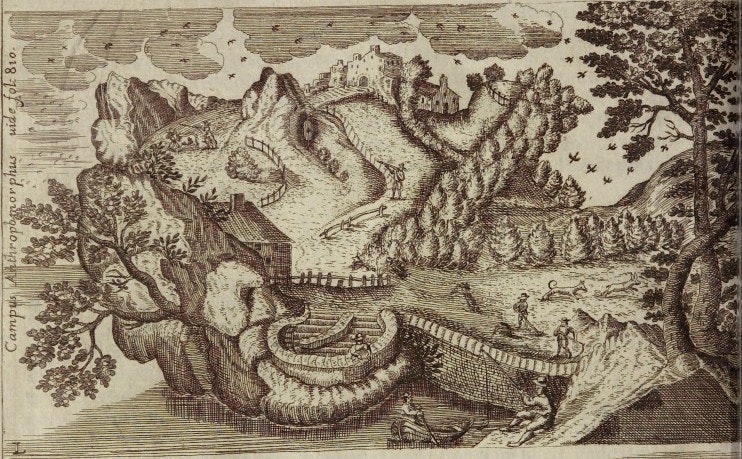 One of the most popular versions of the anthropomorphic landscape is the depiction of a bearded man, horizontal in rocky profile. The beginnings of this can be traced back to an image created by the great 17th-century polymath Athanasius Kircher, featured in his Ars magna lucis et umbrae (1645/6). Kircher's design is said to have been inspired by a story related by Vitruvius about the 4th-century-BC architect Dinocrates' plan to sculpt into Mount Athos a colossal image of Alexander the Great, who would hold a small city in one hand and with the other pour a river into a sea by means of a gigantic pitcher. Kircher's more modest rendering — involving only a face rather than full body — was to be copied and riffed-upon many times over the next decades, including by Wenceslas Hollar, who in his rendition trims the "beard" and "hair" for a general smarter appearance. 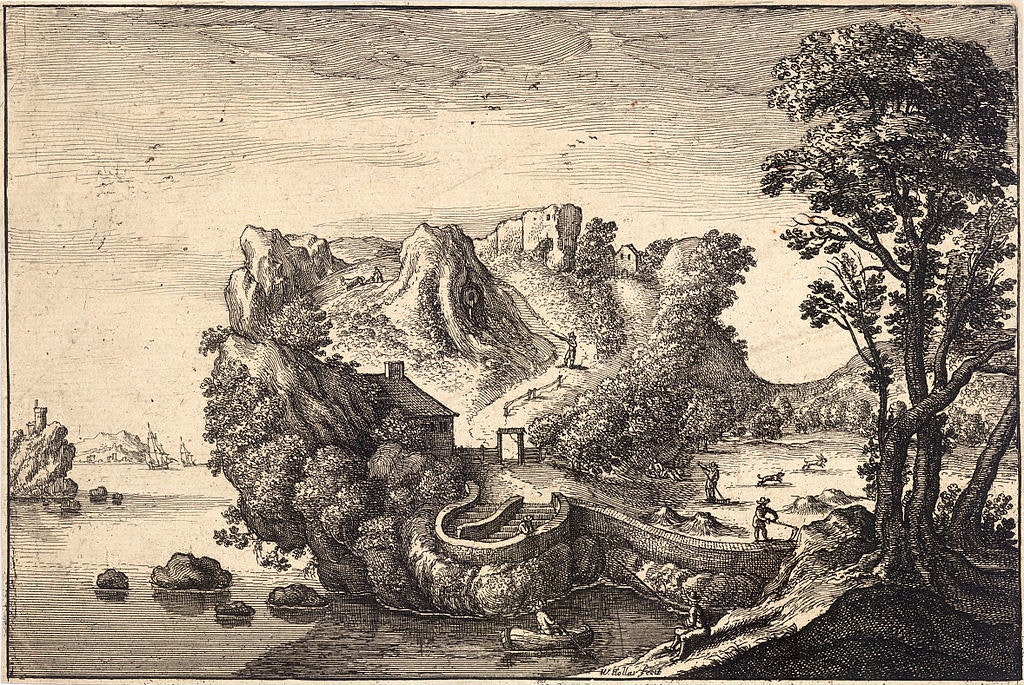 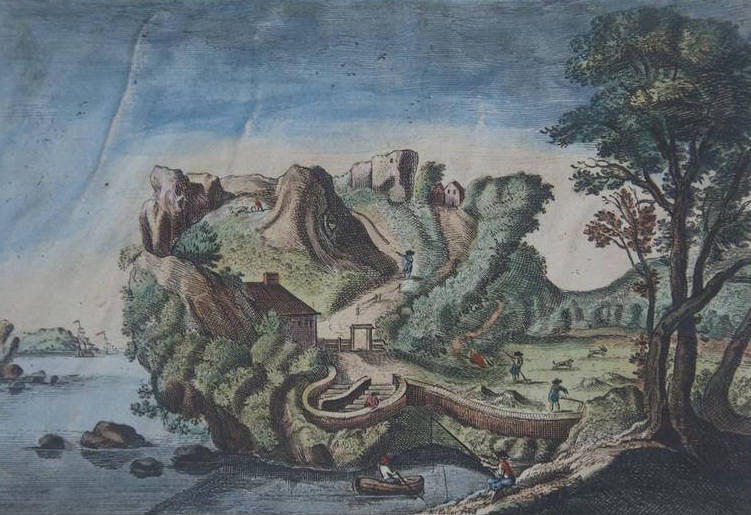 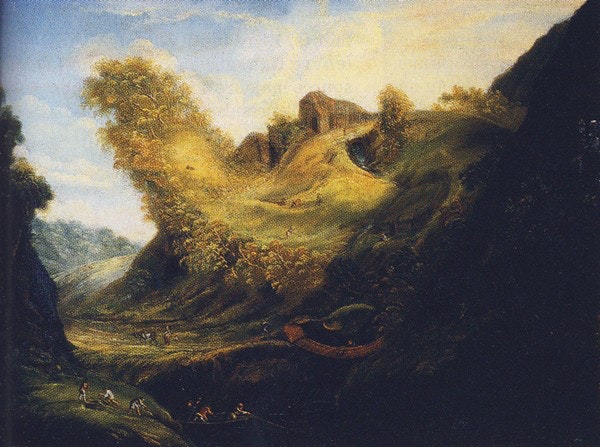 A painting attributed to Matthäus Merian the Elder (1593-1650), a Swiss artist who spent most of his career in Frankfurt - Source.

Not a lot is known about these two, both of which derive heavily from Kircher's layout. The images are from a Christie's catalogue from 2004, the only information given being that they are "Flemish School, 17th Century" — Source.

With the following two images we depart a little from the profile aspect of Kircher's design. The engravings are by the German artist Johann Martin Will (1727-1806) who made many such images. The "Asia" one is part of a larger series in which each continent is represented as a face embedded into a landscape (see a very lo-res version of the Europa one here). Like Joos de Momper (coming up), Will also created a similar series for each of the seasons (see here). 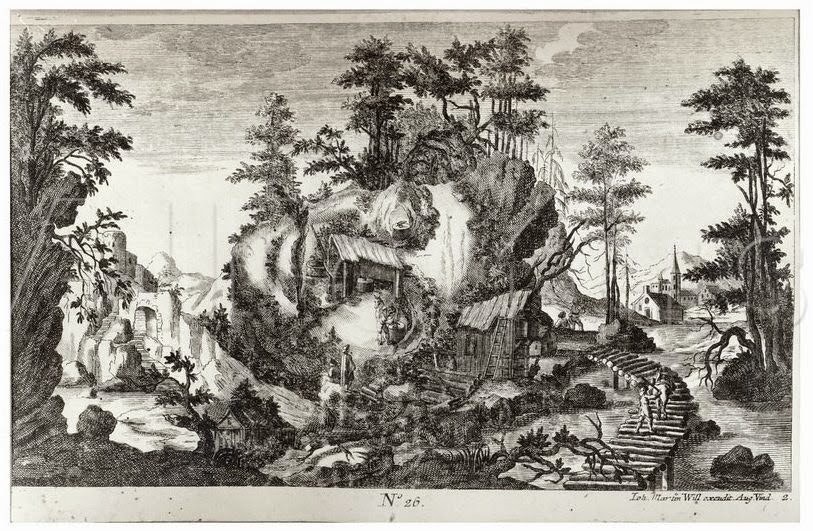 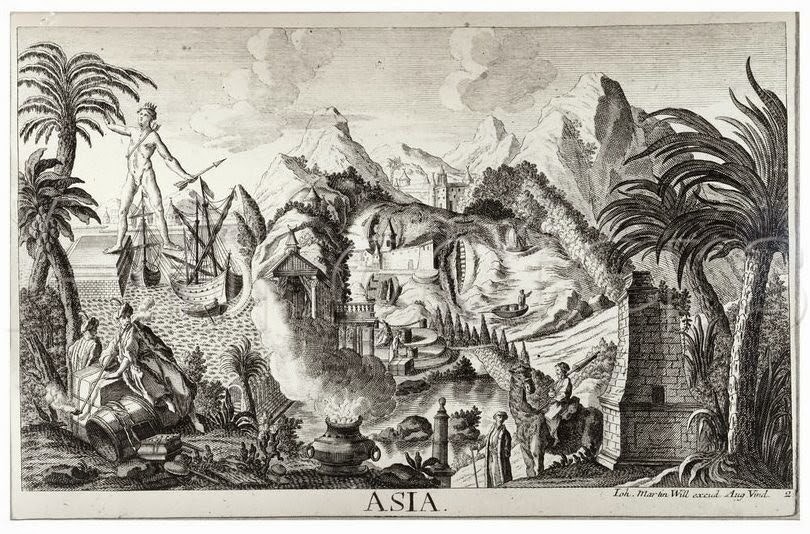 "Asia", an anthropomorphic landscape by Johann Martin Will — Source.

There follow a few more examples of this horizontal face in the rock motif, including another by Johann Martin Will. The Herri met de Bles painting, which dates from around 1550, is the earliest example we can find of hiding a face in a landscape, predating Kircher's image by a whole century. The face is subtle, but it definitely there. 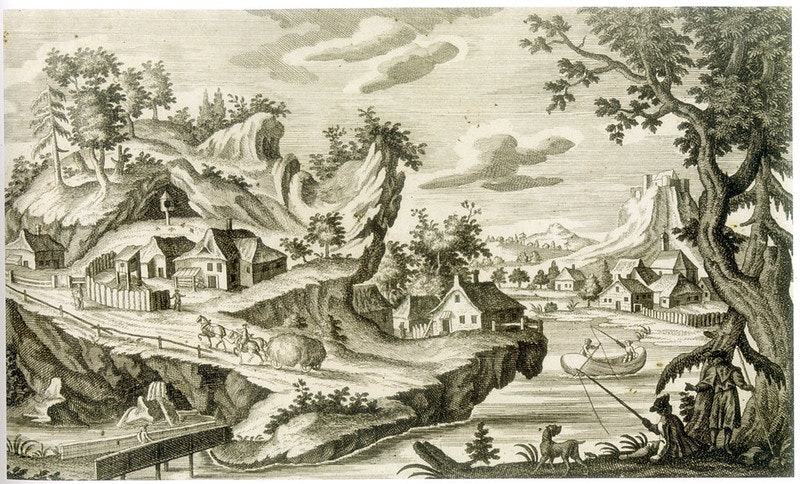 An anthropomorphic landscape from Johann Martin Will, dated to 1780 — Source. 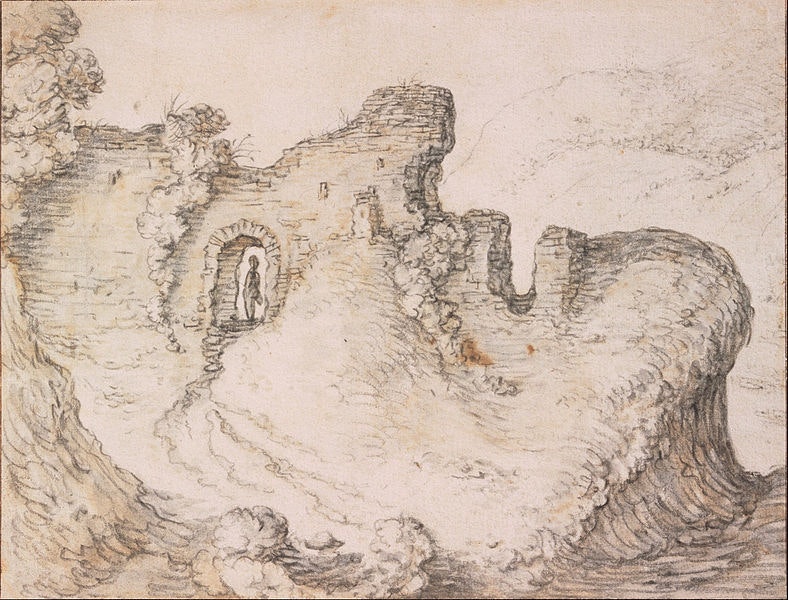 Rocky landscape with ruins, forming the profile of a man's face, by Dutch artist Herman Saftleven the Younger, circa 1650 — Source. 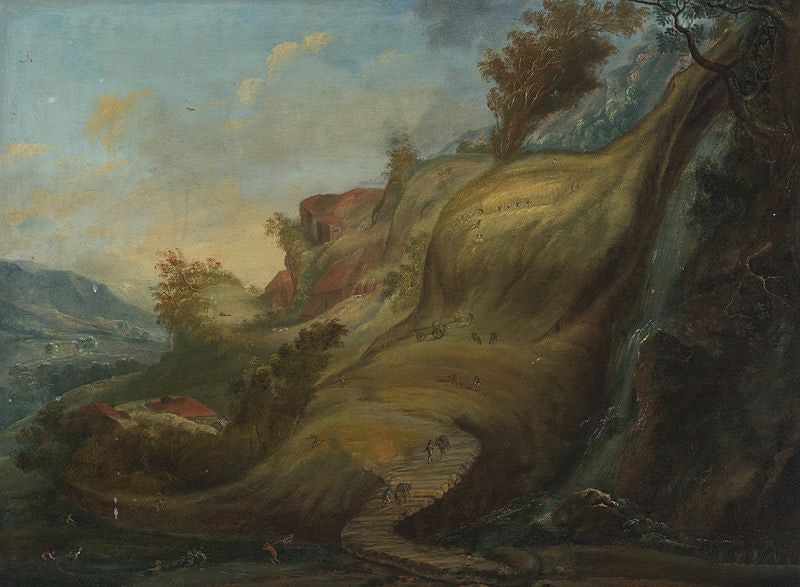 The artist behind this is not known though it could possibly be the work of Matthäus Merian the Elder. In addition to the man's face, there also appears to be another hidden element, the form of some dead game: hind leg and rump to the left of the upper part of the waterfall, the bridge a foreleg, and river and trees forming an elongated neck — Source. 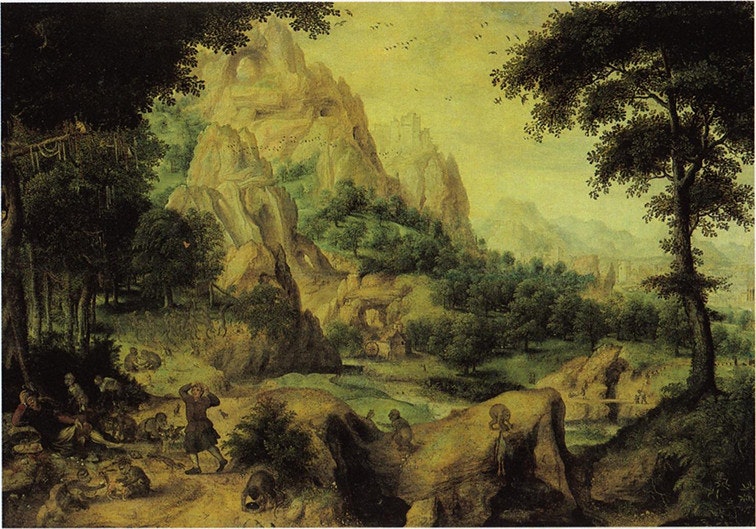 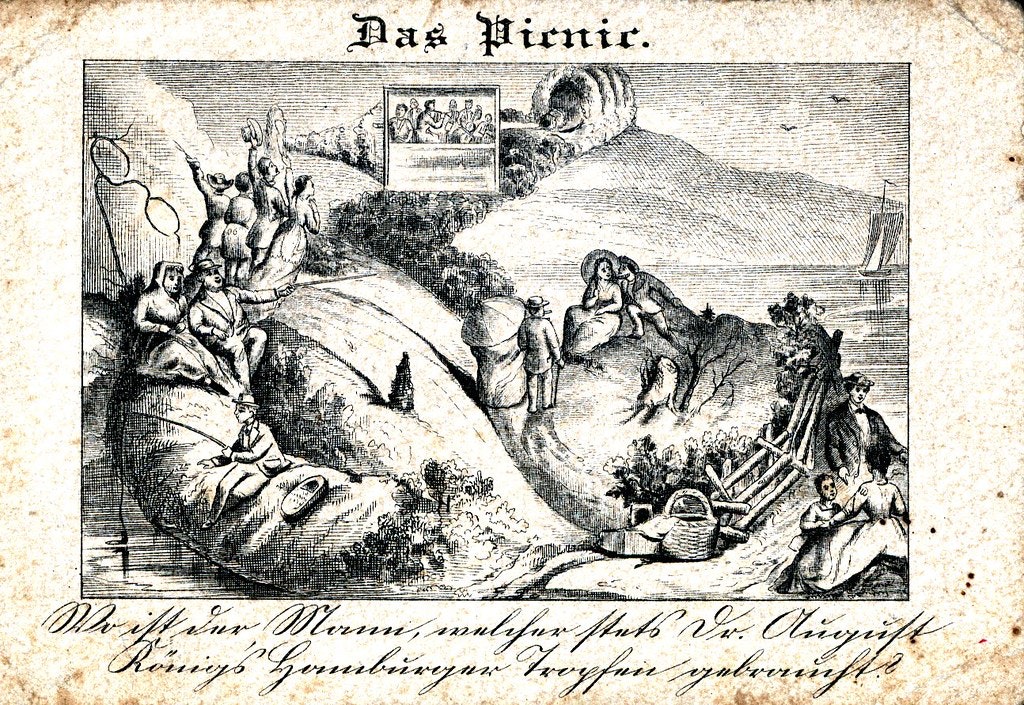 The following three images, in which the "hidden face" is now upright, are from Joos de Momper's series anthropomorphising the four seasons (we can only find a fairly low-res one for Spring, see here). There is no exact date for these but they are thought to be from the early 17th century (Momper died in 1635), so would have predated Kircher's "bearded man" by a good decade at the very least. 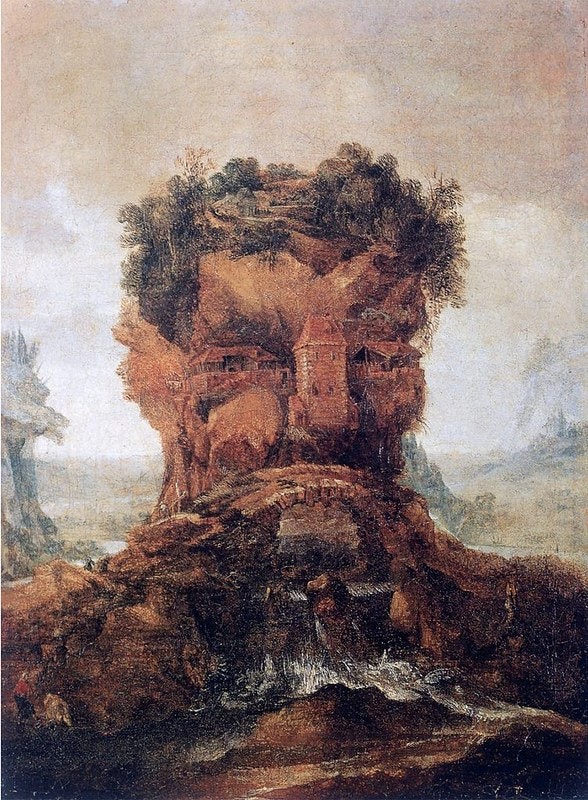 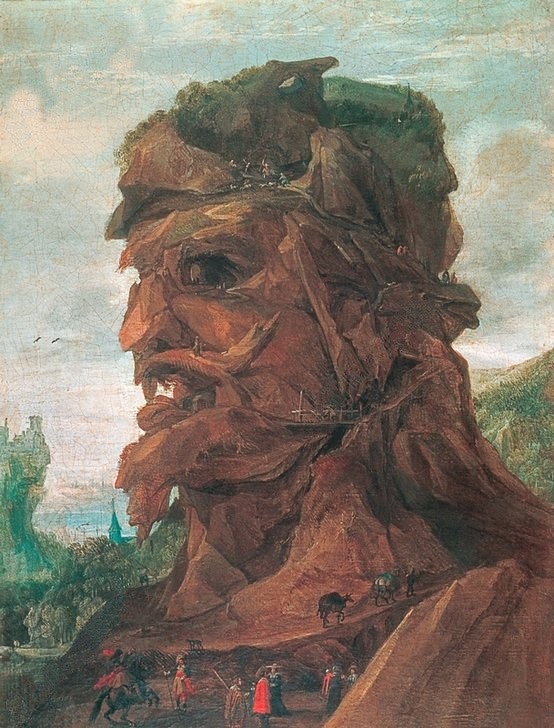 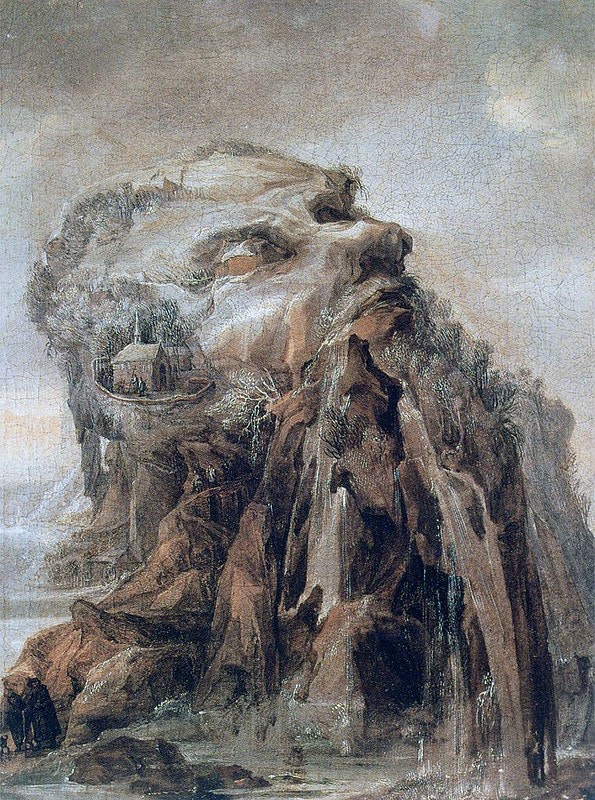 The next two continue with the hidden head in an upright position, both using the anthropomorphic element to emphasise a certain "humanness": the first in illustration of our five senses; the second, which is an allegory of iconoclasm, in the idea perhaps of putting the human form before God. 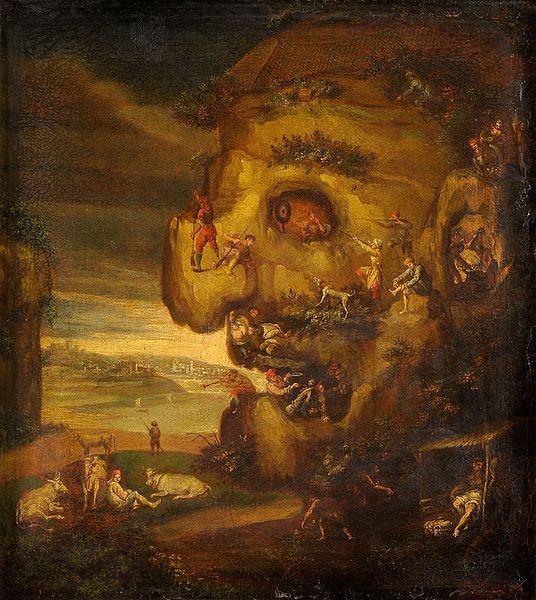 The five senses, painter unknown, though thought to be Italian and from the 18th century — Source.

The next picture is an illustration by Henry Holiday for Lewis Carroll's The Hunting of the Snark. The face hidden in the darkness of the trees is thought by some to be based on Geheert's iconoclasm image above. 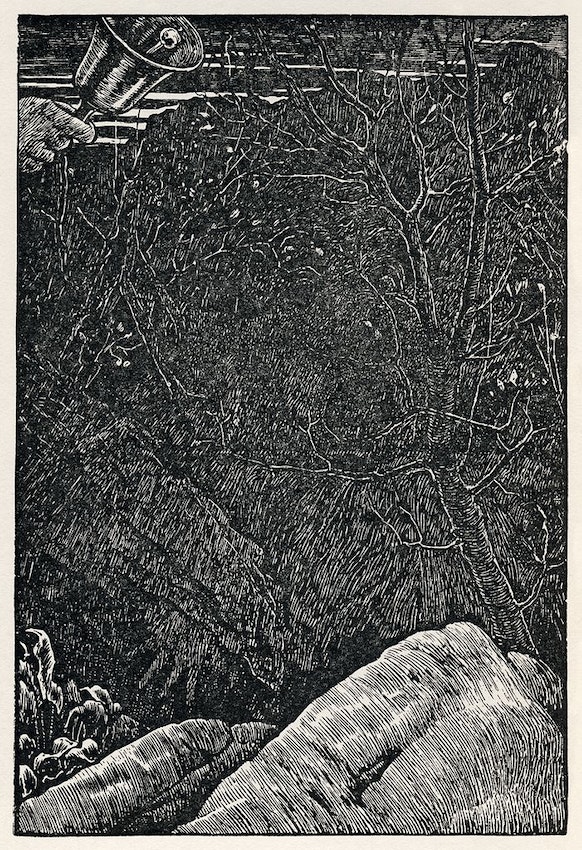 The last of Henry Holiday's original illustrations to Lewis Carroll's The Hunting of the Snark, 1876 — Source.

As well as landscapes, faces were often composed of buildings and combinations of other structures and figures. The next image shows a sketch — "An Allegory of Death" — attributed to that great master of the composite portrait Giuseppe Arcimboldo (1526/7–1593). Following this is an image, very likely to be a direct adaptation of Arcimboldo's, found in Veridicus Christianus (1601), the very first Jesuit emblem book. The final image shows a popular motif, in the aforementioned German Vexierbild tradition, in which elements so full of life combine to create a memento mori image of a skull. 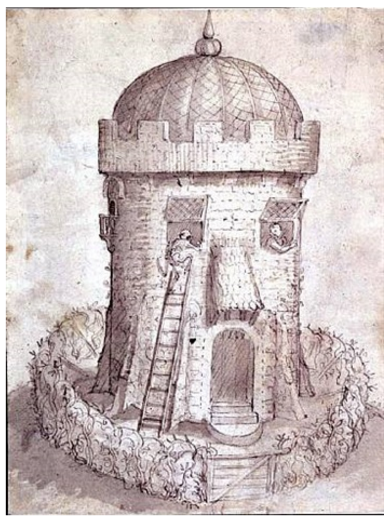 Sketch thought to be by Giuseppe Arcimboldo — Source. 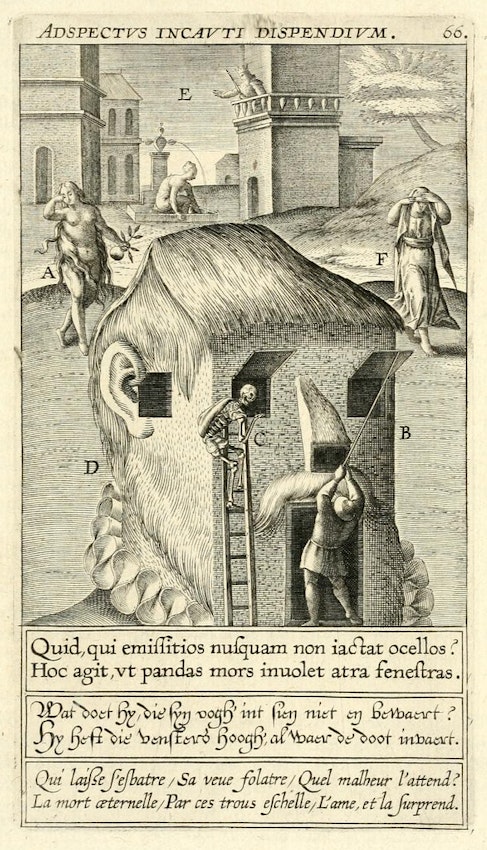 "The Incautious Gaze", an image from Veridicus Christianus (1601) — Source. 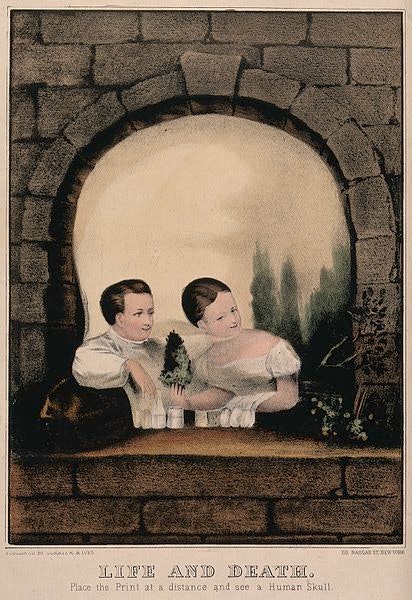 Currier and Ives print showing a young man and a young woman looking through an opening in a wall; alternatively, a human skull — Source.