The Death and Burial of Cock Robin

The “Death of Cock Robin”, also known as “The Death and Burial of Cock Robin” is a somewhat macabre English nursery rhyme describing the murder and the funeral of a robin. When Cock Robin is shot dead by a sparrow, the birds organise his funeral: depending on the version, the Owl will dig his grave, the Rook will read the service, the Kite will carry him to the grave, and the Dove will be the chief mourner.

The origins of the tale are uncertain, but a stained window depicting a robin killed by an arrow could already be found in the fifteenth century at Buckland Rectory (Gloucestershire). The earliest known English record of the rhyme, according to the Oxford Dictionary of Nursery Rhymes, dates back to 1744 when it appeared in Tommy Thumb's Pretty Song Book. The proximity of this date to the political decline of Robert Walpole has led some to suggest that the tale may be describing Walpole’s fall from power, or that an ancient nursery rhyme might have been “resurrected” for the occasion.

The popular tale has generated a variety of parodies and spinoffs: Byron recalled the verses in “Who killed John Keats?”, written on the occasion of Keats’ death, while “The Trial and Execution of the Sparrow for Killing Cock Robin” described the aftermath of Cock Robin’s funeral. In this version, the Sparrow is brought to court and interrogated. The accounts of the witnesses get increasingly complex: was Sparrow really the murderer? Or was it a cat? In the end Judge Hawke, deciding the sparrow to still be guilty, takes the metering out of punishment into his own hands, or, perhaps more accurately, beak:

So he eat up the Sparrow
The rest got away,
They thought it not safe
Near such Justice to stay.

In 1861, taxidermist Walter Potter staged the Death of Cock Robin with 98 different species of embalmed birds. The tableau accurately recreated each stanza of the rhyme. In the tableau, like in other illustrated versions, a bull can be seen pulling the bells for the service. It is very likely that the bull was originally supposed to be a “bullfinch”, and therefore a bird like the rest of the mourners. 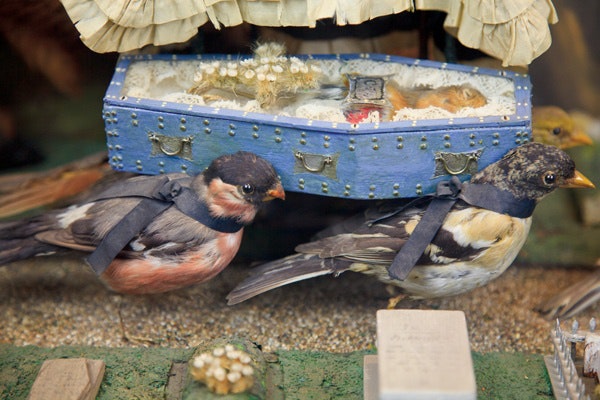 Below we show some of our favourites from the many many editions produced over the centuries. Also definitely worth checking out the wonderful illustrations from the 1865 version by H. L. Stephens, featured over at the 50 Watts blog.