The Heart of Man; Either a Temple of God, or a Habitation of Satan; Represented in Ten Emblematical Figures (1851) 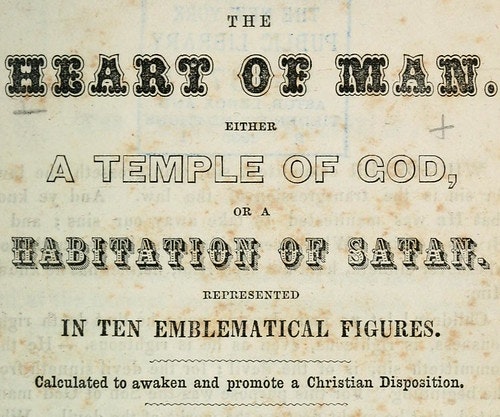 The following illustrations — which, in a wonderful marriage of word and image, plot out the life of the Christian soul — form the central strain in The Heart of Man: Either a Temple of God, or a Habitation of Satan: Represented in Ten Emblematical Figures, Calculated to Awaken and Promote a Christian Disposition (1851), an English edition of a German book published in 1812 in Berlin by the "divine" and philanthropist Johannes Gossner (1773-1858). Gossner's work was itself actually a repurposing of an older text, a Catholic emblem book first published in French and which Gossner claims came to him by way of a German version published in Wurzburg in 1732. Although in his introductory note to the reader, Gossner gives the title of this book as Geistlicher Sittenspiegel (Spiritual Mirror of Morality), Peter Daly in his The Emblem in Early Modern Europe (2014), believes the title to actually be Geistlicher Seelen-Spiegel, and the publication date to be 1733. As for the wonderful images, Daly believes them to be based either on an earlier series of twelve illustrations "probably dating from the 1680s, or on the equally popular book in France about 1730 with the title Miroir de l'Ame or Miroir Pecheur with engravings by P. Gallays". For some reason Gossner left out two images from this earlier series of twelve, "the last image showing the pious in paradise, as well as plate 5 with Christ sitting in the middle of the heart". David Morgan, in his The Forge of a Vision (2015), traces the influence of this particular genre of heart imagery back further to the Flemish illustrator Antoine Wierix's Cor Jesu amanti sacrum, published in 1595.