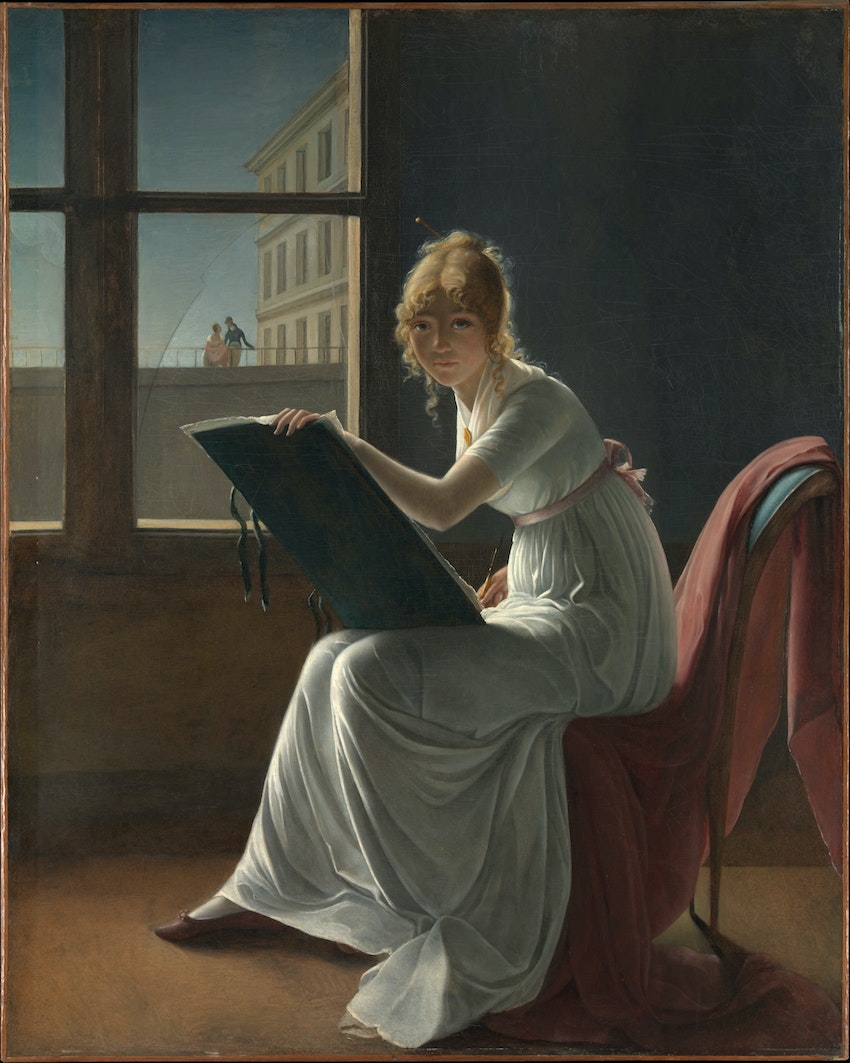 Our attention is initially drawn to the light, which clings to the contours of a woman thought to be Marie Joséphine Charlotte du Val d’Ognes, fuzzing the borders of flesh, fichu, and the muslin of her neoclassical dress. In the midst of creation, the artist meets our gaze: are we the model or a mere distraction? Yet her dark irises seem to blend into the matte wall. Instead of holding eye contact, our concentration strays to a frame within the frame — the scene encased by a broken windowpane. In the foreground, the artist’s fingers fold her material over a drawing portfolio, adding a sense of depth to a two-dimensional surface, while the cracked glass opens this studio to the evening air. For art historian Amelia Rauser, du Val d’Ognes becomes “animated by her own sensibility, a living statue pulsing with vitalist energy”. And indeed, juxtaposed with the couple at the painting’s vanishing point — heads canted in amorous engagement — it seems as if the artist’s solo absorption illuminates this artwork, her unseen canvas a spotlight bringing the world into focus.

First attributed to Jacques-Louis David and then Constance Marie Charpentier, this portrait is now believed to be the work of Marie-Denise Villers (1774–1821), who may have exhibited the painting at the Parisian Salon of 1801. As Estella Lauter shows, the shifting ascription inadvertently exposes the gendered reception of art: what was once described as a merciless portrait by David of “an intelligent, homely woman” quickly became imbued with fault and “feminine” technique. Metropolitan Museum of Art curator Charles Sterling’s 1951 commentary on the painting illustrates how conjectured gender can overcolor the beholder’s eye: the idea that this “may have been painted by a woman is, let us confess, an attractive idea”, he writes. “Its poetry, literary rather than plastic, its very evident charms, and its cleverly concealed weaknesses. . . all seem to reveal the feminine spirit”. Yet, through its trompe l’œil effect — whereby the cracked glazing illustrates how glass alters the sky — it is as if the artist (Villers or otherwise) anticipated the somewhat facile nature of scholarly interpretation. We can look as long as we like, but we will never see the drawing that occupies du Val d’Ognes’ attention. Like broken windowpanes, all interpretations of artworks remain fractured views onto the world.

We know less than we would like about Charlotte du Val d'Ognes and Marie-Denise Villers — the latter can only be firmly credited as the artist of one other painting: A Study of a Woman after Nature (1802). Thanks to Anne Higonnet’s masterful sleuthing, we can posit that this portrait is set in the Louvre, where Jean-Baptiste Regnault and Sophie Meyer created an atelier for women artists, which Villers may have attended. Charlotte du Val d'Ognes also aspired to a career in the arts, and, according to Bridget Quinn, gave up painting after marriage for the demands of family life. Perhaps the couple in the portrait’s distance, then, represent looming social expectations in a revolutionary era, when debates about equal rights for women gripped 1790s France. “The device of the window scenes allows us to see public and private selves simultaneously”, writes Higonnet, “the woman who trains professionally, and the woman attached to male partner and home”. And the broken glass might gesture toward a shifting social order, a time when it could finally become possible to be at once a “professional woman” and “traditionally feminine”.