Visualizing Migraines: The Attempts of Hubert Airy and Others to Depict Scintillating Scotomata 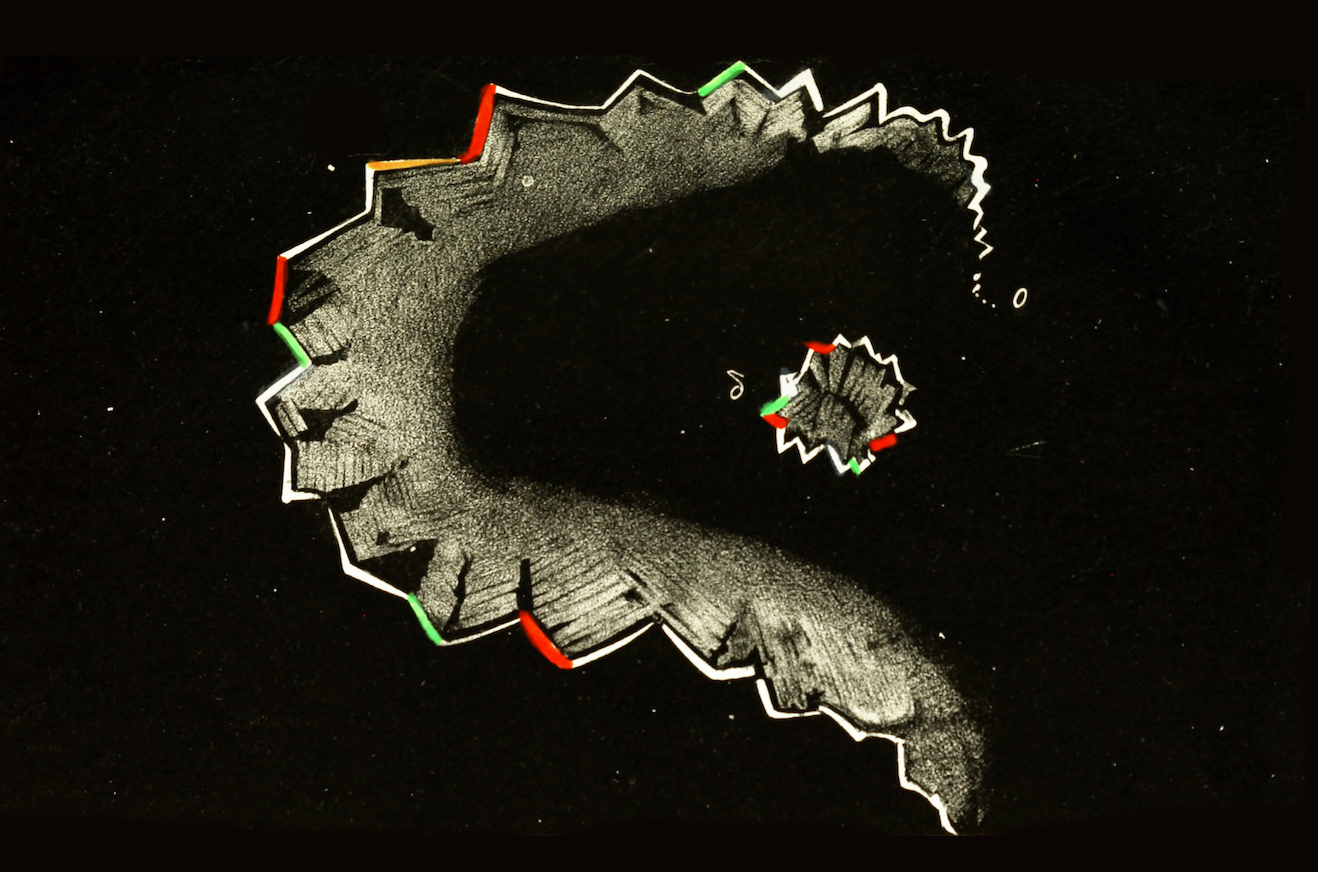 Hubert Airy's 1870 visualization of the scintillating scotoma of his migraine, reproduced in P. W. Latham's On Nervous or Sick-Headache (1873) — Source"

“Migraine affects a substantial minority of the population, occurs in all civilisations, and has been recognized since the dawn of recorded history”, wrote neurologist Oliver Sacks in a 1970 study that arose in response to the common medical sentiment that “little is known about migraine and even less to be done about it”.

While a migraine shares some symptoms with the common headache, frequently-experienced visual distortions set it apart from the effects of tension, stress, or dehydration. And yet, despite the prevalence of this phenomenon, its medical observation is relatively recent. As Katherine Foxhall chronicles in Migraine: A History, John Fothergill’s description of a headache he suffered in the winter of 1778 is thought to be the first anglophone account of a migraine’s ocular disturbances. He saw “a singular kind of glimmering in the sight; objects change their apparent position surrounded by luminous angles, like those of a fortification. Giddiness comes on, headache, and sickness”. Fothergill was detailing, with the architectural language of fortification, what has been subsequently named scintillating scotomata: serrated hallucinations in the shape of the letter “C”, which resemble the angular walls of a bastion.

Discontent with suffering alone, the physician Hubert Airy set out to draw and share his migraine experiences in 1870. He corresponded frequently with the astronomer John Herschel, who, like Fothergill, found himself overcome, during an otherwise uneventful breakfast, by a debilitating “pattern in straight-lined angular forms, very much in general aspect like the drawing of a fortification, with salient and re-entering angles, bastions and ravelins, with some suspicion of faint lines of colour between the dark lines”. A keen-eyed observer of the outer world, who first coined the term "photography", Herschel's neurological condition forced him to turn this focus inward.

While Herschel was convinced that his visions signalled the onset of blindness, Airy believed the patterns he saw during migraine attacks — which his father, George Airy, also prone to scotomata, described as “Norman arches” — revealed something important about the brain. In 1870, Hubert Airy delivered a paper to the Royal Society in Cambridge, which was subsequently published under title “On a distinct form of Transient Hemiopsia”. During an otherwise scientific exposition, Airy inserts a journal entry from 1854, detailing his first migraine attack while still a student. Here we find a description uncannily reminiscent of both Fothergill and Herschel:

When it was in its height it seemed like a fortified town with bastions all round it, these bastions being coloured most gorgeously. . . All the interior of the fortification, so to speak, was boiling and rolling about in a most wonderful manner as if it was some thick liquid all alive.

Accompanying the paper, Airy included several plates visualizing the progression of scintillating scotoma. “So why did Airy think that indulging in a recital of his personal experiences was worthy of presentation to the Royal Society?” asks Katherine Foxhall. The answer reveals how technological progress provided medical research with a new set of metaphors. “Because, he concluded, this teichopsia [scintillating scotoma] was more than ‘merely’ a disease. It could be regarded as ‘a veritable “Photograph” of a morbid process going on in the brain.’”

Few things remain as unrelenting across history as the pain in our heads. Mervyn J. Eadie tells the story of what some believe to be the earliest surviving description of a headache, recorded by an ancient Babylonian cuneiformist and translated by Reginald Campbell Thompson. Here too, perhaps, we find the “flashing” or scintillating phenomena of a migraine: “Headache roameth in the desert, blowing like the wind / Flashing like lightning, it is loosed above and below”. Thompson also revealed a potential alleviant in his The Devils and Evil Spirits of Babylonia (1903), discovered long before the days of ibuprofen and paracetamol:

Take the hair of a virgin kid,Let a wise woman spin (it) on the right side . . . And bind the head of the sick man . . . That the Headache may ascend to heavenLike the smoke of a peaceful homestead

In medieval Europe, a similar link persisted between head pain and the heavens, whereby the migraine aura was possibly understood as a divine revelation: the scotoma’s angles taken for angels. When Charles Singer (1876-1960), the British Society for the History of Science’s first president, viewed the medieval manuscript known as Scivias (completed in 1151) — where the mystic Hildegard of Bingen’s visions are illuminated in vibrant, crenulated patterns — he “recognized at once that the figures . . . resembled descriptions by patients of what they had seen during attacks of migraine”.

You can browse Airy’s images and a fortification-like illumination depicting Hildegard of Bingen’s visions from the Wiesbaden Codex below, as well as additional visualizations by neurologists William Gowers and Joseph Babinski.

A plate depicting the progression of Hubert Airy's scintillating scotomata, from his 1870 article published in Philosophical Transactions of the Royal Society, “On a distinct form of Transient Hemiopsia” — Source

The first part of Hubert Airy's image of his scintillating scotomata, showing its early progression, reproduced in P. W. Latham's On Nervous or Sick-Headache (1873) — Source

The climax of Hubert Airy's image of his scintillating scotomata, reproduced in P. W. Latham's On Nervous or Sick-Headache (1873) — Source

The progression of Hubert Airy's fortification spectra, from Smith Ely Jelliffe and William A. White's Diseases of the Nervous System (1919) — Source

A plate from P. W. Latham's On Nervous or Sick-Headache (1873) depicting a “derangement of sight” — Source

“The Development of Scotomata in Migraine While Reading”, from Smith Ely Jelliffe and William A. White's Diseases of the Nervous System (1919) — Source

“The Heavenly City”, one of Hildegard of Bingen's fortification-like visions — Source

An “expanding spectrum” seen against a dark background and also half against a light window, from W. R. Gowers' Subjective Sensations of Sight and Sound (1904) — Source

An illustration from W. R. Gowers' Subjective Sensations of Sight and Sound (1904), depicting how a scotoma infers with the field of vision while reading — Source

A “progressive spectrum” as described by the patient Mr. Beck, from W. R. Gowers' Subjective Sensations of Sight and Sound (1904) — Source

A portrait of Gowers' patient Mr. Beck, with a migraine's “arched spectrum (with the colours of the rainbow)” above his head, from W. R. Gowers' Subjective Sensations of Sight and Sound (1904) — Source