Long before the current craze for adult colouring books came this 19th-century "painting book" from one of the finest contributors to the Golden Age of illustration: Walter Crane (1845 -1915). Although remembered chiefly as an influential children’s book illustrator, Crane resisted this reputation throughout his life. A member of the Arts and Crafts movement, he also designed textiles, stained glass, wallpaper and ceramics, alongside several large allegorical paintings. Although his work was exhibited at the Royal Academy in 1862, many other paintings he submitted were poorly received or never displayed, possibly because of his socialist leanings. He gave up sending his paintings to the Academy in 1877. Instead, he turned his attention to children’s books, although was never quite able resist his higher artistic calling — as his designs and book illustrations attest.

Teasingly referred to as the "academician of the nursery", Crane began illustrating fairy tales with the same attention to detail as the paintings he had formally sent to the Academy. His efforts changed public attitudes towards children’s books, which had previously been simple, inexpensive paperbacks before Crane turned his attention to them. His illustrations incorporated carefully rendered textiles, clothing, furniture designs, and patterns inspired by Japanese art and printmaking. Crane himself acknowledged that he used these picture books as a vehicle for his other ideas about furniture and decoration.

Crane achieved further commercial success through adapting his illustrations in a painting book. Originally published in 1880, the outline illustrations were accompanied by a full colour rendering on the opposite page. Although he had to sacrifice some of the intricacies of his original illustrations, the painting books Crane produced still offered a challenge to the budding young artist, with his own colour plates acting as a guide. (See a coloured in copy here.) The elaborate and complex designs Crane created are strikingly similar to the colouring books that are designed for adults today.

Although Crane achieved fame and recognition as a children’s illustrator, he continued to devote himself to his other artistic interests throughout his life. A photograph of his studio from 1885 (see below) depicts watercolours, oil paintings, sculpture and other design work, revealing a polymath who poured his varying talents into illustrations, which had a transformative effect on the art in children’s books. 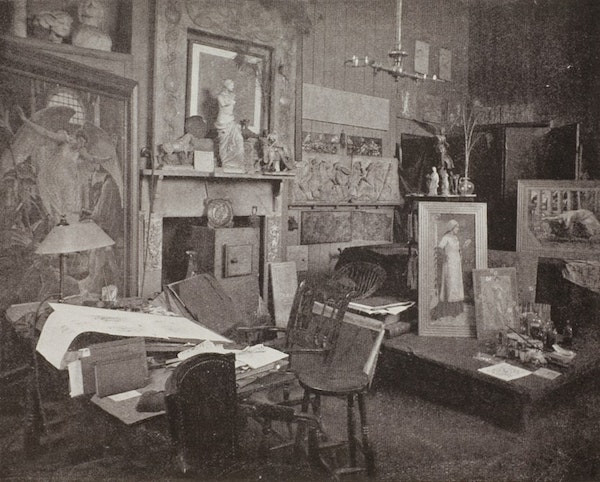