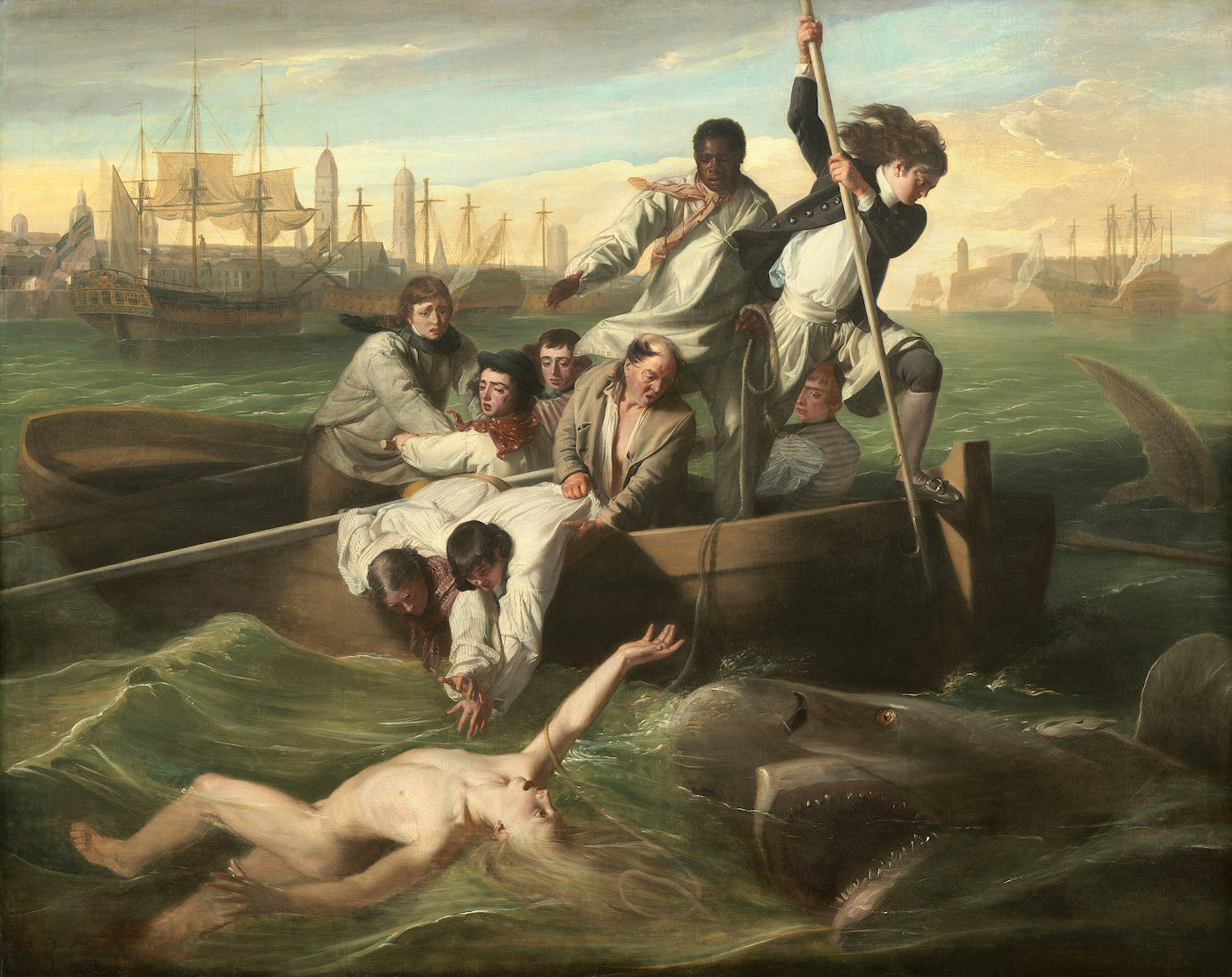 It’s too late to save the leg, which has been bitten off below the knee. But Brook Watson, the floating blonde youth depicted in Copley’s oil painting, will be rescued from the jaws of this tiger shark and go on to enjoy a long life as a London merchant, becoming Lord Mayor in 1796 and a baronet in 1803. His rise bred envy: “in spite of his later elevation”, wrote one of Copley’s detractors, “there are those whose sympathy is with the shark”.

Though based on true events, we view this work from the distant vantage of its artist’s imagination: Copley had never visited Cuba, the backdrop of his fearful tableau. Born in Boston in 1738, he enjoyed a successful career as a portraitist — with sitters including the likes of Paul Revere and Samuel Adams — gaining international fame for a study of his half-brother Henry Pelham, A Boy with a Flying Squirrel. Although Copley’s sitters and social circle included people from both sides of the political divide, as tensions mounted in the years leading up to the Declaration of Independence, the artist found himself liable through marriage. His father-in law, Richard Clarke, was one of the Tory merchants whose product had been destroyed during the Boston Tea Party. When a group of independence-seeking Whigs threatened Copley, he set off abroad.

With this change of scenery came a change in style, as Copley, influenced by a Grand Tour of the continent, began to depict not just individuals but dramatic and historic landscapes. In Watson and the Shark, he reanimates an adventure that occurred in the waters around Havana, when the artist was just eleven years old. As the cabin boy Watson went for a swim, he was ambushed by sharks. The crew members fended off a third assault and dragged the boy (now missing his right leg) back aboard.

Although it was a somewhat recent development in historical painting to portray contemporary events rather than biblical, classical, or military scenes, Watson and the Shark in many ways belongs to a longer aesthetic lineage. Several scholars have traced the debts that Copley owes to previous artworks, in terms of composition, anatomy, and metaphorical import. Watson has a similar body and posture (though rotated and semi-submerged) to the Borghese Gladiator (from the third century BCE), while his profile repeats that of Laocoön from the same era (Monique Webber discusses this statue in a PDR essay from 2016). Ellen G. Miles suggests the influence of earlier works such as Raphael’s George and the Dragon on Copley’s triangular composition and notices the influence that Charles Le Brun’s investigations into facial expression exert on the sailors’ painted visages. 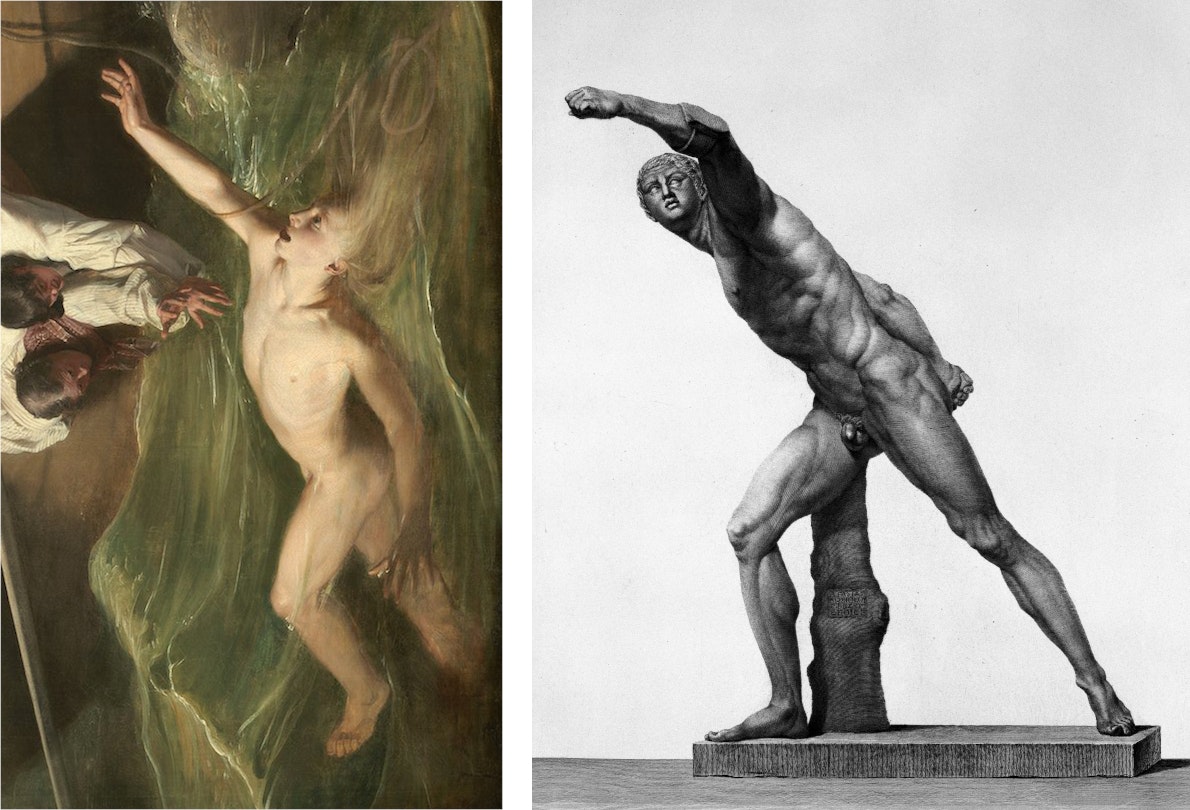 Left: Rotated detail from Watson and the Shark; Right: Mid-18th-century etching by Giovanni Piranesi of the "Borghese Gladiator" sculpture — Source.

One of the more prominent figures is the Black sailor who watches over the violent scene. Copley’s first sketches of the composition included a different, white figure, but for the final painting, he included this man, who appeared elsewhere in a standalone portrait by Copley, but whose identity remains unknown. The historian Louis P. Masur called this sailor “one of the most important representations of a black person in all of eighteenth-century Western art”. Many have pointed to the almost umbilical affinity between the distressed Watson and the cryptic sailor, who stands above the chaos and holds the rope that crosses Watson’s arm and seems to join his flowing blonde hair. Several other critics, including Michelle Wallace, Albert Boime, and Alan Rice, draw attention to the numerous descriptions in travel anthologies during the Atlantic slave trade of corpses being thrown to sharks. While Watson will be saved and is here rendered as a figure of resurrection (nude, bathed in light), so many others were never rescued from these waters. 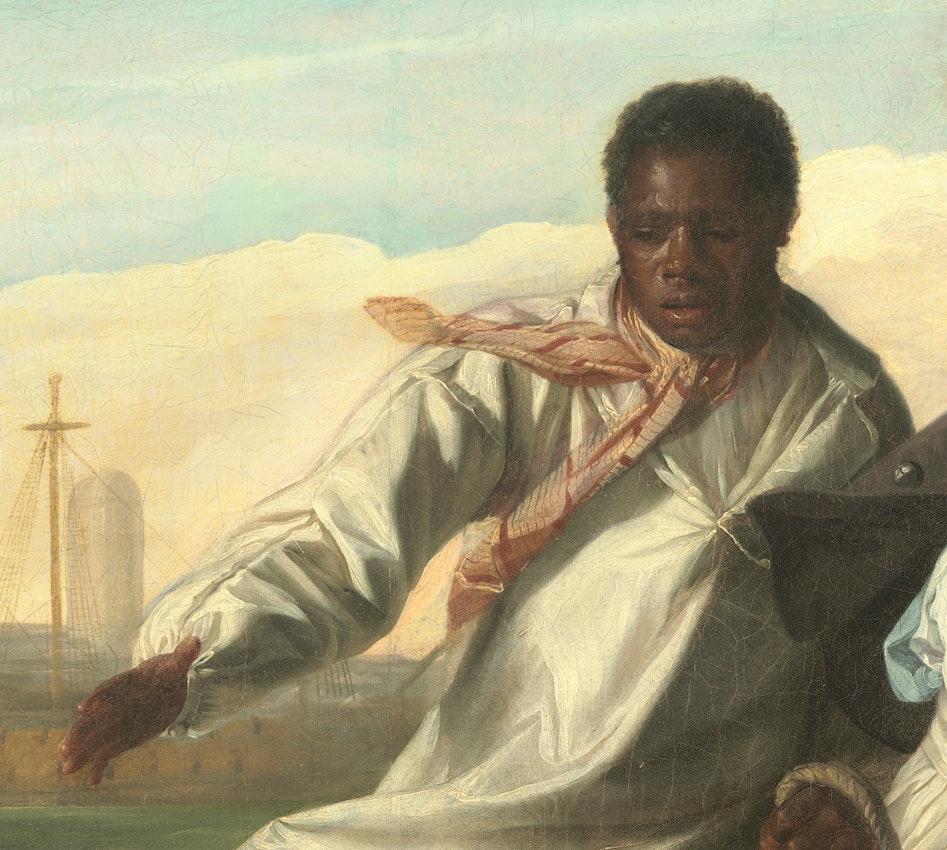