ZENTRALBIBLIOTHEK SOLOTHURN - Patrick Borer picks out some highlights from their collection of 18th-century prints and looks at what they tell us about life in a Swiss city state. 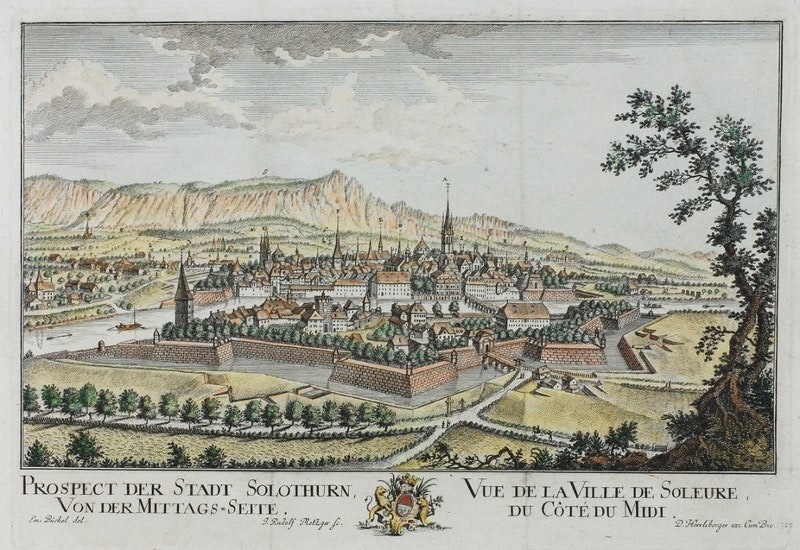 Switzerland is a small yet diverse country. It consists of 26 member states, the cantons, each of them with its own constitution, legislature, government – and a unique history. One of these is the canton of Solothurn. Its roots are in the city of the same name which can trace back its history to Roman times, when it was known as Salodurum. Becoming a Free Imperial City (Freie Reichsstadt) in the Holy Roman Empire in 1218 and joining the Old Swiss Confederacy in 1481, the city state of Solothurn grew in size through buying up available scraps of territory as well as some acquisitions by force, finally reaching its current shape in the early 16th century. It remained a “Stadtkanton” or city canton ruled by its capital, increasingly dominated by a few families – the patriciate. In 1798 forces of the French Republic entered Switzerland and brought an end to the Old Confederacy, and, with it, the aristocratic Ancien Régime in Solothurn, too.

However, before the French Revolution, Solothurn – or Soleure, as the city is known in French – enjoyed an exceptionally close and fruitful relation to the Kingdom of France for hundreds of years. Being loyal to France and strategically well located, Solothurn was chosen as the seat of the French ambassador to the Swiss Confederacy in 1530 which it remained to be until 1792. The close ties to France made Solothurn wealthy, not least through well-paid service of many members of the patriciate as mercenaries in the French army. The ambassadors were members of the higher nobility of France, and the society of Solothurn revolved around their impressive court. Lavish festivities organized by ambassadors lent an air of royal glamour to life in the patrician republic. At the same time, the canton as a whole was still very much agricultural till the end of the French ambassade.

The prints and drawings collection of the Zentralbibliothek Solothurn (ZBS), the central library for the city and the canton of Solothurn, reflects all of these aspects with a particular focus on 18th and 19th century prints. In a joint effort of the ZBS and Wikimedia CH, the local Wikimedia chapter covering Switzerland, public domain files from the ZBS collection were uploaded to the Wikimedia Commons image repository at the end of 2013. In this article, I try to show a slice of life in 18th century Solothurn through some of these images. 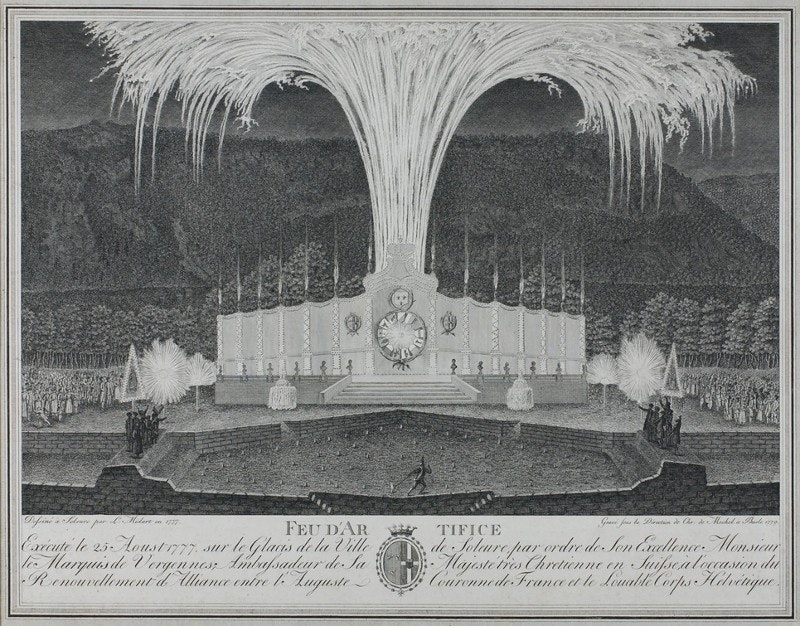 Let’s start with a bang, literally – fireworks! This fine etching by Laurent Louis Midart (1733-1800), a Solothurn artist originally from Lorraine, depicts the elaborate fireworks arranged in 1777 by the French ambassador Jean-Charles Gravier, Marquis de Vergennes, on the occasion of the renewal of the alliance between the Kingdom of France and all the cantons of Switzerland. From May to August, Solothurn abounded with emissaries and other dignitaries; even the travels of Holy Roman Emperor Joseph II led him – incognito – through Solothurn in July. We may speculate whether this was only a coincidence… as the renewed French-Swiss alliance was not least motivated by fears of Joseph II being interested in annexing the canton of Thurgau. Maybe the Emperor wanted some firsthand intelligence… who knows? In any case, the alliance had to be celebrated in an appropriate manner, which evidently included fireworks in baroque style. According to the records of Benedict Bass, a Solothurn citizen who took it upon himself to keep a kind of chronicle of city events in the later 18th century, the fireworks on August 25 lasted from 8 to 10 o’clock in the evening and its “composer” was paid 6000 French livres for it.

Detail from Midart's etching showing the lighter of the fireworks.

Benedict Bass also tells us of the ascent of a hot air balloon in Solothurn in February 1784 – only a few months after the first public demonstrations of the Montgolfier brothers’ famous balloons. According to Bass, two former Jesuits, Father Fabris and Father Tschann, presented an “air machine” that rose to an altitude of more than 5000 Klafter – which seems more than a bit exaggerated, given that a Klafter is approximately equal to 1.8 metres and the Montgolfier balloons reportedly didn’t reach more than 2000 metres. In the ZBS collection, there is a leaflet advertising the planned ascent of a hot air balloon as a charity event to raise donations for orphan boys, dated 1785. 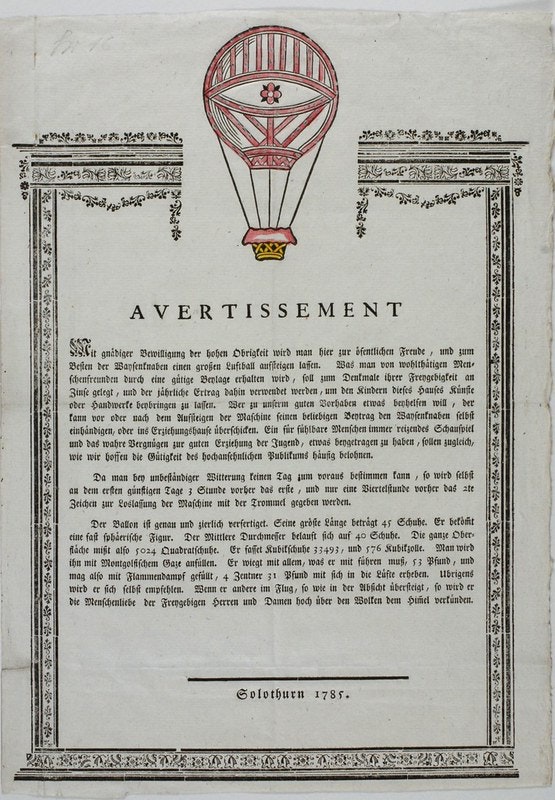 Life in 18th century Solothurn wasn’t all watching fireworks and hot air balloons, of course. Whilst the ambassadors and their dignified guests lived very comfortably indeed, the vast majority were humble people who had to work hard for their livelihood. Many were farmers, and in the ZBS collection we can find particularly numerous examples where activities related to dairy farming are shown. In this subject area, there are more images from the 19th century, as the interest in traditional costumes and activities grew alongside with the modernisation of everyday life, but rural scenes were popular in the 18th century as well. One artist working in this area was Gottfried Locher (1735-1795), who lived and worked in the city of Fribourg (or Freiburg im Üechtland in German) and was known as a prolific creator of high-quality paintings in diverse genres. The ZBS collection contains some depictions of women in traditional costumes by Locher, among them our example of the “woman in green”. Her name is given as Marguerithe Schoeply, working for a Solothurn inn known as the Sternen (“The Star”) or l’Etoile in French which opened in 1634 and operates to this day. The Sternen was also the earliest documented brewery in Solothurn. 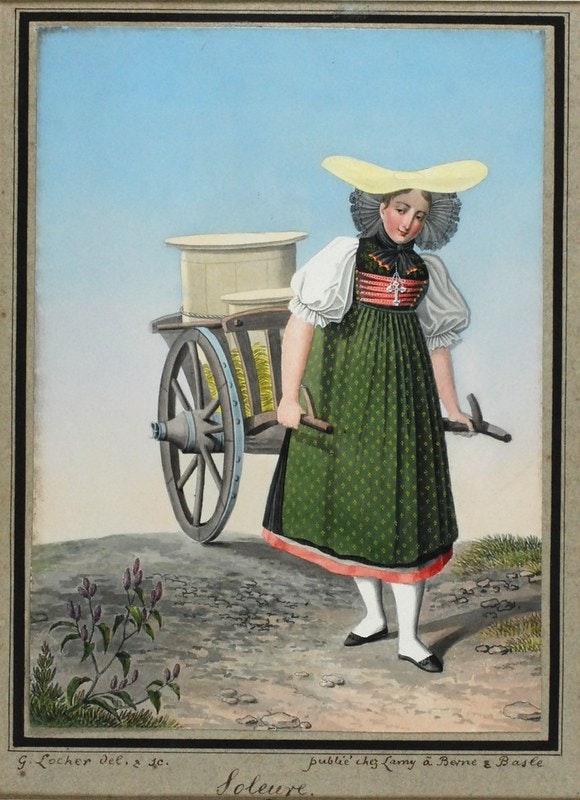 Finally, we shouldn’t forget the military side in this attempt to provide a glimpse of goings-on in old Solothurn. As the military was of particular importance for Solothurn – not just for defence but also as a major source of income for Solothurn’s patrician families through their service for the French – I think it’s not inappropriate to conclude with two images showing military people of a very different nature, respectively.

First a portrait of Johann Viktor (Jean Victor) de Besenval, baron of Brunstatt (here spelt “Brunstach”), 1671-1736. The start of his career is similar to that of many of his contemporaries: After visiting the Jesuit school in Solothurn, he began as a cadet in the French Swiss Guard, then steadily rose in military rank and became a member of Solothurn’s Grossrat (Grand Council). His career in France was successful, he became a Lieutenant General of the French army in 1719 after having been appointed as an extraordinary ambassador to Sweden and Poland. In the engraving from the later 18th century in the ZBS collection, we see an aristocrat advanced in years, looking self-confident though a bit weary. Besenval was married to Katharina Bielińska, daughter of the Polish grand marshal Kazimierz Ludwik Bieliński, which is an interesting detail, as Solothurn has a special relation to Poland to this day – Polish national hero Tadeusz Kościuszko died in Solothurn in 1817, and Solothurn is a sister city of Kraków, Poland, since 1990. 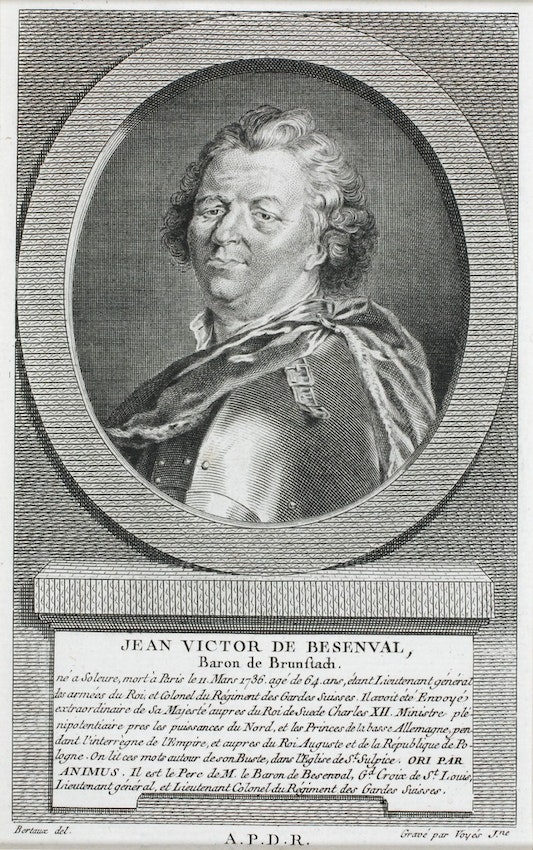 But what about the common Solothurn soldiers? Of course they didn’t receive individual, stately portraits in the manner of our baron. But there are some interesting group depictions in the ZBS collection, of which a particularly charming example is this lithograph by Franz Niklaus König (1765-1832) he created in 1825 after his original drawing of 1789. Here we see the mustering of a group of recruits by a captain – obviously military discipline not yet been drilled into them… 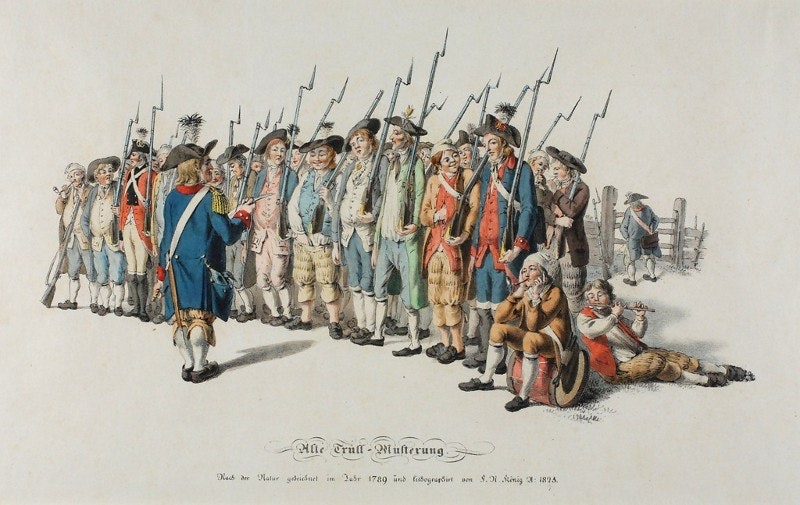 These are just six of currently 1159 historic prints from the Zentralbibliothek Solothurn collection at Wikimedia Commons. A diversity of facets of Solothurn history can be found in them, from documentation of long-vanished buildings to the advent of modern industry and railways. It is also a showcase of various artistic styles and techniques in art printing, from woodcuts to steel engravings. All files in the Commons category are in the public domain and therefore can be used freely. More files will be added to the repository in the future.

I would like to thank Ian Holt, head of ZBS special collections, for taking the time to check this article for some flaws in my English writing.

Patrick Borer is a librarian in the cataloguing department of the Zentralbibliothek Solothurn. Besides his principal duty of cataloguing modern monographs, he is an assistant member of the ZBS IT staff and cultivates relations with the Wikimedia community.