Some three decades before Kerouac and friends hit the road, Sinclair Lewis published Free Air, one of the very first novels about an automobile-powered road trip across the United States. Steven Michels looks at the particular vision of freedom espoused in the tale, one echoed throughout Lewis' oeuvre. 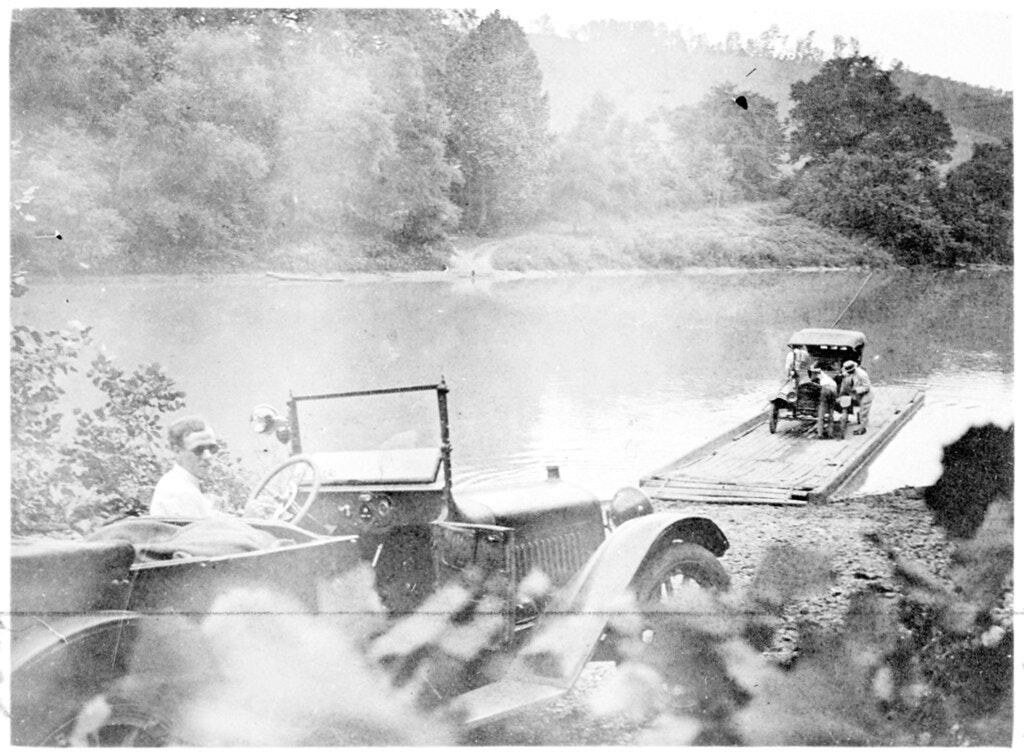 Sinclair Lewis at the wheel of his automobile, ca. 1920s — Source.

Sinclair Lewis is experiencing a renaissance of late — but not for a reason he would have liked. His 1935 novel, It Can’t Happen Here, depicts an authoritarian American president, whose rise and rhetoric very much resemble the current commander in chief.

Criticized at the time for making American fascism sound too European, Lewis’ prescience is remarkable. Eschewing the conservative fear of moral and cultural relativism, the libertarian fear of a regulatory state, and the progressive fear of economic elites and corporations, Lewis follows Plato in pointing to democracy itself as the cause for the slide to tyranny. It Can’t Happen Here, like The Republic, shows how someone elected to satisfy the severe passions of the mass can quickly run afoul of legal norms and institutions.

Lewis’ most affirmative vision of what he means by freedom is found in his novel Free Air, which was serialized in the Saturday Evening Post in the spring of 1919, the year before Main Street and Babbitt made him a household name. Free Air is the story of two young people, Milt and Claire. Milt is a small-town mechanic and garage owner, and Claire is from Long Island and in the middle of a coast-to-coast trip to Seattle with her father. Like many Northeasterners, Claire believes that the rest of the country is filled with folks who are good but simple. Milt knows better. He had been plotting an escape from its dreary doldrums, but is enthralled with Claire when she comes through town, and he ends up following her and her father on their journey west. Claire quickly falls for the heartiness of the outdoors, even though she sees Milt more like a brother than a romantic partner. “There is an America!” Claire cheers by her tent, after she and Milt forgo her usual hotel. “I’m glad I’ve found it!” 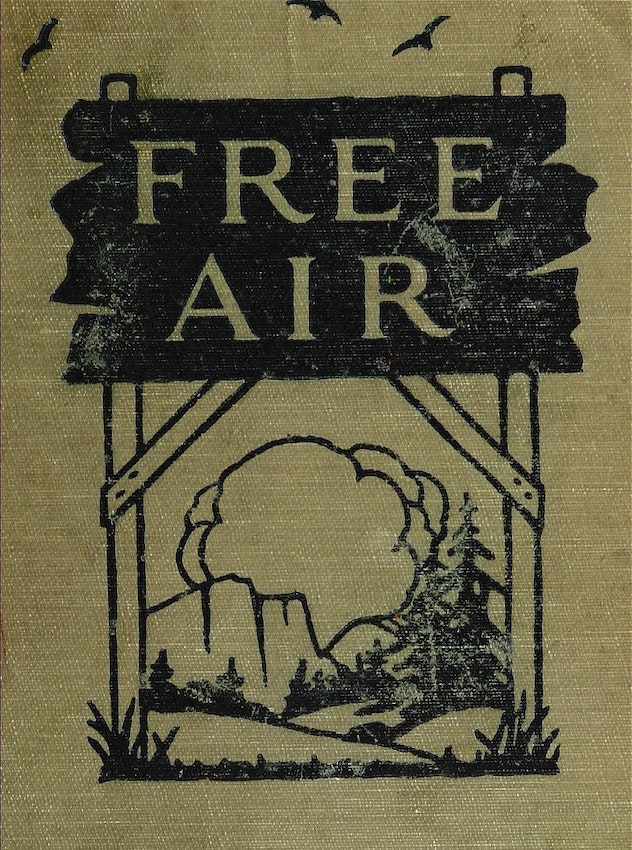 Once they get to their destination, however, they discover that everyone is obsessed with “the View” and ranks houses accordingly. What's worse is that everyone builds and buys from the assumption that houses ought to resemble the East Coast as much as possible. Milt and Claire were looking for something unique and interesting, but instead find a stale sameness and imitation. The book ends with the couple heading back on an open-ended road trip. It might be, Lewis suggests, the only place where they are unburdened by society and its conventions enough to be together.

Free Air is not kind to the petty and conniving rural dwellers, but Lewis’ most devastating take on small-town life appears in Main Street. Lewis, a product of Sauk Centre, Minnesota, rails against the idea that these remote burgs are the source of all that is good. Rather, they infect their residents with “the village virus”, symptomized by a firm ignorance, self-satisfaction, and general intolerance of anyone who doesn’t look or think like they do. Will Kennicott loves weekend driving, but he never gets too far out of town. All the roads he takes lead him back to Gopher Prairie. 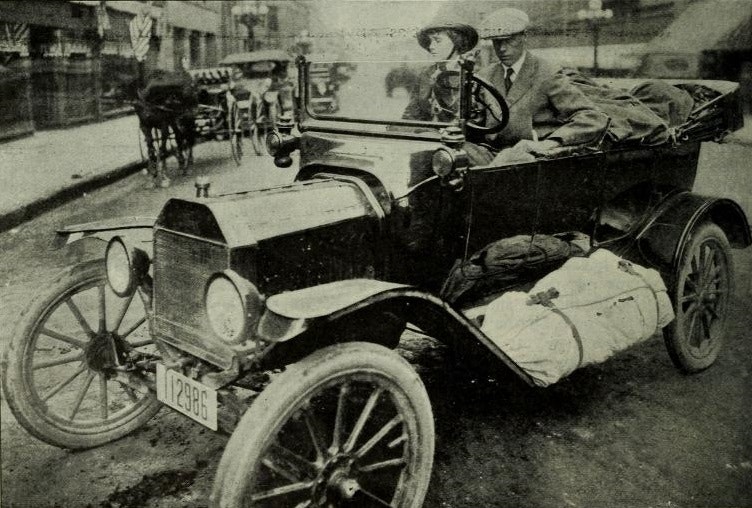 Picture of Sinclair Lewis at the wheel, published in The World's Work (1921) in a piece celebrating the bestseller success of Main Street — Source.

That’s not to say that Lewis touts cities as unqualifiedly good. What is gained by their cosmopolitan sensibility, culture, and good food is lost in a lack of intimacy and familiarity. There is a reason Claire and her exhausted father had left the East Coast. It’s easy and hard in different ways. “We need to know men like that in this pink-frosting playing at living we have in the cities”, she says to an aristocratic suitor, in defense of Milt’s working-class father. The Innocents, the novel Lewis wrote before Free Air, follows the long-married Applebys as they leave New York City to open a tea room in the quiet country. It’s a rare soul that can reside in a city and not be corrupted by it.

This is not just about travel; for Lewis, it is about positive freedom and control. He never presents train travel as especially desirable, constrained as it is to tracks, and his early love of planes is directed at those who can fly them. Americans are rightful captains and pilots, not passengers or spectators. He would have agreed with Thomas Wolfe, who, in You Can’t Go Home Again, posited: “Perhaps this is our strange and haunting paradox here in America — that we are fixed and certain only when we are in movement.” It is only when Wolfe’s protagonist George Webber arrives at a destination, that he feels a sense of homelessness. The expansive country and its prairie makes motion the most natural and comfortable condition. 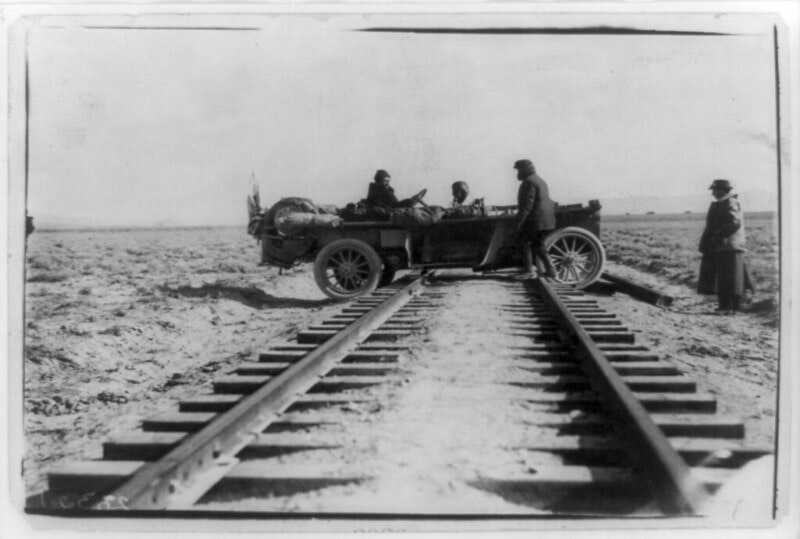 Automobile straddling railroad tracks during a race between New York and San Francisco in 1908 — Source.

Business travel provides both an opportunity and a threat. On the one hand, people who travel for work go through small towns and bring with them information and a perspective about the world outside. Milt is much improved by his time with them. Yet as “missionaries of business”, theirs is a hollow gospel. Business also provides opportunities for independence. Una Golden, Lewis’ protagonist in The Job, moves from a small town in Pennsylvania to New York and uses her business acumen to make a decent life for herself, which for a woman at the time was no small feat. Yet George F. Babbitt and his clique travel to cheat on their wives and expand their bourgeois lifestyle.

Lewis loves America for its individualist philosophy and its pioneer spirit. For him, progress is more about exploring than putting down roots and putting up buildings. Growth is a matter of psychology, not economics. The eponymous anti-hero of Our Mr. Wrenn has to go off to Europe to gain some perspective on his workaday routine. “Adventure, like fear of adventure, consisted in going one step at a time, keeping at it, forming the habit..." Lewis instructs. He operates from a grand and romantic vision of what our expansive territory has made possible, and he worries that we have squandered too much of our good fortune.

Lewis lived his nomadic philosophy — moving from Minnesota to New Haven for school, through New York City, D.C., and with stints in Europe, never in one location for very long and often returning to the same place. “It’s always easier to be a bold adventurer in some town other than the one in which you are”, Lewis writes in The Innocents. His perception of and even his fondness for his native land grew during the time he lived in Europe. “No American, if he can help it, dies in his birthplace”, he wrote. Of course, that did not prevent him from being buried in his hometown. 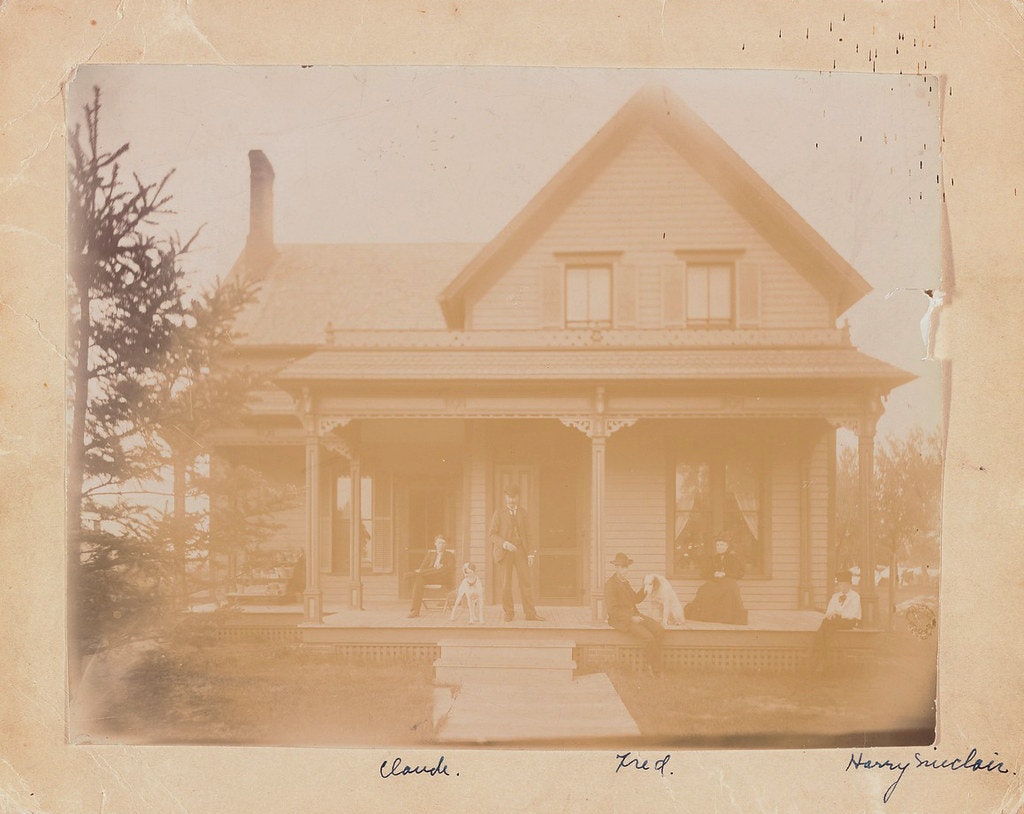 Among Lewis’ gifts are his willingness to probe the essential tension at the heart of American moral and social life. It’s a land of boundless opportunity and fierce competition; it's also a land of individualism that too easily bends toward conformity. Who else could have said: "Intellectually I know that America is no better than any other country; emotionally I know she is better than every other country”? Lewis understands both sides of American exceptionalism. How much better would the country be if it had more of that kind of patriotism.

In some respects, Lewis’ extreme form of freedom could be said to resemble what you find in Rousseau’s “state of nature”, where individuals are untethered by property or people. But Lewis never advocated solitude and he was too much a fan of progress. Two of his early books, Hike and the Aeroplane and The Trail of the Hawk, take the new technology of aviation as their themes. Lewis saw air travel as a modern form of daring, and he held out great hope for what it could do for the American psyche.

There are, however, some interesting parallels between Lewis and the road’s other great prophet, Jack Kerouac. Lewis would certainly approve of Kerouac’s discipline and stream-of-consciousness method. Kerouac is said to have written On the Road in three weeks on a 1200-foot scroll of teletype paper. Lewis, after doing his research, could write 3000-5000 words a day.

For Lewis, however, writing was more about self-improvement than self-expression. He wanted a kind of noble and pioneering freedom and would judge other modes accordingly. He would see Kerouac as a hedonist. Nor did Lewis tout the virtues of alcohol or drugs. He reflects on “the torture of being bored by the two-frequent presence of his own self”, in Cass Timberlane, one of Lewis’ more mature characters. It was the reason Lewis drank, even though he recognized it as a temporary cure. He was, by many accounts, a problem drinker. Self-doubt is a prerequisite for improvement, but it too has its risks. Sometimes the greatest obstacles to freedom are not other people, but ourselves. 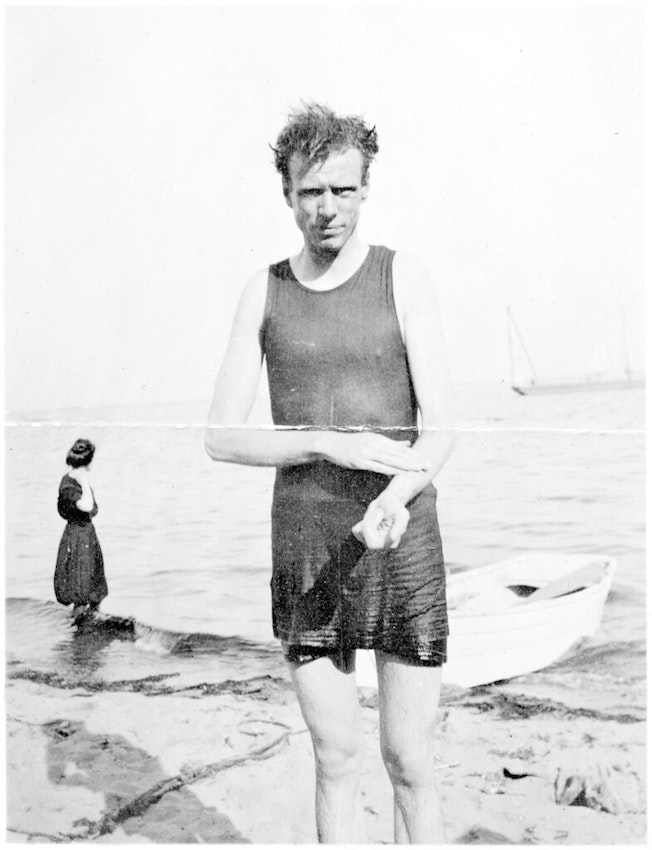 Most importantly, Lewis' moralism was utterly conventional. Although one of the more prominent subtexts of his novels is the extent to which moralists are all hypocrites, he is equally bothered by anyone who operates without a compass of any kind. For instance, there is a rawness and physicality in Kerouac that Lewis would likely have found off-putting. Kerouac’s sex scenes are tame by today's standards, but they were risqué enough at the time to have been edited by his publisher. Lewis’ sex scenes are ridiculous. Sometimes it's not even clear what has happened — what might be called coitus obscurus.

Lewis’ greatest gifts as a novelist were his abilities of perception and mimicry. For the first part of his life, Lewis wanted to be in theater and would regularly delight others with his character portraits and impressions. As a political writer, his greatest asset was his ability to present what he observed without the filter of his own ideology. He was not an activist and not terribly political. It didn’t exactly make him a great citizen, but it made a superior novelist. He had a reporter’s sensibilities, which is why he made a newspaper man, Doremus Jessup, the protagonist of It Can’t Happen Here, his most political novel.

It’s not a stretch to say that he is among the best writers on democratic freedom. More than anyone, Lewis understands its aims and its limitations for both individuals and the country. For him, freedom is playful but serious, directionless but purposeful, and essential to knowing true happiness. Lewis sees that kind of freedom as America’s greatest virtue and best export. It would be tragic if we were to somehow lose it.

Steven Michels is professor of political science at Sacred Heart University in Fairfield, CT and the author of Sinclair Lewis and American Democracy. Visit his personal website or follow him on Twitter.