Armenians and Armenian Photographers in the Ottoman Empire

GETTY RESEARCH INSTITUTE - Julia Grimes introduces a fascinating selection of images from the Pierre de Gigord Collection detailing Armenian life in the 19th-century Ottoman Empire, many from the studio of Armenian photographers Pascal Sebah and the Abdullah Frères.

Benefiting from the continued generosity of French photograph collector Pierre de Gigord, the Getty Research Institute (GRI) has assembled an extensive collection of images documenting the 19th-century Ottoman Empire, specifically the area which we know now as Turkey. A growing number of these photographs depict the Armenian community within the empire, representing religious leaders, families, and individuals in full ethnic dress. Besides those living in Constantinople (present-day Istanbul), the Ottoman capital and location of the major photographic studios, certain images also record details of life in other cities, including valuable views of their Armenian quarters. 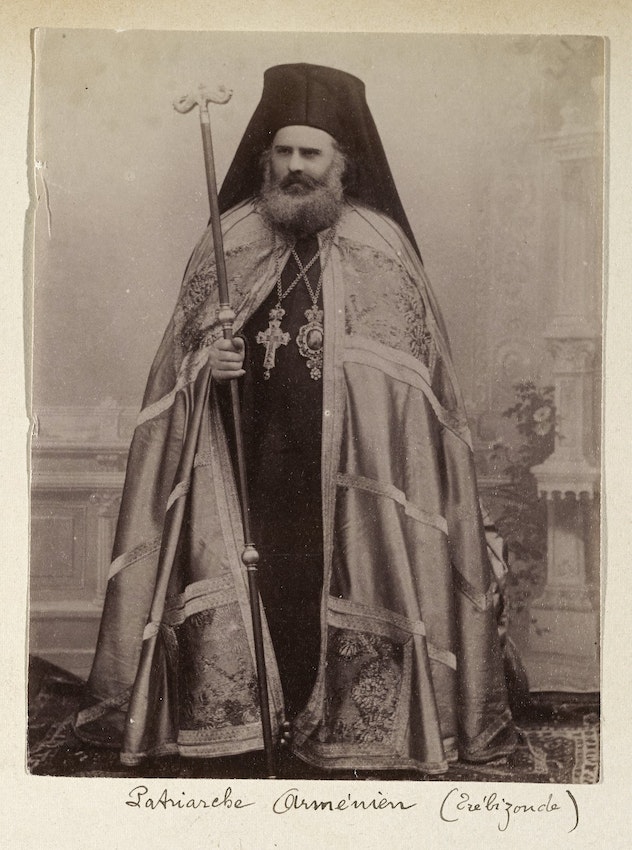 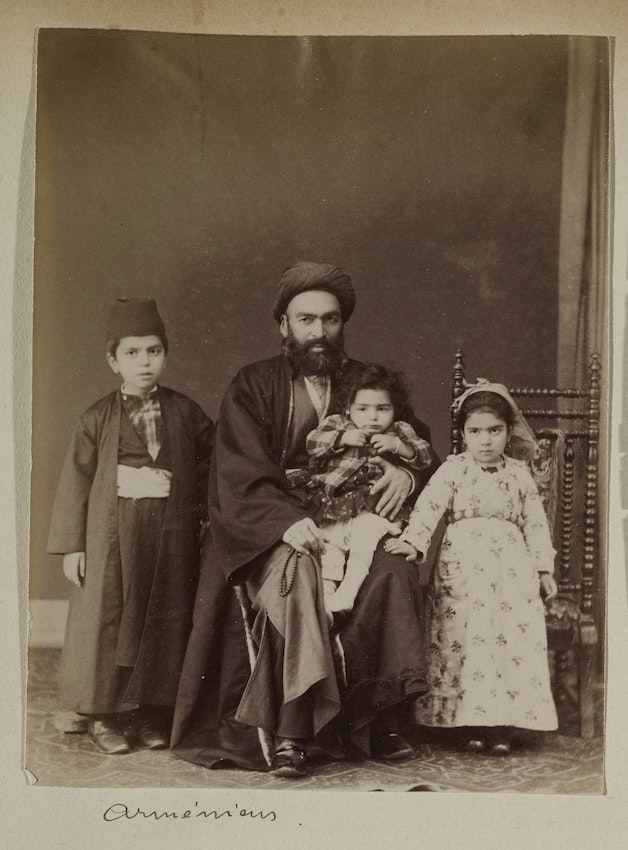 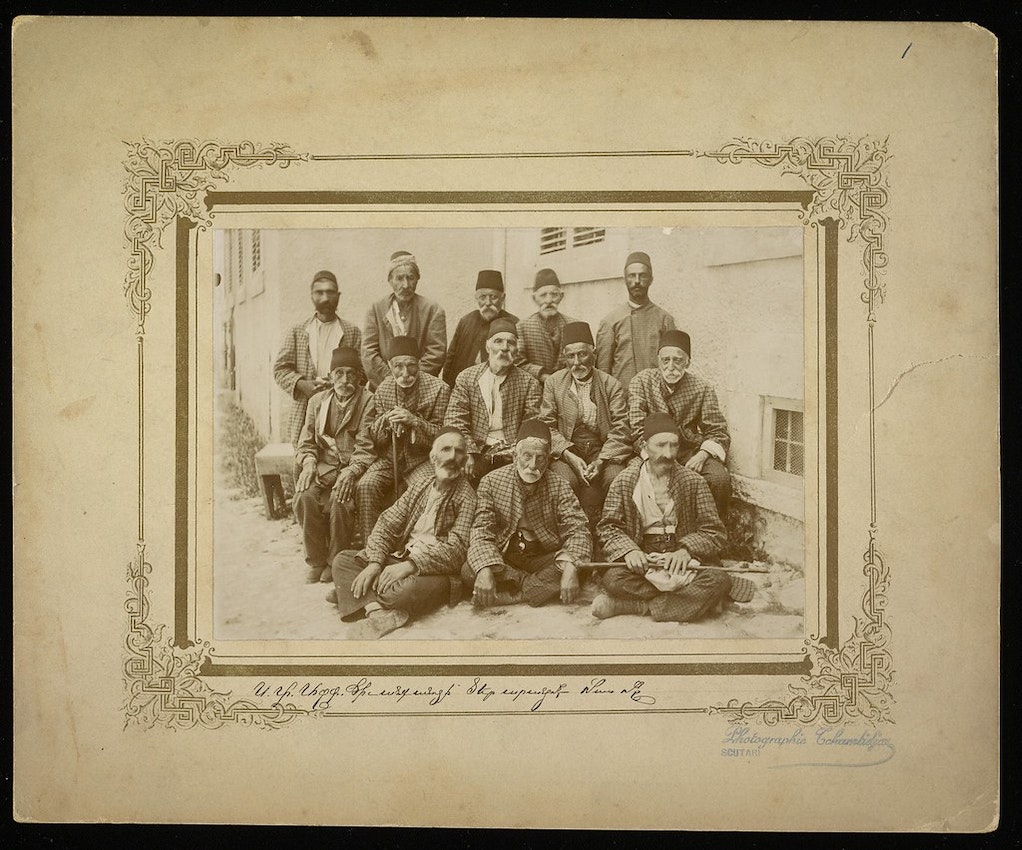 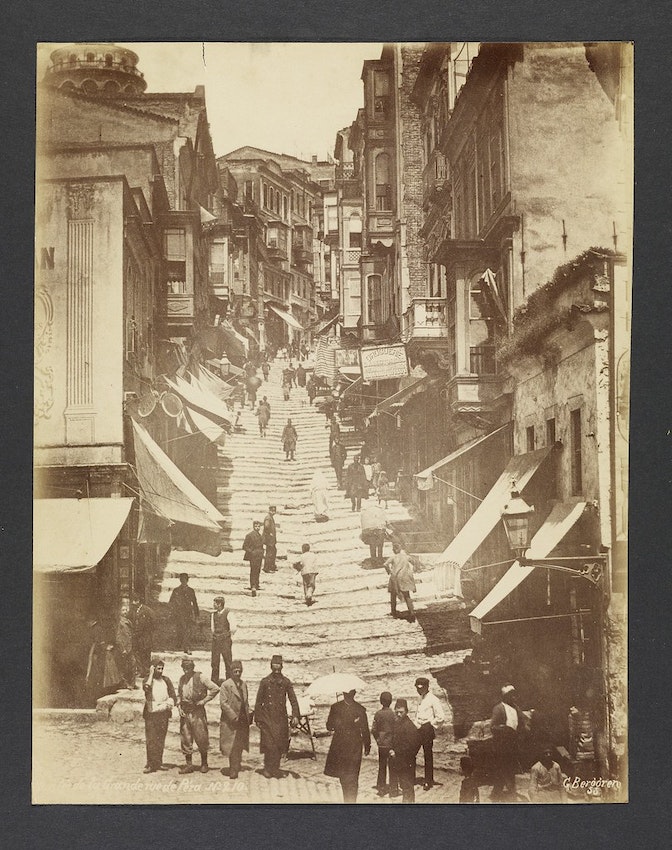 Perhaps the most fascinating aspect of the Gigord collection is the number of images taken by Armenian photographers. Due to the frequent employment of Armenians as chemists, goldsmiths, and pharmacists, many possessed the skills necessary for photography, in particular a thorough knowledge of the chemical processes used in development. During the late-nineteenth century, some of the principal studios in Constantinople were owned and operated by photographers of Armenian descent. Pascal Sebah, for instance, opened his "El Chark" studio in 1857, and by 1873 had achieved such success with his elegant, crisply detailed portraits that he opened a second branch in Cairo, Egypt. By the time of his death thirteen years later, his name had become synonymous with studio photography in Constantinople to the extent that his studio remained active and the new managing partner, Polycarpe Joaillier, changed its name to "Sebah and Joaillier." The business continued to prosper and achieve renown, even adding Kaiser Wilhelm II of Germany to its list of clientele in 1889 during his visit to Constantinople.

A portrait of two Armenian men in full dress taken circa 1875 reveals Sebah's mastery of both the technical aspects of photography and its use as an artistic medium. The men's formal poses show off their wide trousers, scarves, and hats, aspects of traditional Armenian costume that would have immediately triggered recognition among viewers. Their expressions match the dignity of their posture. This is a posed studio photograph, likely staged by Sebah and his assistants to portray these men as a "type," or as representatives of the Armenian ethnic group to which he also belonged. The control of tonalities, or the manner in which the sepia color of the photograph varies from light to dark, expressing areas of illumination and shadow, is among the qualities which most clearly signals Sebah's skill as an artist. 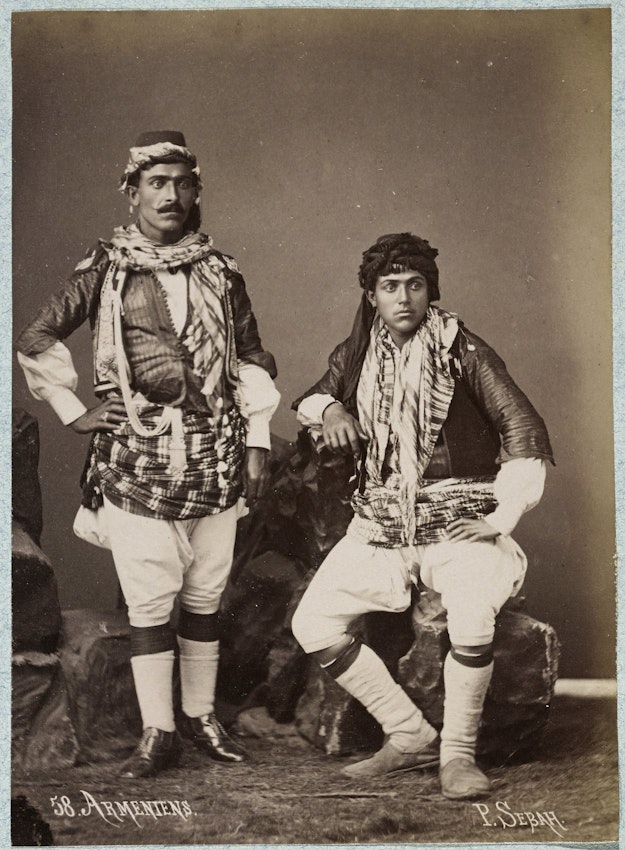 Similar control of composition and tonality is visible in Sebah’s album, Les costumes populaires de la Turquie en 1873, commissioned by Ottoman diplomat, artist, and founder of Istanbul’s Academy of Fine Arts, Osman Hamdi Bey. In seeking a photographer to depict the peoples of the Ottoman Empire for the 1873 International Exposition in Vienna, Osman Hamdi Bey chose Sebah due to the refined elegance of his style. The image of an Armenian bride, the central figure in Plate V, captures this quality with the manner in which the dangling tassels, necklace, and gold pattern of the bride’s costume catch the light, contrasting with the delicate lace of her veil. 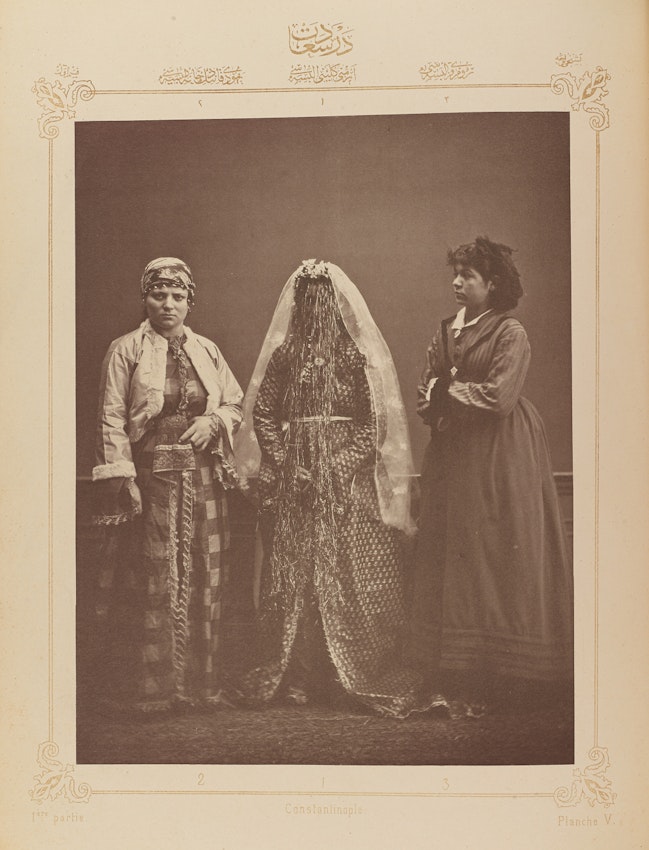 The high standards set by Pascal Sebah remained a hallmark of his studio, even after his death. The 1894 Sebah and Joaillier image of the Armenian Quarter in Brousse, located across the Sea of Marmara from Istanbul, for instance, presents an unusual view taken up a hill. As in the image of the two Armenian men, the mastery of tonalities for which Sebah’s studio was known is again on display. The bright midday sun posed a challenge, since it could easily wash out the details of gestures, faces, and objects, but the photographer deftly dealt with this issue by positioning the small child to the right of the road underneath the last in a row of trees, allowing the shadows to compensate for the glare. Close inspection reveals that each person in the image has been placed in the shade, either of the trees or of the two-story buildings on the opposite side of the road. 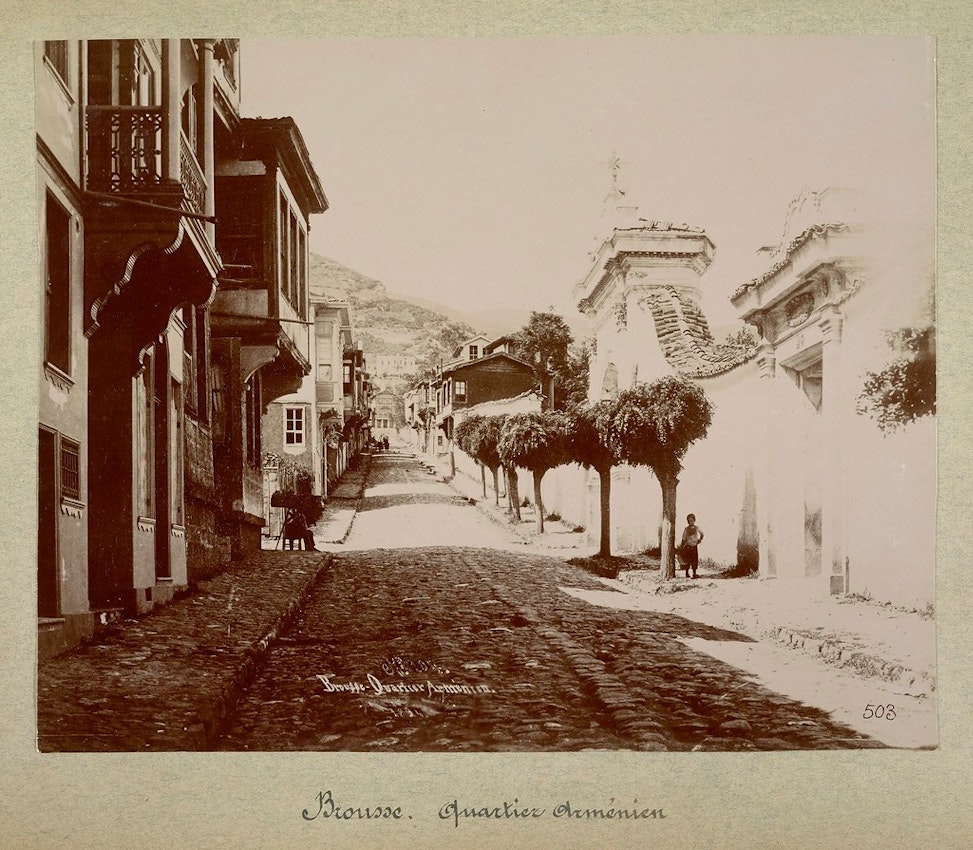 The "Abdullah Frères" studio, run by three brothers of Armenian descent, opened in 1858 and quickly became so honored for its technical skills and artistry that just five years later the brothers were named royal photographers to the Ottoman Sultan. In 1867, they exhibited their 220 cm-long panorama of Constantinople at the second International Exposition held in Paris, moving beyond the studio to prove their equal ability as landscape photographers internationally. They hosted a distinguished clientele during these years, photographing Edward, the Prince of Wales, during his visit to Turkey, and Eugénie, the Empress of France. By 1886, their fame had spread as far as Egypt, and at the personal request of the Khedive (Viceroy) there, they also opened a branch in Cairo which lasted for the next decade. Interestingly enough, their Constantinople studio merged with that of Pascal Sebah when Abdullah Frères sold it to Sebah and Joaillier in 1900.

The Abdullah Frères excelled at capturing landscapes, “types,” and scenes of daily life in the major metropolises of the Ottoman Empire. Their photograph of the Galata Bridge, the bridge spanning the Golden Horn in Constantinople and one of the city’s principal landmarks, is remarkable for its view of the Old City. As minarets soar in the distance, the blurred images of boats in the middle ground suggest a bustling site of commerce, an urban landscape where the traditional meets the modern in dynamic patterns of exchange. 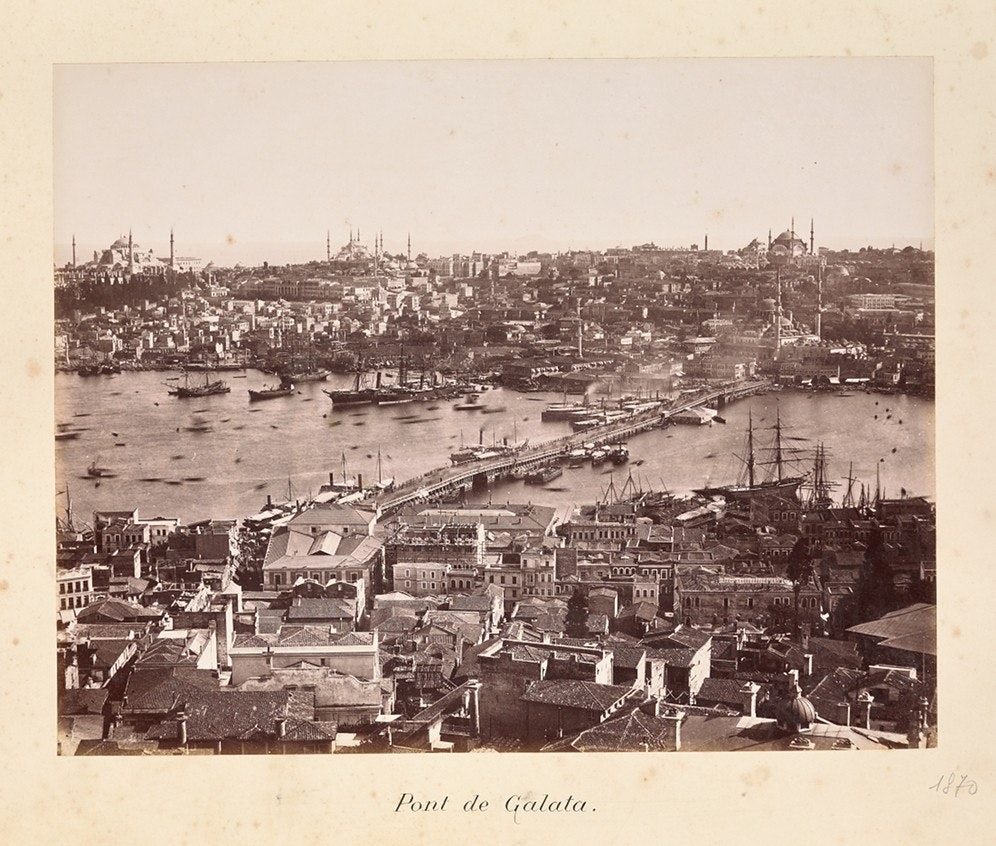 A set of five studio photographs depicting a porter and varied types of street vendors stages a similar interchange, for although the men’s occupations are traditional, they are now being represented using the contemporary medium and conventions of photography, including backdrops, studio lighting, and carefully choreographed poses. 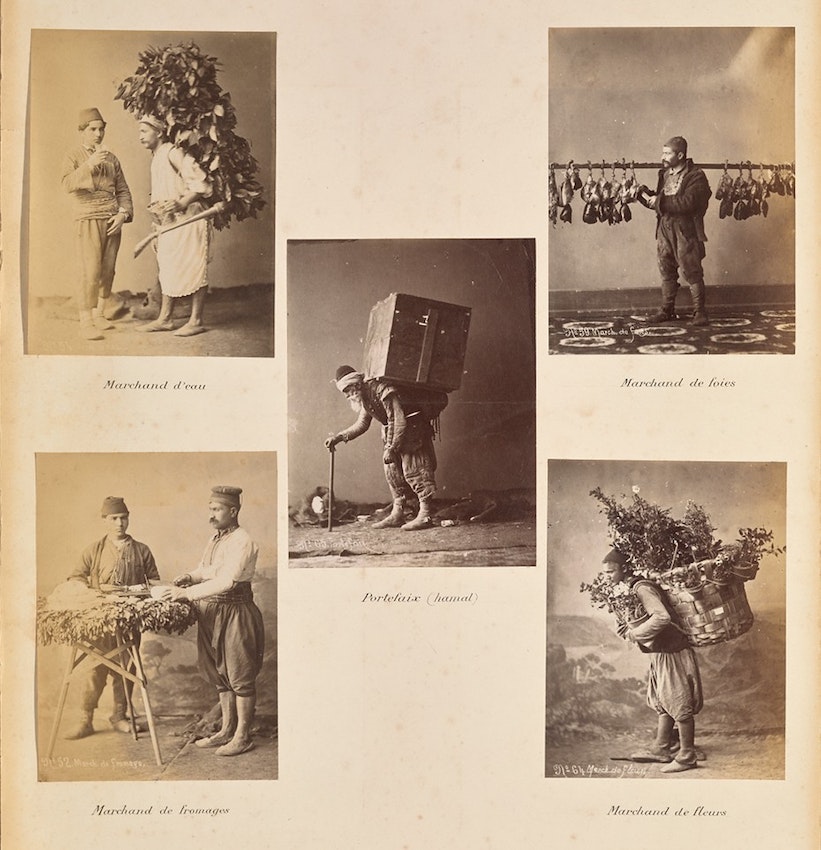 Less rigorously staged, yet full of energy, is the Abdullah Frères image of a fire brigade in Constantinople. Due to the age and proximity of many structures, along with the extensive use of wooden timbers in construction, the city lived under constant threat of fire, and firefighters thus held a significant role in the community. By dedicating an album page to them specifically, the Abdullah Frères recognized their importance to civic life, simultaneously displaying the preparedness and modernity of Constantinople’s municipal services. 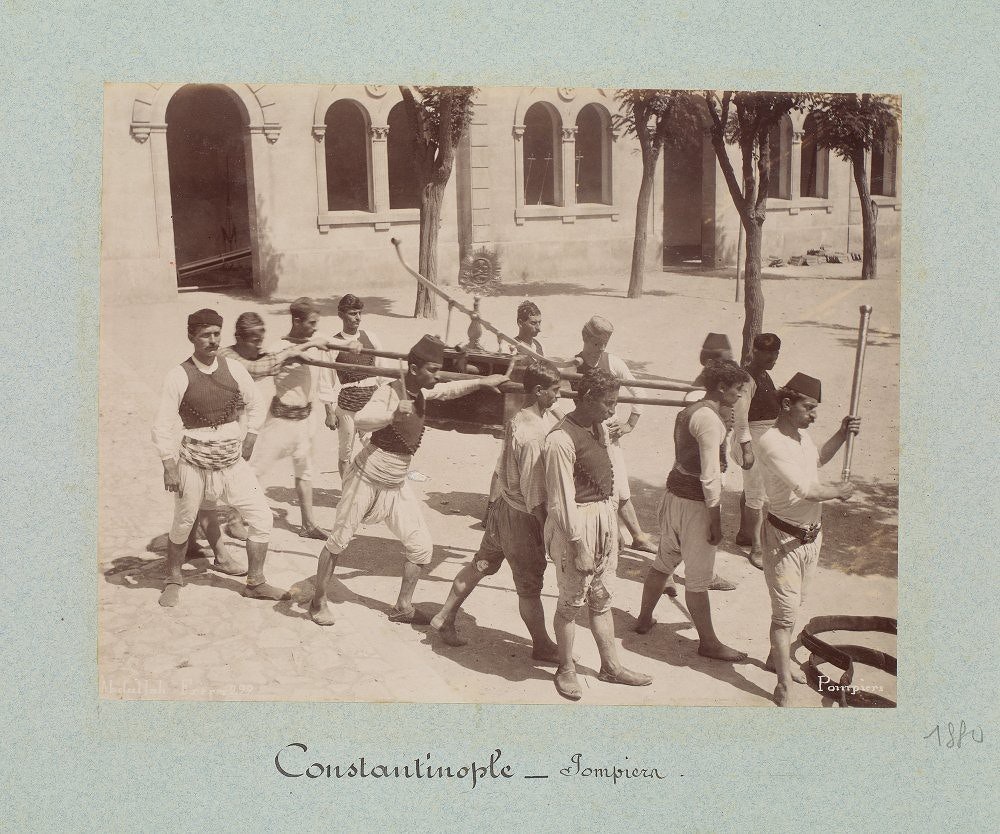 These brief examples reveal only a fraction of the extent of Armenian involvement in photography during the late-nineteenth century. There were dozens of other Armenians working not only in Ottoman lands but in Eastern Europe and Central Asia whose legacy still remains to be explored. As the number of images from the Gigord Collection available in the Getty’s digital collections continues to grow, it is our hope that information about this remarkable historical link between the Armenian community and photography in that era will become more widely accessible, and that fresh discoveries will continue to be made. The history of photography is a relatively new discipline, and this chapter is still being written.

Julia Grimes is completing her Ph.D. in Chinese modern and contemporary art at the University of California, Los Angeles. She has been a research assistant at the Getty Research Institute since 2010.