Autochromes from the Te Papa Collection

Announcements of the Lumiére brothers’ autochrome process were reported widely in New Zealand newspapers during late 1907 and early 1908. The process was described as a dream come true for photographers longing to discover a way of making photographs in a process that was able to represent natural colours. However, while the process was eagerly anticipated and widely discussed it has remained a minor footnote in histories of photography related to New Zealand. Like the earlier daguerreotype and ambrotype, autochromes are unique, one off photographs which produce an image directly onto a glass plate rather than a negative, an aspect which no doubt appealed to amateur photographers with artistic aspirations.

In early 1908, Wellington photographer Elizabeth Greenwood gave a reporter from the Dominion newspaper a first-hand demonstration of the process.1 Greenwood exposed two plates – one a portrait of a group of girls and the other a still life – giving the reporter the chance to compare the resulting plates with the real subjects in the studio. The portrait plate was exposed for 30 seconds with the only favourable result being the brilliant reproduction of a blue dress worn by one of the subjects. Meanwhile Greenwood exposed the second plate of a still life scene for three and half minutes resulting in a plate the reporter described as more brilliant than the actual scene – rich in colour and detail including in the shadows.

However, it wasn’t long before the inadequacies of the autochrome process for widespread commercial use was raised. In May 1908, in response to rumours in Auckland, the city’s Star newspaper printed an advertisement in which a monetary reward was offered to the person able to produce a colour print on paper using a process that could be of commercial value. According to the advertiser someone in the city was claiming to have done ‘what the cleverest scientific men in Europe have so far failed to do, that is, to produce Photographic Prints in Natural Colours.’2 The advertiser, G. F. Jenkinson, stressed he was not interested in ‘an autochrome transparency upon glass, which are now fairly common and of no value except as lantern slides.’3 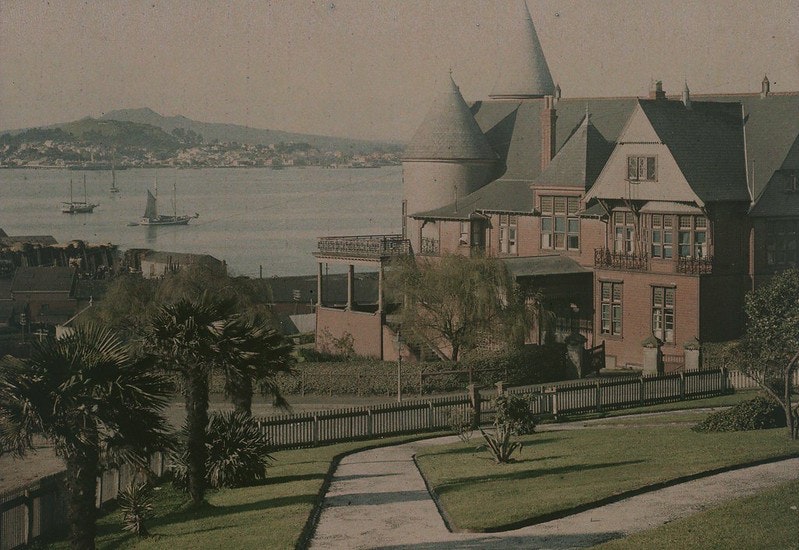 If exposed autochrome plates were so common in New Zealand during the early years of the twentieth century, the Museum of New Zealand Te Papa Tongarewa only has a small but representative collection of photographs comprised of the work of just three photographers: Robert Walrond, James Chapman-Taylor and A. H. Eaton. The collection is notable for the similarity of the subject matter with photographers from other countries who also used the autochrome format in so far as images of women, floral and still life compositions, and scenic landscapes dominate. The cost of the autochrome plates limited use of the format in New Zealand and perhaps also lead to a greater adherence by photographers here to careful use of their plates and staying with the subjects suggested in guidebooks. 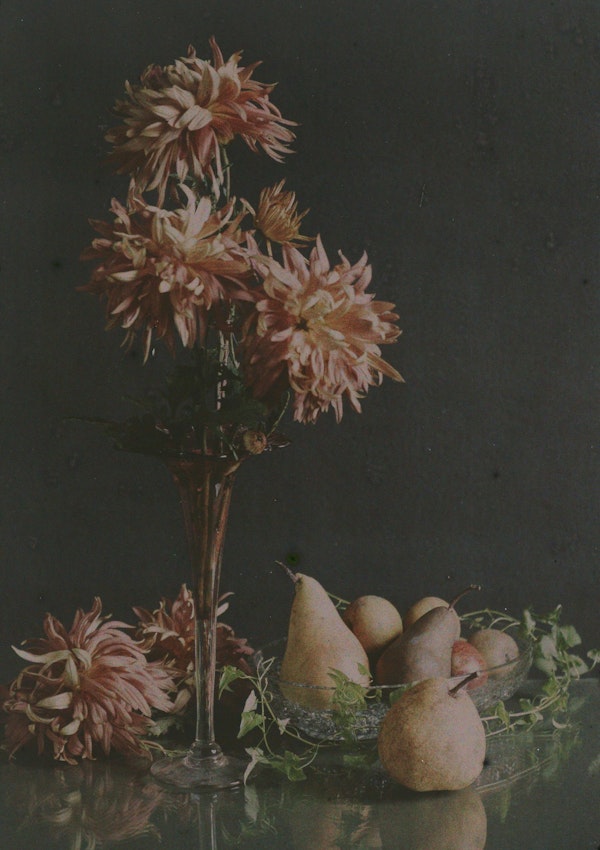 That autochromes were mounted on glass seems to have meant that their use remained mainly in the hands of amateur photographers and those seeking to make colour images for use in scientific lectures. The autochrome’s ability to represent scenes in colour made it an appealing process to those wishing to pursue it for artistic and scientific uses. One such use in the name of science was by Captain Scott's expedition photographer Herbert Ponting who, in October 1910, was on his way south via New Zealand with photographic equipment he hoped would enable him to document on autochrome the ‘natural colouring’ of Antarctica.4 Both the Getty and the National Gallery of Australia hold some of Ponting’s autochrome photographs of the ice continent.

Later in 1928, another visitor, this time from the United States, came to make autochrome photographs of New Zealand’s indigenous Māori people. Photographer Fred Payne Clatworthy was part of the National Geographic Society’s project to record ‘native races of the world, especially those which are dying out, and is making every effort to secure autochrome photographs of representatives of every native race.’5 Today the photographs Payne took in New Zealand have fallen into obscurity unlike the indigenous Māori culture that he sought to record for posterity.6

The majority of autochrome photographs in Te Papa’s collection were made by Robert Walrond, an Auckland photographer whose work was published in New Zealand newspapers and who was an enthusiastic and highly regarded member of the Auckland Camera Club. Like Elizabeth Greenwood’s demonstration for the reporter, Walrond’s autochrome photographs tend to be more successful when made under controlled light situations though there are some exceptions. "Cleopatra" in Domain Cricket Ground (1914), is a theatrical group portrait of four young women dressed in costumes. The combination of sun and wind on the appearance of the textiles is stunning, especially the effect created with the silk scarf suspended over the woman on the couch. Why Walrond made this photograph is unknown but it might have been related to an event that was part of the Auckland Exhibition which was on in the same location that year. 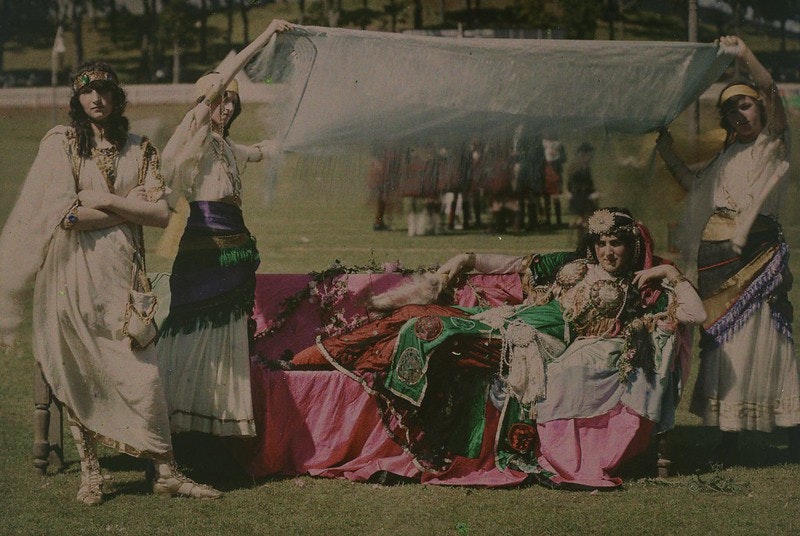 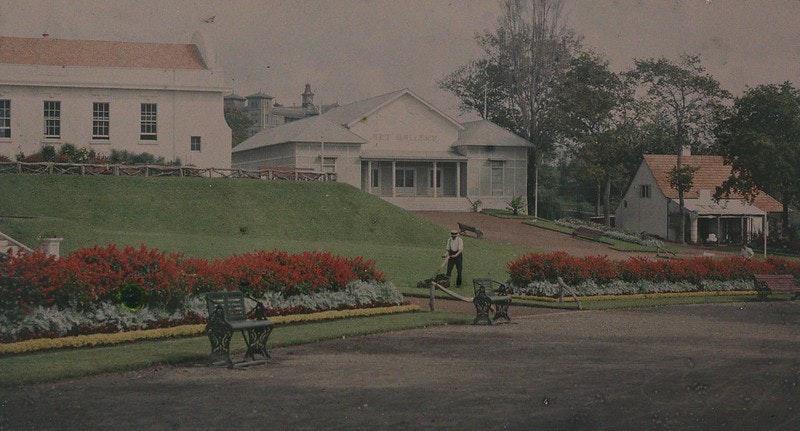 Due to their suitability as subjects for long exposures, still life compositions made for rich autochrome photographs. This fine art genre was ripe for photographers to create set ups that evoked nature and the changing seasons rather than just documenting found scenes. For still life arrangements photographers could select objects of certain colour combinations to compose stronger colours in response to their knowledge about the autochrome palette. Placing complementary colours together enhanced richness – hence the popularity of red and green colours in autochrome photographs. For the still life Gaillardias (1918), Walrond combined a dominant palette of yellow and blue to achieve a strong painterly three dimensional effect. While, Wellington Amateur Photographic Society member Albert Eaton’s cool Still life with vase (1900-30), almost captures the view out of windows reflected in a large sky blue vase. 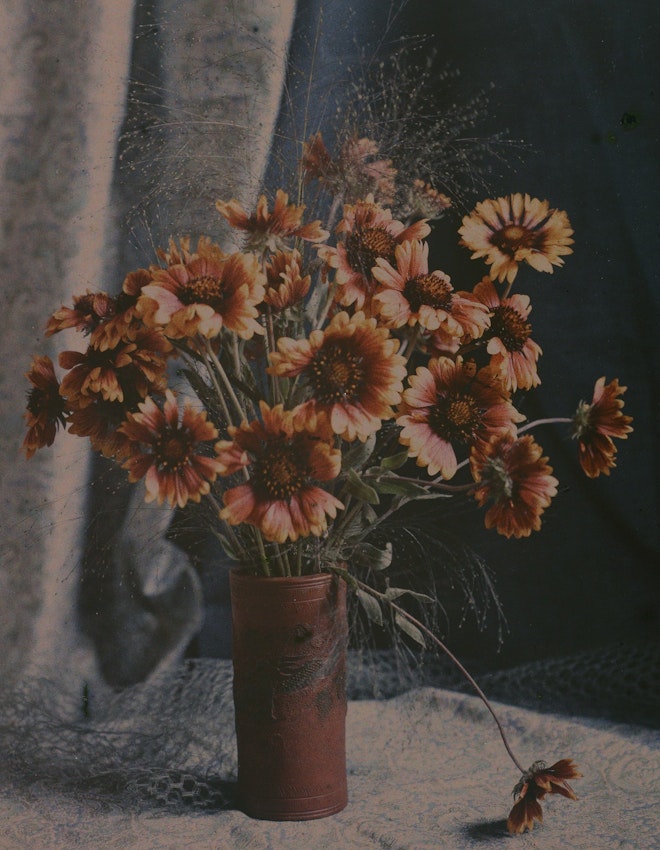 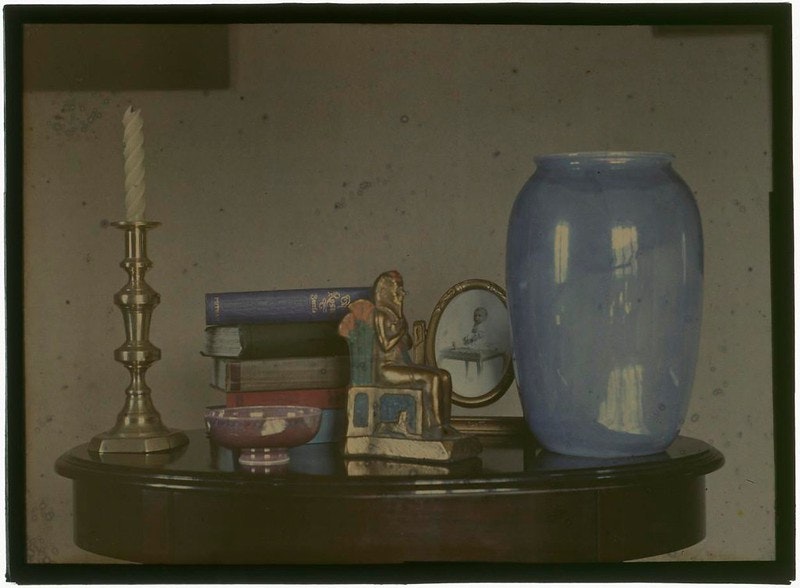 In one of Walrond’s still lives Ranunculi (1914) a green book sits on the table beneath a vase of flowers. Under magnification the book is revealed to be the Barnet Book of Photography (1898), presumably influential enough as a guide book for the photographer to include it within one of his formal compositions. The multi-authored Barnet volume promoted the gaining of a high level of knowledge and skill in the many different processes and applications of the medium by professionals and amateurs alike. The aim of the book was to help those with a love of photography in the art of improving their photographic work. The book advocated studying the work of great portrait painters and photographers and attending as many exhibitions as possible to view prints. 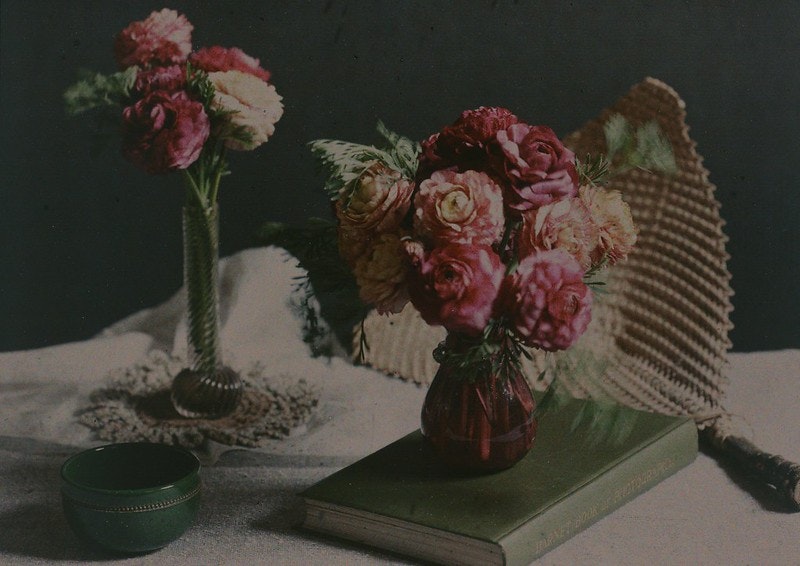 In Te Papa’s collection of autochrome photographs there are three portraits of different women – one by each of the three photographers whose work is held. From vases of flowers to floral patterned curtains, all three photographers combined elements of the still life genre into their portraits of women dressed in clothing presumably chosen to highlight the textural and tonal effects of the autochrome process. Like still life, portraiture was another long established genre of art which photography commercialised and made available to larger numbers of people during the nineteenth century. In these portraits the photographers make use of the still life mode to help them recover photographic portraiture back from the commercial realm to that of an art. 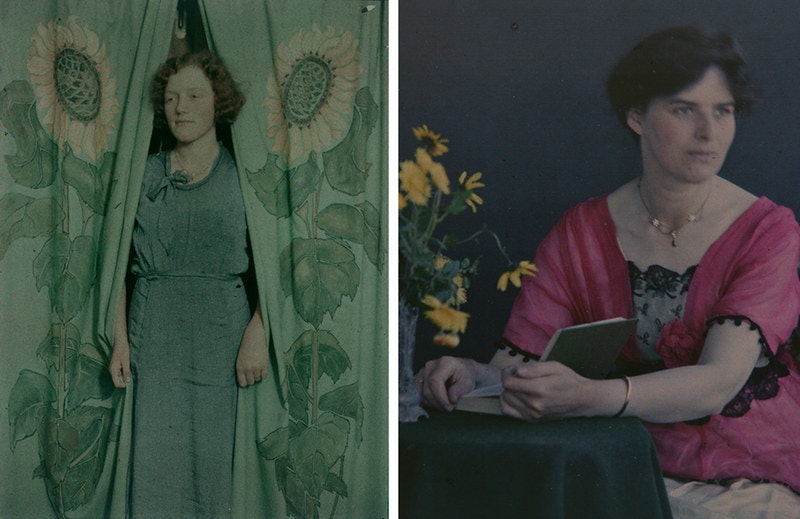 In New Zealand there are few recorded uses of the autochrome and it seems to have remained largely within the realm of amateur photographers and the camera club movement. The inability to reproduce images made with the process alongside the awkwardness of viewing the plates with an illuminated light source hindered the popularity of the process. The sad reality that there are so few examples held within public collections in New Zealand is perhaps a combination of several factors, among them the fragility of the glass plates and a reluctance to address photography from the Pictorialist era as a serious art form. Hopefully, as understanding of the process increases, more plates will be identified, with many potentially lurking hidden within collections of glass lantern slides.