Carel and Abraham Allard in the Court of Momus 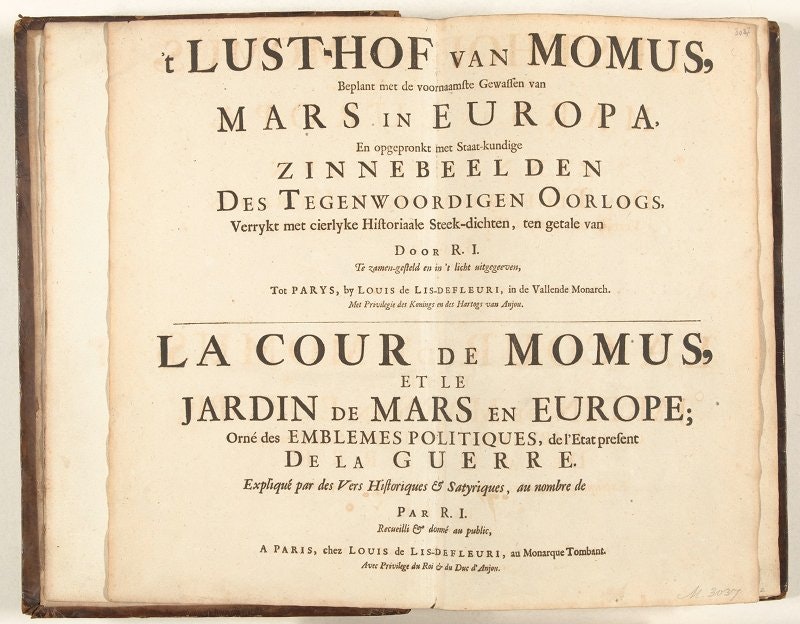 One of the lesser known sub-collections of the Rijksmuseum's impressive and rapidly growing collection of digitised works is the set of ‘history pictures’ compiled by the Amsterdam art dealer, auctioneer and publisher Frederik Muller (1817-1881). After his death in 1881 the Rijksmuseum was able to acquire this important collection of c. 25.000 prints, drawings and books illustrating the history of the Netherlands, including a remarkable series of prints published in 1713 by the Dutch printmaker Abraham Allard under the title 't Lust-Hof van Momus (Fig. 1). In translation the full title reads: The Court of Momus, planted with the principal crops of Mars in Europe and decorated with political emblems of the current war and embellished with elegant historical and satirical poems.

The volume contains 127 prints, all of which pertain to the war between the Dutch Republic and France, part of the War of the Spanish Succession which raged in continental Europe and overseas between 1701 and 1714. Although Abraham Allard (1676-1725) was responsible for publishing the collected prints, a large part of the prints had been previously etched and published separately as broadsides by his father Carel Allard (1648-1709), more or less simultaneously with the depicted contemporary events.

Carel and Abraham Allard were based in Amsterdam and ran a shop between the other publishers and sellers of books and prints in the Kalverstraat near the Dam Square. Carel Allard was one of the major publishers of prints and maps during the Golden Age in the Netherlands and after his death in 1709 his son Abraham took over his father’s business. Both father and son however acquired an ill reputation due to accusations of copyright infringement and the publication of obscene images, a reputation which the prints in this volume would seem to confirm. When Carel Allard in 1699 applied for privilege to publish prints with the States of Holland he was informed that this would only be possible if he submitted his work to examination in advance. The reason for this being that Allard had previously both in Amsterdam and in Frankfurt been accused by the authorities of producing obscene and inflammatory prints.

Typical for the rather crude nature of the satires in The Court of Momus is one of the prints from 1706 (Fig. 2). 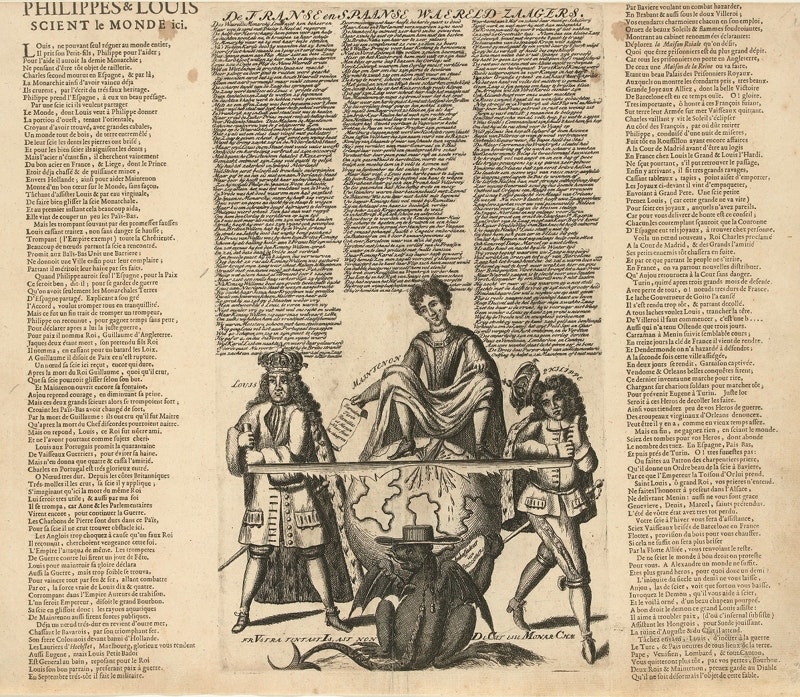 The print carries the Dutch title De Franse en Spaanse Waereld-Zaagers (The French and Spanish sawyers of the world). The image ridicules the French king Louis XIV and his vassal Philip V of Spain in their attempts to rule the world by sawing the globe in half with a two-handed saw. In 1700 the Spanish king Charles II had died childless and in his will named the French Philip, the duke of Anjou and grandson of Louis XIV, as his successor, thus starting off the War of the Spanish Succession. In 1706, after much fighting in Germany, Italy and the Netherlands, Spain became the main theatre of war. Perched on top of the globe is ‘Maintenon’, this is Françoise d'Aubigné, better known as the Marquise de Maintenon, mistress and second wife of king Louis. As the two kings try to divide the world - the Old World for Louis and the New World for Philip - they discover that the world is tougher than they thought and that their saw is blunt and missing teeth. To assist the kings in their task Maintenon wets the toothless saw by urinating on it, or rather, as the inscription informs us, by opening her sluices and letting her ‘virginal’ waters flow. Although witty, it can easily be imagined that this satire might also have been considered to be in bad taste.

A sub-series of nine images centre on the events of the year 1708 during the War of the Spanish Succession. The first print in this series (Fig. 3) separately published as a broadside is titled Zinnebeeldige Komeet, Wegens de Nieuwe Engelse Prognosticatie, Voor het Jaar 1708; nader verklaard in een Samenspraak tussen Starnar en Warnar (Emblematic comet drawn on the English predictions for the year 1708, explained in a dialogue between Starblind and Confused). 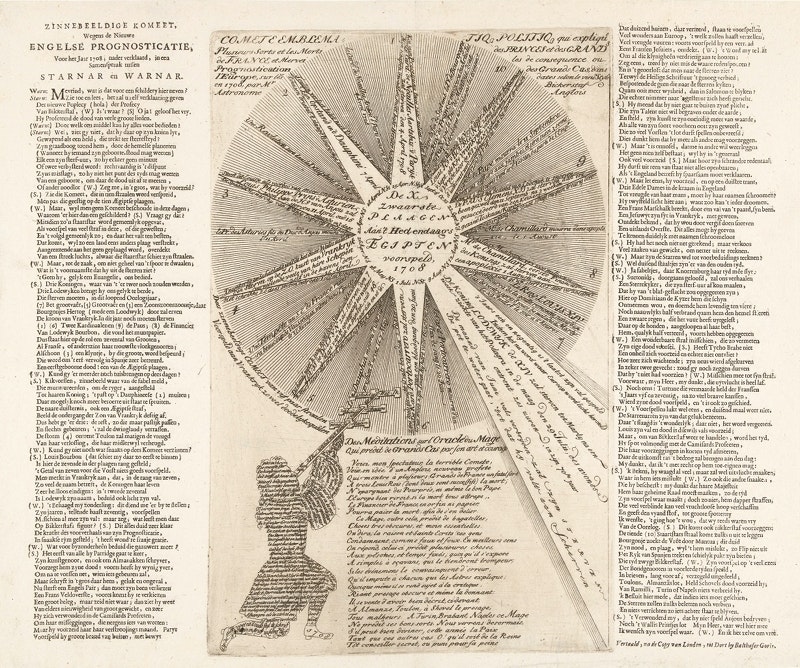 Typical for this group of prints the image is completely composed of etched text. The kneeling figure is identified as the famous English astrologer Isaac Bickerstaff who is prognosticating the future with his Jacob's staff or cross-staff. In the rays of the comet or star Bickerstaff predicts the ten plagues which befall the French nation, the modern day Egypt. For example, on the fifteenth of April a severe storm will wreak havoc on the southeastern coast of France and on July 29 king Louis XIV himself will die of a sickness of the stomach. Carel Allard has drawn these predictions literally from a Dutch translation of the English letter Predictions for the Year 1708, the famous attack on Almanac-makers and astrologers written by Jonathan Swift under the pseudonym of Isaac Bickerstaff. In the third line of the Dutch verse on the left Allard has Starblind introduce the prophecy by mistake as a poplecy or a poplexy. In the text on his cross-staff Bickerstaff declares that with these predictions he risks his art’s respect which will cause him to blush in shame if they fail.

Several later prints feature the British Queen Anne in a somewhat risqué manner and focus on the preliminary negotiations for peace with France in 1711 which were part of the main Peace Treaty of Utrecht, signed on April 11th 1713, and which officially brought the War of the Spanish Succession to an end. 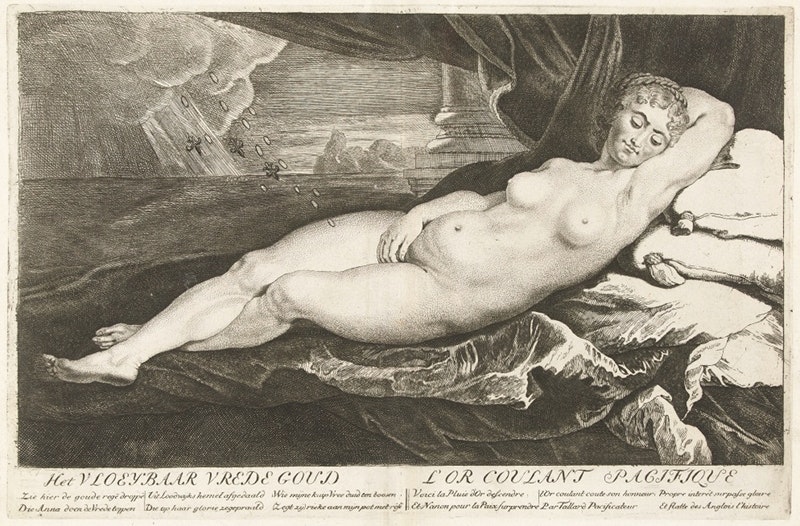 The original print showed the mythological Danaë impregnated by Zeus in the form of golden rain. In Allard’s version ‘The Liquid Gold of Peace’ Danaë is identified in the inscription as Queen Anne as she is showered with golden drops or coins and French fleurs-de-lis. In accepting the advances of the French king Louis XIV Anne shows her willingness to accept the French peace proposals. In a final somewhat suggestive note Allard has Anne declare that those who doubt her intentions for peace should ‘smell my pot of roses’.

In another print featuring a mythological theme Allard gives the original image an imaginative and remarkable political twist. The source for this copy is an engraving by Claude Mellan after Simon Vouet and shows Psyche armed with a knife visiting her unknown lover, the sleeping naked Amor. In Allard’s copy Psyche is Queen Anne posed ready to castrate the sleeping pretender (Fig. 5).

The pun in Allard’s Dutch title De Britse Pis en Pas Afsneister is somewhat lost in the English translation ‘the British Piss cutter and forestaller’. It refers to Anne securing her succession by the Hanoverian dynasty as part of the Utrecht Peace Treaty of 1713. One of the conditions of the treaty required Louis XIV to expel James Francis Edward Stuart, the old pretender, from France and recognise Anne’s German Protestant successors from the House of Hanover. Allard chose or perhaps the copperplate offered him the chance to illustrate this cutting off of the Jacobean claim to the British throne as an act of castration. The inscription further tells us that the unarmed sleep of peace is the best time for such plots, but had he - Amor, the pretender - one arrow left, he would swiftly fell the peace.

Later writers have either largely ignored the Allards’ political satires or dismissed them as vulgar and valueless. Now this judgment seems too harsh. The examples from the Lust-hof van Momus discussed above demonstrate that Carel and Abraham Allard were capable of both creating original and amusing images as well as ingeniously adapting existing ideologically neutral prints into novel and unique political satires, works of art in their own right.

Daniel Horst was born in the United States in 1958. He studied art history at the University of Amsterdam and received his doctorate in 2000 at the Free University Amsterdam for a dissertation about printmaking and propaganda during the Dutch Revolt. He publishes regularly on religious and political prints from the sixteenth and later centuries. He has been a research associate at the Rijksmuseum Amsterdam since 2006.