Dr Mitchill and the Mathematical Tetrodon

One of the early Republic's great polymaths, New Yorker Samuel L. Mitchill was a man with a finger in many a pie, including medicine, science, natural history, and politics. Dr Kevin Dann argues that Mitchill's peculiar brand of curiosity can best be seen in his study of fish and the attention he gives one seemingly unassuming specimen. 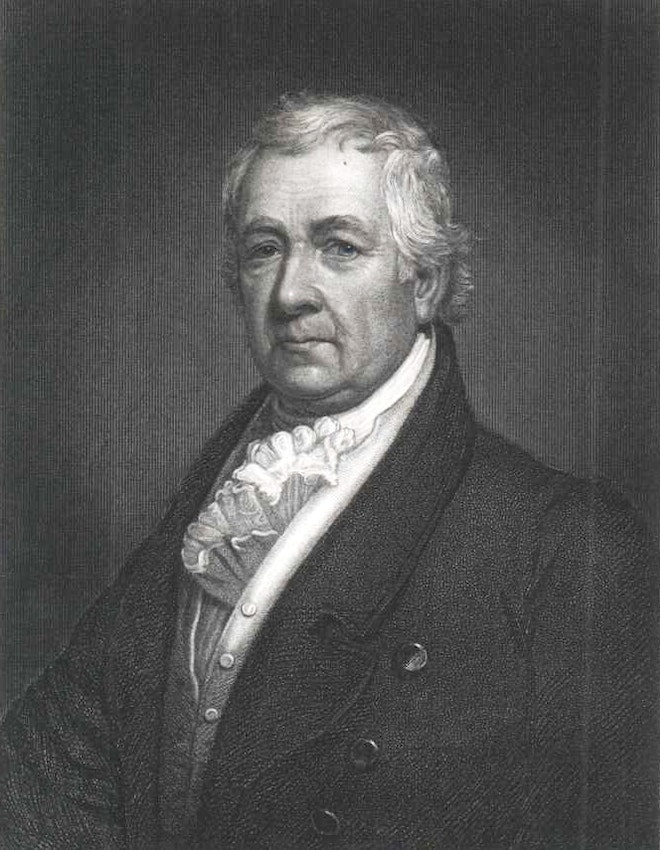 On the streets of lower Manhattan in the early nineteenth century, the “Nestor of American science,” Dr Samuel Latham Mitchill (1764–1831) was the commonest of sights, going about in his blue coat, buff-colored vest, and buckled shoes. Though a conspicuously local figure, Dr Mitchill was equally cosmopolitan. After the British occupied New York City, he had left his medical practice to study at the University of Edinburgh, where he rubbed elbows with such notables as Sir James Mackintosh, who would become the preeminent Scottish jurist; physician and anatomist Caspar Wistar; and Thomas Addis Emmet, Irish revolutionary and later American lawyer and politician. He was also a colleague of the leading philosophes of London and Paris. Perambulating the streets of Gotham, Dr Mitchill’s voracious curiosity treated his native city as inquisitively as if he were on a pioneering scientific expedition abroad.

“Pioneering” is in no way too provocative a word for Dr Mitchill, whose entire biography seemed to play out along the frontier of science and technology. An early advocate of the new Lavoisierian system of chemistry, his 1797 mineralogical survey of New York included an analysis of the Saratoga mineral waters. Sir Humphry Davy’s conception that acids were substances that contained replaceable hydrogen was aided by Dr Mitchill’s research on septic acid. He exchanged observations and speculations upon American climate, geology, paleontology, and ethnology with Thomas Jefferson; brought out the first American edition of Cuvier’s Essay on the Theory of the Earth (1818); and then improved it considerably for his American audience by his detailed narrative of the bedrock landscapes of “Fredonia” (the alternative name he proposed, and long cherished, for the United States of America), especially the New York City region. With Priestley he penetrated phlogiston, that mysterious substance transcending the alchemists' four classical elements; with Jefferson and Peale, he probed the “American incognitum” — the mastodon. In the words of a late-nineteenth-century biographer:

He wrote largely to Percival on noxious agents. He cheered Fulton when dejected; encouraged Livingston in appropriation; awakened new zeal in Wilson the ornithologist, when the Governor, Tompkins, had nigh paralyzed him by his frigid and unfeeling reception; and, with Pintard and Colden, was a zealous promoter of that system of internal improvement which has stamped immortality on the name of Clinton.

Through no other single person could one receive such a capacious window upon the intellectual landscape of early-nineteenth-century Gotham; indeed, Washington Irving’s Knickerbocker’s History (1809) was inspired largely as a satirical response to Mitchill’s straight-laced and rather soporific history, Picture of New-York (1807). Dr Mitchill’s curiosity knew no bounds, so that two hundred years later, if one follows him in his inquiries, one gets the most extravagant and inviting picture of the rapidly changing city. Everywhere and always he was concerned with life, and so the narrow streets of Lower Manhattan become enlarged and enriched through his eyes.

In 1826, in a discourse to his fellow Lyceum of Natural History members about the scientific accomplishments of his old friend Thomas Jefferson, Dr Mitchill — who in 1817 had traveled to Chester, in Orange County, to disinter the teeth, bones, and tusks of a mastodon — took special note of Jefferson’s own interest in the incognitum, a key element in his patriotic effort to refute Count Buffon’s proclamations of American “degeneracy”. Sharing Jefferson’s acute republicanism and cosmopolitan erudition, Dr Mitchill’s zoology was also loftily political and expertly informed but always tinged with homespun wisdom. In his report on the Chester mastodon, when he noted that the "dexter prong" (the right-hand tusk) was more heavily worn than the "sinistral" (left-hand side), he took it to be a “manifest indication of preference for what the drivers of animals call the off-side limbs”. He was constantly alert to the peculiar sagacity of his neighbors. 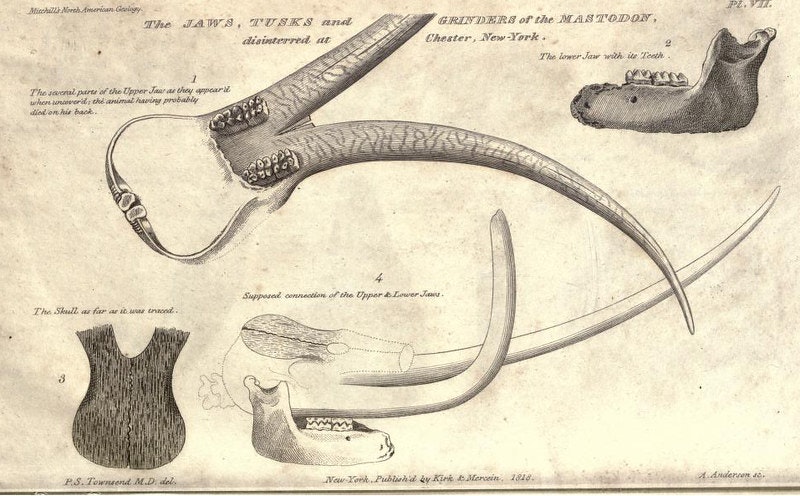 Illustrative plate depicting the jaws, tusks, and grinders of the mastodon, from Cuvier's Essay on the Theory of the Earth (1818) — Source.

The taxonomic range of Dr Mitchill’s scientific investigations may have rivaled Barnum, but of all the strange creatures that caught his perspicacious eye, the piscatorial tribe was paramount. From his quarters on Barclay Street, a block from City Hall and the Park, he would make frequent strolls to the Fulton Fish Market — sometimes accompanied by students from Columbia College or the College of Physicians and Surgeons — to see what the local nets had lately brought up from pelagic parts both far and near. Having grown up in “Plandome” (North Hempstead, Long Island), he was well-acquainted with the fish of Long Island Sound, and for all his exotic interests, the humbly vernacular fishes about the North River, East River, and their confluence just off the Battery were at the epicenter of his ichthyology.

Along with the routine anatomical descriptions that make up the main body of his "The Fishes of New York, Described and Arranged", published in Transactions of the Literary and Philosophical Society of New-York, Volume 1 (1815) (1815), nearly every one of the 166 species described offers some small literary or historical gem. Of Sparus ovis, the sheepshead, he declared:

Nothing, in the opinion of a New Yorker, can exceed boiled sheep’s head served up at a sumptuous dinner. . . This noble fish . . . the feats of hooking and pulling him in, furnish abundant materials for the most pleasing and hyperbolical stories.

Dr Mitchill imagined some future day when the fish would be brought to New York “in perfection”; for now, he regretted, “the sheep’s head too often corrupts for want of ice.” Centronotus, the crab-eater — the last entry in his “Fishes of New York” and the only species for which he felt obliged to invent a new taxon — also merited high culinary praise: “This fish was boiled and served up at my table; on which occasion, my family, servants and all, had but one opinion — that it was one of the best we had ever eaten”. 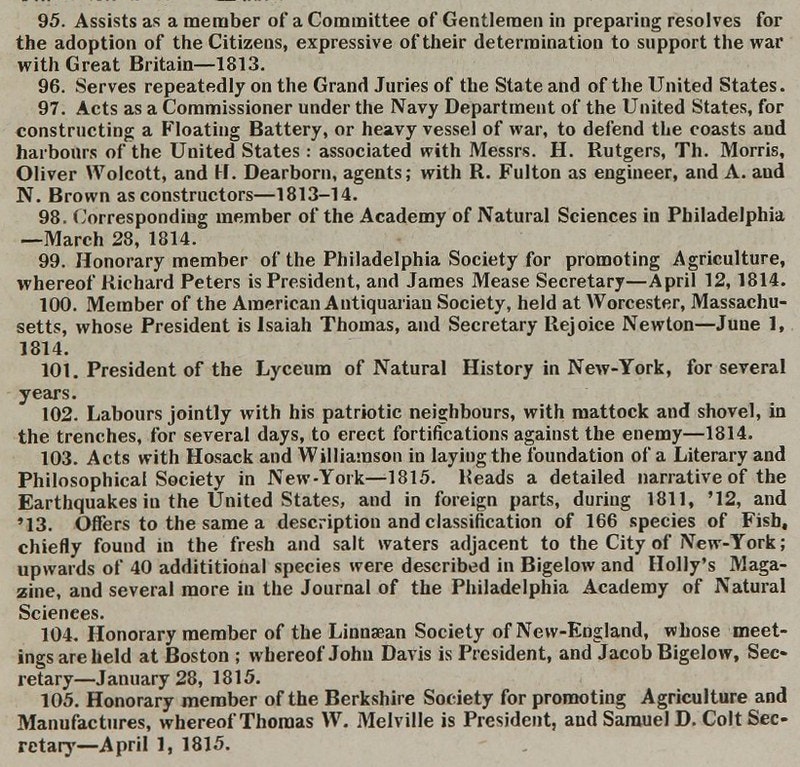 In Dr Mitchill’s day a vast repository of natural history still lay in local folklore, and he was keen to record it. In earlier days the custom was to bait one’s hooks for Tautog, or Blackfish, in early April, when the dogwood came into blossom; now that the dogwood was nearly gone from lower Manhattan’s streets and yards, the American chestnut tree served as phenological prognosticator, and Dr Mitchill duly noted a common rhyme among fishermen:

Children too were ready sources for Dr Mitchill. Writing about the different species of sturgeon, he included the bit of arcana that local boys found the gristle taken from sharp-nosed sturgeon was much less elastic than that of the blunt-nosed, and so a ball made from it did not bounce so well. As a longtime intimate of Robert Fulton (Dr Mitchill was among the passengers on the Clermont’s maiden voyage in 1807), one should not be surprised to find that the steam wizard supplied him with ichthyological specimens. Fulton had caught an Orange file-fish (Balistes aurantiacus) on August 1, 1814, and promptly passed it on to Dr Mitchill, who then asked his brother-in-law, Staten Island physician (as well as pioneering agricultural reformer and co-founder of the New York Institute for the Blind — all of these men seem to have been prodigious polymaths!) Samuel Akerly, to draw the fish.

In Dr Mitchill’s day — as it still often is in our own — natural science was in its essence a pursuit of sensuous Beauty, masquerading as a heroic quest for Truth. Even the lowliest of fishes revealed the beauty of Creation to Samuel Latham Mitchill, and in glancing back at his encounter with a lowly local fish, we can witness his response to that beauty, framed by the meeting of the local with the cosmopolitan. He examined his single specimen of the Mathematical Tetrodon, Tetrodon mathematicus, on June 29, 1814. The War of 1812 was still going on; a month before, the Treaty of Paris had been signed, and Napoleon had been exiled to Elba the same day. The two-dozen cannons installed at the West Battery Fort (today’s Castle Clinton) were still trained out onto the waters from which the Tetrodon and most of Dr Mitchill’s other specimens had come. 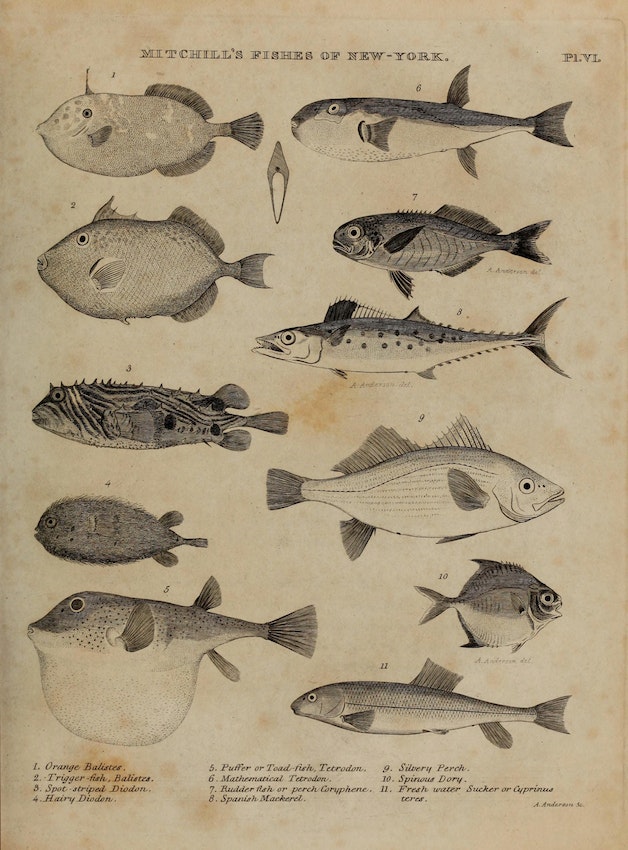 Plate VI from Mitchill's "The Fishes of New York, Described and Arranged", published in Transactions of the Literary and Philosophical Society of New-York, Volume 1 (1815) (1815). The Mathematical Tetrodon appears top right — Source.

Detail depicting the Mathematical Tetrodon, from plate above.

It seems rather an unassuming fish, standing there as it does on the same Plate VI with such lovelies as the phantasmagorical Spot-striped Diodon; its congener Hairy Diodon — which looks for all the world like some Ed Koren rendering of a small Upper East Side dog; and the diminutive but arresting Spinous Dory. One must turn to Dr Mitchill’s species account to find why the little pufferfish becomes a much more luminous member of both his taxonomy and lexicon:

Lateral line departing from the ring encompassing the eye, like a tangent; ascending in a superb curve toward the back; sweeping boldly down from the olive of the back through the satin of the side; and then running direct to the tail; putting one in mind of the ecliptic cutting the equator. . . Another line from the eye-circle to the transverse line, and parallel to the lateral line, making a sort of parallelogram.

He seems here to be some kind of piscatorial William Blake, seeing a World in the external markings of a humble fish, as if he were holding the infinity promised by mathematics in the mucus-covered palm of his hand.

Kevin Dann’s books include Enchanted New York: A Journey Along Broadway Through Manhattan’s Magical Past (2020) and Expect Great Things: The Life and Search of Henry David Thoreau (2017). He leads extra-vagant bike tours in New York City. More at: www.drdann.com.