In 1906, Geronimo published his autobiography recounting the fascinating story of his life, from his years as a resistance fighter, to his capture and subsequent period of celebrity in which he appeared at the 1904 St Louis World Fair and met President Roosevelt. Edward Rielly, author of Legends of American Indian Resistance, tells of the tragic massacre which underpinned his life. 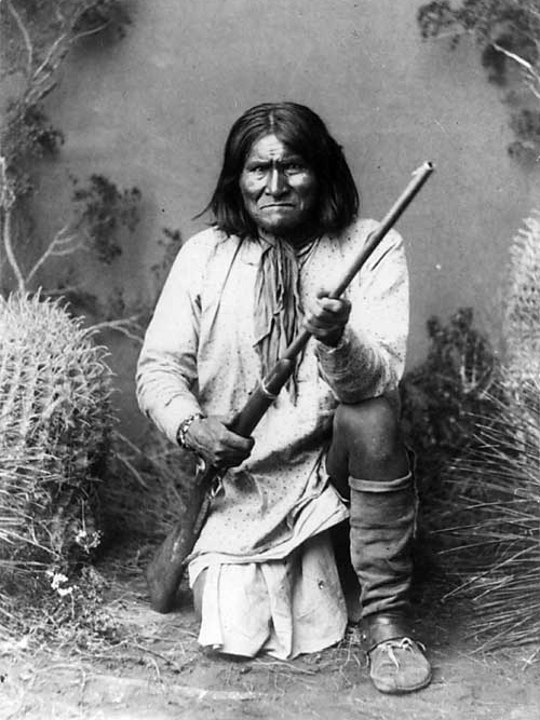 Geronimo (1829-1909), whose given name was Goyahkla, sometimes spelled Goyathlay, is one of the most famous figures in the history of the American Indian resistance effort. His name is virtually synonymous with that of a warrior, so much so that his name has been appropriated for a wide range of military (or simply adventuresome) endeavors. Geronimo’s reputation is well deserved, for his very name excited fear in settlers both north and south of the U.S-Mexican border. He was hated by Euro-Americans and even by some Apaches, who blamed him for continuing to stoke the fires of warfare after ultimate defeat of the Apaches seemed inevitable. In addition, he lacked the social and political leadership skills of a Chief Joseph of the Nez Perce and the multidimensional qualities (including the spiritual character) of a Sitting Bull, the great Lakota leader who served as the magnet attracting huge numbers of Plains Indians to him, a force that would secure the most famous resistance victory ever against the U.S. military - at Little Bighorn in 1876.

Geronimo was primarily a fighter, a lasting reputation that led American paratroopers in World War II to call out the name “Geronimo” before plunging from their planes. Schoolchildren, for decades after Geronimo’s death, would similarly yell his name before undertaking a real or imagined feat of bravery, such as leaping from a swing into a river. A much more recent, and highly controversial, use of Geronimo’s name was its employment by the U.S. military as a code name linked to the 2011 operation that resulted in the death of Osama bin Laden. 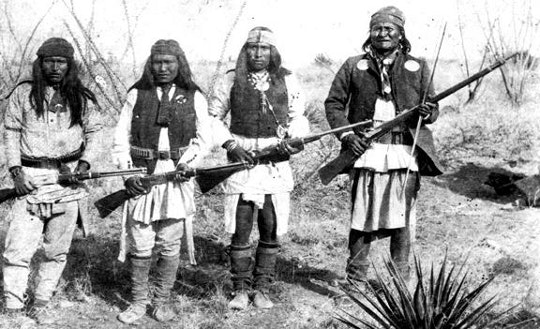 The association of Geronimo’s name with that of the hated terrorist elicited considerable resentment by a wide range of organizations and individuals, including the National Congress of American Indians, the Onondaga National Council of chiefs, Native American publications, Fort Sill Apache Tribal Chairman Jeff Houser, and Geronimo’s great-grandson Harlyn Geronimo. Their response was so intense that the Senate Committee on Indian Affairs took up the issue at a hearing previously scheduled to discuss use of Indian names and images as sports mascots and in other areas of popular culture. Defense Department officials argued that they had intended no disrespect to Geronimo and had named the total operation against bin Laden Operation Neptune Spear, further naming each step alphabetically. The “G” step involved the capture or killing of bin Laden and was coded with the Indian leader’s name, an explanation that did not do much to satisfy those who had raised objections to the use of Geronimo’s name.

So what led Geronimo onto the path that would lead from the battlefields of Mexico and the Southwest to a raid into Pakistan? Although it would be serious oversimplification to reduce all of Geronimo’s public life to one incident, certainly his life as a warrior was deeply influenced by a very personal event — an attack on an Apache camp by a Mexican general, José María Carrasco.

For years, Apaches had been both trading with and fighting Mexicans. As soon as he reached adulthood, at about the age of seventeen, Goyahkla, who was not yet known as Geronimo, was accepted as a warrior and entered into this dual relationship with Mexicans. About two years earlier, around 1844, Goyahkla’s father, Taklishim, had died of an illness, and Goyahkla assumed responsibility for his mother, Juana (Juanita). Geronimo’s autobiography - dictated to Stephen M. Barrett, superintendent of schools in Lawton, Oklahoma, with Asa Adklugie, a former student at the Carlisle Indian Industrial School, translating, and published in 1906 - shows a son deeply committed to his mother. 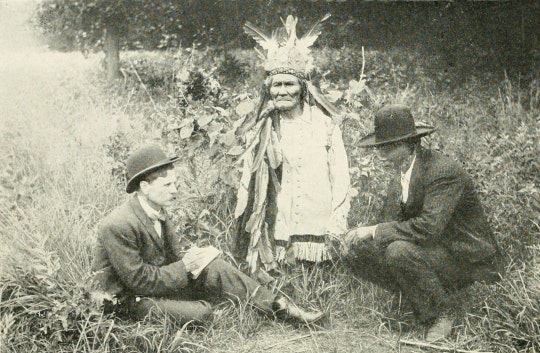 Shortly after becoming a warrior, Goyahkla married a young Nednai Apache, Alope, giving a herd of ponies — a substantial sum — to her father, Noposo, for the privilege of wedding her, the price, according to his autobiography, set so high because she was a good daughter and her father perhaps wanted to keep her with him. Goyahkla and Alope had been lovers for some time, and he records in the autobiography that his greatest joy upon arriving at adulthood was that he could marry her. Goyahkla took Alope to live near his mother. His bride decorated their tipi with beads and pictures drawn on buckskin. She was a good wife, he notes, and they were happy together with their three children.

When Goyahkla crossed into Mexico again around 1850 (Geronimo in his autobiography cites 1858 but is often off in his dating), he had no reason to suspect anything out of the usual. Traveling in a large group under Mangas Coloradas, the Apaches — including members of the Bedonkohe band to which Goyahkla belonged and the Nednai band, both subdivisions of the Chiricahua Apaches — passed through Sonora on their way to Casas Grandes. They camped at what is generally believed to be Janos (but referred to as Kaskiyeh in the autobiography), and many of the men went into town to trade. This went on for several days, each time a guard of men staying behind to protect the women, children, and supplies.

One afternoon, however, as the men were returning to camp, they met some women and children fleeing from Mexican troops who had attacked the camp, killing the guards as well as many of the women and children, destroying supplies, and stealing the Apaches’ ponies. When Goyahkla reached the camp, he discovered his wife, mother, and three children all dead. He tells in his autobiography of going off by himself and standing by a river. Geronimo, so many years after the event, does not say what he was feeling at that river, but his understated description clearly speaks powerfully to a great grief and sense of loss. 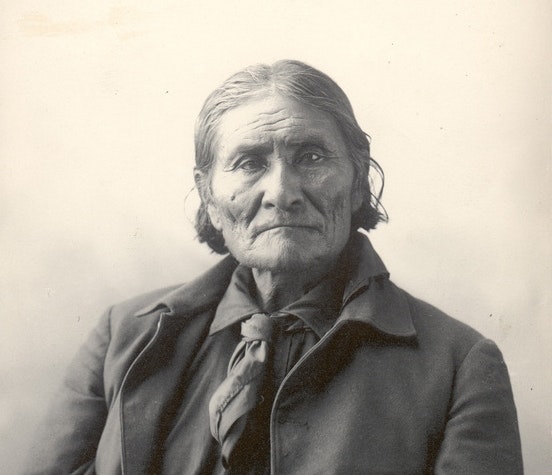 Without supplies and with most of their weapons and ponies lost, the survivors turned back toward Arizona. The elderly Geronimo recalls how he was unable to pray or devise any plan of action at the moment — devoid of purpose, he followed his comrades silently, staying by himself just within hearing of the now much smaller group.

Arriving at his home, Goyahkla gazed, certainly with great sorrow, at Alope’s decorations and their children’s toy before burning them, along with his tipi and his mother’s. Never again, Geronimo notes in his autobiography, would he feel content in his own home. Then, turning from his immediate grief, he vowed revenge on the Mexicans. A year later, Goyahkla returned to Mexico within a large war party and began to exact that revenge. It reportedly was during this excursion into Mexico that his enemies began calling him Geronimo, although no definitive explanation for the naming has ever been given. The name stuck, and Geronimo would continue his battles against Mexicans and, before long, settlers and soldiers of the United States who invaded his homeland, earning the warrior’s reputation that would stay with him throughout his life and into the twenty-first century, even into places that Geronimo could never have imagined, such as Pakistan. 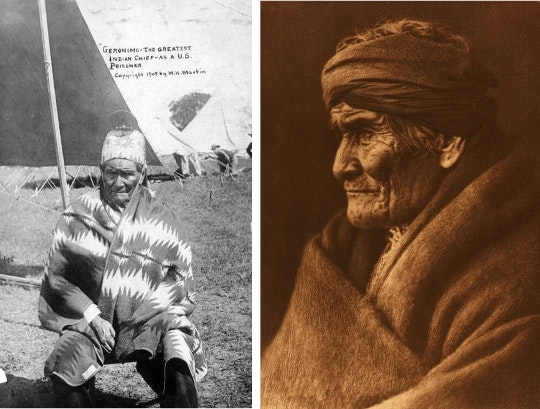 At first glance, Geronimo seems an unlikely candidate to compose his life story and be willing to share it with those whom he had been fighting for most of his adult life. There is a great desire, however, in many people, perhaps in most, to want to set the record straight and be understood and Geronimo seems to have been no different in this regard. He also expressed his hope that his story might persuade the government to allow him and other Apaches to return to their native Southwest to live. In addition, Geronimo saw his autobiography as a way to make money; during his late years as a prisoner, he had learned the power of money and had taken to selling photographs, buttons, and other souvenirs. Consequently, when Barrett raised the possibility of telling his story, Geronimo insisted that he be paid for doing so. Geronimo's occasional suspicions that Superintendent Barrett may have wanted his story in order to do him harm were softened by the presence of translator Asa Adklugie, who was a son of Juh (also spelled Whoa), a longtime Geronimo friend, ally, and cousin by marriage. Fully aware that he was hated by many and at the mercy of the government, Geronimo was politically astute as he narrated his exploits, focusing in detail on his battles with Mexicans but remaining generally reticent concerning encounters with the U.S. military.

Still, the autobiography probably would never have been published without the support of President Theodore Roosevelt. Barrett's request to write Geronimo's life was rejected by the military, but an appeal to the president brought the desired permission. Responding later to the complete manuscript, President Roosevelt again offered his support but with the suggestion that Barrett clarify that opinions expressed in the book were Geronimo's alone. Roosevelt was not hard to convince. Prior to Barrett¹s request, Roosevelt had himself made a request that Geronimo ride in his inaugural parade in March 1905, which the Apache leader did. Before leaving Washington, Geronimo met with the president and made a plea to be permitted to return to his homeland. Roosevelt listened compassionately but refused, explaining that he feared reprisals against the Apaches by area residents if they returned. When the autobiography was published in 1906, Geronimo, still trying, and apparently believing that the president might relent, dedicated his narrative to President Roosevelt.

Edward Rielly is a professor of English at Saint Joseph¹s College of Maine. He has published about two dozen books, including several volumes of his own poetry. His nonfiction works include Sitting Bull: A Biography (Greenwood, 2007) and Legends of American Indian Resistance (ABC-CLIO, 2011). The latter includes a chapter on Geronimo.