U.S. NATIONAL LIBRARY OF MEDICINE - Michael J. North, Head of Rare Books and Early Manuscripts in NLM's History of Medicine Division, takes a look at one of the most important books in the history of veterinary medicine - a seminal 17th-century work on the care of horses. 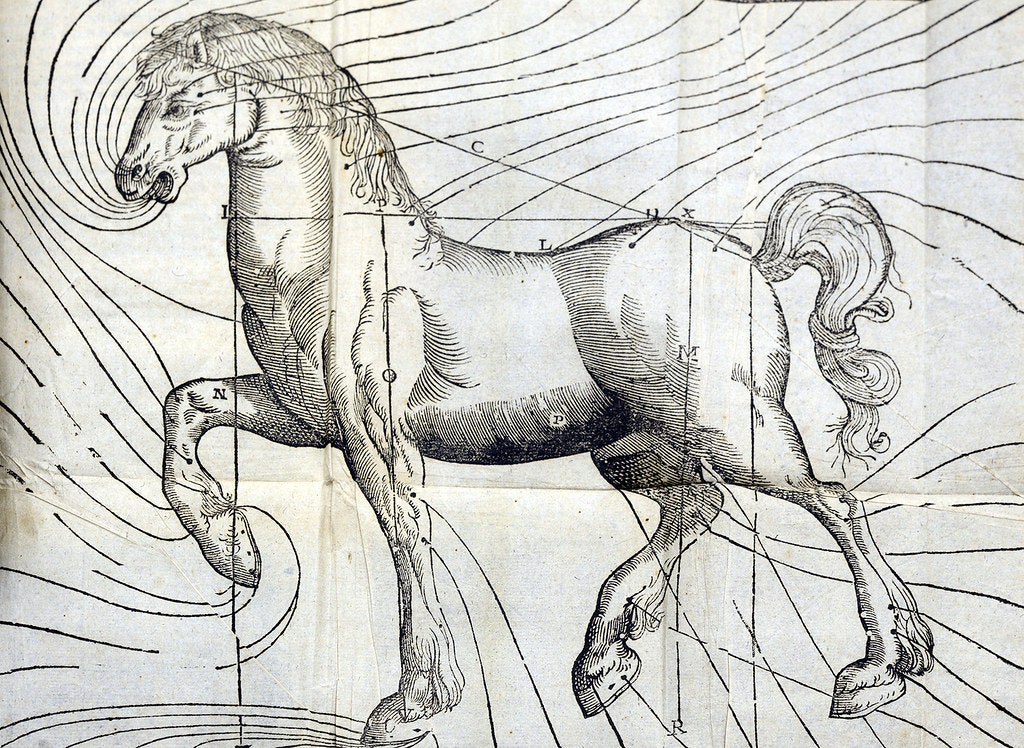 A foldout found in the 1644 edition of Markham’s Maister-peece [Masterpiece], Containing all Knowledge Belonging to Smith, Farrier, or Horse=Leech, Touching on Curing All Diseases in Horses.

One of the most important and enduring books in the English language about the care of horses is by Gervase Markham (1586?-1637), an author of poetry and practical guides, including books on horsemanship and home economics. His most famous work, however, was Markham’s Maister-peece [Masterpiece], Containing all Knowledge Belonging to Smith, Farrier, or Horse=Leech, Touching on Curing All Diseases in Horses, which was first printed in London in 1610 and came out in dozens of editions under a number of titles for over 200 years.

This edition of Markham’s Maister-peece printed in London in 1644 and held in NLM’s collection is divided into two parts focusing on “physical cures” and “surgical cures,” the former handling mainly internal physiology and pathology with herbal or dietary remedies, and the latter covering external illnesses which required hands-on treatments like bloodletting, purging, and bandaging. 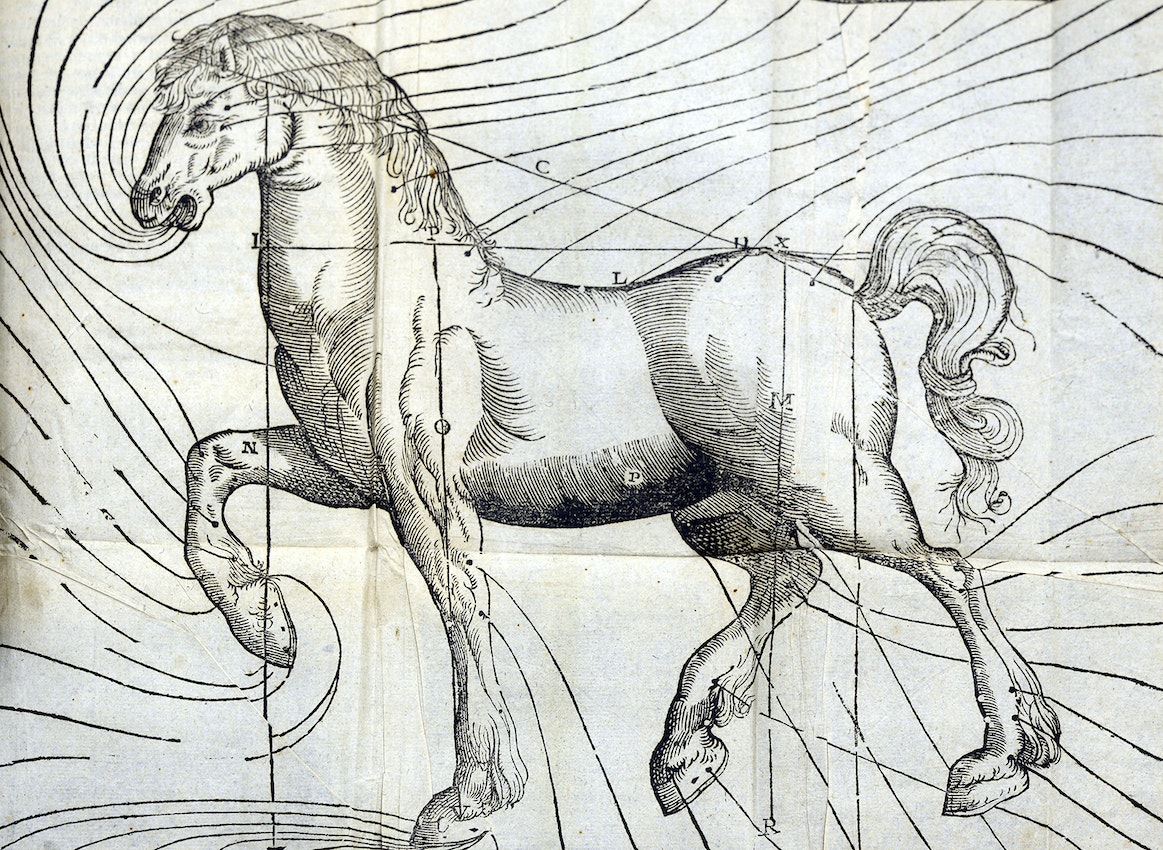 Title page from the 1644 edition of Markham's work in which the title is surrounded by nine images of people working with horses.

Markham’s work followed the prevailing philosophy about health and illness in this period for humans and other large animals: the humoral theory of disease and wellness, whereby the four humors of the body (blood, phlegm, bile, and black bile) needed to be kept in balance, and illness was a result of a lack of balance in these substances. These texts carry information about physiology and health of the horse that would be almost unrecognizable to us today. Maintenance of the fluid balance was important, as was diet; at different times of the year, maintenance was performed on people and animals such as horses in the form of bloodletting or feeding special foods that would hopefully bring the humors back into balance. For example, beginning on page 37 he tells his readers that: “…in bloud-letting, you must take but halfe so much from a young colt, as from an old horse … letting of blood is either to divert sicknesse and preserve health … not forgetting that April and October are the two principall seasons of the year for that purpose, except urgent occasion be ministred.”

By the mid-17th century, Markham’s treatise on horse care was considered authoritative by the public and was printed again and again in England for over two centuries, and eventually made its way to the British colonies as The Citizen and Countryman’s Experienced Farrier, printed in Wilmington, Delaware in 1764. This edition was nicely “Americanized” to cover special climatic conditions in the New World and included hints on the use of local plant remedies by “Discreet Indians.” The Library’s copy of this book contains numerous handwritten home remedies, a common practice at the time, including this one on page 145 for the botts, a loathsome condition caused by the larvae of the bot fly:

Cure for the Botts:
Take half-pint of vinegar
Half pint of soft soap
Half pint of gin
Half pint of molasses
Shake them together
Give it to the horse while foaming
In five minutes he will be free from pain
Certain Cure, Jan 21, 1846.

The Library has also digitized a later edition of the same book printed in Baltimore in 1797 which contains a handwritten home remedy for a child’s whooping cough written on the final blank page. 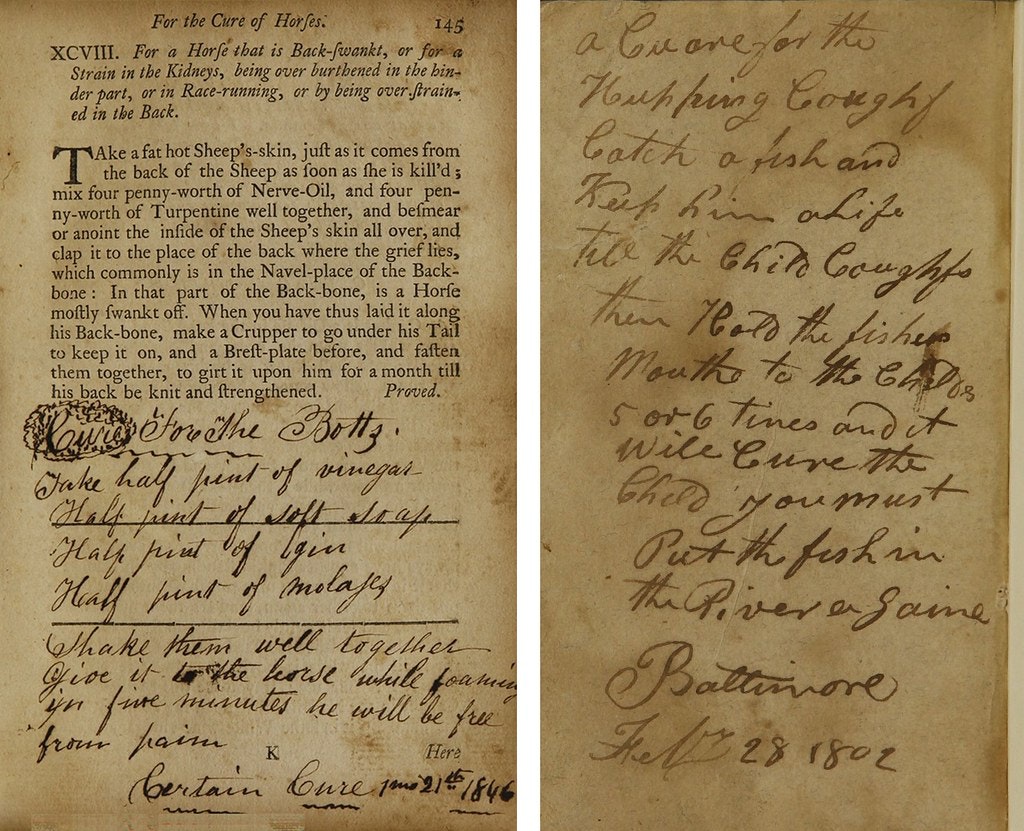 The National Library of Medicine’s collection includes an extensive array of veterinary literature dating from the 1480s to the 1850s. Most of the material in the collection deals with the horse, as did most veterinary literature dating before 1800, primarily because of its military and economic importance compared to other animals. Much of it is really quite stunning from a visual standpoint, with skilled illustrations of horses and treatments. The texts themselves are also fascinating, revealing a great deal about what sorts of people were healing animals and what they did to take care of them before more scientific veterinary research began in the 18th century.

Michael J. North is the Head of Rare Books and Early Manuscripts in the History of Medicine Division at the National Library of Medicine.