THE BRITISH LIBRARY - Sandra Tuppen explores some highlights from their digitised collection of music manuscripts, including those penned by the hand of Haydn, Handel, Purcell, and a very messy Beethoven. 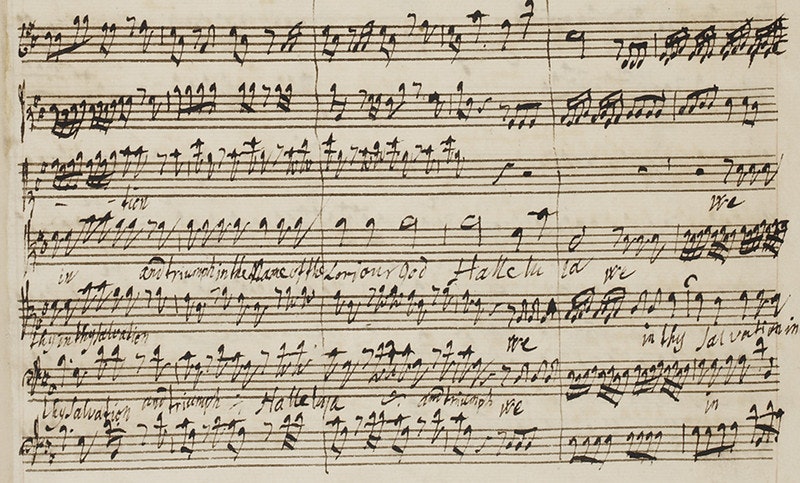 Ever since the earliest methods of notating music were devised, composers and scribes have written out music by hand – on vellum in the medieval period and subsequently on paper. (Only now is this beginning to change, with the advent of computer programs for music notation.) Even after the perfecting of music printing techniques in the 16th century, when music was printed using moveable type and later by engraving, and the burgeoning of a trade in music publishing, much music continued to be written out by hand and circulated in manuscript. Printing music was expensive, time-consuming and complex; copying out music by hand could be done relatively cheaply and quickly, especially when a few copies only of a particular composition were needed.

In the 17th and 18th centuries, music was written out in manuscript for several purposes. These included the creation of ‘master copies’ from which further handwritten copies could be made when required, the provision of musicians' parts for use in performance and the commercial and non-commercial dissemination of musical works. Many publishers of printed music also sold manuscript music. With musical genres for which the market in scores was likely to be small (opera, for example), producing manuscripts in small quantities was more cost-effective than setting up a print run.

The British Library holds one of the finest collections of printed and manuscript music in the world. It encompasses music dating from the middle ages to the present and includes a large number of autograph music manuscripts (scores written out by the composers themselves). Among the autographs are scores of the great composers of the 17th to the 19th centuries, from Purcell, Bach and Handel to Beethoven and Schubert, and large collections of scores and other documents of 20th-century British composers, including Elgar, Delius, Britten, Tippett and Maxwell Davies. 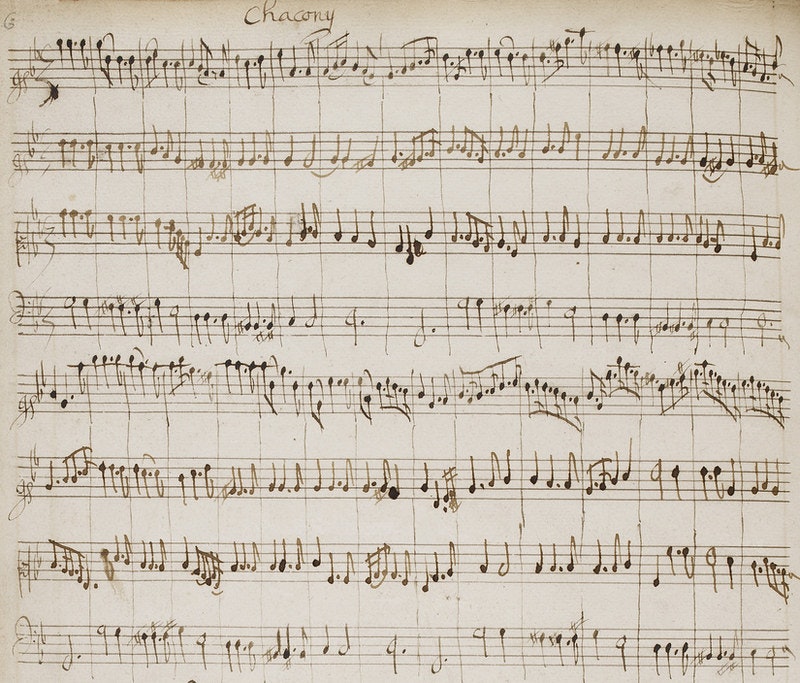 As is the case with ordinary handwriting, there is much that is distinctive about the way individual composers and scribes write music down, even though they all follow the same basic conventions for notating music. The ‘musical hand’ of an individual composer or scribe is often so distinctive that elements of it can be studied and, once identified as the 'fingerprint' of that particular individual, used to help authenticate other manuscript sources that are believed to have originated with the same individual. It can be used to identify anonymous pieces of music and correct earlier misattributions.

Manuscript music comes in a variety of formats, depending on its intended use. Autograph music manuscripts can provide a tantalising glimpse of the composer at work and shed light on the creative process. 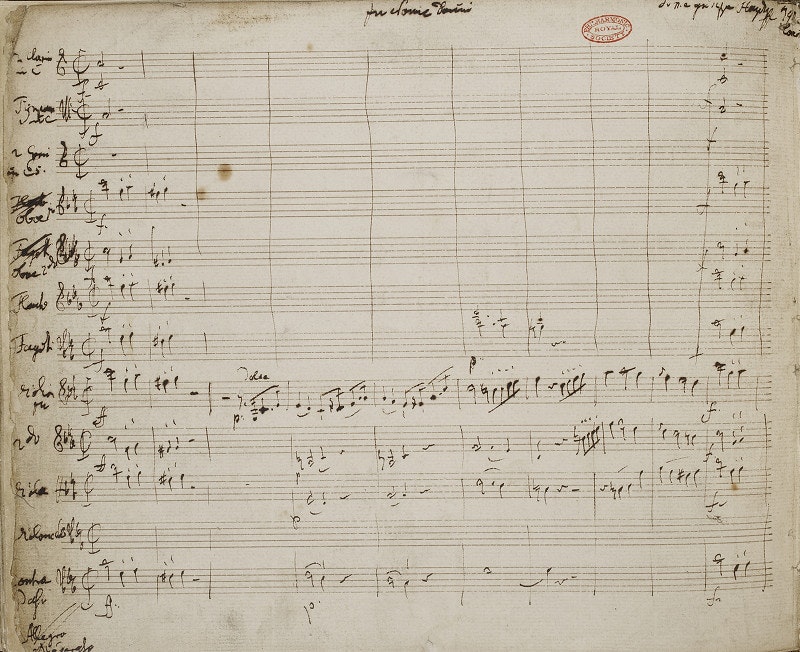 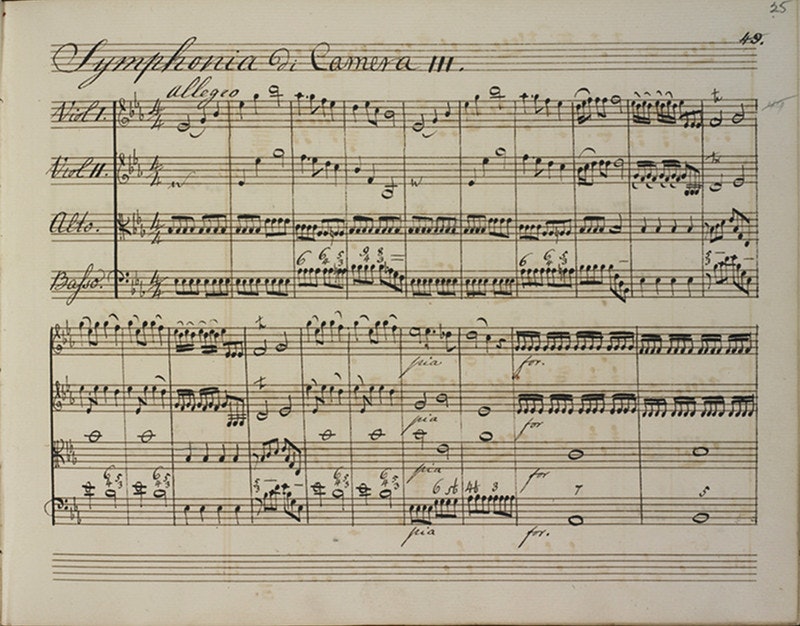 The two examples above – both from 18th-century symphonies – are 'fair copy' manuscripts, in other words they are manuscripts written out by the composers themselves, but in a final, 'tidy' version suitable for use by the scribe, who would have had to copy out the individual parts needed by each of the players.

Haydn probably completed his score shortly before the first performance of the symphony in 1791, in London. He made a mistake when writing the names of the instruments down the side, initially forgetting to include the oboes, but it is otherwise a model of clarity. The symphony of Sir William Herschel – astronomer and composer – is similarly clear, unlike the following example: 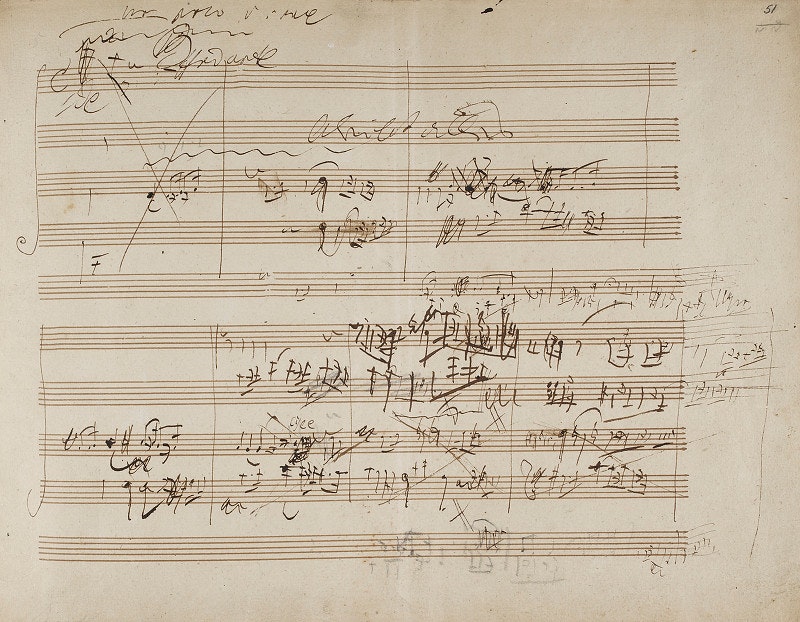 Here, Beethoven – never a neat writer at the best of times – was sketching out ideas for his string quartet in one of the notebooks he carried around with him. He jotted down his ideas whenever he had an inspiration.

Falling somewhere between Beethoven's rough sketch and Herschel and Haydn's fair copies in the creative process is the ‘working manuscript’, showing the composer still honing and finalising the work. In the following manuscript of music by Telemann, the composer has scratched out and altered some of the notes as well as removing one bar completely. 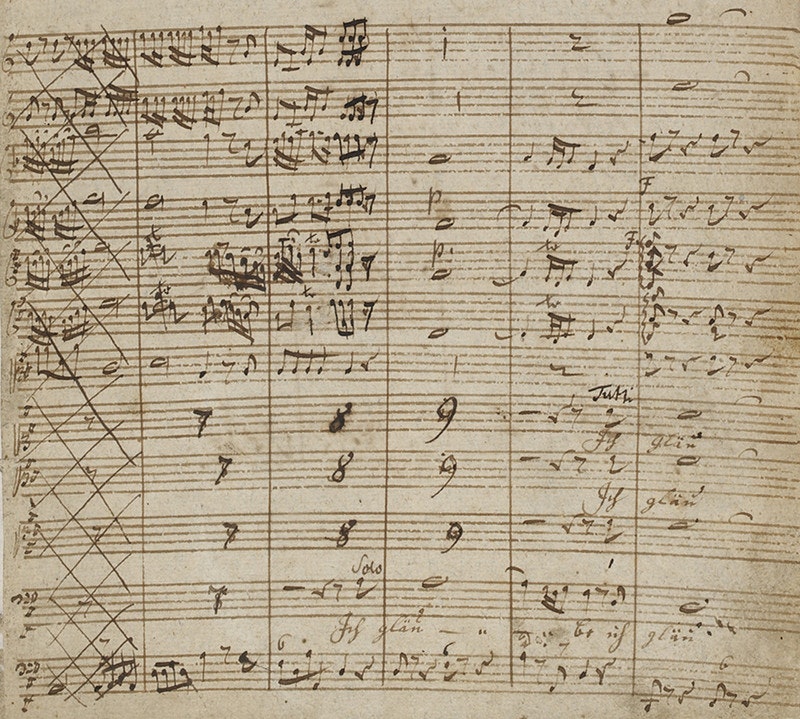 As well as its great collection of autograph manuscripts, the British Library holds many scribal (i.e. copyists') scores. Music copyists often worked closely with the composer, who would supervise their work, check it for errors and sometimes make corrections.

The music of Handel takes a central place in the British Library's collections, most notably in the Royal Music Library, the music collection of successive generations of the royal family, which was presented to the nation by Her Majesty the Queen in 1957. The collection includes 97 autograph manuscripts of Handel's music, together with many of the manuscripts compiled by Handel's trusted scribes. 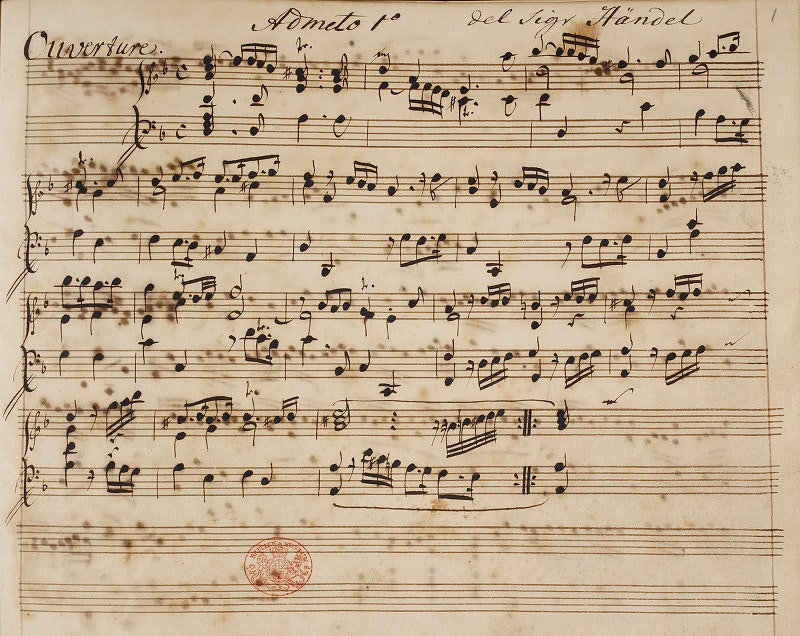 These scores are mostly 'file copies', rather than material that would have been used in performance. Much music, of course, is written out for very practical reasons – for use by professional or amateur musicians. Manuscript sources can not only reveal much about the music, but also provide evidence about the context in which it was heard.

This little oblong manuscript is just the kind of book that an amateur musician would have carried around in his pocket and pulled out to play from, perhaps at the request of his friends. In fact it belonged to and was compiled by a 17th-century coal merchant, Thomas Britton, who loved music and set up one of the first series of concerts in England, in a narrow room above his shop in Clerkenwell, lit, according to his neighbour, by a window 'no bigger than the bung-hole of a cask’. This music is intended for the recorder (known as the flute in the 17th century). 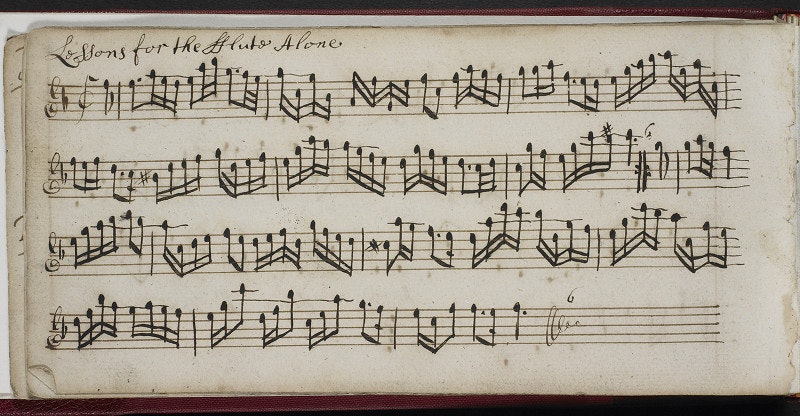 As is the case today, much music was intended for use by amateur musicians at home. Compilation albums – both printed and manuscript – containing the most popular pieces of the day were a feature in many middle- and upper-class households. This drinking song for three voices, 'Fill the bowle with Rosie Wine', composed and in the hand of the 17th-century musician Henry Bowman, appears in a miscellaneous album of pieces compiled by Bowman, and owned by Katherine Sedley, daughter of Sir Charles Sedley, Baronet. 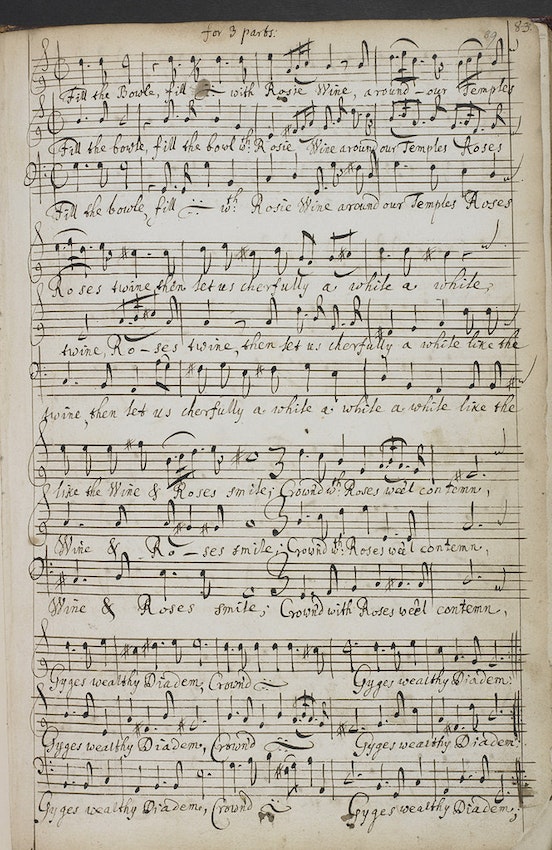 Music was also performed in educational establishments. Edward Lowe, Oxford Professor of Music from the 1660s to early 1680s, organised weekly performances at the Music School and collected and copied much music for use in Oxford, including this song by Henry Lawes, 'Come from the dungeon to the throne', sung in the play The Royal Slave by William Cartwright. Cartwright's play was performed by students of Christ Church, Oxford for Charles I in the 1630s. 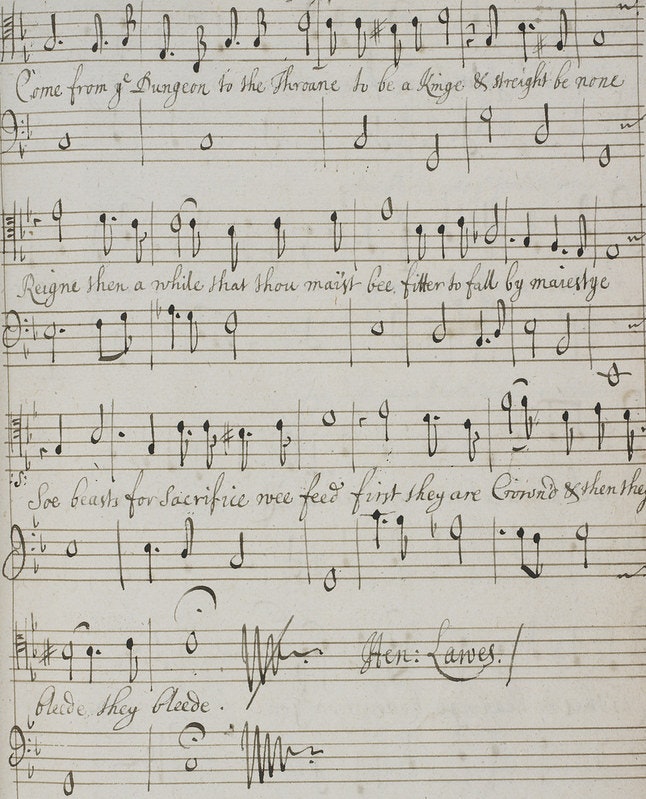 Much music was written for use in a liturgical setting, and the British Library's 17th- and 18th-century music collections are rich in scores of anthems, service music and other religious pieces, particular from the English sacred establishments. The following anthem by the all-but-forgotten James Nares sets words from Psalm 125 and comes from a manuscript of anthems composed by Nares for use in the Chapel Royal. He has annotated the score as follows:

The Words chose by Dr. Allen, Sub-Dean of his Majesty's Chapel Royal, desiring they might be set, in the Compass of five Minutes. 1757. Geo: 2d: desiring short Anthems, because he never sat during ye anthem, & began to be fategued with standing long as usual. 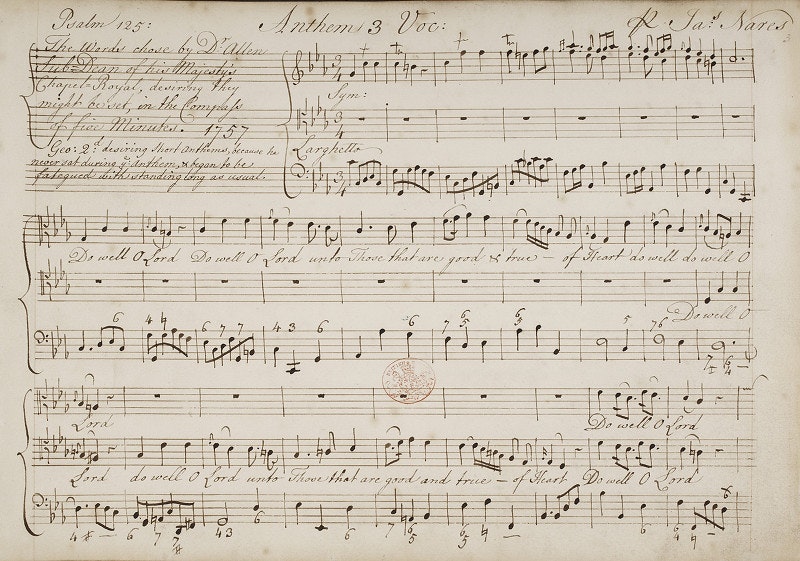 The other musical genre common in England in the 17th and 18th centuries was the 'occasional piece' – a composition written to mark a special occasion, such as a royal visit, birthday or saint's day. Many of these pieces took the form of an ode. John Eccles wrote such a work, 'Inspire us, genius of the day', in 1702-3, seemingly for William III's birthday. After the death of the King, it was re-purposed for the birthday of Queen Anne.

These images are just a small selection of those made for the RISM Music Manuscripts Project (www.rism.org.uk) - which aims to document all music manuscripts from 1600 to 1800 preserved in UK libraries and archives - and which are now made available on Wikimedia Commons. Along with the images are links to descriptions of each manuscript in the British Library catalogue and RISM database. While this gallery provides examples of a wide range of composers' and scribes' handwriting, these are single photographs, not complete manuscripts. The Library is now moving on to digitise entire music manuscripts, and you can find most of those that have been completed at www.bl.uk/manuscripts (just search for 'music'). We have also digitised about 320 of our 16th-century printed music sources, in a partnership with Royal Holloway, University of London, and these can be viewed at www.earlymusiconline.org. In the coming year, we will be working to digitise Handel's autograph manuscripts – a large undertaking – and will continue to make as much material as possible freely available.

I should like to acknowledge the assistance of Andrew Gray in making the 'Composers and Scribes' collection available on Wikimedia while he was working as Wikipedian in Residence at the British Library.

Dr. Sandra Tuppen is Curator of Music Manuscripts at the British Library.