Piracy at the Old Bailey

Ben Merriman presents a selection of piracy cases from the proceedings of London's Old Bailey. Although a few live up to the swashbuckling heists of stereotype, many reveal the surprisingly everyday nature of the maritime crimes brought before the court, including cases involving an argument over chickens and the stealing of a captain's hats. 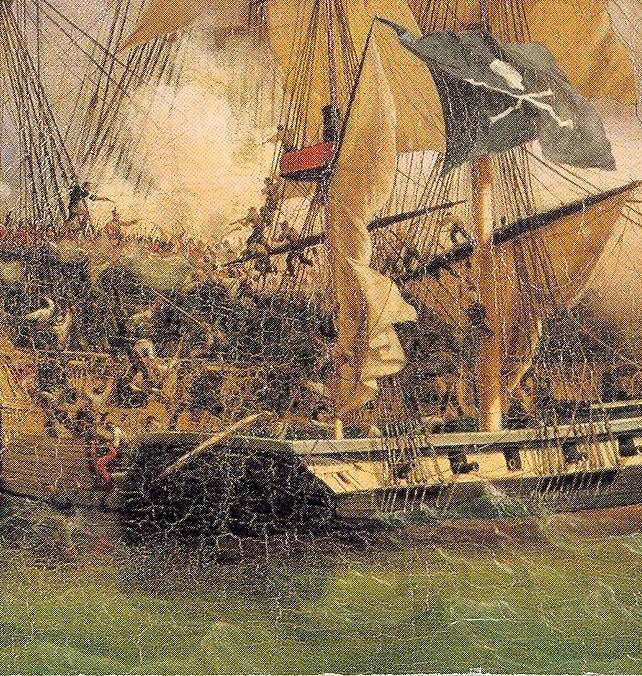 For centuries, the Old Bailey was the city of London’s main criminal court. Printed accounts of some 200,000 trials—the Proceedings—were published from 1674 to 1913. The Proceedings describe ordinary people in mostly ordinary legal trouble: three-fourths of the defendants were in the dock for theft, and on the whole the trials deal with mundane affairs. However, the Old Bailey also held jurisdiction over many cases of maritime piracy. These cases stand out from the many trials dealing with occurrences in and around London.

The Dove was at anchor off the port of Leghorn when EDWARD JOHNSON stabbed Captain Benjamin Hawes with a small blade, puncturing the Captain's heart. The Captain's apprentice, Walker, discovered Hawes dead in his cabin. He ran up to the deck to inform the first mate, only to find the mate and crew preparing to sail immediately, for they were all part of a plot to seize the ship. Walker jumped overboard and swam to a group of nearby vessels, whose crews stormed the Dove before it could sail away. The crew had conspired to make off with the ship because it belonged to Jews, from whom it was no sin to steal.

GEORGE GEERY took to the sea at an early age, and being a man of bad reputation, assumed the surname Wood, after a dead friend who was widely renowned for honesty. Geery, alias Wood, made sail on the Black Prince, which plundered ships throughout the Atlantic until it ran aground on Hispaniola during a storm. There the crew obtained false passports and sailed to Portugal, where Geery deserted with a confederate. He did not hang for his service on the Black Prince, but for a later transgression: illegally boarding the Derge Sustures and stealing several of the captain's hats. 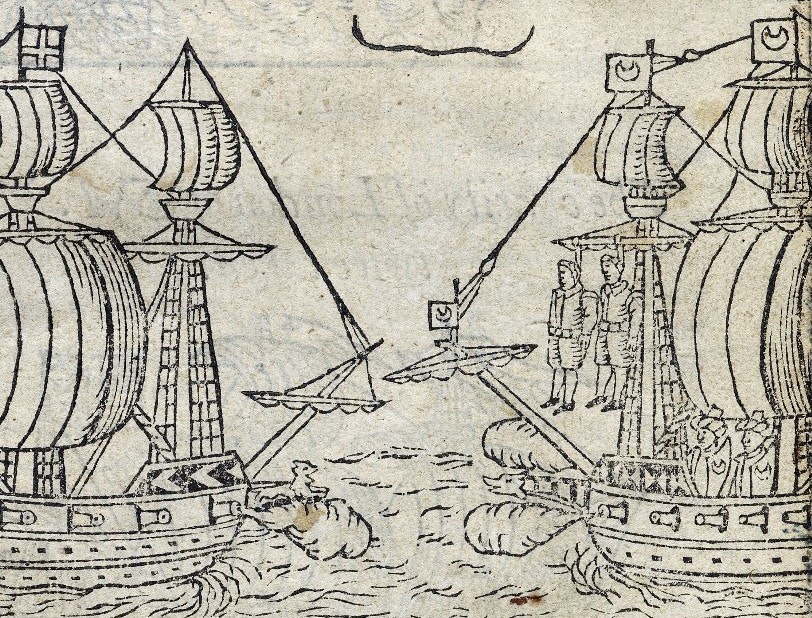 Detail from title-page of News from sea, of two notorious pyrats Ward the Englishman, and Danseker the Dutchman (1609) - Source: Folger Shakespeare Library (CC-BY-SA).

The steamship Lion sailed from London to the port of Harlingen, in the Netherlands. As the ship was preparing to return to England, Captain Henry William Neville saw a number of fowls being brought on board. On inquiring, Captain Neville learned that the fowls had been bought by first engineer JOHN JENNINGS SMITH, who planned to take them back to England at no charge. When the Captain informed Smith that he would need to pay the usual shipping rate for his fowls, Smith shouted to the rest of the crew to stop the fires and halt preparations to sail, which they did readily. Neither the first mate, the company shipping agent, a gentleman of the city of Harlingen, nor the British consul could prevail upon Smith and his eight co-conspirators to return to the ship, which returned to London three days later with a replacement crew. At trial, however, it came to the attention of the court that the first mate had not filed proper contracts before the Lion sailed; the nine were therefore not mariners in the eyes of the law, and were immediately acquitted.

The St. John Pink had left Padras laden with grain. Soon after setting out two of the apprentices heard a commotion in the night: Captain Benjamin Hartley was being attacked by his crew. After his blunderbuss misfired, RICHARD COYLE, a mariner, attempted to throw the Captain from the ship, but Hartley held to the lanyards. Coyle then beat the Captain, dangling from the side, with a small shovel, which proved ineffective. JOHN RICHARDSON, a carpenter, struck the Captain in the head with an axe, after which the Captain fell into the sea and died. The ship, now under the command of Coyle, sailed for Malta, but did not land, for the apprentices would not agree to unite under the mutineers. Later the St. John Pink neared Foviano, where Coyle, wearing the dead Captain's uniform, sought to buy liquor. Nobody would sell. That night the apprentices, who had been imprisoned below, escaped. They took a boat ashore to alert the local authorities. Coyle fled the St. John Pink in a long boat, but was apprehended in Tunisia. At trial he produced witnesses to attest to his character, but one scarcely remembered him, and the other recalled that Coyle had once drilled holes through the side of a ship.

The Jane lay off the coast of Mexico when WILLIAM McCLIVE and LEVI THOMAS stole one of the boats, and with it a good deal of clothing, a silver watch, and other items. Though they did not dispute that they had taken the boat, they noted, by way of mitigation, that they had been very drunk at the time. 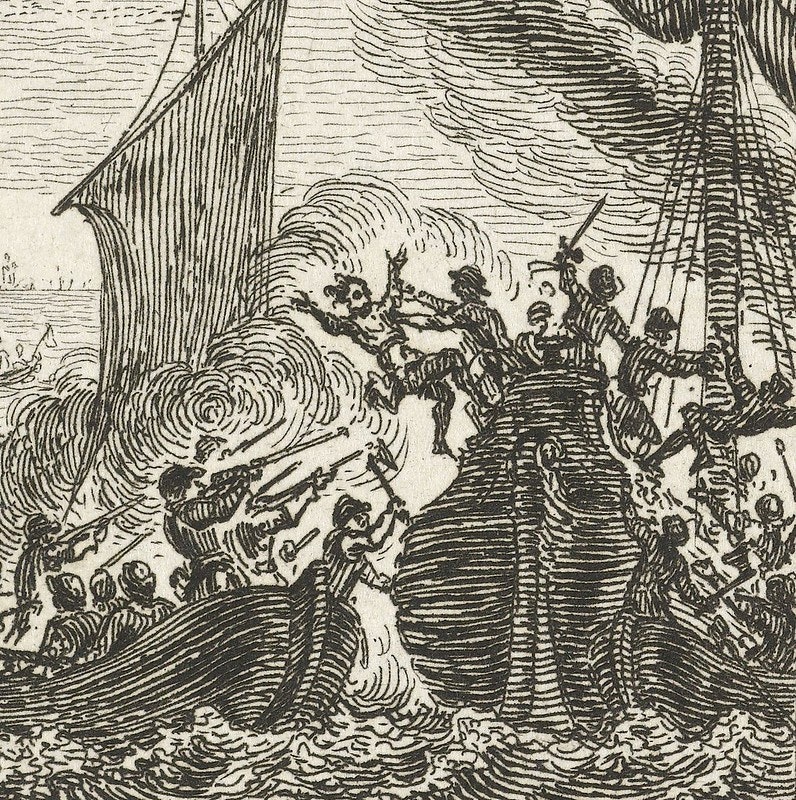 The Experiment, a fishing smack, began to leak and was forced to make port at Scarborough, where it was caulked and refloated. ISAAC COOPER, commanding the ship in the owner's stead, then landed the ship at New Dieppe and sold off its equipment, along with all of the fish that had been caught on the journey. He kept this money for himself. Cooper continued to sail about until the Experiment was overtaken by a steamship some weeks later. The crew of the larger ship seized the Experiment and its officers, and took them all home.

Captain WILLIAM LAWRENCE wanted money. After being discharged from the Royal Navy with only a fraction of the wages owed to him, he fitted out the Lark as a privateer and assumed command. However, his crew could never apprehend valid prizes, only neutral Swedish and Dutch ships. Finally becoming frustrated, the Lark attacked and boarded the Enighadt, a Dutch ship sailing for London. Lawrence, with two other officers, stole textiles worth 1,000 pounds, as well as the personal wealth of the passengers. Though Lawrence disputed certain particulars, he admitted that he was a pirate and deserved to die.

JOHN MACKAREL was indicted for river piracy, but on the appointed day of his trial the prosecutor failed to appear in court. The charges were dismissed.

The naturalized Maltese JOHN TUNE was the Captain of the privateer Young Eagle, which illegally took a neutral ship, the Guilaume, as it sailed for Bilbao. For two years a woman, presenting herself as his wife, visited him while he awaited trial and execution, but it was at last revealed that his legal wife had died from the shock of his indictment; his visitor was, very likely, a prostitute. The Ordinary of Newgate Prison noted that Tune was a great complainer, and, the Ordinary suspected, a secret Catholic. 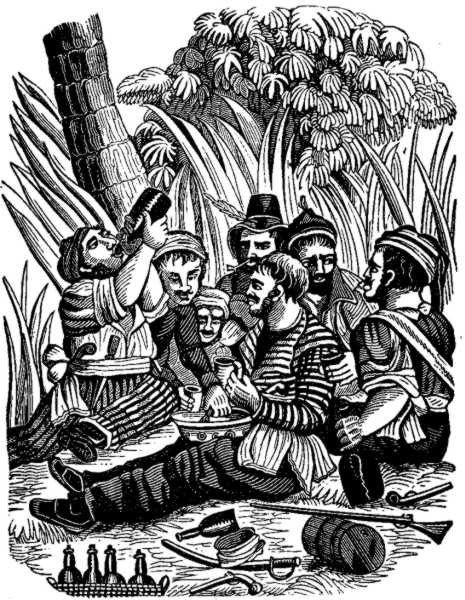 Ben Merriman is a doctoral candidate in Department of Sociology at the University of Chicago and fiction editor at Chicago Review. Ben's essays have appeared in n+1, Threepenny Review, Democracy, the Chronicle of Higher Education, and many other magazines.