Nadja Durbach questions the extent to which Joseph Merrick, known as the Elephant Man, was exploited during his time in a Victorian 'freakshow', and asks if it wasn't perhaps the medical establishment, often seen as his saviour, who really took advantage of Merrick and his condition. 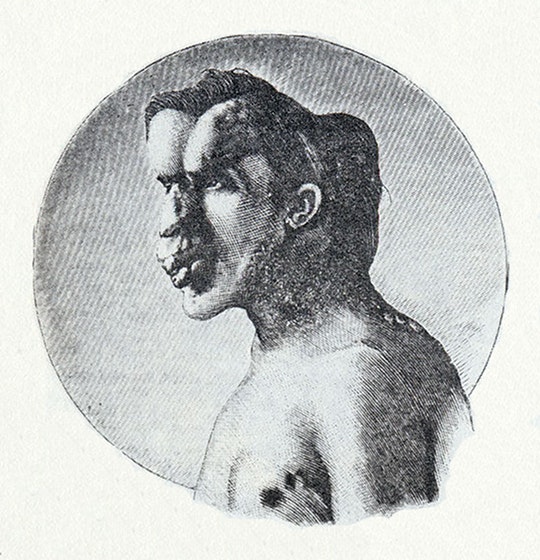 The scenes are among the most heartless in cinema history: a drunken, abusive showman exhibiting the severely deformed Joseph Merrick to horrified punters. David Lynch's The Elephant Man begins with its lead character being treated little better than an animal in a cage. But it soon finds a clean-cut hero in the ambitious young surgeon Frederick Treves, who rescues the hapless Merrick from his keeper and gives him permanent shelter at the London Hospital. Supported by charitable donations, the victim recovers his humanity: he learns to speak again (in a decidedly middle-class accent), to entertain society guests and to dress and behave like a well-heeled young dandy. Merrick, no more the degraded show freak, reveals his inner goodness and spirituality and dies happy.

Lynch's movie is based largely on Treves' sentimental chronicle. But that narrative is merely one version of events - and one that in the end tells us more about middle-class morality than it does about Merrick. There is another story that casts a different light on what happened. The memoirs of Tom Norman, Merrick's London manager, are surely as biased as Treves'. But as one of the most respected showmen of his day, Norman's account challenges head on Treves' claim that Merrick was ultimately better off in the hospital than at the freakshow.

In August 1884, after checking himself out of the Leicester workhouse, Merrick began his career as "the Elephant Man". The exhibition of human oddities had been part of English entertainment since at least the Elizabethan period. In the 1880s, alongside the Elephant Man, the British public could see Jo-Jo the Dog-Faced Boy, American Jack the Frog Man, Krao the Missing Link, Herr Unthan the Armless Wonder and any number of giants, dwarfs, bearded women and other "freaks of nature". Despite the freakshow's popularity, by the end of the 19th century, middle-class morality was condemning it as immoral, indecent and exploitive. 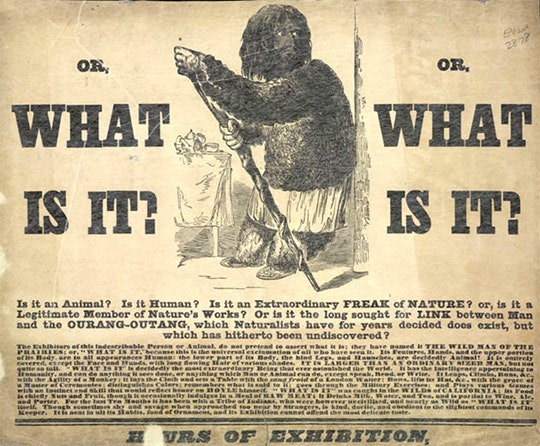 An example of a Victorian 'freakshow' exhibition: poster for 'What is it?', an act shown at The Royal Surrey Zoological Gardens, c.1846 - Source (NB: from the British Library, not openly licensed)

Most Victorian freaks, however, actually earned a comfortable living. Many were free agents who negotiated the terms of their exhibition and could ask for a salary or a share of the profits. They sold souvenirs to the crowds to make extra money. The freakshow was thus an important economic resource for working people whose deformities prevented them undertaking other forms of labour. Indeed, freak performers did not consider their exhibitions to be obscene or degrading. Rather, they saw themselves as little different from other entertainers.

Merrick suffered grievously from a rare disfiguring disease. His limbs were severely enlarged, and his massive head sprouted a large bony lump. His skin was loose and hung in sack-like masses from his back. A small "trunk" that had been cut away from his upper lip was beginning to grow back. He was, recalled Treves, "the most disgusting specimen of humanity that I have ever seen". But at the age of 22, Merrick's decision to exhibit himself as the Elephant Man was a rational financial choice.

During the two years he was on display in Europe, he was able to save more than £50 - a sizeable sum for a working-class man. In fact, Merrick earned more from his exhibition than his manager. They shared the take evenly, but Norman paid for the rent of the venue, food and lodging. 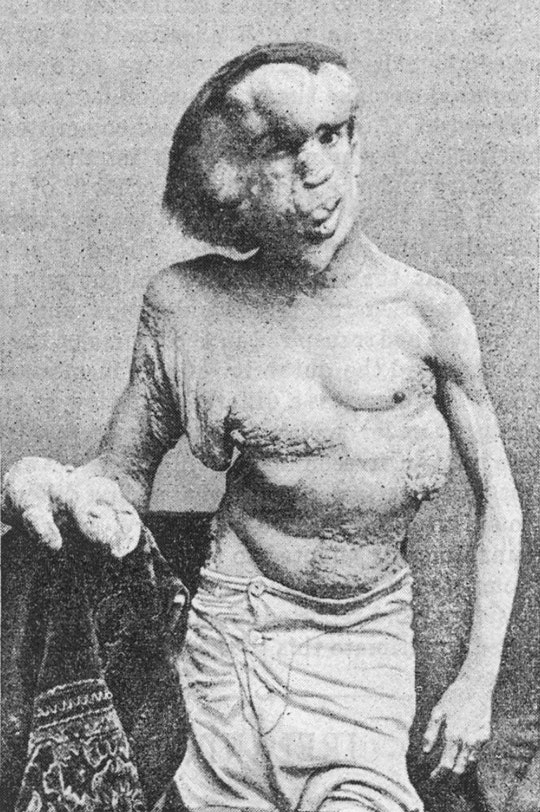 A photograph of Joseph Merrick, taken in 1889 and published in the British Medical Journal with the announcement of Merrick's death ("Death of the 'Elephant Man'", Vol. 1, No. 1529) - Source

According to his manager, Merrick was happy with his life as a show freak, and of the workhouse he had quit, he declared: "I don't ever want to go back to that place."

This was no surprise. The Victorian workhouse was the place of last resort. Poor food, squalid living conditions and the penal atmosphere were all intended to discourage the poor from being a burden on the state. Indeed, most working-class people sought desperately to avoid the physical hardships and social stigma of the workhouse. Norman recalled that Merrick "was a man of very strong character and beliefs - anxious to earn his own living and be independent of charity". He refused to pass a hat around at the end of the show to collect extra, insisting that "we are not beggars are we, Thomas?" The freakshow provided Merrick with a way to earn a decent living in a manner he found less degrading than relying on poor relief.

When the Elephant Man's show was shut by the police in December 1884, Merrick left for a continental tour. But two years later, he returned to the East End of London destitute, having been robbed of his savings by an unscrupulous showman. Treves had exhibited the Elephant Man to the Pathological Society in 1884 as a puzzling medical specimen and had given him his business card. When Merrick produced the card on arrival at Liverpool Street station, the police summoned the surgeon to intervene on his behalf. Motivated by scientific curiosity and compassion, Treves admitted Merrick to the London Hospital. He raised funds for his upkeep through a campaign in The Times to prevent what he considered the immorality of the Elephant Man's public exhibition. 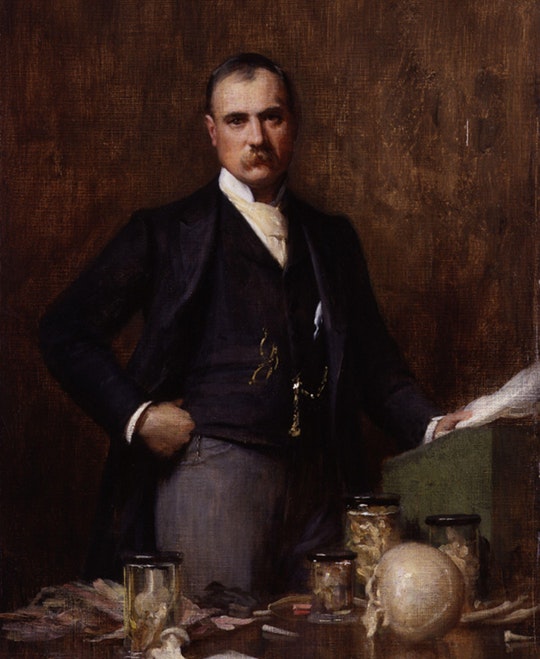 In the hospital, Merrick was kept largely confined to his rooms. When he ventured too far outside them, he was quickly shepherded back, lest he frighten other patients. Treves said his intention in providing for Merrick was to save him from the humiliation of public exhibition. However, his charge was constantly visited by curious members of high society. Like the masses who attended freakshows, they came out of a prurient fascination with Merrick's grotesque body rather than merely to "cheer his confined existence". Indeed, as a patient with a rare disorder, he piqued the curiosity of a variety of medical practitioners and was frequently on display. According to Norman, Merrick was "constantly seen and examined" by a "never-ending stream of surgeons, doctors and Dr Treeve's (sic) friends".

The Elephant Man's hospitalisation sprang from a benevolent desire to help this "poor fellow". But, for Merrick, it may have been little different from entering the workhouse. As a permanent resident, supported entirely by charitable donations, he was rendered a dependent member of "the deserving poor". Norman argued that Merrick's "only wish was to be free and independent". This could not happen while he remained an inmate of the hospital where, his former manager argued, he must have felt as if "he were a prisoner and living on charity". Treves maintained that Merrick was "happy every hour of the day". But Norman's son unearthed the testimony of a hospital porter who claimed that Merrick asked more than once: "Why can't I go back to Mr Norman?" 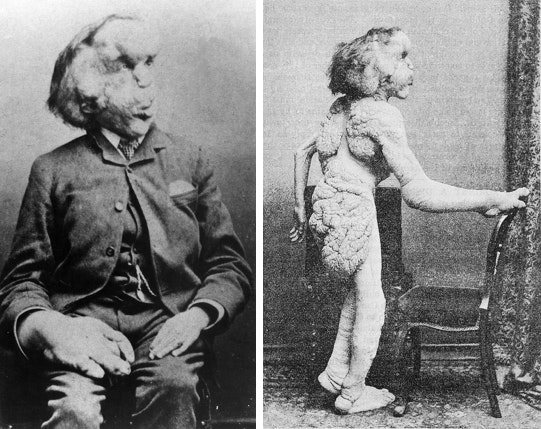 Left: An 1899 carte de visite of Joseph Merrick circulated to members of the public - Source. Right: A photograph of Joseph Merrick, taken in 1889 and published in the British Medical Journal with the announcement of Merrick's death ("Death of the 'Elephant Man'", Vol. 1, No. 1529) - Source

Merrick never returned to the show world. Instead, he lived out his days in renovated basement rooms at the London Hospital, where he was found dead, lying across his bed, at 3:30pm on April 11 1890. Although no foul play was suspected, the coroner felt it prudent to hold an inquest. He concluded that Merrick had died of natural causes - that the weight of his head overcame him during sleep and caused suffocation. Treves supported this interpretation. He argued that Merrick's death resulted from his "pathetic but hopeless desire" to sleep "like other people". Norman, however, had a different interpretation of Merrick's death. He believed the Elephant Man had taken his own life.

Suicide does seem a much more plausible explanation. Merrick was found dead in the middle of the afternoon, and thus not during a natural sleep. He was lying in a position that he knew would cause asphyxiation.

The Elephant Man's skeleton remains on display in the London Medical College's pathological museum, a fate he clearly expected. According to one of Treves' medical students, he "used to talk freely of how he would look in a huge bottle of alcohol". Norman also continued to exhibit Merrick's "body" after his death, displaying a bust of the Elephant Man in his waxworks. But when he sold the exhibit after the first world war, he kept hold of the bust and stored it away in a packing case. Merrick continued to be exhibited, therefore, in both of the venues that had made him famous.

Ironically, it was the sideshow, rather than the scientific institution, that finally laid the Elephant Man's body and memory to rest.

Nadja Durbach was born in the United Kingdom and grew up in Canada. She completed her BA (Hons.) in 1993 at the University of British Columbia and her PhD at Johns Hopkins University in 2000. She is currently Professor of History at the University of Utah. She is the author of two books: Bodily Matters: The Anti-Vaccination Movement in England, 1853–1907 and Spectacle of Deformity: Freak Shows and Modern British Culture. She is currently working on a book about the politics of food in Modern Britain.