Last year saw the works of Virginia Woolf enter the public domain in many countries around the world. To celebrate Emma Sutton looks at Woolf's short story "A Simple Melody" and the influence which music had upon the writer who once wrote that music was "nearest to truth". 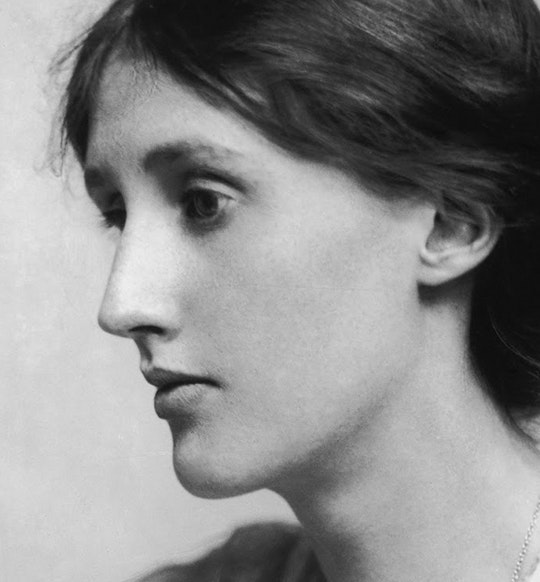 Detail from a photograph of Virginia Woolf taken in 1902 by George Charles Beresford - Source.

As Virginia Woolf’s letters and diaries amply record, music was a central part of her social life as it was for many of her contemporaries and she was at her best as a humorist writing about these occasions. She records with glee the various mishaps that befall musicians and audiences – a prima donna throwing down her music in a rage; a button popping off the plump Clive Bell’s waistcoat during the slow movement of a piano sonata; an elderly man crashing loudly but astonishingly unhurt down the stairs at Covent Garden. The social conventions, artifice and pretensions governing these performances intrigue her and allow her to sharpen her wit, but music wasn’t only an occasion for slapstick humour or social satire. It played a central part in the political vision of Woolf’s writing, shaping her understanding and representations of feminism and sexuality, pacifism and cosmopolitanism, social class and anti-Semitism. And it informed, too, the formal experiments of her prose. Woolf learned many of her astonishing literary innovations from music – adopting from Wagner’s operas, for example, the technique of shifting from one narrative perspective to another in order to represent the unspoken thoughts and feelings of her characters.

The short story ‘A Simple Melody’ (c.1925) encapsulates her acute interest in music and its resonant but discreet place in her work. In it, the principal character masks his discomfort at a formal party by studying a landscape painting hanging on the wall:

Mr Carslake, at least, thought it very beautiful because, as he stood in the corner where he could see it, it had the power to compose and tranquillize his mind. It seemed to him to bring the rest of his emotions – and how scattered and jumbled they were at a party like this! – into proportion. It was as if a fiddler were playing a perfectly quiet old English song while people gambled and tumbled and swore, picked pockets, rescued the drowning, and did astonishing – but quite unnecessary – feats of skill. He was unable to perform himself.

The difficulties of communication and the importance of the unspoken are central themes of Woolf’s brief sketch. This is a story about language, about communication. The inhibitions restricting the conversation among the party’s guests, and the difficulty of finding ‘pure new words’ in which to express his feelings, frustrate Mr Carslake. As he looks at the painting of a heath Mr Carslake imagines walking on it with a variety of companions, longing for the intimacy and social equality that he sees as characteristic of al fresco conversation in contrast to polite small talk:

Why, very likely they would talk about their own habits for a whole hour; and all in the freest, easiest way, so that suppose he, or Mabel Waring, or Stuart […] wanted to explain Einstein, or make a statement – something quite private perhaps – (he had known it happen) – it would come quite natural.

His association of the landscape with song suggests that music, like these imagined outdoor exchanges, represents a more direct or ideal form of communication than language, an idea that Woolf’s writing repeatedly explores. She was fascinated by, but wary of, the idea that music was a form of total expression, a model that writing could aspire to or imitate. Here, Mr Carslake’s comparison of the painting to an ‘old English song’ celebrates music’s expressivity and capacity to confer order on its listeners, but also evokes the extensive contemporary nationalist writing about English folk song, landscape and early music by the composers and teachers of the English Musical Renaissance. Mr Carslake remarks that he has recently attended the British Empire Exhibition at Wembley, at which English folk songs and military marches were performed: he found it ‘very tiring’ and ‘believed it was not being a success’. These bathetic details undercut nationalist and military music, suggesting that he, like Woolf herself, was repelled by it. Yet Mr Carslake's belief that music confers ‘proportion’ on the listener echoes the catchphrase used by the unfeeling doctors treating shell-shocked war veterans in her contemporary novel Mrs Dalloway, using music to suggest a more troubling aspect to his fantasies about communication: his ‘desire […] to be sure that all people were the same’ and ‘very simple underneath’ is both crudely reductive, as he partly recognises, and indicative of empathy and a wish for real connection with others. 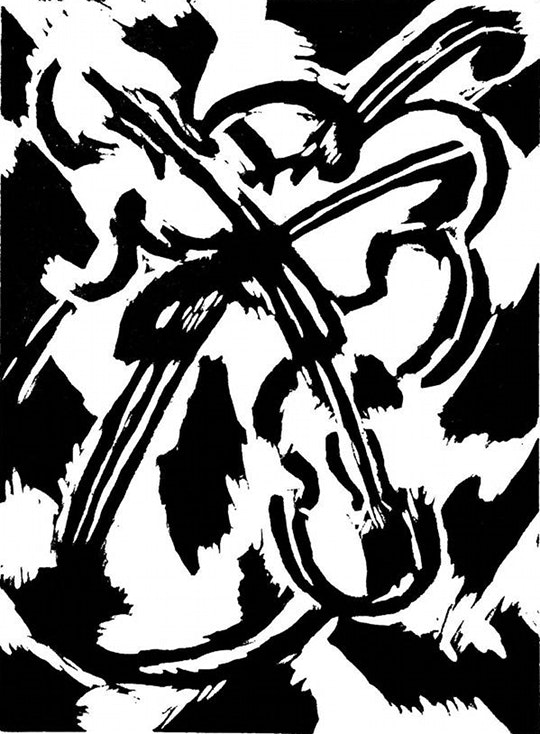 A woodcut by Woolf's sister Vanessa Bell to illustrate the short story 'A String Quartet' in the Hogarth Press 1921 edition of the Monday or Tuesday collection - Source.

The allusion to music also allows Woolf to flesh out aspects of her character’s inner life that could not be addressed directly: the story draws on music’s contemporary association with homosexuality, which is further implied through the description of Mr Carslake as a ‘queer fish’ whose ‘affections’ for his butler are the subject of speculation by his friends. These details hint at a more unconventional and warmer private life than is apparent through his conversation at the party – or through his slightly sinister wish for human homogeneity and simplicity. Similar uses of music pepper Woolf’s fiction: in her first novel, The Voyage Out, her heroine plays a Beethoven piano sonata usually perceived as ‘unattainable’ for women, augmenting the references to her growing feminism. In Night and Day, references to Mozart’s operas criticise the power of patriarchal society and in Jacob’s Room a performance of Tristan contributes to the numerous allusions attacking the war mongering of Edwardian society and its imperial activities. In The Years, Woolf’s account of a performance of Wagner’s Siegfried resists the composer’s notorious anti-Semitism, using the opera to embed more sympathetic attitudes towards Jews in the novel.

In a famous letter of 1940, Woolf wrote that ‘I always think of my books as music before I write them’; recent criticism has started to explore the implications of the relationship between music and writing in her work. And although music has often been seen as the art in which Bloomsbury was least interested, Vanessa Bell’s work as a set designer for ballets, Bell’s painting (with Duncan Grant) of a music room for the Lefevre Gallery in London, and the central place of musical terms in Roger Fry’s art criticism all illustrate music’s importance to Woolf’s family and friends. Woolf shared a passionate interest in ‘intermediality’ with the Modernists, including T.S. Eliot, James Joyce, Gertrude Stein and Katherine Mansfield, too. She spoke, then, for many of her contemporaries when she wrote in a letter of 1899 that music, rather than literature, seemed to her the ‘nearest to truth’.

Emma Sutton is Senior Lecturer in English at the University of St Andrews. She has published and broadcast widely on music, fine art and literature and her books include Aubrey Beardsley and British Wagnerism in the 1890s (2002), Opera and the Novel (with Michael Downes, 2012) and Virginia Woolf and Classical Music (2013). She is editing Woolf’s first novel, The Voyage Out, for Cambridge University Press and writing a book on Leonard Woolf.