Sir Arthur and the Fairies

In the spring of 1920, at the beginning of a growing fascination with spiritualism brought on by the death of his son and brother in WWI, Arthur Conan Doyle took up the case of the Cottingley Fairies. Mary Losure explores how the creator of Sherlock Holmes became convinced that the 'fairy photographs' taken by two girls from Yorkshire were real. 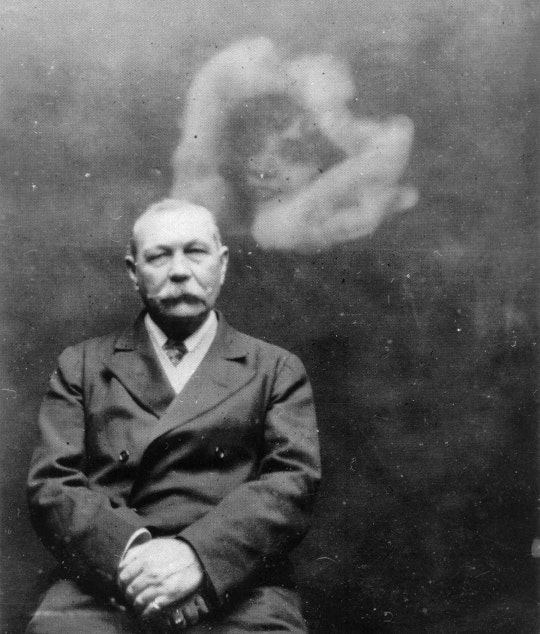 In the winter of 1920, readers of the popular British magazine the Strand found a curious headline on the cover of their Christmas issues. “FAIRIES PHOTOGRAPHED,” it said. “AN EPOCH-MAKING EVENT DESCRIBED BY A. CONAN DOYLE.” The Strand’s readership was well acquainted with Sir Arthur Conan Doyle; most of his wildly popular Sherlock Holmes stories had appeared for the first time in its pages. The great man’s claim that fairies –real fairies – had been photographed in the north of England by two young girls was greeted with wonder, but unfortunately for Conan Doyle, most of it was of the “what can he be thinking?” variety. How could the creator of the world’s most famous, least-fool-able detective have convinced himself that “fairy” photographs were real? Let us proceed, Holmes-like, to examine the question.

Mistake Number One: Misinterpreting the Evidence

To his credit, Conan Doyle made what was (to him) a thorough, scientific, step- by- step investigation of the “fairy” photographs. For his first step, he consulted experts at the London offices of the George Eastman Kodak Company. They examined prints of the first two “fairy” photos and told Conan Doyle they could find no evidence of photo-doctoring; still, they insisted someone who knew enough about photography could have faked them.

In Conan Doyle’s mind, that ruled out the two Yorkshire village girls who had taken the photographs, Elsie Wright and Frances Griffiths. “I argued that we had certainly traced the pictures to two children of the artisan [working] class, and that such tricks would be entirely beyond them,” he wrote. Working class girls, surely, would not be able pull off such a hoax….

Mistake Number Two: Our Man Not on the Spot

Conan Doyle’s next step was an on-the-scene investigation – but Conan Doyle himself did not go. Instead, he enlisted a far-from-impartial surrogate -- an ardent believer in fairies named Edward Gardner -- to carry out the mission. Gardner had already talked to several people who had assured him the girls had played with fairies and elves since babyhood. He had already written to Elsie Wright’s mother begging her to get her “little girl” to take more photos. “I know quite well that fairies exist,” Gardner wrote in one of several letters to Elsie’s mother, “and that they are very shy of showing themselves or approaching adults, and it is only when one can obtain the help of their ‘friends’ that one can hope to obtain photographs and hence lead to a better understanding of Nature’s ways than is possible otherwise.” Gardner explained to Elsie’s mother that he had long been anxious to obtain photos of “fairies, pixies, and elves, and if possible of brownies and goblins.”

So it is perhaps not surprising that when he actually visited the Wright family in the Yorkshire village of Cottingley, Gardner found no reason to suspect there was anything amiss in the photographs. He talked to Elsie’s parents, who (not knowing themselves whether or how the photos had been faked) gave him sincere and honest answers. They told Gardner all they knew: that the two girls had borrowed Elsie’s father’s camera and gone down to a little hidden valley behind the house where the younger girl, Elsie’s cousin Frances, believed she saw fairies. The girls had returned a just short time later with the negative that Elsie’s father developed in his home darkroom: the first fairy photo. 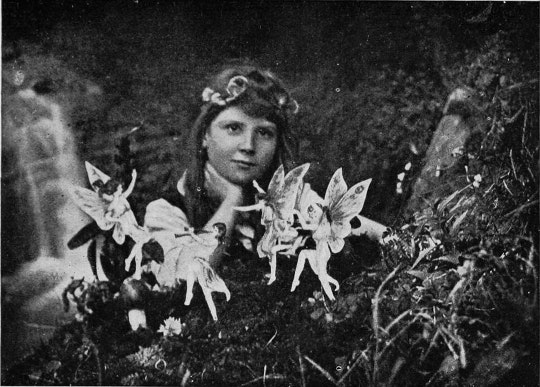 The first fairy photograph, featured in Conan Doyle's The Coming of the Fairies (1922) - Source

As part of his investigation, Gardner walked with Elsie to the exact spot, in front of a waterfall, where the photo had been taken. He was glad to have a chance to question the girl alone, he later reported back to Conan Doyle. He asked Elsie what colors the fairies were and she told him they were “the palest of green, pink, mauve,” Gardner wrote to Conan Doyle. Elsie also told Gardner the gnome in the second photo had been wearing black tights, a reddish brown jersey, and a red pointed cap. In answer to Gardner’s questions about the markings on the gnome’s wings – both Conan Doyle and Gardner thought they looked like a moth’s wings — Elsie explained that they weren’t wing markings at all, but musical pipes. She added that on still days, you could hear the faint, high sound of gnome music. After that, Gardner reported back to Conan Doyle that the family’s “transparent honesty and simplicity” had convinced him, Gardner, that the photographs were entirely genuine. 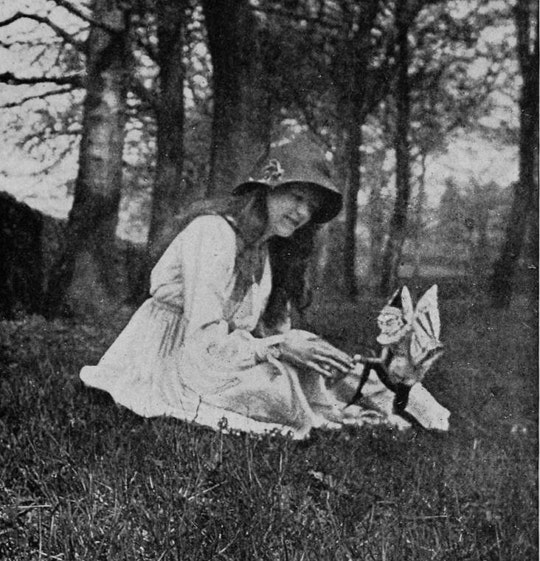 Elsie and the Gnome, featured in Conan Doyle's The Coming of the Fairies (1922) - Source

To Gardner, Elsie seemed a “shy pretty girl of about sixteen.” But at the time they met, she was really eighteen, going on nineteen, and for years had cherished the dream of becoming an artist. It was Elsie who had painted watercolor fairies, stuck them to hatpins, and arranged them in the foliage in front of Frances. It was Elsie who, using a complicated, old-fashioned camera to take her first-ever photo, managed to capture the strange, haunting image that would go down in history as the first Cottingley Fairy Photograph. Gardner had seen a number of Elsie’s watercolors displayed on the walls of her parents’ house. Still, he insisted that she was not a good enough artist to have drawn the fairies in the photos, and Conan Doyle believed him.

During his visit to Cottingley, Gardner implored Elsie’s parents to get her to take more fairy photos. Elsie insisted that wasn’t possible because Frances had to be there, too, for the fairies to appear. (By that time, Frances had moved away from Cottingley to the seaside town of Scarborough). Undeterred, Gardner arranged with Frances’ parents for Frances to spend part of her summer holidays in Cottingley. There was nothing either girl could do – the pressure was on. So when Frances arrived in Cottingley and the two were alone, Elsie told her she’d prepared two more cutout fairies, one for each girl. In the hidden valley, the two girls took two more photos. Then they both agreed, in secret, they would never take another fairy photo. 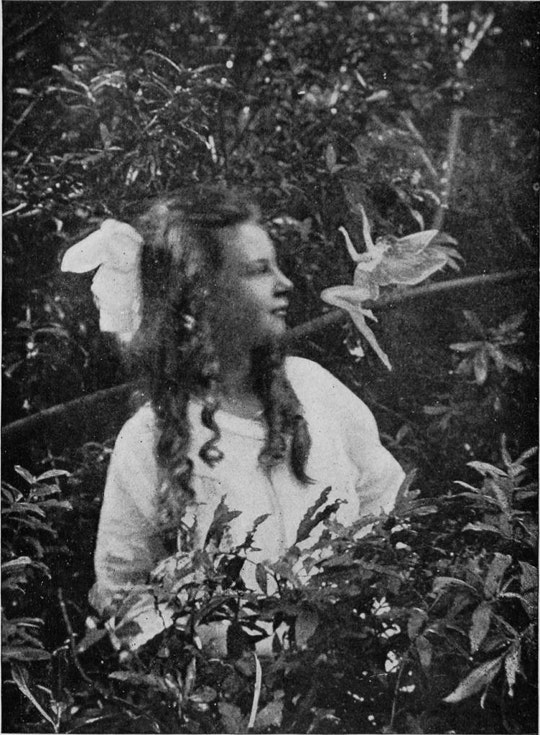 The Dancing Fairy, featured in Conan Doyle's The Coming of the Fairies (1922) - Source 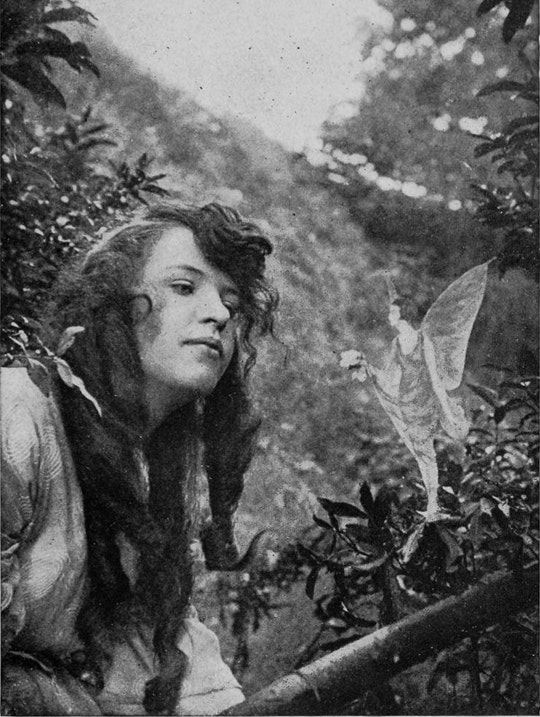 The Hairbell Fairy, featured in Conan Doyle's The Coming of the Fairies (1922) - Source

Gardner was delighted to get the two new photos, but even more thrilled with a third photo, one which Elsie had not faked. Both girls thought at the time it was just a bird’s nest, some rainwater, some shapes and shadows--but Gardner insisted it showed fairies. Conan Doyle thought so, too.

A second Strand article, published in March of 1921, announced “The Evidence for Fairies by A. Conan Doyle, With New Fairy Photographs.” In the article, Conan Doyle quoted Gardner’s assertion that the third and most amazing photo was a “fairy bower.” Conan Doyle also included Gardner’s remark that “We have now succeeded in bringing this print out splendidly.” The article did not say what Gardner meant by “bringing out” the print. 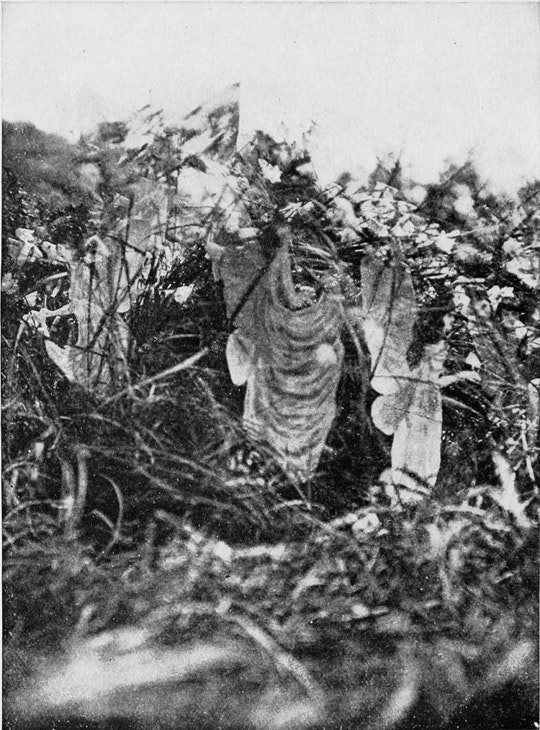 A Fairy Bower, featured in Conan Doyle's The Coming of the Fairies (1922). Elsie and Frances both claim that this particular photograph was not faked - Source

The man who had created the world’s greatest detective never knew how badly astray his own investigation had gone. In part to avoid embarrassing him, Elsie and Frances did not reveal the secret of the paper cutouts until long after his death. Elsie had once seen what she remembered as “cruel” cartoon of Conan Doyle in a magazine, and perhaps by then she realized, too, how desperately he wanted the fairy photographs to be real. If the photos were real, Conan Doyle wrote in The Coming of the Fairies, a book that included both Strand articles, they would provide the first solid evidence that whole new orders of invisible beings existed in our world.

“There is nothing scientifically impossible, so far as I can see, in some people seeing things that are invisible to others,” Conan Doyle wrote. He did concede that it would take some time before “the ordinary busy man” realized that “this new order of life is really established and has to be taken into serious account, just as the pigmies of Central Africa.”

“Victorian science would have left the world hard and clean and bare, like a landscape in the moon,” Conan Doyle wrote, but now -- with the coming of the fairies -- everything had changed. “One or two consequences are obvious,” he wrote. “The experiences of children will be taken more seriously. Cameras will be forthcoming. Other well- authenticated cases will come along. These little folk who appear to be our neighbors, with only some small difference of vibration to separate us, will become familiar.”

Conan Doyle’s belief in spiritualism, séances, and “the spirit world” is well known, yet his steadfast belief in the Cottingley Fairies is sometimes glossed over or even ignored by biographers. It shouldn’t be; it’s a telling glimpse into the character of a man too often confused with his cold, rational hero. 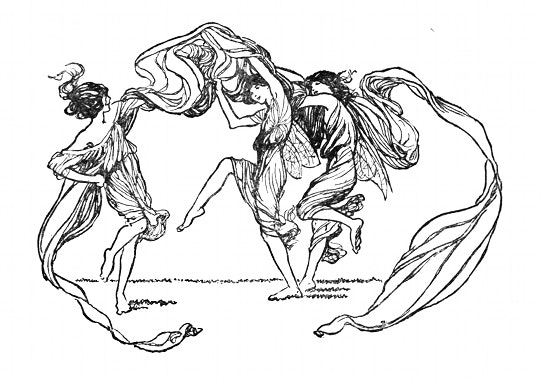 The fairy illustrations from which Frances and Elsie based their cut-out figures, from "A Spell for a Fairy" by Alfred Noyes, published in Princess Mary's Gift Book (1915) - Source

NB: Images featured in the article above are public domain only in the U.S.

Mary Losure is the author of The Fairy Ring: Or Elsie and Frances Fool the World (Candlewick, 2012), named Booklist Editors' Choice Best Youth Nonfiction, 2012 and Wild Boy: The Real Life of the Savage of Aveyron. You can view her website at www.marylosure.com and the book trailer for Wild Boy on YouTube.