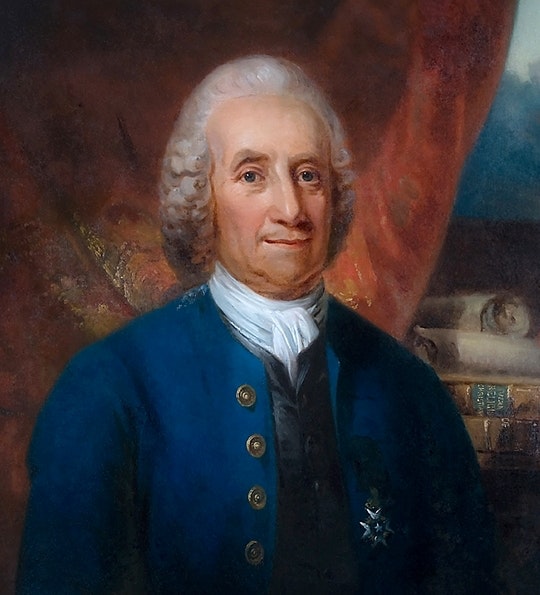 Among the many works of the eighteenth-century Swedish scientist, philosopher, religious teacher and visionary Emanuel Swedenborg (1688-1772) his private Drömbok (variously translated into English as Journal of Dreams or Dream Diary) has attracted and continues to attract special attention. Unlike the works he published in his lifetime, or intended to publish, which were all written in Latin, the Journal of Dreams was, in the words of a present-day Swedish Swedenborg scholar, written in ‘rather crude but expressive Swedish’ (Jonsson, 16). It has been described as a ‘difficult and obscure notebook’ (Jonsson, 130) which ‘reflects a profound psychical crisis’ (Jonsson, 150).

The Journal covers a period from July 1743 until October 1744, a time when Swedenborg was going through a transition from life as a scientist and mining engineer to one as a ‘revelator’ and seer. As he was to put it himself:

I for my part… had never expected to come into that state in which I am now; but the Lord selected me for this, and for revealing the spiritual meaning of Scripture, which he had promised in the Prophets and in the Book of Revelation. My purpose previously had been to explore nature, chemistry, the science of mining, and anatomy, etc’ (Robsahm, 6).

It begins as a factual travel diary, describing how he leaves Sweden by the port of Ystad (famous today as the home base of the fictional detective Kurt Wallander), crossing the Baltic to Stralsund and then journeying through Hamburg and Bremen to the northern provinces of the Netherlands (then known as the United Provinces), Groningen and Friesland, where the diary breaks off abruptly on his arrival at the town of Harlingen in the latter province. After some undated fragments it resumes at the end of March 1744. A week or so later during Easter weekend, in what is probably the most significant part of the Journal, Swedenborg describes in detail a vision of Christ he had while staying in Delft (just three miles from The Hague). In late May Swedenborg travelled on to London where he became involved for a while with the congregation of the Moravian Church in Fetter Lane. In total, one hundred and fifty dreams are described, of which about one third involve science, not surprising in view of Swedenborg’s professional interests at the time. Indeed, his purpose in travelling to the Netherlands was to complete and deliver to his printer in Amsterdam the manuscript of his work Regnum Animale (‘The Animal Kingdom’ or ‘The Soul’s Domain’, the latter a much better English rendering of the Latin) - a book which aimed to explain the soul from an anatomical point of view. As well as the scientific, the Journal contains mostly dreams of a religious nature. Among the heavenly visions come other scenes both mundane and fantastical: a cast of various dogs, Kings, an executioner with his heads, dragons, a talking ox, and an abstract apparition of an oblong globe. There are also many women and, as we shall see, some dreams that are erotic in content. 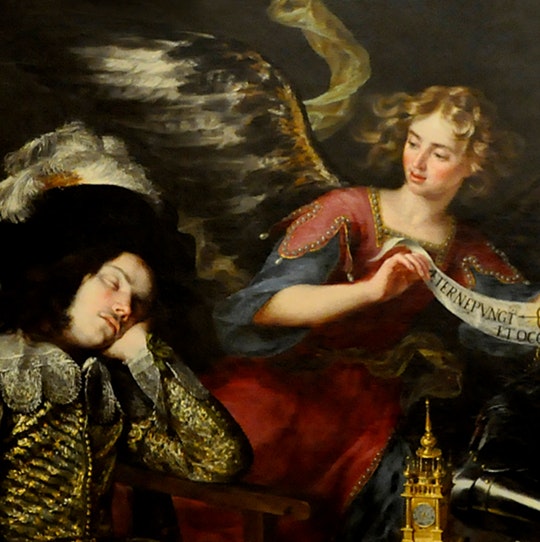 Detail from The Knight's Dream (1655) by Antonio de Pereda - Source.

After his death in 1772, the manuscript of the Dream Journal was preserved by Swedenborg’s family, but in 1858 it was bought by the Royal Library in Stockholm. The following year the Royal Librarian GE Klemming published it in a limited edition of ninety-nine copies as Swedenborg’s drömmar (‘Swedenborg’s Dreams’). Klemming had been shocked by the highly erotic descriptions in some of the dreams and to avoid prosecution had kept within the legal limit of one hundred copies, sending it only to ‘enlightened thinkers and those interested in the subject’. One of the recipients was the Englishman James John Garth Wilkinson, a doctor who had already translated and published Swedenborg’s manuscript De Generatione (‘The Generative Organs’). Wilkinson was to translate the Dream Journal into English in 1860. This translation was not immediately available and it was a slightly later one by RL Tafel which gained currency when it was published in the second volume of his book Documents Concerning Swedenborg in 1877. However, Tafel omitted the erotic material and it wasn’t until C.Th. Odhner’s translation published in 1918 that the offending passages were reinstated, albeit in the guise of Latin. Despite its age, this translation has been described as the ‘linguistically most faithful of the English editions’ (Bergquist, 7). Odhner, a minister of a Swedenborgian ‘New Church’ congregation in the USA, explained that he had translated the passages omitted by Tafel into Latin ‘as the students of the Church certainly should have an opportunity to judge of their character and contents’.

Quite early in the Journal Swedenborg noted that after arriving at The Hague ‘…the inclination for women, which had been my chief passion, so suddenly ceased’. Swedenborg never married, nor is it recorded that he ever had a long-term mistress, but later entries reveal a man with strong heterosexual feelings who, in modern parlance, had been ‘sexually active’. While the Journal shows him to be a man who felt guilty and full of sin, this sense does not seem to have extended to sexual matters and in this regard he was very much an eighteenth-century ‘man of the world’. In one vivid dream, no. 171, Swedenborg finds himself in bed with a woman. She touches his penis with her hand and he has an erection, bigger than he has ever had. He penetrates her, reflecting that a child must come of this, and writes that he got off en merveille. (He uses the French expression in the original.) In the next paragraph, no. 172, Swedenborg explains that this dream signifies the ultimate love of the holy and that the ejaculation of semen represents the love of wisdom. Worldly reason considers this to be impure, but in reality it is pure. This is something that Swedenborg would develop in his later books, above all in Conjugial Love, where he insists that erotic love is of divine origin, although human beings may pervert it to selfish, and therefore evil, ends. 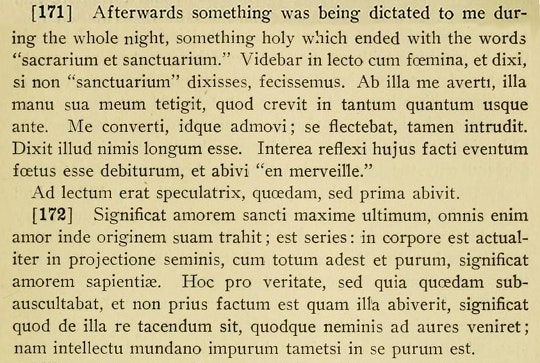 Dream no.171 and 172 as they appear in C.Th.Odhner's English translation from 1918. As the account veers into the 'unsuitable' Odhner changes from English to Latin - Source.

In another dream he is unable to control his desire for a woman and finds himself in the company of his friend Professor Niklas Oelreich (among other things the censor of the Swedish press from 1746) in visiting brothels, although without, apparently, the intention of having sexual intercourse. In a remarkable dream (no. 120) he is lying with a woman who was not beautiful but who pleased him. He touched her vagina and discovered that it had a set of teeth. Suddenly this woman assumes the form of a man, the politician Johan Archenholtz, a friend and ally of Swedenborg’s. The image of the vagina dentata (vagina with teeth) appears again in no. 261 where he sees in a vision a fiercely burning coal fire that represents the ‘fire of love’. Then he is with a woman whom he wants to penetrate, but the teeth prevent him entering her. We know now that the image of the vagina with teeth is found in folklore, notably in Japanese folktales and also in the mythology of the Chaco and Guiana tribes in South America. They may be cautionary tales warning men of the dangers of sex with strange women. Erich Neumann, the pupil of Carl Gustav Jung, relates the myth of the ‘Terrible Mother’ in his book The Great Mother (1955). The hero is the man who breaks the teeth and restores the woman’s femininity. In her book Sexual Personae: Art and Decadence from Nefertiti to Emily Dickinson (1990) Camille Paglia explains that the toothed vagina is ‘no sexist hallucination’ - every penis is diminished by every vagina, ‘just as mankind, male and female, is devoured by mother nature’.

It is remarkable that Swedenborg, presumably ignorant of the presence of the myth in folklore and unacquainted with modern psychology, should dream quite spontaneously of the toothed vagina. Yet Lars Bergquist, the contemporary editor of the Journal of Dreams (called Swedenborg’s Dream Diary in this edition), makes no reference to the presence of the phenomenon of the vagina dentata in folktales or its significance in modern psychology.

The Victorian translators of the Journal of Dreams - with the exception of Garth Wilkinson who regarded his translation of The Generative Organs as ‘one small step on the way to a greater liberty of thought and knowledge on sexual subjects’ (in a letter to his friend Henry James senior) - were shocked by the erotic content of the Journal and either omitted it (Tafel) or hid it from the eyes of the uneducated and presumably prurient reader (Odhner). Even today, commentators on Swedenborg tend to play down those passages in the Journal and in other works. But for the modern reader these passages show Swedenborg as a heterosexual man subject to ordinary sexual urges and desires. They ‘humanize’ a man who might otherwise be considered an austere scientist and seer. Given the later emphasis that Swedenborg gave to sexual love between men and women, an analysis of the eroticism of his dreams at a crucial turning point in his life would seem to be an important and worthwhile subject of further study.

Richard Lines is the Secretary of the Swedenborg Society. He is the author of A History of the Swedenborg Society 1810-2010 (2012) and of numerous articles on Swedenborg, his influence on 19th century literature and on early Swedenborgians, including articles published on the Bloomsbury Project website. He has given papers at academic conferences at the universities of Oxford and York, University College London and the Royal Swedish Academy of Sciences in Stockholm. He lives in London.