The Implacability of Things

Jonathan Lamb explores the genre of 'it-narratives' - stories told from the point of view of an object, often as it travels in circulation through human hands. 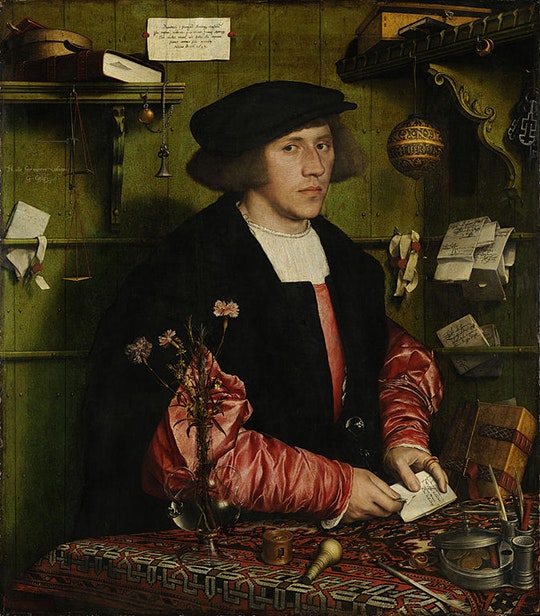 The Merchant Georg Gisze (1532) by Hans Holbein the Younger.

Some of the best recent books about things, such as John Plotz's Portable Property (2008) and Elaine Freedgood's Ideas in Things (2006), deal with artefacts, commodities and curiosities that find their value and significance by means of circulation, moving from place to place and hand to hand. These journeys of things were the theme of the essays edited by Arjun Appadurai in his landmark collection, The Social Lives of Things (1986). The title glanced at Marx's theory of commodity fetishism, sharing the assumption made in Capital I that things get a life by moving about and meeting other things; and that if these things have an ambition, it is to act like human beings: that is socially. The sociability of things seems to be co-extensive with the market that generated the system of exchange value; for just as the merchant's interest is focused on the most desirable commodities -- those that move the fastest and never lie upon his hands -- so the commodities themselves desire nothing better than to be in perpetual motion, meeting their own kind and mutually proclaiming their importance. Even among thing-theorists operating with a very different model, the principle of sociability looms large. Bruno Latour believes that things "circulate in our hands and define our social bond by their very circulation."

The rapid transit of things in trade and commerce provided the impulse behind a genre of fiction that became popular in the eighteenth and early nineteenth centuries, with titles such as The Adventures of a Watch and The History of a Lady's Slipper. They were called 'it-narratives' or 'novels of circulation' and they recorded (usually in the first person singular) the experience of things as they pass through the hands of a series of owners. The things that lent themselves most readily to this new format were those that were most mobile - money and vehicles. Two of the most popular it-narratives in the latter half of the eighteenth-century were Chrysal; or Adventures of a Guinea (1760) and the anonymously authored Adventures of a Hackney Coach (1783).

It struck me after reading some of these stories that if one were to look for the ancestors and descendants of this new genre, they would not yield such a congenial meeting of the interests of humans and things. In the animal fables and oriental tales to which it-narratives are clearly indebted, pain, degradation and extinction await those in thrall to despotic power; and despotic power, as Sir William Blackstone pointed out, was what all property-owners long to exert over their possessions. To this contradiction is owing the many scenes of cruelty depicted in it-narratives, inflicted on animate and inanimate things alike. In the slave narratives that followed it-narratives, many of the humiliations befalling things in the hands of humans (see, for example, The Life and Perambulations of a Mouse (1784)) are endured again by humans who have been transformed into property. These are not worlds where goods and owners see their sociability reflected in each other's freedom of movement. They are more like the scenes of Ovid's Metamorphoses, where the power of the gods painfully transforms humans into what is not human. Apuleius's The Golden Ass is an extraordinary display of the politics of divine oppression in which Venus enslaves Psyche, her clandestine daughter-in-law, and Psyche resists with the help of things -- insects, water, reeds and stone. 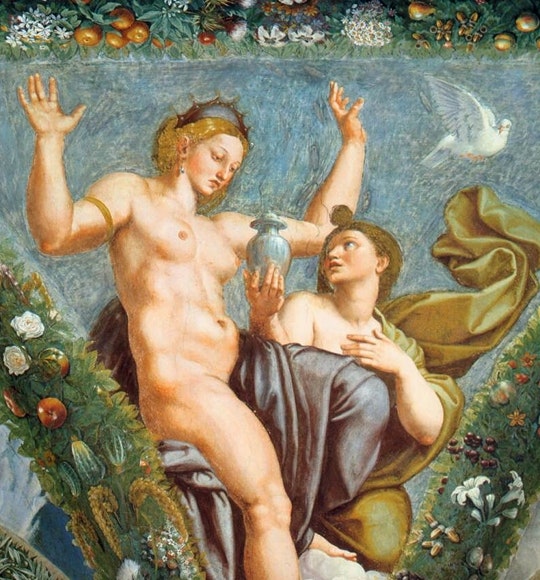 Detail from Raphael's Venus and Psyche (1517), showing Venus unexpectedly recieving the Water of Styx from the relentless Psyche.

Where among the books I had been reading might one find examples of this resistance? Well, in Charles Gildon's inaugural it-narrative, The Golden Spy (1709), a story owing its title to Apuleius and its narrative to a collection of vocal coins, the narrator confesses he has edited his material for fear that money's scandalous revelations should "destroy all Confidence betwixt Man and Man, and so put an End to human Society" (Gildon 1709: 116). The impetus is not towards sociability but its very opposite: humans are exposed as hypocrites by things whose motive is not a principle of moral honesty and social unity but feelings of contempt and revenge. There is no invisible hand in this story capable of restoring the passions and the interests to a social equilibrium. Nor is there in one of its most important successors, Gulliver's Travels. Here is an it-narrative told by a horse -- not a horse that has found a human voice like Black Beauty, but one that was formerly a human until the bond of species was broken by disgust, and whose isolation from the reader is dramatically and obviously total.

Theodor Adorno called the thing at the other side of this stand-off implacable (he was talking about the door-handles of American cars), a word suggestive of a non-negotiable hostility that flourishes in the literature of things, jeopardising the mental health of the humans who encounter it. An implacable whale drives Captain Ahab mad in Moby-Dick; implacable collectibles drive Owen Gereth to arson in The Spoils of Poynton; and Fagin is driven to despair in Oliver Twist by the things he stares at so attentively while under sentence of death -- a broken pencil, an iron spike with the end knocked off -- because they are so devoid of pity. John Banville catches the echo of such implacability in his detective story The Silver Swan:

Over every scene of violent death . . . there hung a particular kind of silence, the kind that follows after the last echoes of a great outcry have faded. There was shock in it, of course, and awe and outrage, the sense of many hands lifted quickly to many mouths, but something else as well, a kind of gleefulness, a kind of startled, happy, unable-to-believe-its-luckiness. Things . . . even inanimate things, it seemed, loved a killing.

You can see Dickens learning about the implacability of things. In Sketches by Boz he includes 'Meditations in Monmouth Street,' a market for second-hand clothes. Boz looks at the garments hanging up and imagines the lives of their owners: "We have gone on speculating in this way, until whole rows of coats have started from their pegs, and buttoned up, of their own accord, round the waists of imaginary wearers." It is an exercise in anthropomorphism: property makes sense again when it is bulked out by the form of an owner. How different to the mementoes arranged on the mantelpiece of Jaggers's office, or on Wemmick's watch-chain, in Great Expectations. These are travesties of curiosities and sentimental keepsakes, mementoes alien to human interests, coming fully into their own when owners are removed, usually suddenly and violently. This is exactly how Wemmick is driven to define his ideal of portable property after Magwitch's capture and imminent death: "I do not think he could have been saved. Whereas, the portable property certainly could have been saved. That's the difference between the property and the owner, don't you see?" 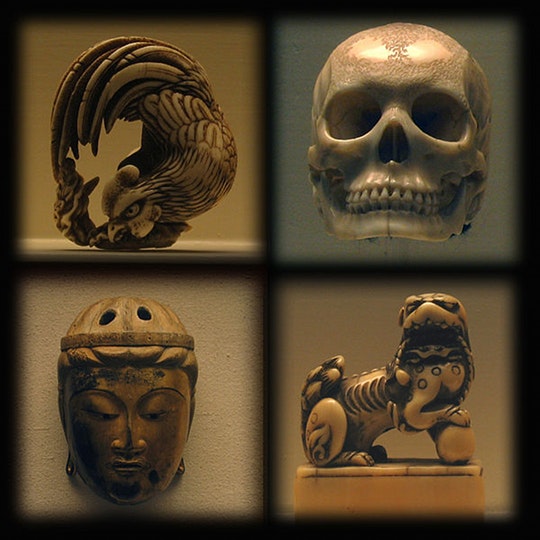 Edmund de Waal's memoir published last year, The Hare with the Amber Eyes, was a story of the loss and recovery of a family heirloom, a collection of Japanese netsuke. These tiny figures of creatures and humans made of ivory or boxwood were owned by the rich banking family of Ephrussi in Vienna, until they were sequestered by the Nazis along with the rest of their treasures as 'ownerless Jewish property' -- a category close to Wemmick's idea of portable property. The story offered to be a heartwarming account of sentimental value, and generally this is how it has been read. Anna, the faithful servant who has been allowed to remain in the Ephrussi palace, saves the netsuke in twos and threes, hiding them first in her pocket then in her mattress until a member of the family arrives after the end of the war to whom she can say, "I have something to return to you." De Waal grants that for Anna each one of the netsuke may be "a resistance to the sapping of memory . . . a story recalled, a future held on to." But that is emphatically not how they strike him: "The survival of the netsuke in Anna's pocket, in her mattress, is an affront. . . . Why should they have got through this war in a hiding-place, when so many hidden people did not? I can't make people, places, and things fit together any more." This is a shocking moment but it has been carefully advertised by the narrator when he talks of the heaviness acquired by things during an Umsturz in civil society, and when he quotes Maupassant to the effect that "The bibelot is not only a passion, it is a mania." Maupassant wrote a story about a man who came back from the opera to find all his possessions leaving the house. After a series of fruitless attempts to repurchase them he lodges himself in an insane asylum, whereupon his missing things reoccupy the house, presumably on their own implacable and defiant terms.

There are genres of fiction where we allow things to be sinister or significant in an unsettling way - Gothic romance and the detective story, for example - but the it-narrative is generally expected to be comic and anthropocentric. Yet for a number of reasons this is seldom how it deserves to be read. Whether it is owing to its origin and terminus in the narratives of slaves, or to its coincidence with the financial revolution and the growing unaccountability of mass human behaviour, or to the growing appetite for print ephemera, or to the end of feudal tenures and the resulting anomalies of personal portable property, or to the irreversible metamorphoses precipitated by the holocaust, ordinary things situated in banal circumstances develop a salience that has nothing to do with symbolism or hidden meaning. They are just there, eying their human adversaries, implacable and meditating affronts.

Jonathan Lamb is the Andrew W. Mellon Fellow of the Humanities at Vanderbilt University, currently on a Guggenheim Fellowship in Britain where he is writing a book titled Scurvy: The Disease of Discovery. His most recent books are The Things Things Say, published last year by Princeton University Press, and The Evolution of Sympathy, (Pickering and Chatto, 2009).