The World According to Pitt

UK NATIONAL ARCHIVES - Jo Pugh explores the newly digitised letters of former British Prime Minister William Pitt the Younger and his sister Hester, and how their contents shed an intimate light on one of the most politically influential families in British history.

Being the archives of government, the National Archives’ records are not, by and large, full of the voices of children. But in the Chatham Papers we find some of my favourite documents in the whole collection: a small selection of the childhood letters of William Pitt and his sister Hester, preserved by Prime Minister1 Pitt the Elder and his wife Lady Chatham.2 The Pitts had five children: Hester, John, William, Harriot and James. Pitt senior called them his “delightful, promising little tribe”. Over the course of the twenty-four letters in the collection William Pitt goes from six to about seventeen and Hester from ten to fourteen. Here is William's first letter from May 1766: 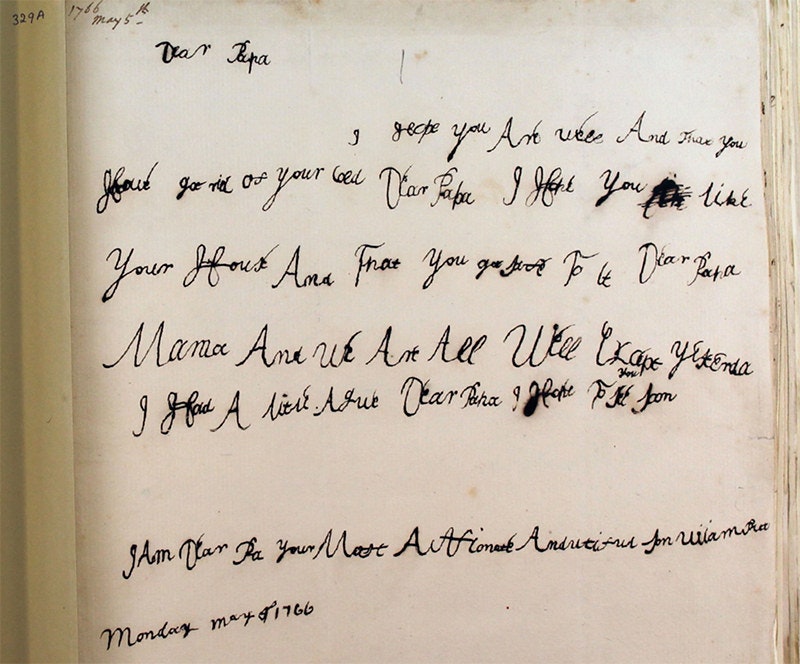 The earliest letter of William Pitt's in the National Archives collection, written in May 1766 when William was just 6 years old - Source.

If it comes as something as relief to see that the future Prime Minister was not born writing immaculate copperplate handwriting, consider this example, painstakingly inscribed only a month later. As a teenager William appears to struggle with his handwriting and in some of the later letters he apologises to his mother for “innumerable blots” or for “scribbl[ing] in such a manner that I am really ashamed.” William's precociousness is of course infamous and was most celebratedly lampooned by Ben Elton and Richard Curtis in Blackadder. In the period sitcom, the pint sized PM seems perturbed by the recollection of his own school days. In reality none of the Pitts attended school, all being educated at home by the same tutor, Edward Wilson. The perceived inadvisability of school attendance is illustrated nicely by Hester's encounter with one Dr Barnes, a character who appears to be straight out of a Henry Fielding novel, but is in fact a real person whose twitterings are preserved in her diary. “A pretty Personage, booted and spurred, somewhat animated”, records Hester, in the sort of world weary tone one might associate with a teen movie, “Servant Gentlemen, fine prospect here, My name is Barnes. I practice Physick and Surgery. What school does my Lord go to? None. Ay that's right, danger of taking vice, Lord Chatham knows better than anybody.” 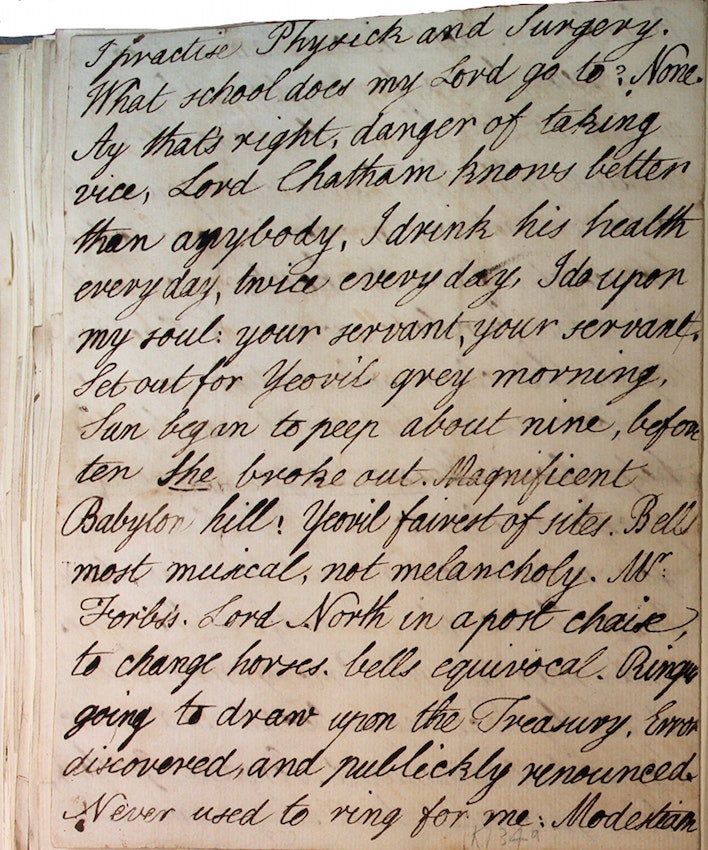 Historically, it is William who gets all the attention but he and his sister were both exceptional children: Hester begins writing letters in Latin to her father at the age of 10. These contain obvious errors3 but are altogether better than (say) my Latin composition, so let's not quibble too much. William could also apparently write in Latin from a very young age but all his surviving letters in this little collection are in English. In her Latin letters, Hester enthuses about an art exhibition in London featuring animal paintings (it sounds like George Stubbs and includes a painting that, we are assured, looks like their dog Mumble), complains rather bitchily that cousin Louisa can speak French but no longer English and mentions pneumatical experiments which sound like the sort of thing Joseph Wright of Derby liked to paint. 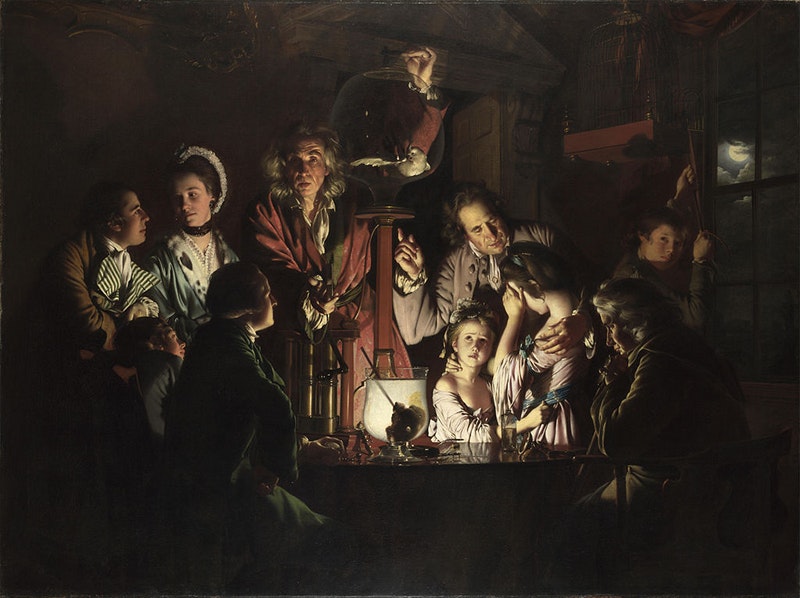 An Experiment on a Bird in an Air Pump by Joseph Wright Derby, painted in 1768 when William was 9 and Hester 13.

Pitt senior may have been called 'the Great Commoner' but the lives of his children were anything but common, though they are representative of how a certain section of Georgian society lived and somewhat reminiscent of a modern celebrity lifestyle: multiple homes, meeting other celebrities and a certain amount of popular enthusiasm. Few modern celebs could boast of the “ringing of hand bells and strewing flours” that greeted the Pitt children on a brief stopover at East Grinstead on the way to Brighton in 1767. “When we first entered the town”, wrote Hester enthusiastically, “there were a great many young men drest in white with white wands who run [sic] by the coach”. 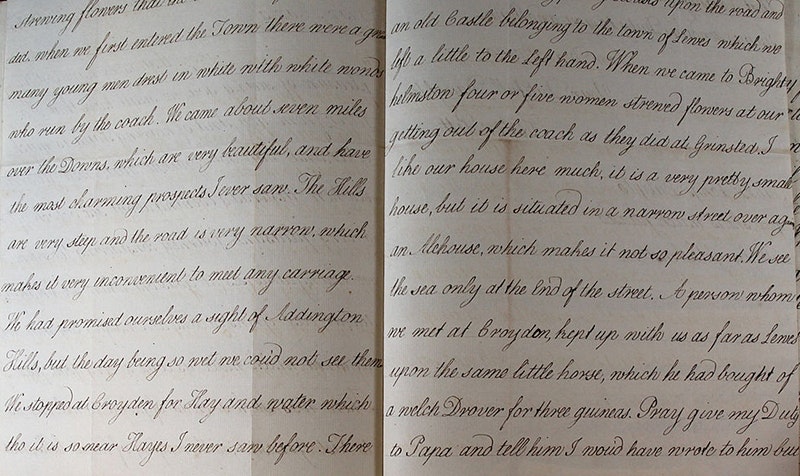 A letter written by Hester mentioning her journey to Brighton in the summer of 1767 - Source.

We can see the children's contrasting reactions to, say, Pitt senior being made Earl of Chatham. William is seven, Hester is ten. Both write to their mother and “wish you and Papa joy of being Earl” but William is more interested in the possibility of a new pet for the family, telling his mother “I shall desire to have the dog which you bought on the road”. Animals were a strong feature of the children's upbringing. In addition to dogs and horses (“William's little horse is a dark iron grey, and has a switch tail, they say it is about as handsome as Beauty”), pigeons were also kept on their estate at Burton Pynsent. In April 1772, William informs his mother of an attack on one of their pigeons by an “audacious Hawk” and declares “we have vow'd vengeance on him for this daring insult, and a gun is constantly kept loaded in the pantry for that purpose”, a statement contemporary parents may or may not find reassuring.

William's letter from 1766 congratulating his father on his new appointment as Earl of Chatham - Source.

For Hester on the other hand, their father's elevation is an opportunity to sneak in another mention of an episode which clearly fascinated her: the arrival of a group of Native Americans to Weymouth. This relatively newly fashionable resort patronised (in every sense no doubt) by King George III and considered “a sweet, clean, agreeable town” by Daniel Defoe, was visited by the Pitts in the summer of 1766. The children enjoyed playing in the sea and it is tempting to see little James' later naval career as having some sort of beginning here. In contrast, William’s most recent biographer William Hague cautions against believing stories of Pitt’s childhood interest in becoming an MP, calling them “fanciful”.4 In fact Hester tells us, John and Harriot declare “that if there was a concert of musick at Weymouth every day, still they should prefer the sweet chirping of the nightingales of Hayes. As to William he says if he was a sailor he should listen to Captain Trenchard's advice with all his heart. Tho he does not intend to be a sailor but a William Pitt in the house of Commons.” There is absolutely no question that at an age when most of us imagine ourselves train drivers,5 William Pitt saw himself in Parliament. 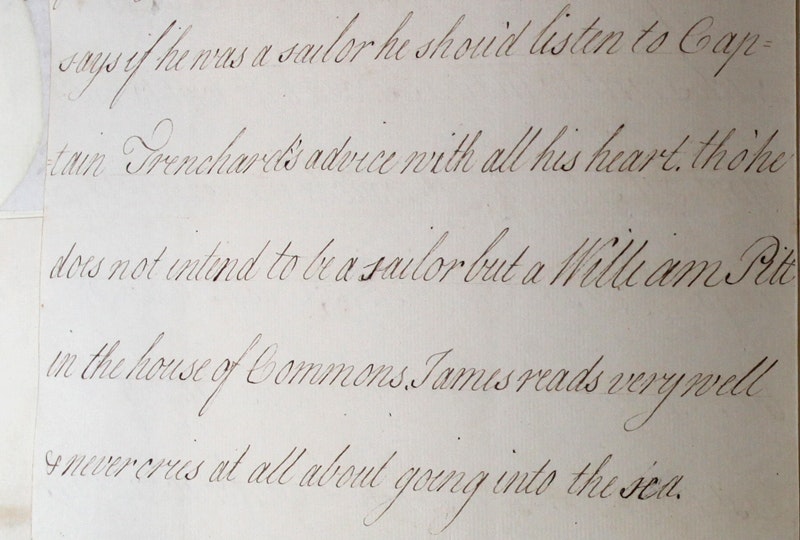 Hester's letter from 1766 mentioning William's desire, at only the age of 6, to follow his father into parliament - Source.

America is a recurrent theme in the letters. Pitt senior was strongly associated with conciliation with the American colonies. In one of his letters, William describes the defeat in the House of Lords of his father's Provisional Act by a large majority. Hester's Native Americans were a party headed for London led by Daniel Nimham (“We found by talking to them that they had Christian names the same as the English”), Chief of the Wappinger and three “Indians of the Mohecaunnuck” - or ‘Mahicans’, to move closer to the language of Fenimore Cooper. 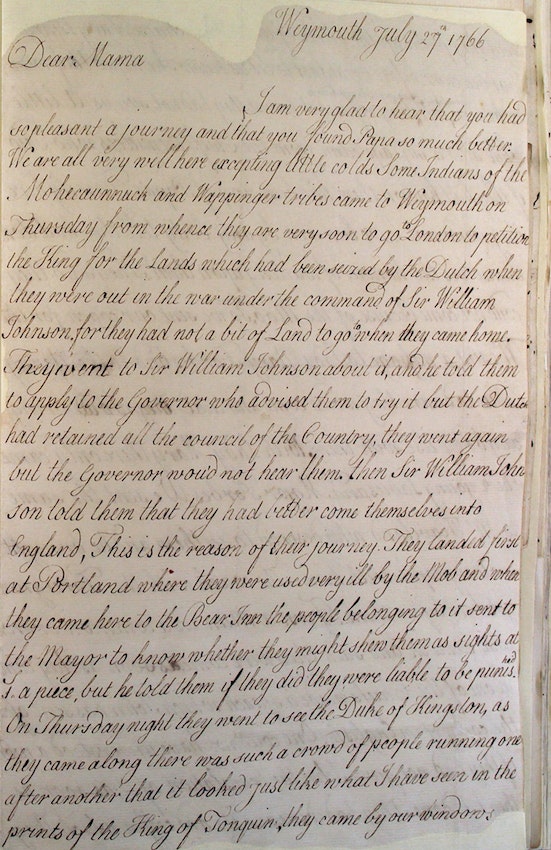 Hester's letter from 1766 describing the arrival of the 'Mohecannuck' Indians - Source.

Hester neatly summarises the case of the Chiefs whose object was to petition King George directly “for the lands which had been seized by the Dutch when they were out in the war under the command of Sir William Johnson. For they had not a bit of land to go to when they came home.” Visits by American leaders to Britain were unusual but not unprecedented and they often had the same intention, namely to sidestep recalcitrant local officials.6 Or in Hester's words, “the Dutch had retained all the council of the Country, they went again but the Governor would not hear them.” The dangers of a journey from modern day upstate New York, to England can be easily imagined. What is perhaps less immediately obvious are the difficulties faced by the distinctive in Georgian England: “They landed first at Portland where they were used very ill by the Mob and when they came here to the Bear Inn the people belonging to it sent to the Mayor to know whether they might shew them as sights at [a penny] a piece, but he told them if they did they were liable to be punished.” Ultimately, though the group were received sympathetically in London, this resulted in no change in their situation in New York. Daniel Nimham was subsequently killed fighting against the British in the War of Independence.

Another recurring theme within the letters is travel. The Pitts owned several houses including Burton Pynsent in Somerset, Hayes Place, closer to London and (by the extended family) Stowe. But where another family might have divided their time between properties, the Pitts divided themselves with Lady Chatham taking the three eldest children to Hayes and William and James staying at Burton Pynsent with their father. Many of William's letters to his mother refer to this separation and there is a mix of joking with his siblings (calling them, for instance “dumb waiters” for not writing) together with a clear hankering for the family to be reunited. 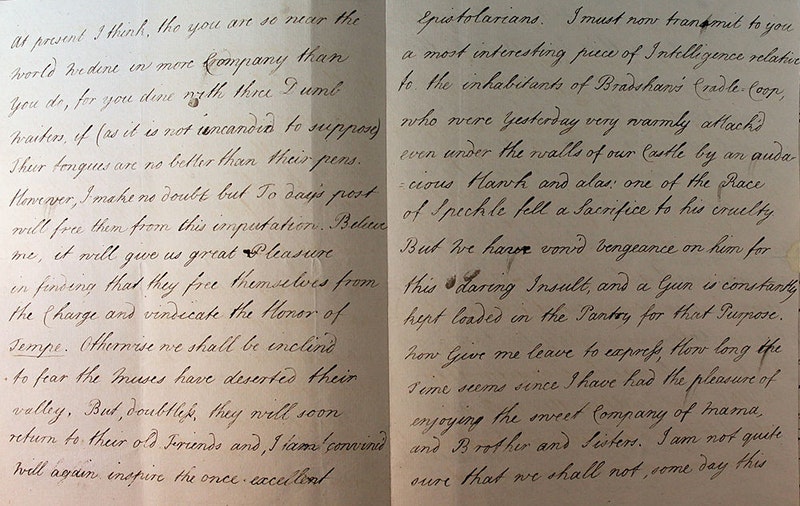 Parents of an earlier generation might have thought the children frightfully indulged (Susannah Wesley claimed her children “were taught to fear the rod, and to cry softly” by the age of one) but Roy Porter argues that a more relaxed parenting style was now in vogue.7 In contrast to the Wesleys, the Pitts went on holiday to Brighton with neither father nor mother and Hester's diary makes her sound like a young Celia Fiennes, riding across the country paying visits to already popular tourist destinations like Winchester Cathedral (“shew-man of the church an excellent Antiquarian and correct speaker”) and Salisbury. This was a young Britain: over 45% of the population was under 20 and children would certainly have been both seen and heard.8 But there are two sides to this statistic. A number of the Pitts died young: Hester was dead at 25, from complications after the birth of her daughter Lucy, Harriot at 28 in childbirth. James was just 19 when he died of a fever in the West Indies, while commanding HMS Hornet. Their short lives give a poignancy to the letters and help remind us that the correspondence shows us much more than the early experiences of a towering political figure, they reveal a unique group of people growing up together and give us a very personal look into the heart of Georgian family life. 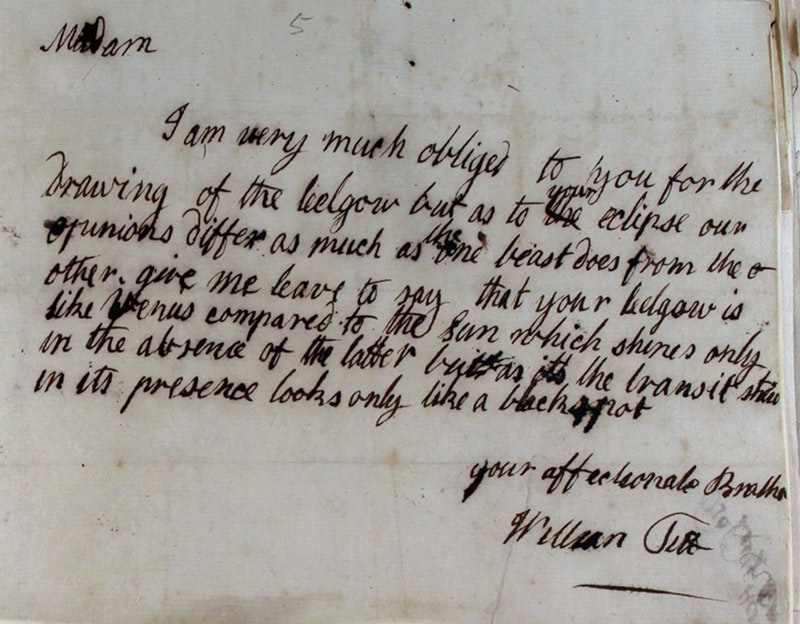 Jo Pugh is a Research Engineer at The National Archives and the University of York funded by the ESPRC. His podcast "How to win a duel" is intended for information only and he cannot be held liable for any defeat or injury suffered by listeners.