Arika Okrent explores the rise and fall of Volapük - a universal language created in the late 19th century by a German priest called Johann Schleyer. 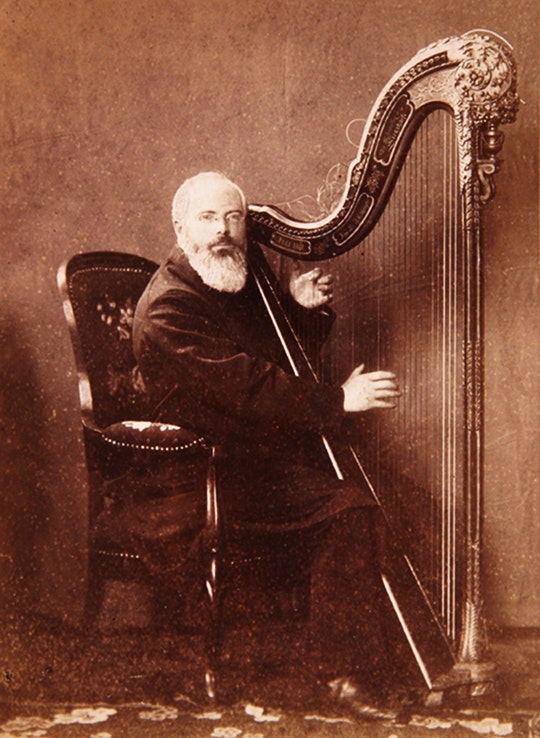 Johann Schleyer on a harp given to him as a 50th birthday present by his colleagues at Sionsharfe, a magazine devoted mainly to Catholic poetry, which Schleyer edited and in which he first published on Volapük in 1879 - Source.

Johann Schleyer was a German priest whose irrational passion for umlauts may have been his undoing. During one sleepless night in 1879, he felt a Divine presence telling him to create a universal language. The result was Volapük. It was designed to be easy to learn, with a system of simple roots derived from European languages, and regular affixes which attached to the roots to make new words. Volapük was the first invented language to gain widespread success. By the end of the 1880s there were more than 200 Volapük societies and clubs around the world and 25 Volapük journals. Over 1500 diplomas in Volapük had been awarded. In 1889, when the third international Volapük congress was held in Paris, the proceedings were entirely in Volapük. Everyone had at least heard of it. President Grover Cleveland's wife even named her dog Volapük.

Though Schleyer was German, a large part of the Volapük vocabulary was based on English. "Volapük" was a compound formed from two roots, vol (from "world") and pük (from "speak"). However, it was often hard to spot the source of a Volapük word because of the way Schleyer had set up the sound system of the language. "Paper" was pöp, "beer" bil, "proof" blöf and "love" löf. He had rational reasons for most of the phonological choices he made. For simplicity, he tried to limit all word roots to one syllable. He avoided the 'r' sound, "for the sake of children and old people, also for some Asiatic nations." The umlauts, however, were there for löf.

"A language without umlauts," he wrote, "sounds monotonous, harsh, and boring." He decried the "endlessly gloomy u and o," the "broad a" and the "sharp i" of umlautless languages. Though many members of the growing Volapük community may have agreed with his aesthetic judgment, many others thought that for Volapük to have a serious chance at being a world language, the umlauts had to go. 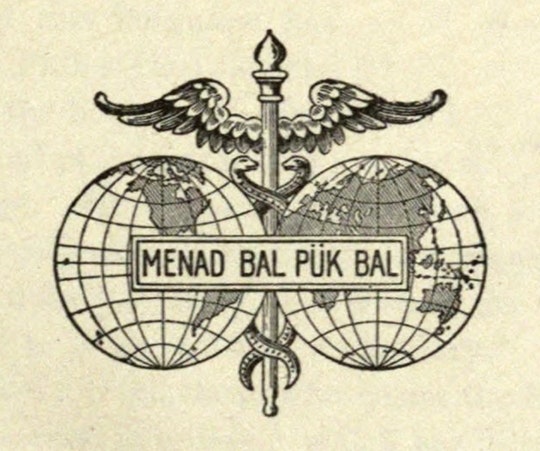 The official crest of Volapük, with its motto "menad bal pük bal" (One mankind, one language) - from the title page of Dictionary of Volapük (1889), by M.W. Wood.

Indeed, in the United States especially, those umlauts added a threatening and/or ridiculous air of foreignness to the language. Much fun was had at the expense of Volapük on account of those umlauts in local papers such as the Milkaukee Sentinel:

A charming young student of Grük
Once tried to acquire Volapük
But it sounded so bad
That her friends called her mad,
And she quit it in less than a wük.

By 1890 the Volapük movement was falling apart due to arguments about umlauts and other reforms. Schleyer left the Volapük Academy and formed his own academy of loyalists. Other Volapükists created their own versions of the language – Nal Bino, Balta, Bopal, Spelin, Dil, Orba – all of which immediately fell into the obscurity that soon swallowed Volapük itself.

Meanwhile Esperanto, another language that had been rapidly growing since its introduction in 1887, was scooping up all the new recruits to the universal language idea. Esperanto had no umlauts, nor problems with embracing 'r'. Its roots, though less based in English, were instantly recognizable. "World" was mondo and "to speak" paroli. "Paper" was papero, "beer" biero, "proof" pruvo, and "love" amo.

Schleyer decried Esperanto as "an ugly-sounding hodgepodge." He criticized its use of "unnecessary" and "difficult to pronounce" sounds like "sh" and "ch." He scoffed at it for allowing dipthongs ("Ugly!"), "harsh sound combinations," and the "rattling, hard, bony 'r'". Also, it had no umlauts. According to Schleyer, if you compared Esperanto to Volapük it was clear that one "was created by a Pole" (the Bialystok-born Ludovic Zamenhof), and the other by "a music connoisseur, composer, and poet."

Esperanto went on to become the most successful invented language of all time, but it too suffered from criticism, infighting, and its own schism. In 1907 a group of Esperantists backed a reform project called Ido, which did away with some of the awkward elements of Esperanto. They changed affixation rules that resulted in phrases like belajn semajnojn (beautiful weeks) so that they would instead produce bela semani. They got rid of the accented characters ĉ, ĝ, ĥ, ĵ, and ŝ, and replaced some of the challenging root words: pilko (ball) became balon and ŝtrumpo (stocking, pronounced shtrumpo) became kalzo. 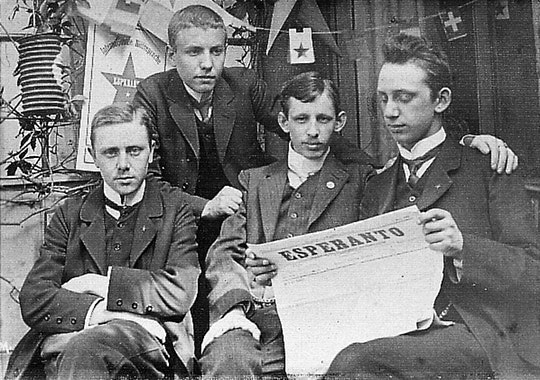 The four Presidents of the Youth Esperanto Club in Münster, Germany, in 1907 - Source.

But Ido died out and Esperanto marched on through to the current day without making the suggested changes. Today, Esperantists (some tens of thousands of them) are still happily enjoying belajn semajnojn at the parko, kicking around a pilko in their sandaloj and ŝtrumpoj. The little infelicities turned out not to matter all that much to the survival of the language. Every language has its lumpy bits, and beauty is in the ear of the beholder. You like potato; I like potahto, and Schleyer preferred pötet.

It wasn't really the umlauts that killed Volapük, but a combination of factors, the most important probably being that the chances of any artificial language gaining a following are slim to none. There were hundreds of invented languages that came before Volapük and hundreds that came after, and almost no one has heard of any of them. Esperanto is the rare exception, but its success (relative as it is) has less to do with its linguistic features than with the luck of timing and circumstances.

Volapük didn't die out completely. It has a bit of life today; there are a few online lessons and discussion boards. There is even a Volapük Wikipedia with over 100,000 articles. And its name lives on in the Danish expression det er det rene volapyk – "It's pure Volapük," or, in other words "It's Greek to me."

Arika Okrent is a linguist and the author of In the Land of Invented Languages.