5.2 Million Book Illustrations Deleted from Flickr — Help Get Them Back 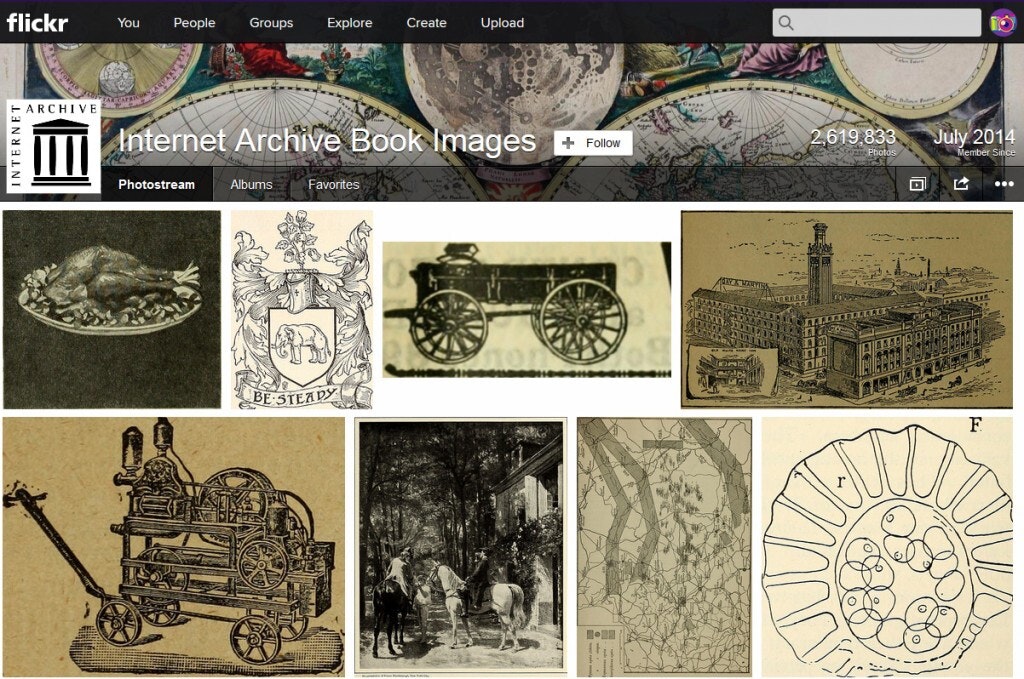 UPDATE: We did it — the collection is saved!

Flickr have agreed to reinstate the collection (though they are suggesting to do so in a way which will keep it separate from The Commons).

See this message from George Oates on the Flickr forum communicating their regret around what happened and outlining their future plan.

Thank you all so much for taking the time to lend your support to the campaign! And thanks to Flickr and Internet Archive for their quick response. After just a few hours of our open letter going live we had both parties talking openly about this on Twitter. It seems the deletion was Flickr's idea, but they've now said they will put it back online — though their idea is for it to be separate from the Commons.

We're very grateful for any home for the account, but do feel it's detrimental to have it siloed from others in the Flickr: The Commons family. It seems Flickr's chief concern was that, in search results, the Internet Archive images were drowning out images from other accounts. But couldn't this be solved with a simple filter? The option to include Internet Archive images could be turned off by default, so they were only seen by those who chose to see them.

Both Internet Archive and Flickr have been in touch directly, and this idea of the filter is something we hope to talk to Flickr about in more detail over the coming days.

Imagine a corner of the internet, free to all, where you could search, browse, and download from an archive of more than 5 million illustrations extracted from public domain books? And more than that, improve metadata by tagging and commenting, and contribute to findability by favouriting and saving images to your own publicly-accessible galleries? This very special space was the Internet Archive Book Images account on Flickr: The Commons.

I write was because a couple of weeks ago it was deleted. Expunged. Gone. Millions of searchable images from thousands of libraries wiped from every single gallery they were part of, including all the added data from comments and tagging done by users over many years. This disappearance is a huge blow to all the historians, artists, researchers, and others who enjoyed and made use of this invaluable resource, and, of course, all those who value the creations which utilised it. The Public Domain Review is one such creation. We’d frequently turn to the IA Book Images account to find visuals for essays and new leads on pieces, and we’ve now lost access to thousands of saved images, the links pointing to “page not found”. There’ll be many more like us.

There was no official announcement or warning about the deletion. The PDR learned of it through a Twitter thread by Danish designer Jonas Lönborg in which he lays out just why it is so heartbreaking. He also points to a Flickr forum post where users are coming to voice their confusion and upset, and where a Flickr staff member confirmed the deletion, writing:

As Lönborg and the forum members point out, these reasons are hard to parse. Couldn’t the search noise “problem” be solved by the simple use of a filter? The option to include Internet Archive’s images could even be turned off by default, so they were only seen by those who chose to see them. As for the scans not being photos, it’s unfortunate that Flickr has such a strict definition of purpose — a new policy it seems, as the IA’s Books Images account was announced with great pride by Flickr when launched in 2014. Even within this narrow focus, is it irrelevant that so many of the images were, in fact, photographs (just old ones)? And what does this mean for the other amazing accounts comprising illustrations from old books, such as those run by the Biodiversity Library and British Library? Is the whole of the brilliant Flickr: The Commons project on the wind down?

It’s an extra twist of irony that Internet Archive appears to have agreed to this deletion. We can’t imagine the heroes of digital preservation would simply send the account’s data to oblivion — perhaps they will make it available somehow on archive.org? But for all the greatness of Internet Archive (and it is truly great!) it doesn’t have the user-interface for images that Flickr has, the ability to save to galleries, add tags, and effectively search. That’s why it was such a marriage made in heaven. As far as we are aware, with the IA Book Images account gone, there is now no way to search for individual images from the hundreds of thousands of books at Internet Archive. Even if a new dedicated portal was set up, and the user-added metadata retained, it would suffer from being siloed from other accounts on Flickr — that was one of the big strengths, that you could browse contributions from Internet Archive’s account alongside bounteous offerings from the Biodiversity Library, British Library, Library of Congress, etc. And, of course, this isn’t to mention the huge amount of metadata now gone, the added knowledge lost, the galleries which users have spent years building just wiped.

By shutting down the account, Flickr and Internet Archive are undermining the trust that users have placed in them when tagging and enriching the collection. In addition, they are undermining their own longer term role and responsibilities as infrastructure for the cultural commons.

For those not familiar with IA Book Images it is frustrating to not be able to point you to it, to show you how great it was. You can get a sense, though, by looking at these articles around the 2014 launch, from the BBC, Library of Congress (with great detail), and Forbes (written by Kalev Leetaru, the data scientist and academic who engineered the IA Book Images project).

What can we do about this?

Reinstating the collection is not just a question of account management, but of trust, community, and the safekeeping of culturally significant material.

If sharing on Twitter you can use the hashtag #savethebookimages. Any leads, contacts, thoughts please write to Adam on adam.green@publicdomainreview.org.