A Classical Dictionary of the Vulgar Tongue (1788)

A Classical Dictionary of the Vulgar Tongue, by Francis Grose; 1788; London, S. Hooper.

Thirty years after Dr Johnson published his great Dictionary of the English Language (1755), Francis Grose put out A Classical Dictionary of the Vulgar Tongue (1785), a compendium of slang Johnson had deemed unfit for his learned tome. Grose was not one for library work. He preferred to do his lexicography in the sordid heart of after-hours London. Supported by his trusty assistant Tom Cocking, he cruised the watering holes of Covent Garden and the East End, eating, boozing, and listening. He took pleasure in hearing his name punningly connected to his rotund frame. And he produced a book brimming with Falstaffian life.

In Vulgar Tongues (2016), Max Décharné called Grose's dictionary, “A declaration in favour of free speech, and a gauntlet thrown down against official censorship, moralists and the easily offended.” While a good deal of the slang has survived into the present day — to screw is to copulate; to kick the bucket is to die — much would likely have been lost had Grose not recorded it. Some of the more obscure metaphors include a butcher’s dog, meaning someone who “lies by the beef without touching it; a simile often applicable to married men”; to box the Jesuit, meaning “to masturbate; a crime, it is said, much practised by the reverend fathers of that society”; and to polish meaning to be in jail, in the sense of “polishing the king’s iron with one’s eyebrows, by looking through the iron grated windows”. Given this was the era of William Hogarth’s famous print Gin Lane (1751), it’s not surprising to find the dictionary soaked through with colourful epithets for the juniper-based liquor: blue ruin, cobblers punch, frog's wine, heart's ease, moonshine, strip me naked. The Grose dictionary also contains hundreds of great insults, like bottle-headed, meaning void of wit, something you can’t say about its author. 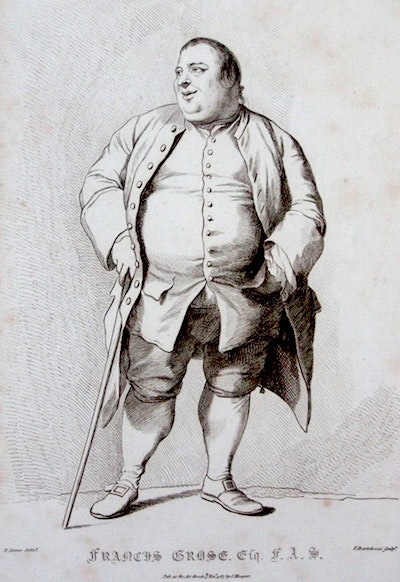 Other choice entries include: