A True and Wonderful Narrative of Two Intire Particular Phoenomena, Which Were Seen in the Sky in Germany (Philadelphia: Anthony Armbruster, 1764).

We hear with the greatest Astonishment, that near Riga in Livonia, has been seen in the open Sky, a fiery Rod, which struck about it, and the Points of the Rod were full of blood. Four great Swords stood at the Stary Heaven, which very often vanished, and soon appeared again; they did strike together like Flashes of Fire round a House it was frightful to behold. Likewise was to be seen with Horror, a pretty large Coffin, which was covered with three Dead heads; also a Pyramid and Serpent.

So opens the first of two accounts detailing unusual phenomena seen in the skies over Riga and Kirschberg (near Gdansk) in 1763. Published by Mannheim-born Philadelphia printer Anton Armbruster the following year, this short pamphlet was a translation of a German broadside titled Zwei wahrhafte von gantz besondrn Himmels–Zeichen. Why this translation for Philadelphia? Such strange news from Prussia would have likely appealed to the city's many German immigrants, but there was maybe more to Armbruster’s publication. Despite occurring across the other side of the world, such ominous signs from a wrathful God unhappy with a wayward populace, could speak to the citizens of the much-embattled Pennsylvania Province.

The year of 1764 was a troubled time for Philadelphia. After Armbruster’s former business partner Benjamin Franklin had, in early February, turned back the Paxton Boys vigilante mob on their way to murder Susquehannock Indians, a pamphlet war broke out in the City of Brotherly Love. Nearly a quarter of the seventy-plus pamphlets either excoriating or apologizing for the Paxton gang’s violence were printed on the press owned by Benjamin Franklin and operated by Armbruster. Did the latter then take a break from the ongoing provincial war of words to issue a transcendental warning to Philadelphians?

“These are the ForeBodings of the Creator, which go before Punishment”, a sky-born Youth in white proclaimed to the “Multitude” near Riga amid the thunderous lightning and apparitions of swords, snakes, and skulls. In the town of Kirschberg outside Gdansk, a three-day sail from Riga along the Baltic's southern shore, similar vengeful scenes were reported in the skies. For a full forty-eight hours the tempest’s fiery red clouds alternately closed and opened to reveal a cannon and swords, along with three angels enjoining citizens to quit their vice and unrighteousness or “GOD will punish you very quick.” 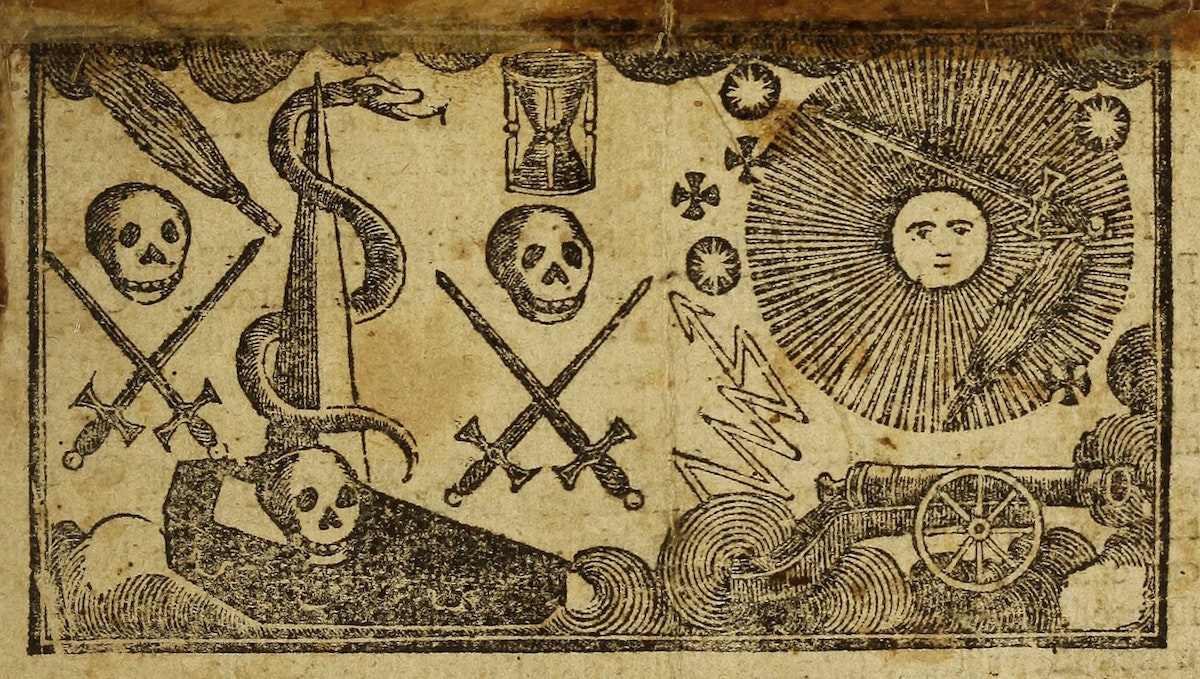 The particular Himmels-Zeichen — heavenly signs — illustrated in Armbruster’s translated and reprinted jeremiad were typical of seventeenth and eighteenth-century apocalyptic broadsides. But they would soon be on the wane, thanks to philosophes like Franklin who were making great strides in replacing the old Aristotelian meteorologia — the study of things on high, generated by both the four elements and divine intelligences — into Meteorology, the nascent quantitative natural historical science of weather. With his research into lightning, waterspouts, whirlwinds, and other weather events in the 1750s, Franklin had done more than anyone else to engender the shift from miraculous celestial signs to the laws of the gaseous atmosphere.

An avid practitioner of folk magic — especially the wildly popular divinatory pastime of “money digging” — Armbruster’s own allegiance lay squarely with the past. Stories were told of how the “Grand Master” (as he was known) had a “special charm for raising and laying the devil, and would frequently arise, at midnight, and spread out a large sheet of whimsical drawings which he possessed, and surround it with four or five candles.” In 1765, after a bitter election saw Franklin, a royal government advocate, tossed from the provincial assembly by disaffected German voters and while Pontiac’s War still raged on the western frontier, Armbruster published a broadside in German and English, An Account of a Surprising Phoenomenon, Which Appeared in the Sky at the City of Philadelphia and Different Parts of Pennsylvania, on Saturday the 2d. Of February 1765. Bearing a slightly reworked version of the 1764 woodcut, the broadside gave his own eyewitness account — “A Meteor appeared to the writer as if three armies were in conflict” — of the very local Himmels–Zeichen. Perhaps this time Armbruster’s prognostication was on the mark; just seven weeks after the “meteor” streaked through Philadelphia’s sky, the British Parliament and King George III issued the Stamp Act, setting in motion the events that would be known as the American Revolution.