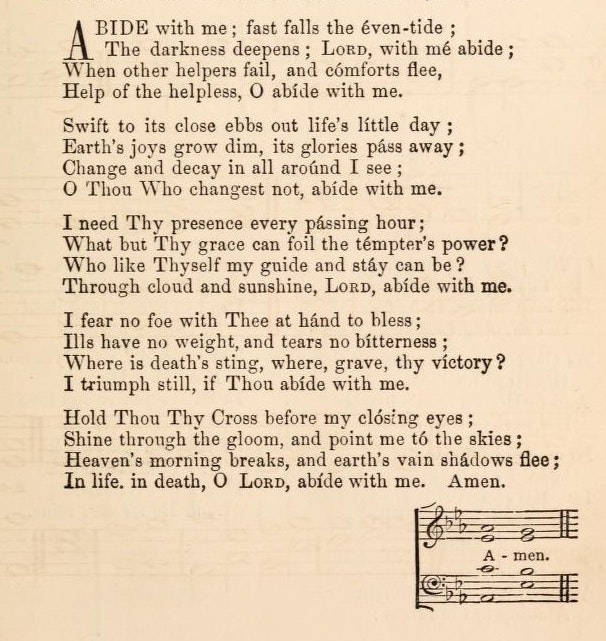 As the RMS Titanic sank, and thousands met their death, it is said the ship’s band played Abide with Me, a hymn written some 65 years earlier by Reverend Henry Francis Lyte. If true it would be an appropriate soundtrack, not only for the poignant content of the lyrics, speaking as they do of life's end, but also because it was finished as Lyte himself was meeting death, not in the icy waters of the north Atlantic ocean but from tuberculosis whilst holidaying in France.

There's some debate about when exactly the hymn was first begun. Some accounts say it was written in 1847, shortly after Lyte delivered his final sermon, before setting out for a therapeutic holiday in Europe in an attempt to cure his, by then, acute tuberculosis; others that it was written a quarter of a century earlier, and only rediscovered in a drawer as Lyte was packing for his trip. Likely is that it was a mixture of the two, the hymn's beginnings found in the drawer and substantially reworked that night and as he made his way through France (trying to get to Italy, which he'd never reach). Sending home to his wife his final revisions for the hymn while passing through Avignon, he died in Nice just three weeks later, in the Hotel d’Angleterre, and was buried in the nearby English Cemetery.

There was on odd symmetry perhaps to Lyte passing away on the French Riviera and in the rooms of a hotel with such a name. For the last 23 years of his life he had lived and preached in Brixham, one of the three small towns that together make up a stretch of the southern English coast known as the "English Riviera". His home was Berry Head House, a former military hospital (now hotel) situated a short distance from the Napoleonic fortifications which dot the promontory (overlooking the waters where the HMS Bellephron anchored in 1815 on its way to delivering Napoleon to St Helena). Curiously, in another fact of strange association, in the same notebook containing Lyte's final revision for Abide with Me was found a poem addressed to the French government protesting against the repatriation of Napoleon’s remains.

Although it was originally written to its own tune, the hymn is now almost exclusively sung to "Eventide", a melody composed in 1861 in just ten minutes by the organist William Monk, during what his widow recalled as “a time of great sorrow". "Hand in hand", she wrote, "we were silently watching the glory of the setting sun (our daily habit) until the golden hue had faded… Then he took paper and pencilled the tune which has gone all over the world.”

In this form — Lyte's words to Monk's music — the hymn has since become one of the most popular in the world, commonly sung in the trenches of the First World War, and by Nurse Edith Cavell the night before the Germans shot her for aiding British soldiers in their escape from Belgium. Since 1927 it has been played at every FA Cup Final, and just ten days after the 9/11 attacks in New York it was memorably played by a Salvation Army band at Ground Zero.

Of the many versions recorded over the decades we are featuring one from 1914 sung by Olive Kline and Elsie Baker for Victor records.