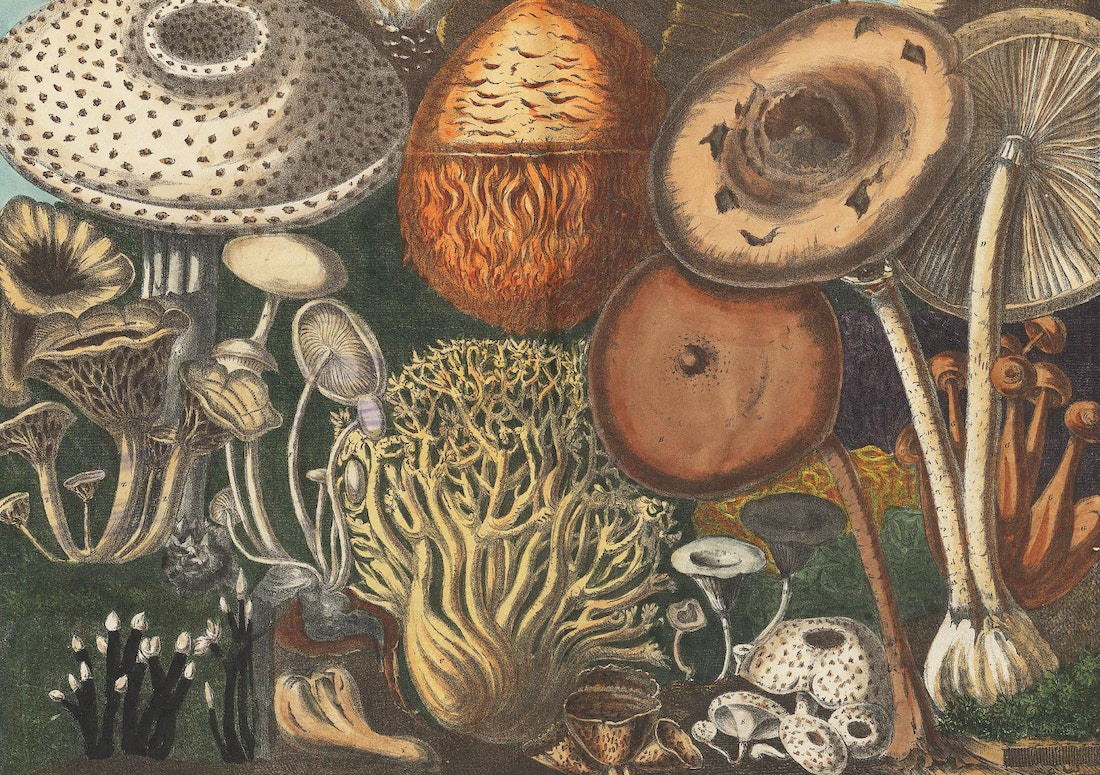 With the last sights of summer having now vanished for many in Europe and North America, you may find, among fallen leaves and soggy mulch, mushrooms erupting overnight. We present here lithographs by A. Cornillon from Michel Étienne Descourtilz’s Atlas des champignons: comestibles, suspects et vénéneux (Atlas of mushrooms: edible, suspect and poisonous). There are the somewhat tasteless specimens familiar from supermarket shelves, as well as rarer varietes: the chanterelles, displayed at giant scale, look particularly tempting, while a lovely orange lion’s mane appears like a bearded god with his hat pulled low. The “suspect” mushrooms feature common lookalikes. Fly agaric, for example, can resemble edible species of blushers (in the Agaricomycetes class). The latter mushrooms do well in a cream sauce; consumption of the former results in an unpredictable cocktail of symptoms — hallucinations, euphoria, and nausea, if lucky, seizures and coma, if not. The toxic toadstools speak for themselves and highlight the danger of mushroom hunting without adequate knowledge: 2020 saw hundreds poisoned in France due to misidentification.

On the topic of danger, Descourtilz himself led a curious life, working as a physician, botanist, and inadvertent historiographer of the Haitian Revolution. His 1809 Voyages d’un naturaliste chronicles, among other adventures, a trip from France to Haiti in 1799 in order to secure his family’s plantations. Despite having been issued a passport, he was arrested soon after his arrival by Jean-Jacques Dessalines, under Toussaint Louverture’s command, and only escaped death due to his medical training and the intervention of Mme Dessalines, the later Empress of Haiti: Marie-Claire Heureuse Félicité Bonheur. He spent four years in Haiti, serving against his will as a physician to the revolutionary forces. While he “was mindful to behave in a manner appropriate to the new economic and racial order”, writes Philippe R. Girard, Descoutilz remained highly critical of independence and in support of reconquest. For subsequent historians, Descourtilz’s observation of Toussaint offers a glimpse of the revolutionary leader’s writing practices and complex use of secretaries. But Descourtilz maintains a somewhat abrasive tone throughout his travelogue. “Profoundly self-centered”, writes Jeremy D. Popkin, “Descourtilz judged those he encountered largely in terms of how they treated him personally”. He returned to France with his worldview largely unchanged — eager to practice medicine and seek out mushrooms.