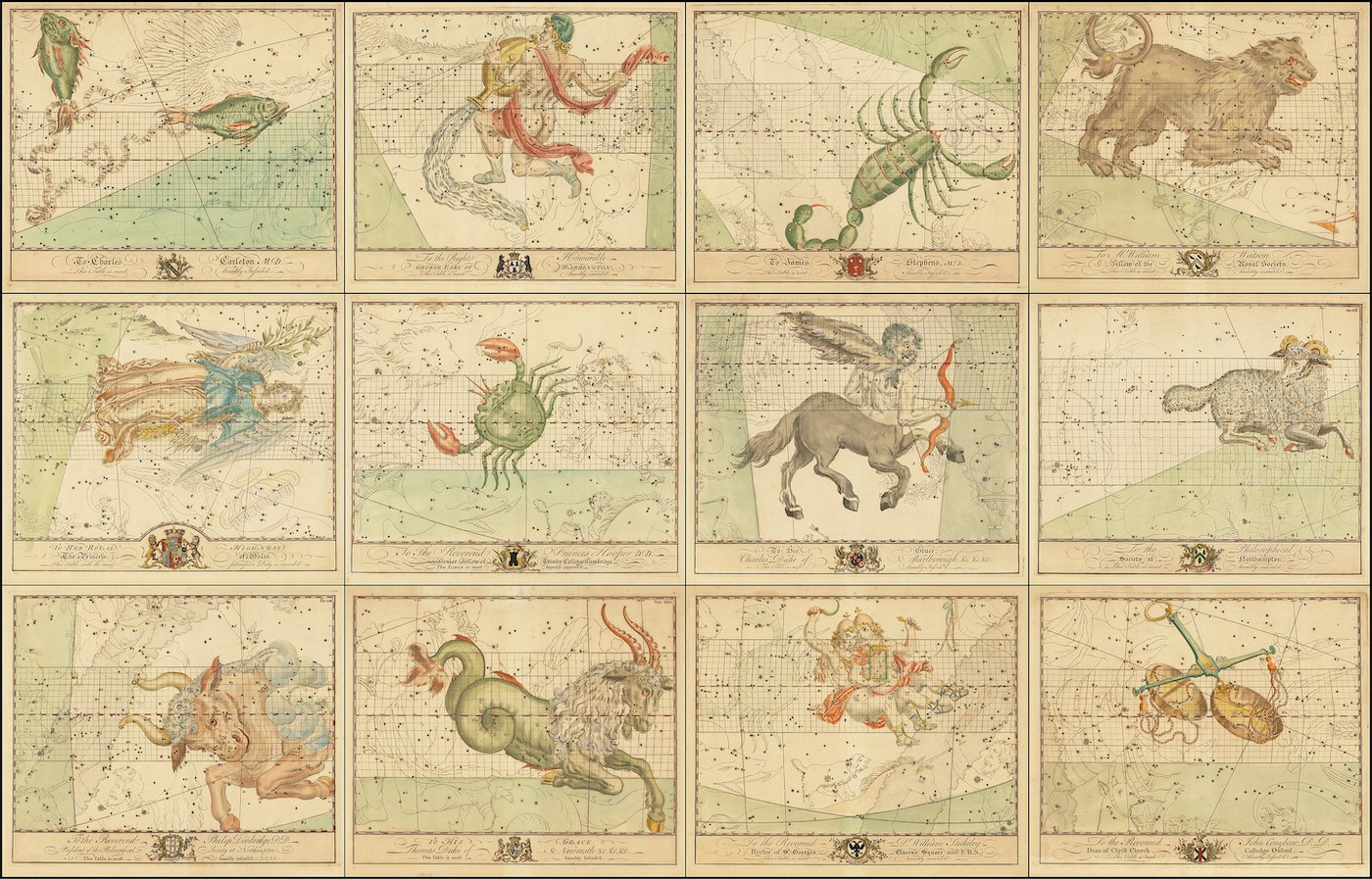 In 1748, scientific instrument maker John Neale advertised the sale by subscription of a new “exact Survey of the Heavens”. It would offer not only “all the fix’d Stars hitherto observed in any Part of the World”, but also two planispheres of the Ptolemaic constellations and a historical account of the asterisms, “from the earliest Antiquity to the present Time”. The atlas relied on the work of Dr. John Bevis (1695–1771), a London physician who had devoted a year of his life to recording the nightly transits of stars from his observatory in Stoke Newington. Documenting faintly luminous entities down to the eighth magnitude, he added to those already cataloged — by John Flamsteed’s 1729 Atlas Coelestis and Edmond Halley’s southern hemisphere observations — for a total of 3550 stars.

Best known to historians of astronomy for discovering the Crab Nebula (depicted in Taurus), Bevis contributed papers on eclipses and comets to the Philosophical Transactions of the Royal Society, making strides toward establishing the configuration and scale of the solar system, and helping to account for apparent irregularities in the motions of the moon and planets. At a time when the accurate measurement of longitude was of paramount importance to imperial British navigation, Bevis played a prominent role in the assessment of contending claims.

Its size better suited than previous mammoth atlases for use with a telescope, the ambitious Uranographia was positioned to become astronomy’s state-of-the-art geographical guide to the heavens. The first atlas to use only English (not Latin) names for all the constellations, it may have also been the first to depict Uranus, and demonstrated scientific innovation through its representation of “not-so-fixed-stars”. Along with its astronomical significance and artistic beauty, Bevis’ Uranographia marks an important watershed in the history of celestial atlases: it was among the last to show allegiance to the old animated mythology of the heavens. Though a thoroughly modern astronomer, Bevis still adhered to the classical constellation figures in all their graphic glory. Johann Bode’s 1801 Uranographia largely copied Bevis’ depictions, but his representation of a new constellation, Globus Aerostaticus, as a Montgolfier balloon was a harbinger of ancient star worship's full displacement from the scientific field.

In 1750, John Neale went bankrupt and the unreleased Uranographia Britannica was sequestered for decades by the London Court of Chancery. Had the atlas reached its subscribers, whose names appear in dedications below each plate, the Uranographia Britannica would have been one of the greatest working star charts produced during the Golden Age of the Celestial Atlas. Although Bevis was widely admired in British scientific circles as a sanguine gentleman, it was said that “he never again referred to his great atlas without showing a deep and bitter sense of loss”. Bevis died tragically in 1771, after falling from his telescope while measuring the Sun’s median altitude.

Below you can browse, thanks to Wikimedia Commons, twelve hand-colored zodiac constellations from Uranographia Britannica. A complete, uncolored edition — featuring the forty-eight Ptolemaic constellations, two planispheres, and a chart of the southern constellations — is available courtesy of Linda Hall Library.