Hieroglyphics of a Rope-Dancer: The Book of Fate (1822)

On July 4, 1822, in the midst of London’s most pronounced season of both Egypto- and Napoleonomania, there appeared in bookshops on the Strand, Piccadilly, and Fleet Street a most curious artifact: The Book of Fate: Formerly in the Possession of Napoleon, Late Emperor of France, and Now First Rendered into English from a German Translation of An Ancient Egyptian Manuscript, Found in the Year 1801, by M. Sonnini, in One of the Royal Tombs, Near Mount Libycus, in Upper Egypt. Authored by Herman Kirchenhoffer — Fellow of the University of Pavia, Knight Grand Cross of the Annunciade of Sardinia, and Chevalier of the Legion of Honour — the book featured a large foldout table of “Hieroglyphical Indications of the Planets”, a grid of symbols that were the intermediate key to deciphering answers to thirty-two rather homely “oracular” questions, such as: Shall I live to an Old Age? Shall I ever be able to retire from business with a Fortune? Will my Beloved prove true in my absence? Are Absent Friends in good health & what is their present employment?

A minor sensation deemed a work of “great ingenuity” in the Gazette of Fashion, by November it had spawned a much less ingenious knock-off, London astrologer Robert Cross Smith’s The Philosophical Merlin, whose subtitle echoed and extended the Book of Fate’s extravagant claim of imperial provenance: The Translation of a Valuable Manuscript, Formerly in the Possession of Napoleon Buonaparte, Found Amongst Other Valuable Papers, in His Cabinet, At the Battle of Leipsic; Known to Have Been Highly Prized by Him, and Consulted for the Choice of His Generals.

The Book of Fate sold briskly, seeing a dozen editions before 1840, and another dozen abridged editions — including translations into Spanish and Italian — under various titles before 1923, when pornographic book purveyor H. S. Nichols brought out a facsimile edition of the 1822 work. As sailor Jack Blunt’s much-consulted Bonaparte Dream Book, it had a cameo role in Herman Melville’s Redburn (1849). Although one reviewer had called it an “innocent hoax” as early as 1823, it remains in print, now masquerading under such monikers as Napoleon's Book of Fate: Ancient Egyptian Fortune-telling for Today (1988); Napoleon's Lucky Dream Book: A Book of Fate (2005); and Napoleon's Book of Fate and Oraculum (2010). 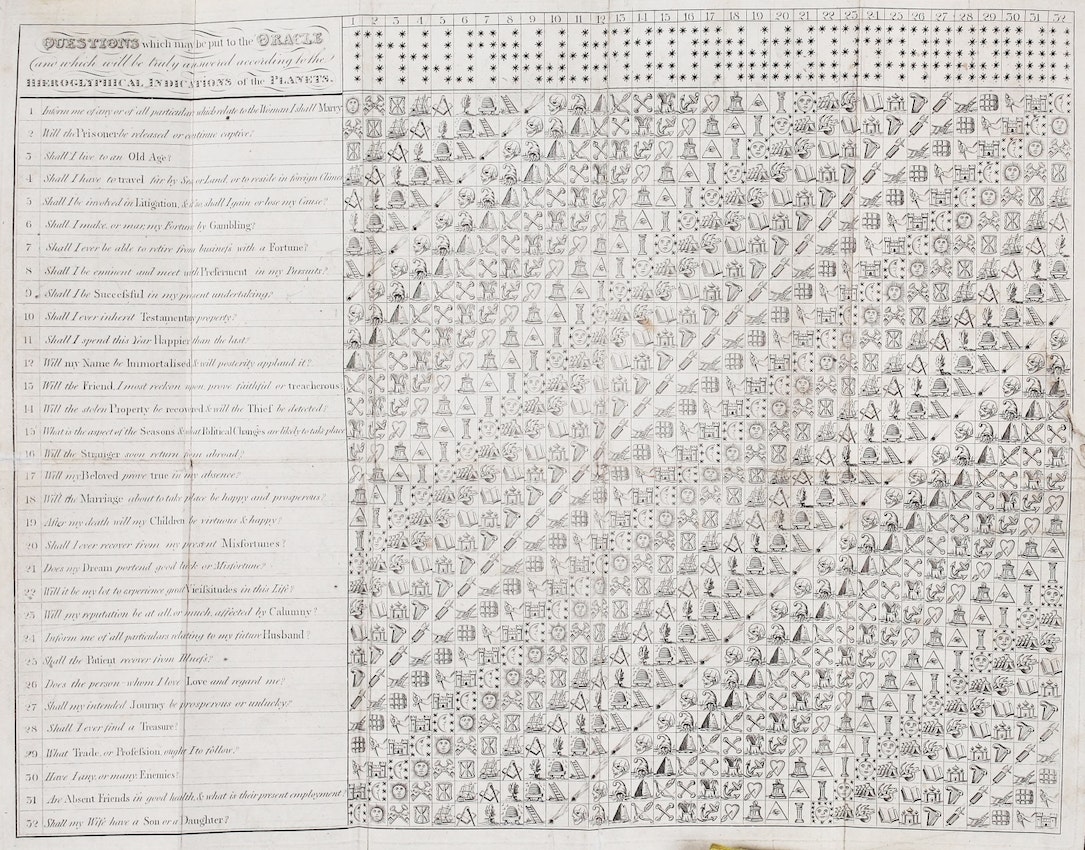 While the image of an astrologer Bonaparte, plotting his battles by means of “hieroglyphic indications”, is intriguing, the book was indeed an “innocent hoax”. There never was a “Herman Kirchenhoffer”, nor were any of his august affiliations genuine. The book’s account of discoveries in the tomb at Thebes was cribbed from Louis-Madeleine Ripault’s Report of the Commission of Arts (1800), its historical dissertation on Greek oracles plagiarized from Abraham Rees’ 1810 Cyclopedia and a pair of contemporary sources. The divinatory chart’s “hieroglyphical indications” were all crude freehand renderings of well-known Freemasonic symbols, its oracular interrogatories paraphrasings of the questions posed by a century-long tradition of French jeux divinatoires — cartomantic devices played mostly by young women. “The Writing of Balapsis, by Command of Hermes Trismegistus, Unto the Priests of the Great Temple”, which seguéd seamlessly into elaborate instructions on “How the Enquirer Shall Obtain a True Answer to the Question Which He Putteth to the Oracle”, was pure invention, laced with hijinks such as advising the reader that he might substitute “a pen dipped in common ink” for the reed dipped in blood by the ancient Egyptian priests, and forego confining consultation of the Oracle to eclipses of the Sun and Moon. The book’s explanation for its language — that the idiom of its 1024 “moral axioms” sounded more English than Egyptian because of some universal philosophical convergence — was purely tongue-in-cheek, as were not a few of those oracular answers:

Avoid entering into the land of strangers.
Preserve the greatest equanimity at the gaming table.
Avoid edge–tools!
Yes!

From its cleverly constructed provenance, which passed the papyrus through no fewer than nine separate hands, to its heartfelt dedication to the Empress Marie-Louise (one of the invented owners), nearly every single page of The Book of Fate bore the sly signature of a master prevaricator. Its hallmark was prodigality: the author clearly unable to help himself from fabricating fancies as glibly as its thousand-plus proverbs. 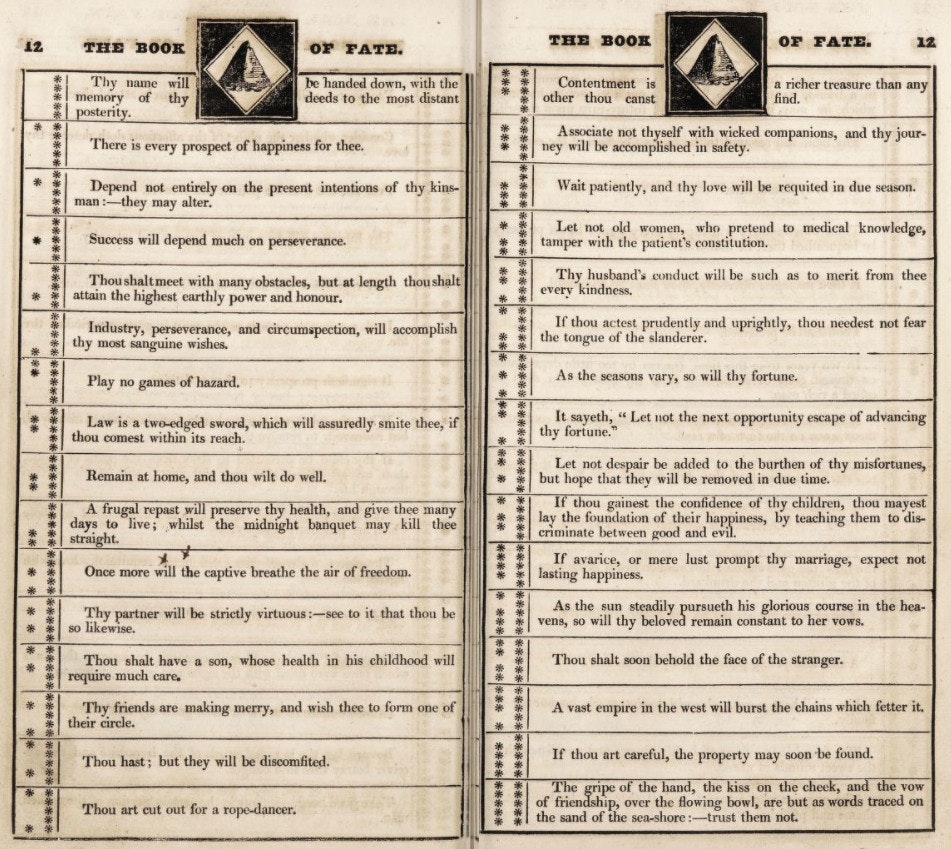 Of the three other books published by this author in 1822, The Napoleon Anecdotes: Illustrating the Mental Energies of the Late Emperor of France, and the Character and Actions of His Contemporary Statesmen and Warriors ran to five volumes, The Maid of Orleans Or la Pucelle of Voltaire Translated Into English Verse with Notes with Notes, Explanatory, Critical, Historical and Biographical occupied two, while the third, France for the Last Seven Years, or, the Bourbons was a mere 424 pages long. Though each bore the author’s name, William Henry Ireland, he had in previous years penned books as “Charles Clifford”, “I-Spy-I”, “Flagellum”, “Aere Perennius”, “H.C.”, “Cervantes”, “Satiricus Sculptor, Esq.”, “Anser Pen-Dragon, Esq.”, “Louis Bonaparte, King of Holland”, “Thomas Fielding”, “Henry Boyle”, and — for Something Concerning Nobody (1814) — “Somebody”. In 1828, as “Baron Karlo Excellmanns”, he wrote yet another paean to his beloved “First Consul”, The Eventful Life of Napoleon Bonaparte: Late Emperor of the French. Despite having written, under his own name, four successful Gothic novels and a four-volume Life of Napoleon Bonaparte (1828) illustrated by George Cruikshank, when he died in 1835, the author was still widely and derisively known as “Shakespeare Ireland” — a nickname he had earned after confessing to forging a cornucopia of spurious Shakespeare creations, including Vortigern and Rowena, which was produced at Drury Lane Theatre in 1796.

Present-day scholars routinely dub Ireland a “forger” who in the wake of his youthful Shakespeare prank, committed at the age of nineteen, was condemned to a life as a “Grub Street hack”. I prefer to think of him as the real life literary version of Bartolomeo Oranzi, a character from his own 1808 novel Rizzio: Or, Scenes in Europe During the Sixteenth Century, whose funambuliste caperings — leaping thirty feet above the street to pass through a hoop and seize a stout brass ring — Ireland pronounced “the most extraordinary feat I have ever seen performed”. “Thou art cut out for a rope-dancer”, reads one of the thirty-two hieroglyphical indications under the sign of the pyramid. Surely William Henry Ireland, aka Herman Kirchenhoffer, was in that one oracular pronouncement signing his own name.

Below, you can examine a 1797 satirical etching, of the Ireland family as forgers, courtesy of the Folger Shakespeare Library (the nineteen-year-old William Henry sits before the fire reading a children’s chapbook). 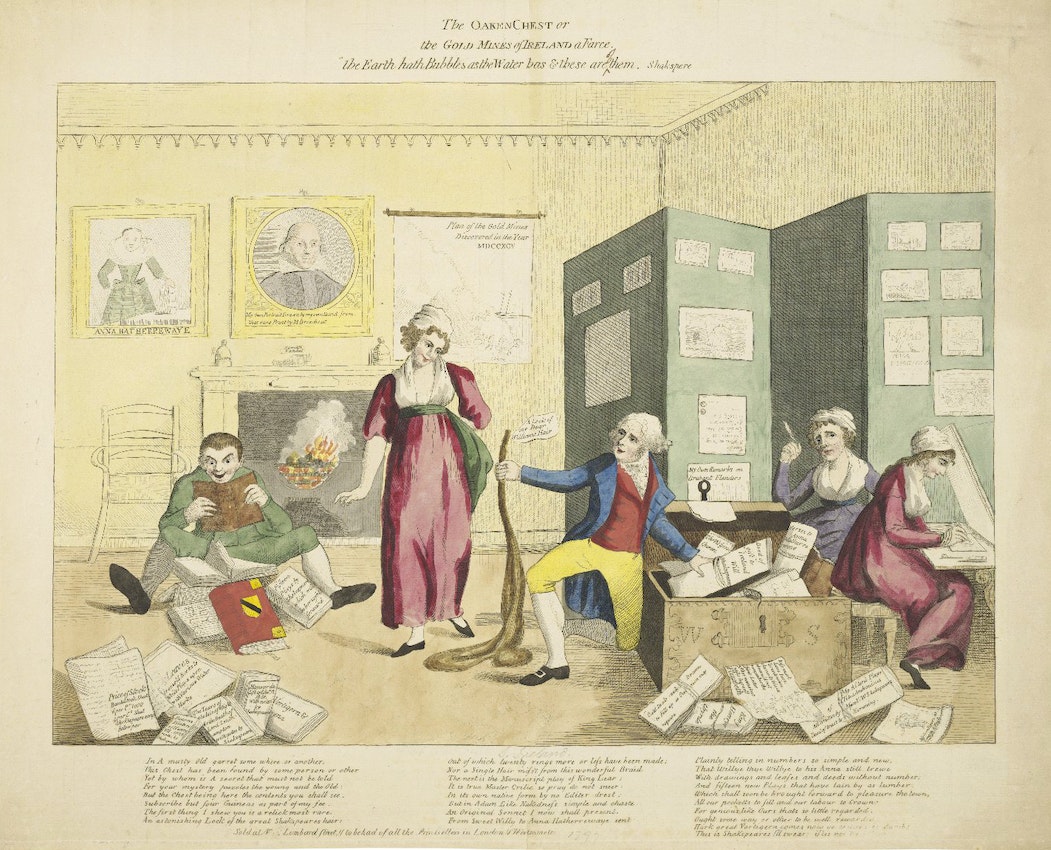