A message in a bottle? Sure. A five-masted model ship, running downwind, enclosed within a flask? Difficult, but it can be done. What about a lithe harlequin, squeezing himself into a jug? That must be an impossible feat . . . right? Scheduled to appear at London’s Haymarket Theatre in January 1749, the Bottle Conjuror promised exactly this: not so much an act of conjuring, but a feat of human condensation.

The Bottle Conjurer was less of an illusionist’s event, the event more an illusion in itself. John Timbs sets the scene in Romance of London (1865), his remarkable three-volume collection of “strange stories” about poisoners, corpse burglars, the cudgeling of John Dryden, and, of course, The Bottle Conjuror. According to Timbs, this ruse arose from bored nobility, the Duke of Montagu and Earl of Chesterfield, debating the gullibility of fools. “‘Surely’, said Lord Chesterfield, ‘if a man should say that he would jump into a quart bottle, nobody would believe that!’” The Duke disagreed and so they put out a public notice, advertising that the performance was to be held where a person would “get into a tavern quart bottle, without equivocation, and while there sing several songs, and suffer any spectator to handle the bottle”. As if this was not intriguing enough, they claimed that the conjuror could play the sound of every instrument in the world through a simple walking cane, and raise the dead, for the purposes of polite conversation.

Tickets were bought, hats and coats were checked at the door, and the Haymarket brimmed with an anticipatory audience. They sat for roughly an hour, according to Barbara M. Benedict, staring at an empty vessel on an unadorned table. Momentarily diffusing the collective tension, an audience member shouted that he would squeeze himself into a beer mug if paid double the price of admission. Guffaws resounded, but this jubilation quickly spiraled into rage when the house proprietor finally revealed that the evening’s promised entertainment had vanished into thin air (along with the audience’s possessions from the cloakroom, claims Benedict). 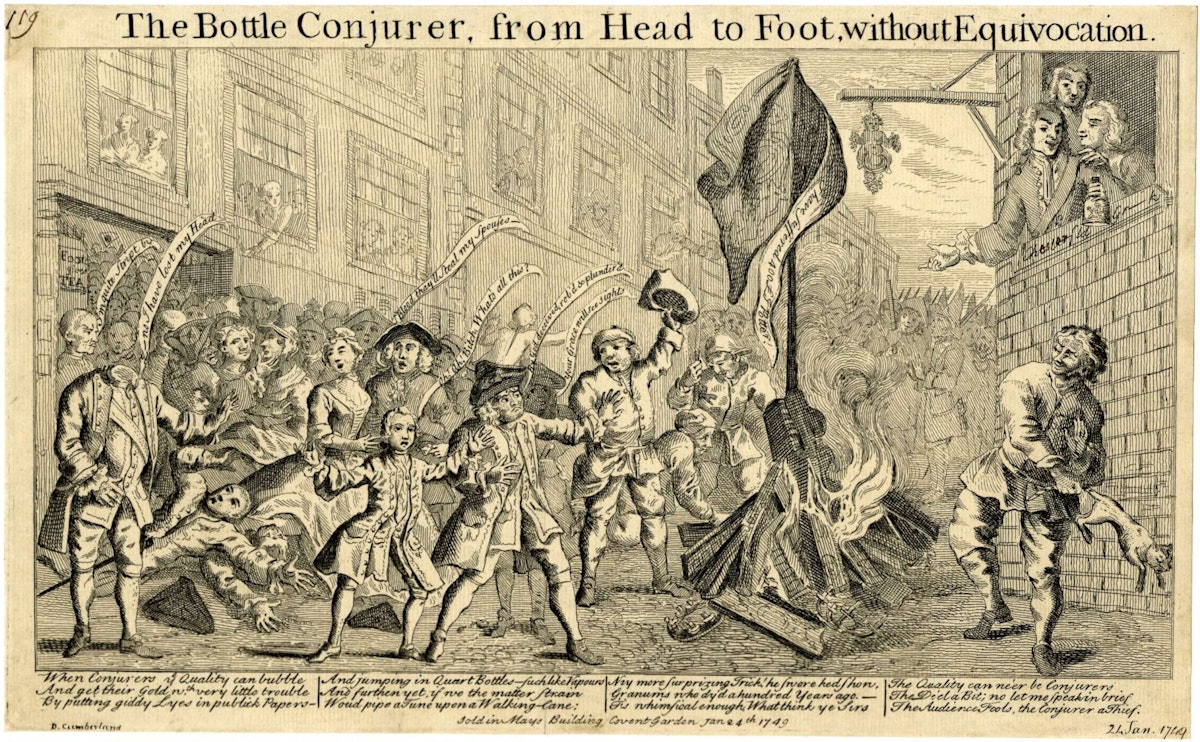 “The Bottle Conjurer, from Head to Foot, without Equivocation”, featuring details borrowed from Hogarth, 1749 — Source. 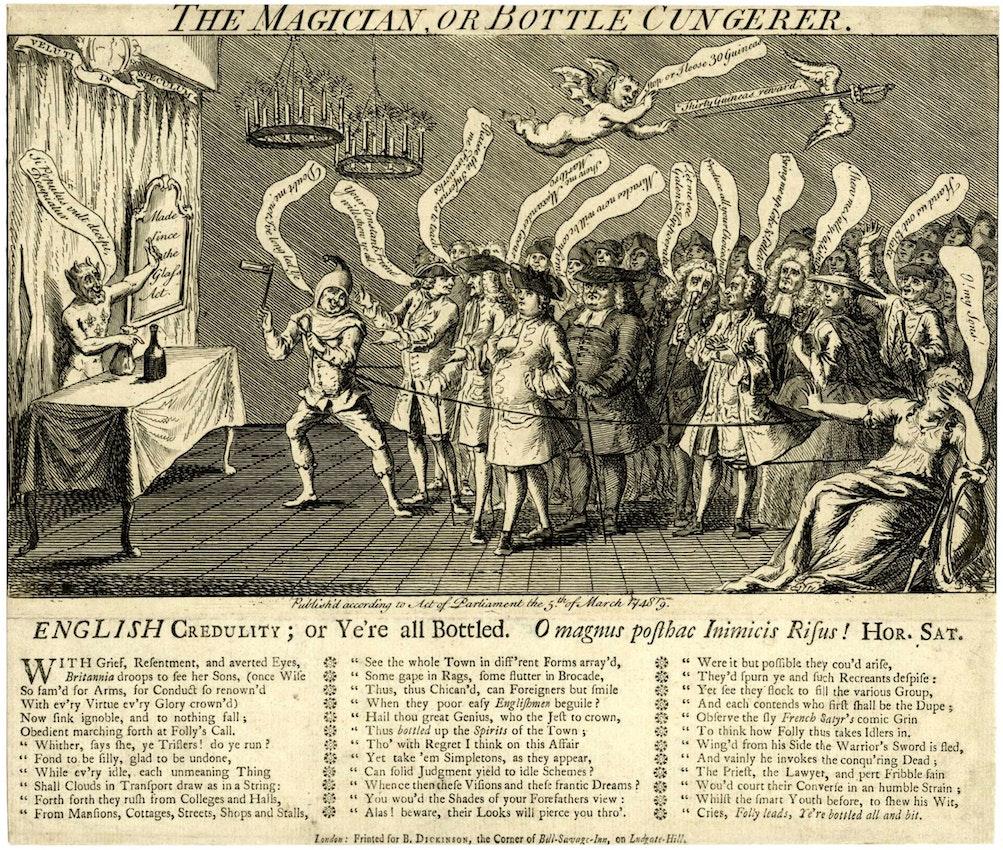 One thing is certain: the crowd rioted, tearing up benches, destroying the sets and scenery, and dragging whatever possible out onto London’s streets, staging a bonfire, with the theater’s curtain hoisted as a kind of victory flag. The event was not without humor: tricked by his own social class, the Duke of Cumberland (son to the King) was particularly enraged and drew his saber, intending to charge the bottle, only to be quickly disarmed. Quoting a letter sent by “a Scotch Jacobite lady”, Timbs ribs the Duke: “Fools should not have chopping-sticks”.

Conspiracy theories proliferated. Some claimed that the Bottle Man had been ready to perform, but, as a warmup, decided to demonstrate the illusion in the theater’s green room to a potential patron. He soon found himself corked and kidnapped. William S. Walsh relates the story in his Handy-Book of Literary Curiosities (1892):

Thus the poor man being bit himself, in being confined in the Bottle and in a Gentleman’s Pocket, could not be in another Place; for he never advertised he would go into two Bottles at one and the same time. He is still in the Gentleman’s custody, who uncorks him now and then to feed him; but his long confinement has so damped his Spirits that instead of singing and dancing he is perpetually crying and cursing his ill Fate.

Alongside the numerous parodies and satires that arose in the wake of this hoax, many of the “facts” remain historical conjecture. The Duke of Montagu and Earl of Chesterfield were not credited as authors of the prank until twenty-three years after the event. And other sources swap Montagu for the Duke of Portland. Stranger still, an associate of Montagu, Dudley Bradstreet — a famed government informant during the Jacobite uprising — claimed to have retired from tradecraft into bottle conjury, taking credit for the hoax and going so far as to pen a play about his exploits. (An extensive history in an 1831 issue of Gentleman’s Magazine outlines Bradstreet’s claim.) The bottle hoax reflected other satires. Notably, a series of etchings featuring “Don Jumpedo”, who one-ups the Bottle Conjuror by jumping down his own throat. 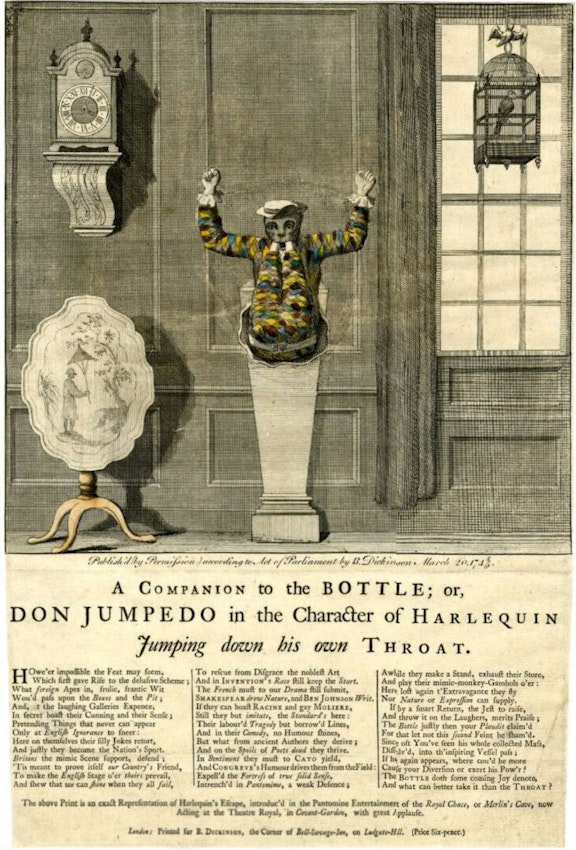 Print published by Bispham Dickinson, “A Companion to the Bottle; or, Don Jumpedo in the Character of Harlequin Jumping down his own Throat”, 1749 — Source.

Featured above for your perusal is a mysterious pamphlet that appeared in the same year as the Haymarket Theatre debacle: A Modest Apology for the Man in the Bottle. Its author, who signs the pamphlet as “The Bottleman”, blames the event on his loss of work to an immigrant labor force, claiming that he staged the “Stratagem” for profit, as a desperate attempt “to keep the Wolf from the Door”. He longs for a patron of the arts, but has little artistic talent. Were he an “Italian Singer”, fiddler, or dancer, there would have been no need for the bottle. And, after much self pity, The Bottleman rebuts critics who have compared him to the “Son of Satan or Satan himself”, describing the failings of government, taxation, and foreign relations as much worse evils. The most plausible explanation offered is that it was, simply, the wrong bottle: “my Intent was to please the Audience in a very, very large Bottle”. The writer explains that he had practiced the act for years, only to find himself sabotaged by a vase.

The apology, in other words, is anything but . . . and occasionally decays into raving speculations that take the form of Schrödinger-like thought experiments: “the only Question will arise is, Whether I was, or was not in the Bottle?”, to which the anonymous author asks us to consider a third option: “Whether I am not in the Bottle still. . .?” In a sense, the Haymarket hoax had a metaphysical quality akin to paradoxes like “the Kilkenny cats”, who consume each other whole, leaving only their tails behind. Promising vanishment, the very event vanished before its eager audiences’ eyes, leaving a history of dubious tales and half-truths in its void. 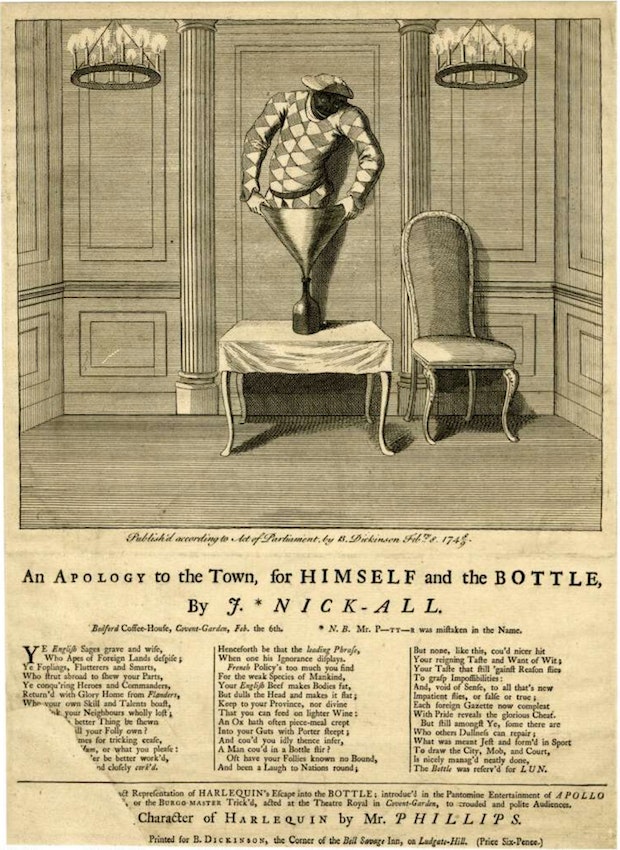 A broadside published by Bispham Dickinson, depicting “Harlequin’s escape into the bottle”, 1749 — Source.